“There were many points at which I thought we were all going to die,” admits Dave Bayley, vocalist and frontman of English indie pop quartet Glass Animals. He’s referring to a two-week trip to Mexico for a wedding at the tail end of 2015, and his tone suggests he’s only half-joking.

This trip was the only real break that Bayley, guitarist Drew MacFarlane, bassist Edmund Irwin-Singer, and drummer Joe Seaward had taken since the release of their massive debut record, Zaba, in 2014, and it was an eventful one for all the wrong reasons. While those two weeks were filled with accidental weddings, police bribery, and other shenanigans, it’s not the first time the four Brits have found themselves in trouble — they also have stories about getting stalked by a naked homeless man in San Francisco and seeing a woman get tasered in Detroit.

It’s difficult to reconcile such hilarious tales with the stark and understated sounds of Zaba, but the Oxford-based group’s forthcoming sophomore album, How To Be a Human Being, seems more in line with their actual selves. When I join the four twentysomethings for a walk around Tompkins Square Park in Manhattan’s East Village, they treat me to what seems like an endless barrage of stories from their last two years of touring. Later, over lunch at a dizzying Bangladeshi restaurant lit up by thousands of low-hanging, multicolored Christmas lights, they share even more off-the-cuff anecdotes that informed How To Be a Human Being.

It soon becomes clear that nearly every person Glass Animals met over the course of the last couple of years appears on their new album, whether in the characters Bayley sings about or in the recorded conversations that function as interludes between songs. The frontman’s lyrics have become remarkably more personal, and they stand out as the biggest difference between How To Be a Human Being and Glass Animals’ debut.

Raising his voice to be heard over the restaurant’s thumping Bollywood soundtrack, Bayley talks excitedly about all the different people, places, and perspectives that appear on the band’s new album. One of those perspectives is his own, of course — it’s just hard to pick it out from the crowd. 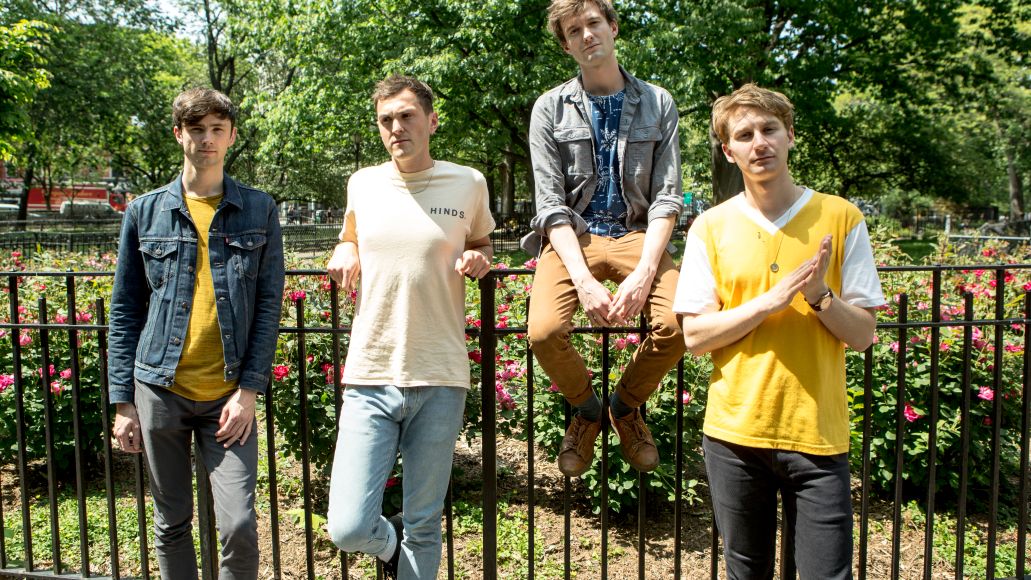 “It’s different in each song,” he explains. “Each track on the record is a different character. We’ve met so many weird people while touring and heard so many totally nuts stories, you end up spending some time sitting in the airport and people-watching.

“You start doing that thing when you’re like, ‘I bet they live with their mom or have a 75-year-old girlfriend even though they’re 18,’” he elaborates. “You just do all of these weird things in your head and make these weird stories. It’s a combination of making up stories, real things that we’ve heard, and autobiography. You create a character for each song.”

“But is that character ever you?” I ask.

“You won’t tell me which one, will you?”

“No. There’s bits of every character that’s personal. There’s always a bit of autobiography in that. Every time you tell a story, you put an element of you in it.”

While he won’t reveal which songs are truly autobiographical, Bayley does admit that some deal with subject matter from his own life. “There are songs on this record that I can hardly listen to,” he says. Later, he even predicts that some tracks will be tough to sing live: “I don’t know how it’s going to turn out — we haven’t tried it. I have no idea if I’ll be able to sing some of them.” Again, he refuses to reveal the exact songs he’s referring to, but the takeaway is that this is a different kind of record for Glass Animals. There weren’t any songs on Zaba that Bayley felt uncomfortable performing. 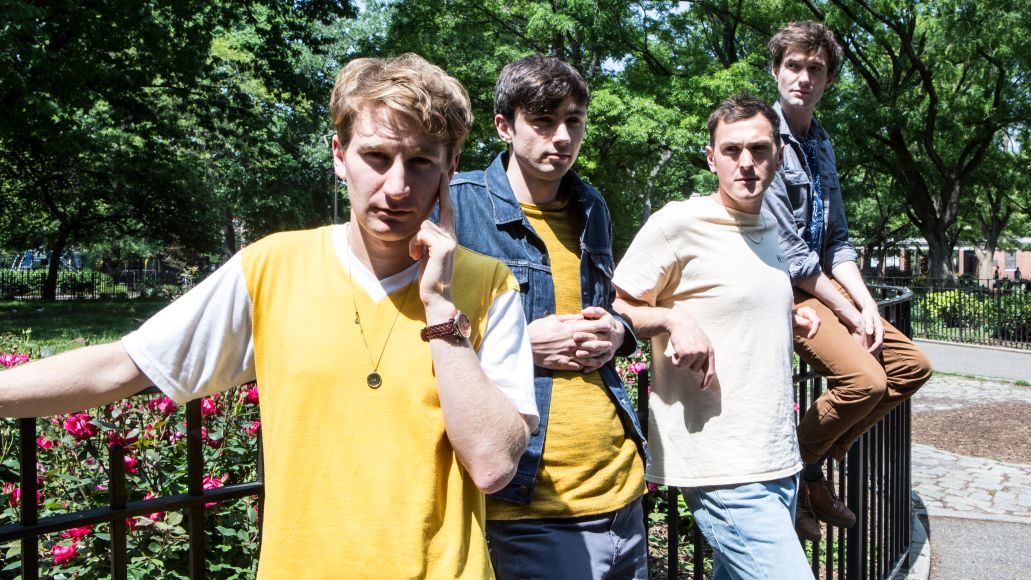 The band recently performed a short set in Brooklyn’s eccentric House of Yes, where they played only three songs off their upcoming record: “Life Itself”, “Youth”, and “Season 2 Episode 3”, a track whose beat sounds like it could just as easily fit on a Chance the Rapper track. It’s unclear if any of these three songs are the ones Bayley says are the extremely personal ones, but if so, he didn’t show it.

While MacFarlane, Irwin-Singer, and Seaward joke about being unprepared to play the new material and constantly make fun of Bayley for forgetting lyrics onstage, there’s a definite understated confidence and camaraderie driving Glass Animals these days. They’ve even begun to embrace the nerves leading up to their upcoming tour. “It’s exciting,” Bayley says. “It needs to be good, and that’s the pressure — we want to be as good as we can. It’s also really exciting to have something new to build.” With Zaba having already established a high benchmark for them to meet, they know they’ll be expected to to bring it each and every night.

That doesn’t seem like it will be a problem. Truth be told, Glass Animals never really stopped building their live set — they even made it a point to keep changing it up years after Zaba’s release. “If someone came and saw us a year after they saw us on the same album tour, it’d be different enough,” says MacFarlane. “We’d have added in some crazy sections.”

How To Be a Human Being is a logical next step for the group musically, and their reinvention is obvious in stomping, globe-trotting lead single “Life Itself” and throughout the album. Though they incorporate the best parts of the band’s live tinkering, these songs will sound like a big departure for anyone who hasn’t caught Glass Animals on tour in the last couple of years.

While Bayley’s falsetto and Seaward’s experimental percussion remain as vital as ever, How To Be a Human Being features much more live instrumentation, including the fuzzed-out electric guitar riff on “Poplar St”, the video game-like keyboards on “Season 2 Episode 3”, and the outro of “Take a Slice”, which sounds more like a Jack White guitar solo than the detached, synthetic textures of “Gooey”, “Toes”, and the rest of Zaba.

All of this makes perfect sense, especially since the new album was largely written directly after coming off a long tour last December. With the energy of live performance fresh in his mind, Bayley went straight to a studio and wrote nearly the entire album in just two weeks.

“All the vocal lines, the chords, the sketches of the production, the sounds, and the beats were kind of there,” he recalls. “We spent the next few months ironing it out and putting some new parts in.” He continues: “We had time because the writing happened quickly. We changed keys of some songs to see if it worked, completely stripped it back in some and later went back to the old versions. [We] just fucked around for four months.”

The result of all that fucking around — which included experiments with rhythm and field recordings of other interesting sounds — plays like an incredibly tight pop record. Each song flows musically as well as thematically, leading to a succinct collection of tracks that speaks to the band’s newfound willingness to embrace their own humanity. 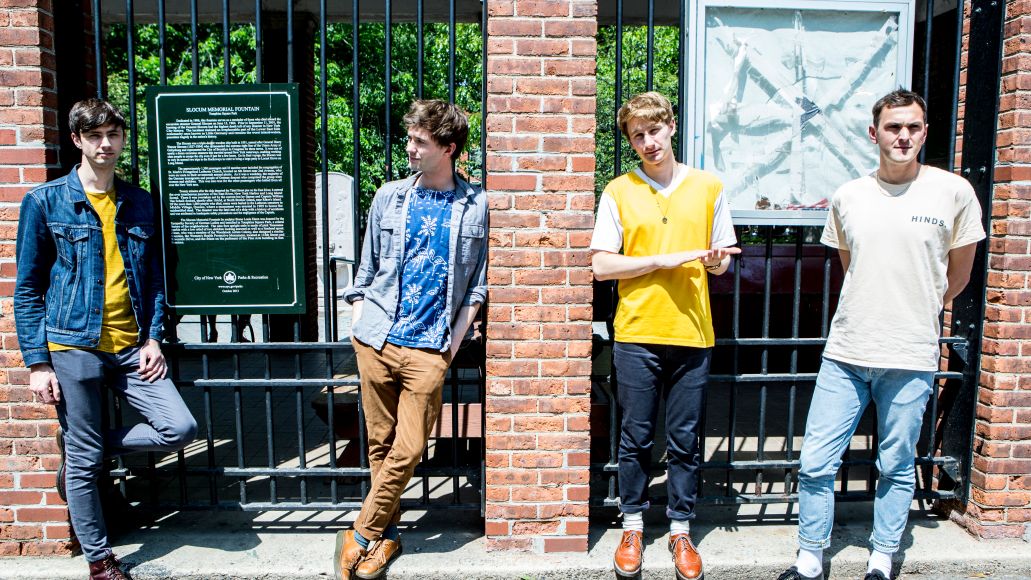 Speaking of “Life Itself”, Bayley describes the opening track and lead single as being “in a weird way about someone coming out into the world. It’s a little bit about naivety, almost becoming a real human being.” The record’s closing track, “Agnes”, takes a different approach. “[It’s] about the opposite of that, which is someone leaving the world,” explains Bayley. “That’s how we chose the bookends. Everything in between is what happens in life.”

That “in between” is reflective of each story the four bandmates told over the course of our lunch in the East Village’s most bizarre restaurant. Every interaction on tour or in between — the good and the bad — is present on How To Be a Human Being. You could even say it constitutes the core of the record.

“Making that first record, we had no bloody clue what we were doing in the music industry, how to make music, or how to play it,” Bayley remembers as we wrap up our lunch date. “Then you spend two years on the road, meeting all of these crazy people doing these crazy things — meeting people who throw up and get tasered, people who get in fights…” he trails off. “All of this crazy shit happens to you, and you crash into reality. You’re not sitting alone in your bedroom in Oxford anymore.”

Humans After All: A Conversation with Glass Animals