As the crowd mingled on the floor, a buzz of anticipation filled Bankers Life Fieldhouse in Indianapolis. Kanye West would at last bring The Life of Pablo to life for a new concert experience.

And the fact that it took this long to take the stage in the States wasn’t for lack of trying. West’s headlining spot at GovBall was canceled after a severe storm scare, and his attempt at a low-key show later that night at Webster Hall caused thousands of Yeezy fans to swarm the East Village. (’Ye did make a surprise appearance at MetLife Stadium that same day as part of the G.O.O.D. Music Showcase for Hot 97’s Summer Jam, but this was his first true solo performance since he headlined Paradise International Music Festival in the Philippines.) 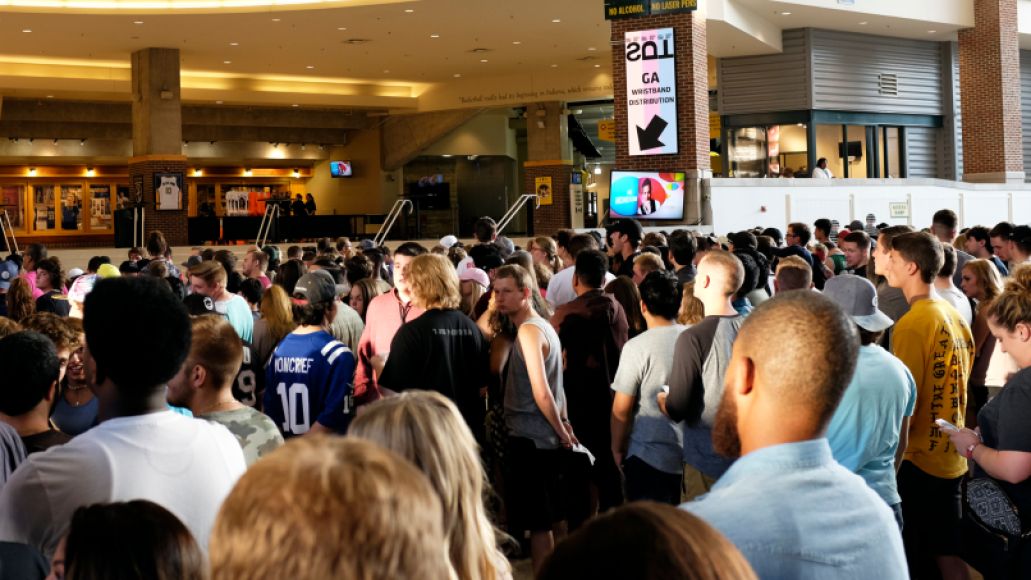 Expectations were sky high for me: I last saw Kanye perform a masterful homecoming set at Chicago’s United Center while promoting Yeezus, followed by a pared-down headlining spot at Made in America in Philly.

Those two gigs are perhaps unfair reference points to this tour opener. As these shows continue, I’m sure ’Ye will further refine his setlists and performances. This gig was a little rough around the edges, but even West openly admitted to this during the set. A few minor issues: The bass was too turned up on “Freestyle 4” (so much that I could feel my brain rattling around my skull); “Ultralight Beam” was written on the setlist but not performed; and “Fade” was an anticlimactic closer, which lingered a bit too long before the house lights turned on.

Overall, this was an immensely satisfying concert that ran the gamut of Kanye’s collaborations, a ton of other TLOP tracks, a handful of deep/older cuts, and an assortment of hit singles. Most notably, Kanye utilized a levitating stage that glided throughout the arena, allowing him to engage with fans everywhere. (Security had the difficult task of trying to constantly clear the space directly beneath the stage, which proved futile over the show’s two hours.) It was paired with a massive, rectangular lighting rig, which similarly tilted and contorted for a variety of effects throughout the set. 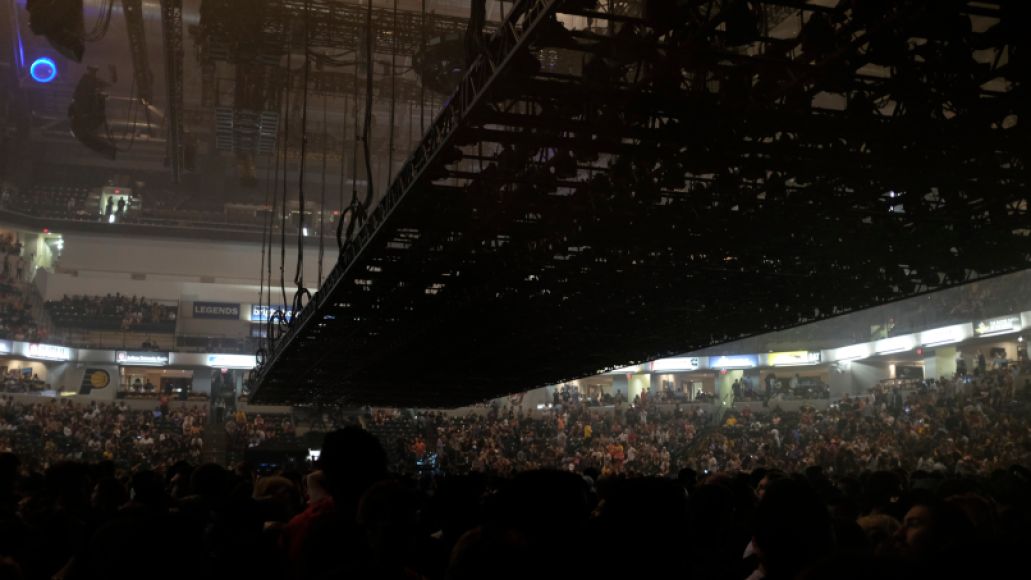 The setup wasn’t as theatrical or grandiose as his mountain or intricate masks during the Yeezus tour, but it was effective nonetheless to get an entire stadium hyped. The elevated platform also showcased two sides of Kanye’s persona: The god-like figure that towers over his devotees and the hip-hop community as a whole vs. the humble man of the people, eager to give himself to the fans. And for over 30 tracks, West impressed in both the quiet and the dynamic moments.

Yeezy season has finally arrived, so relive the 10 best moments of the Saint Pablo Tour kickoff. 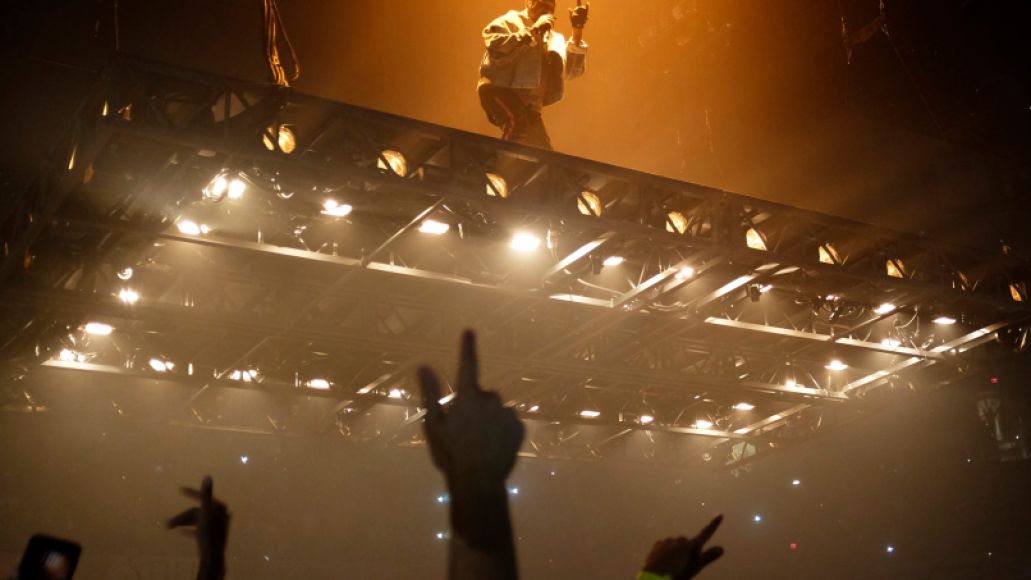 After getting the crowd moving with his ScHoolboy Q collaboration “THat Part”, ’Ye jumped into a couple of his biggest G.O.O.D. Music singles. The stage tilted precariously as West laid down while performing “Mercy”. And the energetic Chief Keef cover “I Don’t Like” followed. West is worth the price of admission, but despite the proximity of Indianapolis to Chicago and the secrecy of an opening act – there was none – no other associates appeared outside of Travis Scott. I wouldn’t be shocked if some of the bigger city stops (L.A., NYC, Chicago, Toronto) include some surprise guests, though. 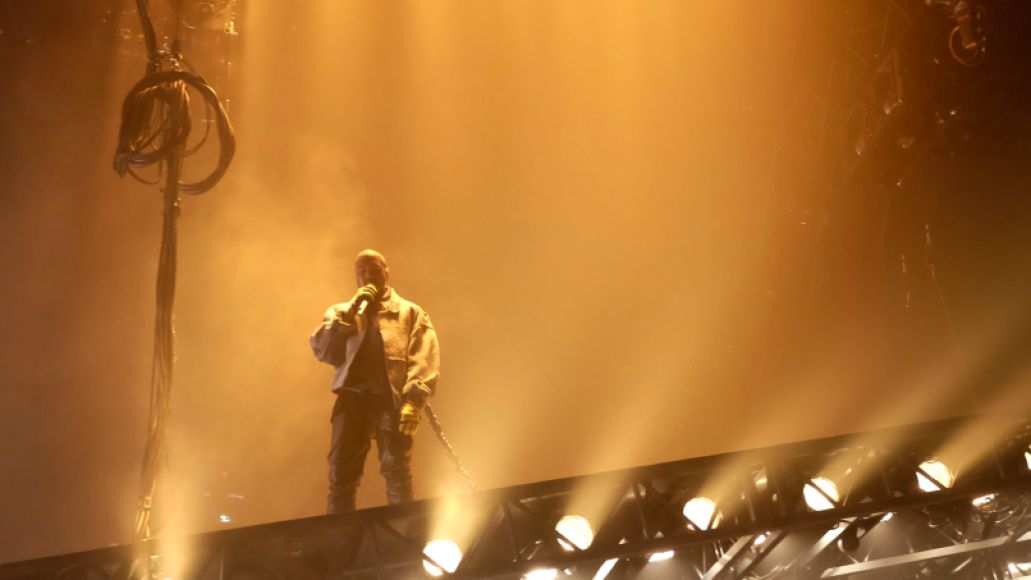 Maybe Kanye’s been watching a bunch of John Carpenter films or wants to build his résumé to score some horror (feature-length adaptation of “Monster”, anyone?), because the anxious synth interlude after “Power” made for the perfect lead-in to “Wolves”. As a layer of spooky fog settled on the floor, it was a great atmosphere for the paranoid track. During the performance, ’Ye remained crouched onstage, shielded from the sea of cell phone-wielding fans below. Sure, this isn’t exactly comparable to the threat that he perceives against Nori and Saint in the song, but the scary concept of always having eyes on you isn’t too far-fetched, either.

“Blood on the Leaves” 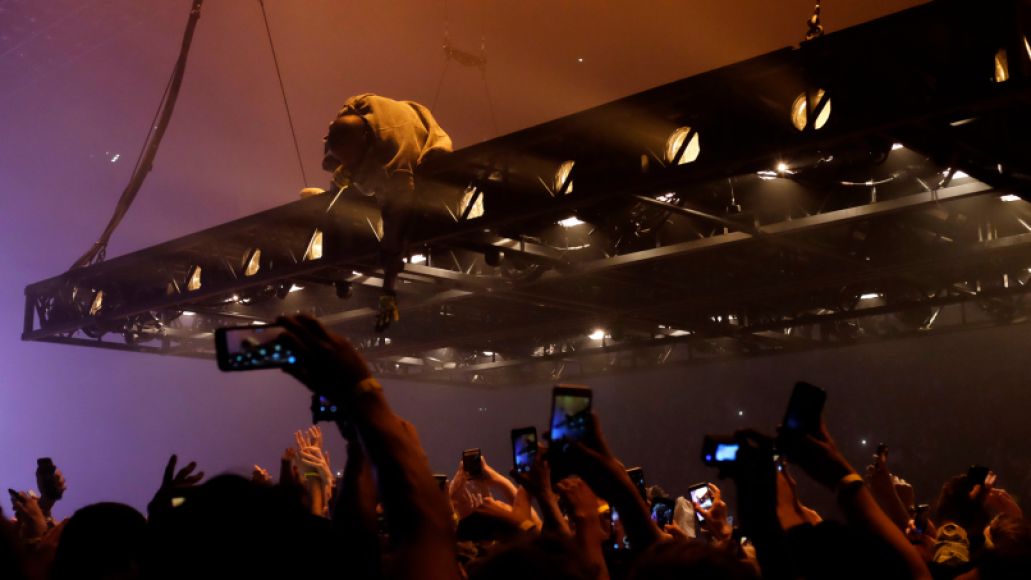 For safety, Kanye was tethered to the center of the moving stage. But he had enough slack that he could perch himself on the edge and even lean over. During “Blood on the Leaves”, he stretched his hand downward as the platform slowly lowered toward the audience. On the floor, there was a massive push to get close to ’Ye. As West came close to the crowd, he quickly yelled “Bring it up! Bring it up!” I wasn’t close enough to see exactly what happened – whether a scuffle broke out or if someone got knocked over in the mad dash – but Kanye requested security to help someone in the middle of all this, which earned a round of applause.

Travis Scott in the crowd at the opening night of the #SaintPabloTour pic.twitter.com/TmOIHPnIGc

After “Good Life”, Kanye kept the energy going with “Niggas in Paris”. When the beat kicked in, the crowd went wild, bouncing along in the center of the floor. At this point, Travis Scott tore through the crowd in the general admission area, becoming the center of a rowdy mosh pit beneath Kanye’s platform. (Right before the set started, Scott also sprinted through the crowd, which led to a brief frenzy on both the floor and the lower bowl seating.) As the song reached its end, those surrounding Scott formed a circle and swayed side to side in unison, in a similar way to how football and basketball teams get pumped in pre-game warmups. 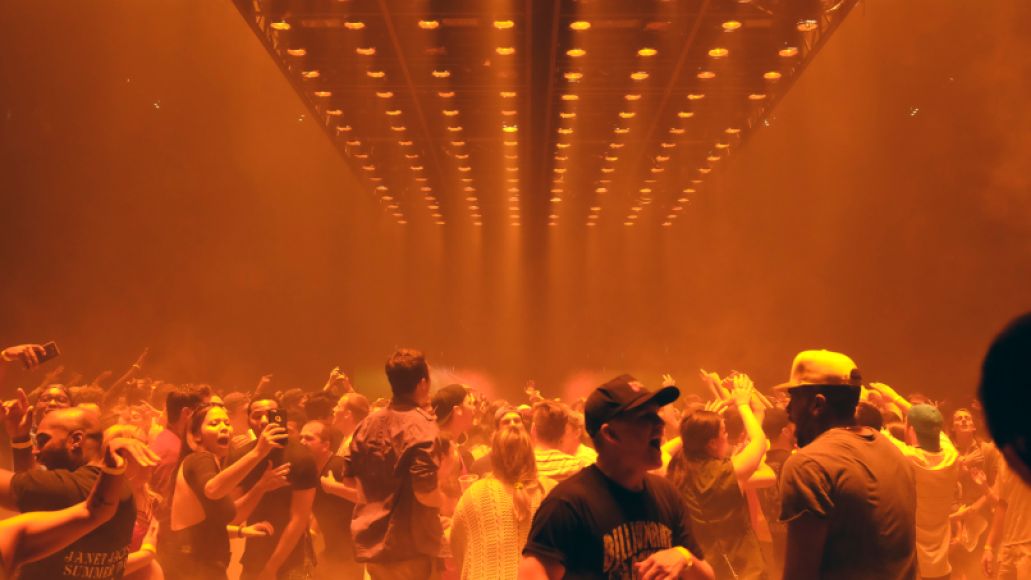 Aside from the blaring “Freestyle 4” and the subdued “30 Hours” or “Fade”, a couple other TLOP tracks received worthy debuts last night. On “Feedback”, West led the audience with “I can’t let these people play me…” The crowd screamed back, “Name one genius that ain’t crazy!” Kanye cracked a big grin and ended the song right there. ’Ye, as the concert perfectionist, was out in full force, from his precise cues with the production team to slicing songs at exact moments. (Thankfully he cut “Facts (Charlie Heat Version)” before the ill-advised and oddly sympathetic bit about Bill Cosby.)  And despite a softened stance toward sponsor-turned-rival Nike (more on that later), the crowd got especially hyped for his pro-Adidas jabs and the “we made a million a minute” lines.