Next month marks three years since Lorde’s smash debut, Pure Heroine, and perhaps no one is more well-aware of this fact than her own fans. With every passing day, her loyal legion seems to grow more anxious, especially after seeing the likes of Frank Ocean, Japandroids, and American Football (whose last LP was nearly two decades ago!) recently announce their triumphant returns.

Now, thanks to one of those antsy supporters, we’ve got a solid update on the album straight from Lorde’s mouth — it’s much closer to completion than we all thought.

On Tuesday, the New Zealand pop star posted an Instagram picture of herself on vacation. Rather than float good vibes her way, one fan left a rather pushy comment asking about her plans for new music, as Pigeons and Planes points out. “Do you think we will ever get another album or should we just give up on you as an artist?”

Surprisingly enough, Lorde replied, saying, “Give up on me if you want to! I’m an artist, I write a record when I have enough special stories to tell, and it’s all me, every melody every lyric, not some team who just start the machine up every eighteen months like clockwork.”

She then revealed that “the record is written, we’re in the production stages now,” adding, “I’ve worked like a dog for a year making this thing great for you guys.” 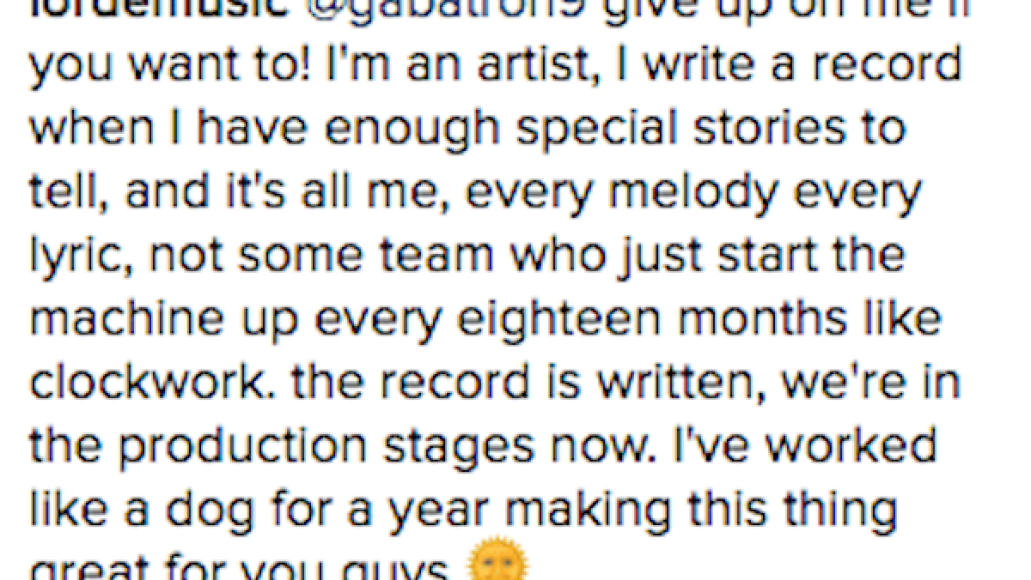 So there you have it. The future of music, as David Bowie once described the Kiwi singer, is nearly upon us.