Ever wonder which movies inspire your favorite bands or how filmmakers work with artists to compile your favorite soundtracks? Sound to Screen is a regular feature that explores where film and music intersect. This time, he looks back at Ireland’s favorite ragtag band of ’80s soul musicians, The Commitments.

What’s the greatest musical act to ever come out of Ireland?

Think now, there are plenty of options. The Cranberries? Oh, definitely not. Saw Doctors? Next. Thin Lizzy? Eh. Enya? Ugh. Sinead O’Connor? The Frames? The Pogues? My Bloody Valentine? Van Morrison? U2?! Oh, please. This should be so easy, guys. The answer is The Commitments!

You know, The Commitments? Managed by the great Jimmy Rabbitte? Hacksaw sounds and vicious vocals from lead singer Deco Cuffe? Background vocals from Imelda Quirke, Bernie McGloughlin, and Natalie Murphy? The Commitmentettes? Drums by Billy Mooney, wait no, Mickah Wallace? The band’s security guard, before he took the drums? And the great Joey “The Lips” Fagan on trumpet? Have you seriously never heard of The Commitments? 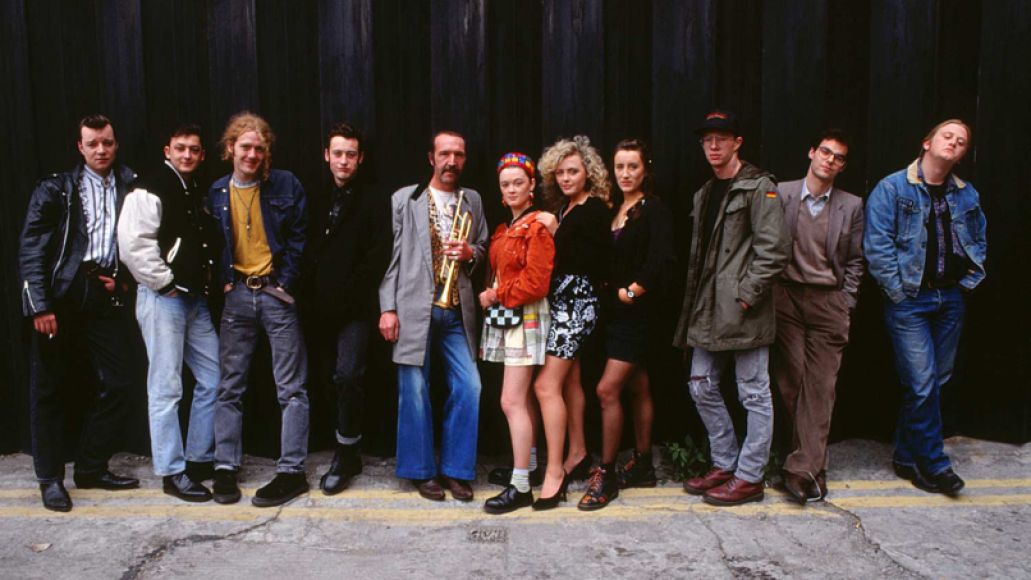 Okay. So The Commitments aren’t a real band, per se. They’re a fake movie band dealing in Wilson Pickett and Otis Redding covers, among many others. Why, they did covers feckin’ better than any wedding band ever could, if we’re being honest. And what sweet music they made in The Commitments. It’s been 25 years since Alan Parker’s classic comedy hit the stage via the silver screen, and the impact, the music, and the heart and soul can still be felt today. Why, John Carney’s entire wonderful filmography owes a bit of thanks to Alan Parker and company (even if he vehemently denies the connection).

The Commitments is both a toe-tapping, musically inviting comedy and a gritty portrait of soul idealism suppressing the ugliness of fame and famine. It articulated the well-meaning and working-class dreams of Irish musicians, while occasionally smiling in pity at their terrible behavior when success starts to seem within their grasp. It’s silly, surreal, and seriously catchy, built on a group of amazing characters and groovy songs. And its genesis is almost as exciting as the film itself.

The north side of Dublin. Novelist Roddy Doyle drafted and published his novel The Commitments, the almost-mythical tale of bassist Derek Scully and guitarist “Outspan” Foster. The book’s a sort of comedy by way of realist fantasy. The story goes something like this: Outspan and Derek dream of bigger gigs, but have zero business acumen between them. Enter Jimmy Rabbitte, an unemployed young man with an ear for good, old tunes. Jimmy agrees to help manage Derek and Outspan. Immediately, he pitches a soul approach to the duo, because who the hell else was playing soul in ‘80s Dublin anyway? It’s an untapped market.

Jimmy manages to get other musicians on board. The band begins to take shape. Jimmy gives them a fittingly classic name: The Commitments. All the good ‘60s bands have “The” in front of their names, he insists. The Beatles. The Who. The Temptations. The book is about making music, tasting fame, and totally fucking up, and it was the beginning of a Rabbitte family trilogy of novels from Doyle: the Barrytown Trilogy.

Doyle’s strengths are in language and characterization. There’s Mickah Wallace, the second drummer who graduates from bouncing for the band after the first drummer leaves. The first drummer, Billy Mooney, is a fan of Animal from the Muppets and hates Deco, the talented and sloppy lead singer. Deco has all the arrogance of a great, ignoble lead singer, an absolute pig who’s hilariously unaware of how annoying he is. Rabbitte is a smooth operator, likeable in a James Dean way. Derek and Outspan? Hardworking rockers. Dean Fay, the saxophone man, confuses genres and can’t decide if he wants to be a jazz, rock, or soul musician. And Imelda, Natalie, and Bernie, the backing vocalists, bring their own commitments — babies, boyfriends, and other baggage — to the mic. Everybody’s hungry, funny, and fascinating. Everybody has talent ready to be found. And it’s an easy, memorable read.

The book was extremely well-received, and a studio option was inevitable. The author was given a first crack at the screenplay, but Doyle’s draft floated around for a year, and then famed TV screenwriting duo Dick Clement and Ian La Frenais (The Likely Lads, Thick as Thieves) were brought in to polish and finish off Doyle’s script. The two were able to shop the script and caught the ears of famed director Alan Parker, a perfect fit. The director is an innovator in the realm of music in movies. His Midnight Express was an early instance of a film winning an Oscar for a score predominantly featuring synthesizer music. In 1980, Parker’s Fame was a hit musical and won Oscars for its original score and music. And he mastered the art of the long-form music video with his epic film adaptation of Pink Floyd’s The Wall in 1982. Oh, and he made Evita, in case anyone forgot, which also won Best Original Song at the Oscars. Parker had a knack for playing with music to enhance outlandish stories, and he was down with the Commitments script. He turned down a Les Miserables adaptation in order to roll right into The Commitments. Good choice.

The casting directors worked for two months looking at young actors and musicians in pubs and auditions and so on. Robert Arkins, a local singer with no acting experience, took on the role of Jimmy (after almost being cast as Deco). Glen Hansard, later of The Frames and Once, played Outspan. Most sensationally, a 16-year old named Andrew Strong, the son of the film’s vocal coach, bowled over the filmmakers with his fiery voice and was cast as the film’s pain-in-the-arse Deco. Like a teen Joe Cocker, his voice matched Doyle’s description of a “deep growl” in the book. He sang “Mustang Sally” for his audition, too.

Parker and company take modest liberties with the novel, but the mood is perfectly captured onscreen. The filmmakers lean on Jimmy Rabbitte as the narrative through-line. He assembles the band like the Rick Rubin of Dublin. And Parker nails the individuality and eccentricity of the characters while spotlighting the impressive songcraft of The Commitments. The Commitments could work as an Altman-esque portrait of individuals, but Parker focuses on a straight narrative, and it’s a funny and familiar one: the rise and fall of a band. This one just happens to be small-time, making it a lot funnier. The little wise-ass moments, the longing talk of the power of soul, and the creeping pressure of small-town Ireland blend to give The Commitments a tenor all its own. Parker stages his sequences in a lower key, using natural locations and breezing along. Dirty streets and empty pubs and little music halls are The Commitments’ stages, and they rock them all. The minutiae perfectly contrasts with the more sensational comic elements.

As the band realizes their talent, each member grows more comfortable about flaunting it. What a stepping-stone scheme. The Commitments are quickly given to feuding when things don’t go their way, and it’s funny. In that childish fighting kind of way. But the band has skill. It’s just that they can’t keep it together when they’re not performing. Which, to The Commitments’ great benefit, leaves the film with endless highlights. The soundtrack has been a huge draw for years. The original soundtrack was such a hit that it earned a sequel, and in recent years, a two-disc deluxe edition. The film’s band of misfits hits every damn note just right. Covers of “Chain of Fools”, “Destination Anywhere”, and “Try a Little Tenderness” are a few highlights.

And the music works both on and off the screen. Onscreen, it propels the plot. “Destination Anywhere” sees The Commitments when they first come together, ready to play for whatever comes. Away from the movie? It’s listenable jukebox music. “Try a Little Tenderness” plays as blue-eyed super soul when outside the film. Inside, it’s an ironic farewell and plea for the band to stay together.

The Commitments was a big hit right off the bat. $14 million in the US, four BAFTA wins (including Best Film and Best Director), an Oscar nomination for editing, and the soundtrack sold an estimated 16 million copies. It’s a little film that could about the little band that could. And like the movie’s big gag about tasting fame, only to vanish, so did the band. Sure, they briefly reunited in 2011 for the film’s 20th anniversary, and there was a musical adaptation in 2013, and outlets jam out “Where Are They” pieces every couple of years, but the film often seems to get lost in the “best of” shuffle. The film’s timing, musical and comic, is something infectiously unique. This thing still sings, proudly.

Do yourself a favor: Rent or buy the 25th anniversary Blu-ray, and check this film out. Enjoy the music, the laughs, and the mystique. For every modern movie that talks about “the music, man,” there’s a musical that really believes it, like The Commitments. A film that, as Rabbitte might put it, “grabs you by the balls and lifts you above the shite.”