Some people merely like music, movies, and books. Then there are those of us who live that Shelf Life. We examine your spines, flip through DVD shelves, and pick through crates, hoping to get even a little bit of insight into who you are based on what media you consume. This monthly column digs into that impulse by speaking with artists about the life of their shelves and looking at the connections between what we love and who we are.

In my teen years, I would frequently make friends (or at least attempt to) based on what movies I could quote endlessly. In my college years, the dorm wifi allowed students to share access to their iTunes libraries, a boon in that media-based camaraderie instinct. When I moved into my first apartment and started visiting friends in their first apartments, I’d go straight to the bookshelves and see if we had anything in common — and would back out slowly with an eyebrow raised if there were no shelves to be found. (The idea makes me cringe to this day.)

But then I grew up and realized that individuals are so much more than an amalgamation of the things they watch, read, and listen to, that you can’t judge a person by their collected covers. But that doesn’t mean I won’t be going straight for your bookshelves if you invite me over. And it’s not to judge you; not having your dog-eared copy of Infinite Jest or collected set of Twin Peaks VHS won’t make me think any less of you. But if you do, we’ll at least have something to talk about when I awkwardly struggle for words. Better yet, if you’ve got some books by an Argentinean author or some deep-cut metal vinyl, it’s probably because you’re passionate about it. People love to talk about what they care about, and I love to learn.

Over years of shelf-scanning, I’ve come across some lessons, some dotted lines between favorite artists and personality traits. I’m hesitant to call them absolute connections — I’m no psychologist after all, and the sample size is too small to infer causality. But anyone that’s talked to enough people about their favorite things has their own assumptions about what that will say about a person. The apartments with dozens of presidential biographies, for example, are usually inhabited by clever people, if on the sarcastic side — maybe from having seen all those good intentions gone to crap over the years. My friends with Austen and Brontë on their shelves are polite, or at least infuriated at the lack of politeness in the world today. Sitcom DVD sets? Obsessive tendencies and a real fear of things having to come to an end. Netflix queue full of “bad” horror? Feisty, excitable, a little jaded, but usually sweet at the center. There are always exceptions and sometimes the opposite is true. But hey, at least it’s worth starting the conversation.

The way those things are arranged on the shelf can say something too. A stack of vinyl usually means someone passionate and intense, eager for action rather than getting caught up in ideas, like someone who has those records alphabetized and dusted. Format can say a lot. You can spot the difference between a Blu-Ray collector and a streamer, a cassette hoarder and a vinyl purchaser, a Kindle owner and a library-goer.

The important thing to remember is that skimming names on a shelf isn’t the same as getting to know the person that put them there in the first place — but I’ve found it to be a good start. In this first edition of Shelf Life, get to know Mike Kinsella, the Chicago musician behind Owen and founding member of emo legends Cap’n Jazz and American Football. In his work as Owen, Kinsella unravels intensely personal, beautiful songs that carry a desperate grasp on life, shaded always by the reality of mortality. The recently released and superb The King of Whys deals in the rich details of a life keenly observed, the kind of mind that cherishes specifics. Which is to say, the type of person who likely has a lot of specific opinions on media, a fact readily reinforced by Kinsella’s Twitter presence. (He’s a must-follow, by the way.)

When asked for a photo of a book, record, or film shelf, Kinsella sent over a screenshot of his “Recently Watched” Netflix list. From that, we chatted about his recent binge-watching, how having kids has changed his media consumption and music, and how The West Wing could be the perfect antidote to political malaise. 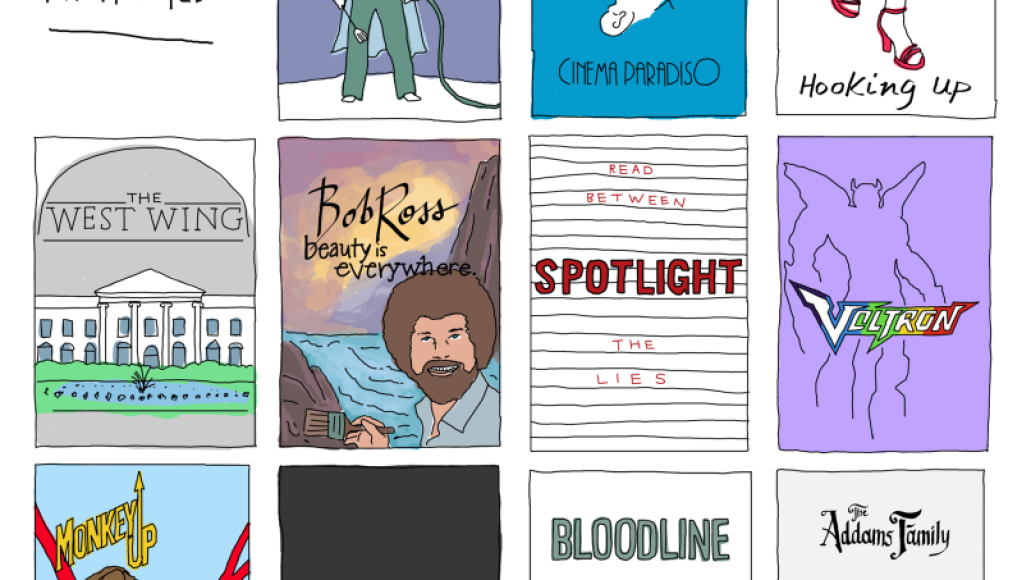 A lot of the shelf-scanning, digital or otherwise, can be done to triangulate the idea of questions. Or, of course, you can just jump right in and ask the question. Kinsella rattled off a sequence of films and TV shows: “The English Patient, Lost in Translation, MASH, Twin Peaks, Deadwood.” While some would stick to one or two, Kinsella seemed eager to list, unwilling to sum himself up in an easy box. And, looking at that list, the juxtaposition of the romantic drama of The English Patient and the hard-fightin’, oft-cussin’ Deadwood meets that instinct. “Any movie with Michael Caine,” he added.

While post-rock and ambient music may more naturally suggest the potential to soundtrack a film, the slow-burning and mesmeric The King of Whys suggests a real potential for that kind of evocative emotionality. Kinsella knows how to tug at the heartstrings. Or, better yet, he knows how to tug at his own so hard that you can’t help but feel it too. “I’d love to try it sometime,” he says when I suggest the possibility of Owen soundtracking a film or television show.

As a die-hard Tom Hanks fan with a currently on-hiatus Tom Hanks-based podcast called Hanks for the Memories, I felt a real compulsion to ask about The ‘Burbs. “I remembered loving it as a kid and was surprised to see how well it held up over time,” Kinsella noted, to my delight. “Such an all star cast! Corey Feldman at his best.” It’s my favorite Hanks film, exploring the paranoia and darkness behind the veneer of suburbia, Hanks and Carrie Fisher reuniting after The Man with One Red Shoe for more hijinks. 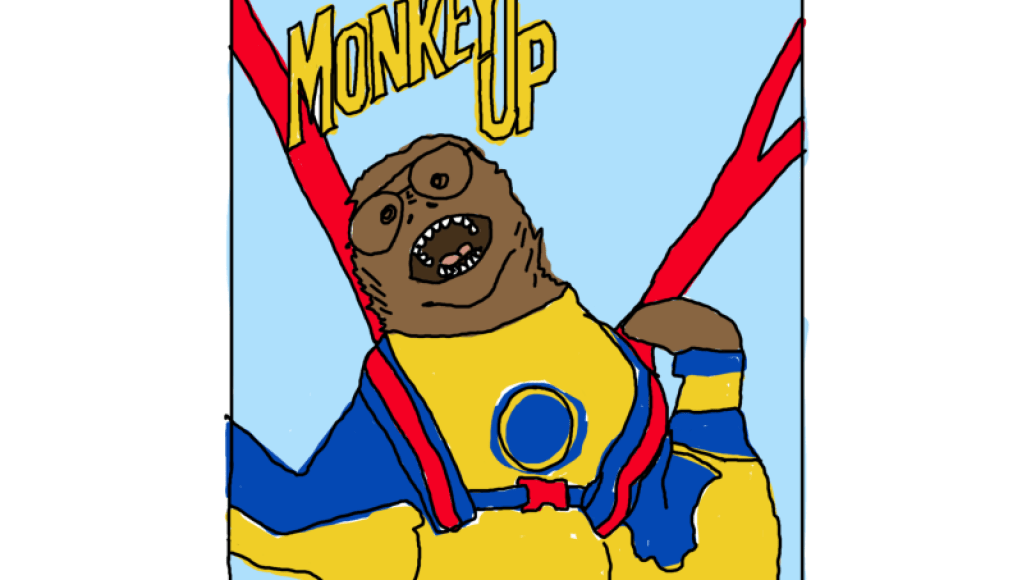 While Kinsella was once known as a preeminent purveyor of teenage angst, he’s now a father of two young children, and the change is reflected in his music, as well as his Netflix queue. One of his best songs, “Vivid Dreams” from2013’s L’Ami du Peuple, addresses that passage of time directly: “How long have I been sleepin’?/ I’m a dad and my dad’s dead.” That reality may look a little brighter on that Recently Watched list, though in reality it’s pretty bleak. I had to look up Monkey Up based on the poster alone, and the ensuing trailer alone … yikes. Fart sound effects, references to Punk’D, the word “retweet” used as a laugh line. I felt pretty safe that one was the kids’ choice, rather than Kinsella’s. “I’ve actually never heard of that one,” he laughed. “Maybe something they found with grandma.”

Without kids of my own, I wonder aloud whether it’s possible to get them hooked on the good stuff. “Yeah, it’s a constant struggle to weed out the truly terrible stuff from the just sort of terrible stuff,” he explained. “But as they get older, they tend to weed that stuff out themselves, as it doesn’t make them laugh or hold their attention.” Parenthood seems to have a similar re-contextualizing process on artists. Over his last few Owen albums, logically, Kinsella has put an extra focus on growing up, parenthood, family relationships, and the like. As an influential musician in bands that captured teendom, it should be strange to hear him singing as a father, but the results have been so smooth and resonant. “No, I didn’t really have any plans to do so,” he laughed. “I’ve just been writing about where I’m at, and I don’t find myself pining over girls anymore as much as I’m picking up after kids.”

Taste can pass on generation to generation. There weren’t any other high schoolers obsessed with ancient movies like Duck Soup and Arsenic and Old Lace, but they’re my dad’s favorites, and they just kind of stuck. That’s a particularly interesting concept when it comes to the children of a musician. As it turns out, Kinsella thinks his songs’ don’t have enough hooks for his kids to get into it yet. “My daughter likes Taylor Swift. That’s it. And my boy likes the song “Beauty and the Beat” by Justin Bieber. That’s it,” he says, repeating the “that’s it” like any parent sick and tired of their kids wearing out that one song.

To a similar end, I found it interesting that Kinsella had recently watched Cinema Paradiso, an Italian film in which a famous filmmaker looks back on his childhood and falling in love with the movies while building a deep friendship with the theater’s projectionist, Alfredo. Some real-life artists obsess over art that depicts other artists and deals with the romance of art, particularly filmmakers. “I’m not sure about that artist mumbo jumbo,” Kinsella laughs when I mention all that. “But I wish Alfredo was my dad.” 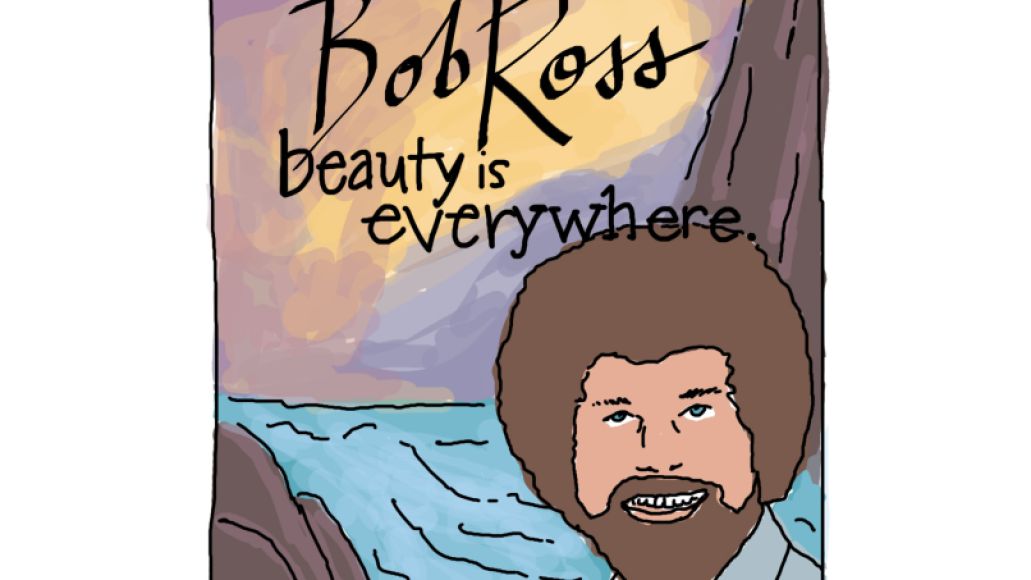 There’s been a good amount of chatter on the Internet due to the recent addition of Bob Ross’ instructional painting series to the vaulted halls of Netflix. It seems like there’s a lot of ironic viewing and appreciation, but there’s something great about someone genuinely endorsing and espousing a love and creation of art, especially in a therapeutic, if goofy, tone. “It scratches my ASMR itch like nothing else,” Kinsella agrees.

He’s also been bingeing Bloodline, another hot item on the streaming service. “Love Bloodline!” he exclaimed. “Binge-watched each season in like two days, as soon they came out.” Much like the rise of “indie” music, there seems to be a rise of alternative outlets in television, similarly producing adult, challenging content outside of the traditional networks pushing out more mass-appeal fare. “I think it’s great that there are alternative outlets, and the diversity and quality of content, just as in music, proves its value,” Kinsella replied. “People nowadays can do whatever they want and find an audience for it. It may not be a big audience, but if it’s large enough to sustain itself, then that’s big enough.” 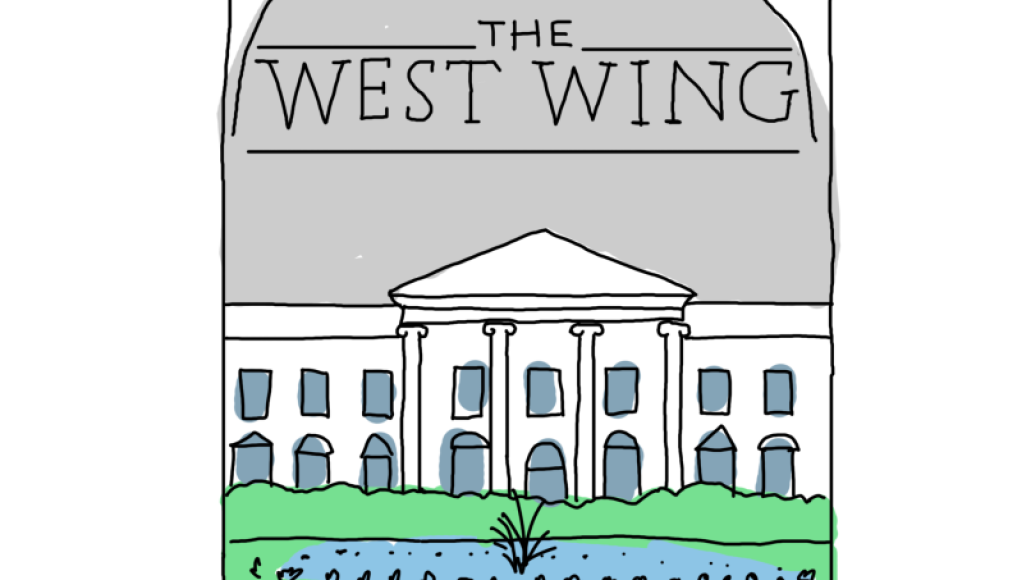 And, much like seemingly every conversation I’ve had in the last year or two, things inevitably came around to politics. Ever the razor-sharp wit, Kinsella will offer some cutting political tweets from time to time, eager to tear down the bullshit. Like more than a few of my friends, it seems Kinsella has taken to watching The West Wing as an escape from the reality of a political world that has no room for that kind of sanity. “It gives me hope!” he brightened up. “It’s probably an unattainable goal, but policy aside, it’s so cool to watch the smartest people debate the merits of social issues as opposed to the people who most want to be popular.”

What We Learned from Mike Kinsella's Netflix Queue