“Most of the musicians I know in NYC have serious record contracts, which is definitely not the case in any other city,” says Elizabeth Skadden of the buzzy, brain-rattling no wave quartet WALL. Her underlying point is twofold: Talent isn’t hard to come by in New York City, which also means it’s not easy for bands like hers to stand out from the crowd.

That’s why we’re excited to bring our local focus to New York for this month’s edition of CoSigns. We sent our team out to the five boroughs (and beyond) to dig up the city’s most promising young acts, and they returned with a list of artists that reflects New York’s reputation as the world’s wildest melting pot. The acts we’ve chosen to highlight — Sunflower Bean, Xenia Rubinos, Big Thief, LVL UP, and WALL — are by turns strange and brilliant, but they’re never anything less than original. In a city of more than eight million, that’s quite the accomplishment. 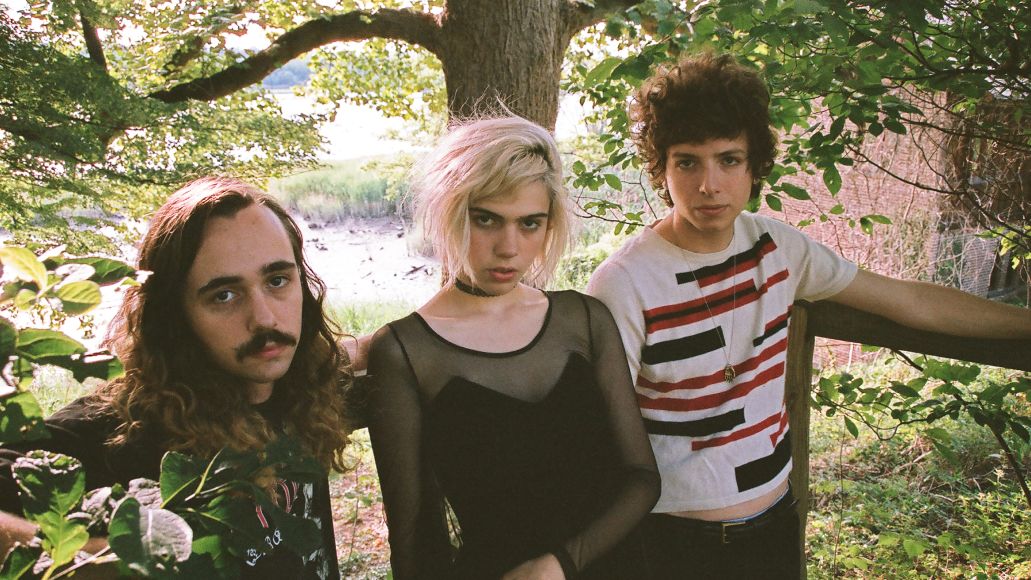 When I get in touch with Sunflower Bean, they’re “someplace that starts with a G.” We narrow it down to a city in the Netherlands, the next stop on their tour after playing in Shanghai and Beijing. The New York trio don’t sound one bit overwhelmed by time zones or time lost, despite their youth.

You’ve been touring all over the world lately, but is there any moment where you go, “OK, I think we need a little bit of perspective”? I’m sure a lot of people want to know how the touring is going, but I’m fascinated by the times between the touring. Like chatting to me now, or taking a break and having a coffee. People take those little moments for granted. Do you feel like you’ve had time to catch a breath?

Julia Cumming: You’re in this exceptional situation, but we still haven’t had that much time to relax. This morning we had a nice breakfast, and we all took long showers. You have to take what you can get and put a little effort into trying to see the cities that you’re in. That’s a constant thing. When you have the privilege of doing something you love as your job, you just have to balance it. Even sometimes when I’m about to perform, I find myself thinking about stupid stuff, like, if my outfit looks OK, or if I’d brushed my teeth that morning, even though I should be more in the moment. It’s always something to think about.

Do you feel like the performance becomes second nature? Do all those little peripheral things, like “Did I put deodorant on? Did I wash my underwear?”, pop up because touring and performing have become totally natural? Or do you still get up on the stage and get a little bit jarred because you’re sharing your personal lives and creativity with the world?

Jacob Faber: It’s a very strange life we lead, this touring. It’s weird when your mind wanders. In the middle of a song, my mind will go to some crazy thing, like, Oh, I hope the food will be good on our next flight. Sometimes playing a set, at least for me, is when my mind can wander and think about things in a weird space.

Faber: Yeah, it makes it hard to form habits, which I think as human beings you want to do. I think as a touring band, it’s probably good that even though it might be easier sometimes, it keeps you on your toes and ready for the unexpected.

And you can create a world that you can improvise in. Do you ever feel like an impostor? What was happening when you thought, “OK, I can’t believe this is actually my life. I’ve just gone to Asia, I’m now in the Netherlands, I’m moving over to the next country tomorrow”?

Cumming: I hate to tell you the truth! There’s this story I tell sometimes where our last big hometown show we did in New York City was at Bowery Ballroom, a legendary venue, and we had never headlined there. It sold out before the show, and all our friends and family were there. It was this really personal moment of “Yes! We’re doing something. We’ve made it in our own little personal way.” But then the next night we were getting paid a little more money than usual to play at a frat party at Dartmouth. So, we do this big show where we’re like, “Aww, we’re on top of our little world we made for ourselves,” and the next night we’re playing an ice-cold dead-of-winter frat house, a fight breaks out upstairs, and everyone goes up there to watch the fight, and I swear to god we played to not one single person. The next night … like six hours away. We’re still working our way up, so we don’t get a big head. Every great show is a gift, and every not so great show is a …

Do you feel that while you’re touring and playing you figure out little nuances of what you were originally writing about? Or are you still figuring out what the hell you were thinking when you wrote them? I’m wondering if songs evolve.

Cumming: Something about Sunflower Bean is that it’s not a one-person band. It has a lot of our own styles and flavors, which I think is one of the reasons people call it so many different things because we’re all influenced by so many different things. Sometimes when you write a song and it goes out into the world, it doesn’t exactly belong to you anymore, and the world puts its own meaning on it. I think songs constantly change. And even sometimes when you make it, you don’t fully understand. Maybe it’s different for other people, but that’s what I find. You know what you’re going for and then you realize once it’s done what other people said it means to you, based on a time, or a feeling, and all these different things. I wouldn’t necessarily say that playing the songs live adds that dimension, but I think just as far as songwriting that’s something we’ve experienced.

And how covering certain songs would allow the music to take on a new life. I believe you have a covers EP coming out soon? I read an article the other day about how people think Trent Reznor did a cover of Johnny Cash’s “Hurt”, instead. Apparently, Reznor felt that it was invasive in the way Cash took that song, jumped inside of it, wrapped himself around it, and that was it. It became his. I feel like so many people take covers for granted, and it really is such a brilliant exchange for two artists or two bands. Were you nervous to cover songs that you found inspiring?

Cumming: The covers EP is interesting. There are very few of them being made, but I think it’s something for the fans and a little supplemental piece for the album. We made it when we had Rough Trade Album of the Month, and it was a little bonus CD that we recorded in our basement, actually. It’s a little special thing that shows a little bit more of who we are and our influences. It’s got “Life’s a Gas” by T. Rex, “Old World” by Jonathan Richman, “Shine a Light” by Spiritualized, and “Harvest Moon” by Neil Young, which is kind of out of left field. It was one of my favorite songs at the time.

Kivlen: Yeah, I mean there’s definitely the element of wanting to do a good job and make it a cover with some sort of purpose. We picked the songs basically just out of personal preference. We just picked songs that meant something to us instead of picking something that we wanted to radically have a vision of reforming.

Kivlen: Yeah, it’s not like we took “Harvest Moon” and did it as an industrial.

Faber: We did songs that we knew we wouldn’t totally fuck up.

Kivlen: I have the opposite opinion. I think that nothing is too sacred. You can try your hand at anything. Who gives a fuck? People don’t have to listen to it. I don’t want to do anything that’s shit, but if you do one thing that people hate, it’s OK.

Yeah, but there’s something in that. Your music allows people to listen, interpret it, and then shove whatever their opinion of you is onto you. I just hate that people are just summing you up as psych rock, as I think there’s a grace to your music that supersedes it.

Kivlen: I’ve grown to hate the term psych rock. To us, psych rock sort of just means creativity. So if things aren’t a little weird or you haven’t heard it before, then what is it? There’s plenty of rock bands that play straight-ahead rock songs with power chords, and if something happens that’s just a little bit off the course, then it’s psych rock or prog rock. I think all music should be a little bit progressive.