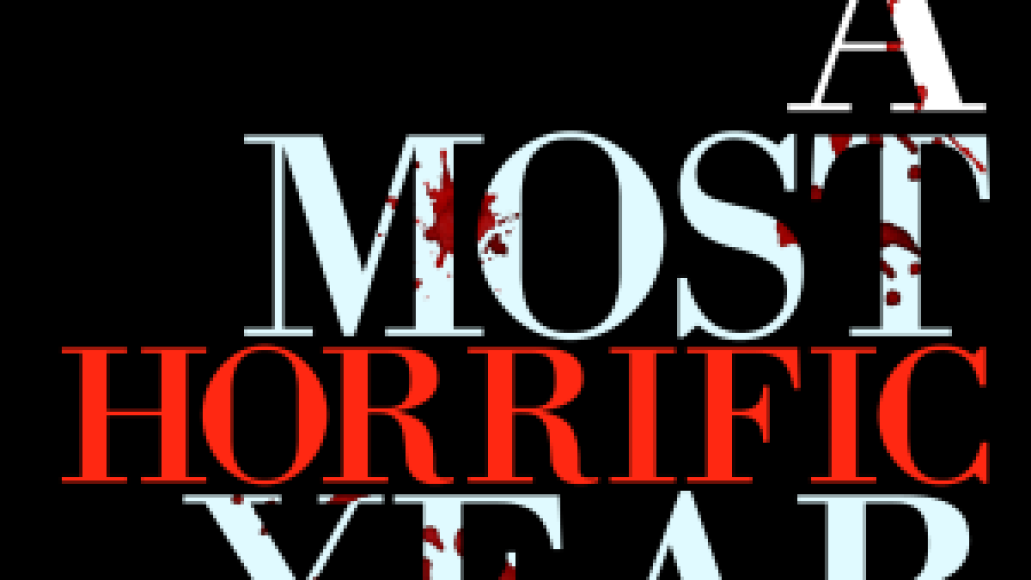 With A Most Horrific Year, Senior Staff Writer Randall Colburn analyzes and reflects on the most critically acclaimed horror movie of every year, starting in 2015 and moving backwards. Spoilers are guaranteed.

I saw that in somebody’s Facebook quotes ages ago and got sorta obsessed with it. It’s actually a quote from an Irish play called Juno and the Paycock, which I eventually saw and thought was boring, but this quote sticks with me. It’s something I used to do when I was young and precious: get tipsy and go stand in the snow and stare into the sky and reflect with melancholy on ideas of purpose and faith and aliens.

I always liked those moments. In a wispy cocoon of alcohol, it’s easy to feel light and warm, like there’s no need to regret everything that came before because it led to this moment, and isn’t this moment sorta lovely?

Of course, those moments pass, giving way to anxiety and depression and ruminations on the endless forks and whether or not you’d be happier here, there, or anywhere. I guess I always liked the idea of Christ because it was an easy way to incorporate destiny into your thought cycle. There’s something comforting about the idea that our every move is guided by that great ephemeral hand.

Free will is terrifying to those who don’t trust themselves. 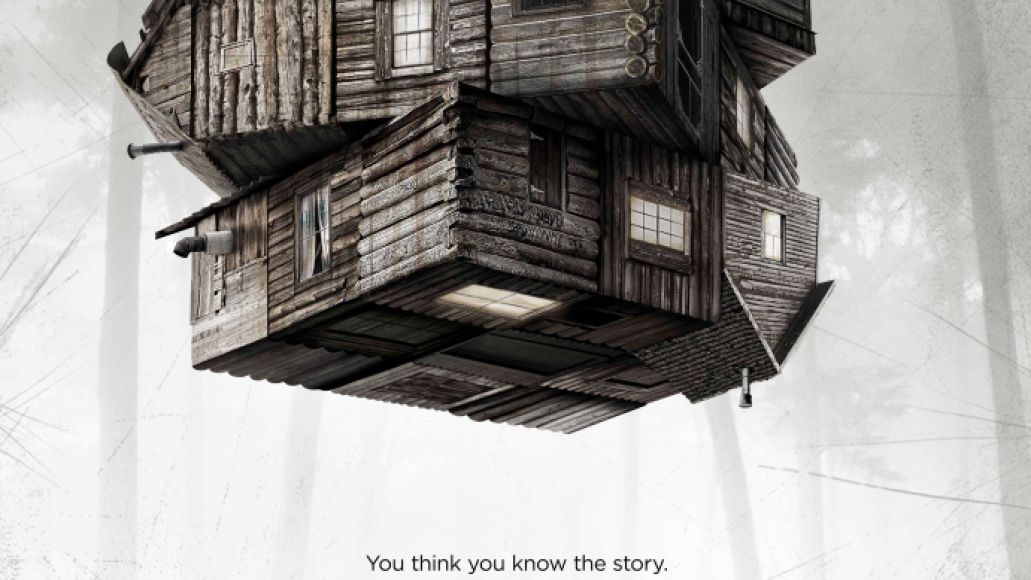 And horrorgoers in 2012 didn’t have much reason to trust the cinema at that point. 2011 was a tremendously confused year for horror, especially studio horror. The only notable scares to emerge early in 2012 – before Cabin’s April opening – were underwhelming genre exercises like The Woman in Black and Silent House, decent films that neither asserted themselves nor offered simple, visceral pleasures. And it’s not as if anticipation for Cabin was all that high. It was filmed in 2009, but delayed due to studio finances and a misguided attempt to transfer it to 3D. Nobody was expecting much, even with cult icon Joss Whedon involved.

That lack of expectation, however, was key to the film’s critical success. Most people, including myself, went into Cabin blind, which is truly the only way to fully enjoy its shift from boilerplate horror to metafictional critique. If you need a reminder, Cabin’s dual storylines – sexy teens in the woods and the curious band of corporate types plotting their demise – eventually dovetail to reveal that youthful hedonism and murder is the only thing satiating the old gods, who, if not routinely fed a blood sacrifice, will rise up and destroy the world. Sitterson and Hadley (Richard Jenkins and Bradley Whitford, respectively) are the guys in charge of making sure that sacrifice is made in just the right way.

Just how they manipulate the sacrifice is something to be discussed later, but its labyrinthian peculiarities and elaborate mechanisms serve as both a fresh spin on traditional horror tropes and a fierce commentary of the industry in the new millennium. Whedon described the movie as “a serious critique of what we love and what we don’t about horror movies … the things that I don’t like are kids acting like idiots, the devolution of the horror movie into torture porn and into a long series of sadistic comeuppances.” Through that lens, Sitterson and Hadley are the soulless Hollywood producers who must continually recycle the same old tropes in an effort to please the faceless masses, here represented as Lovecraftian gods.

That critique makes total sense in the milieu in which they made it. It was March of 2009, and the abysmal remakes of Friday the 13th and My Bloody Valentine had just hit theaters, each bearing marks of the hallmarks of that era of horror: “torture porn” in the vein of the Saw and Final Destination sequels. That the movie’s aim still resonated upon its release three years later says a lot about the incremental crawl of progress within mainstream horror. The release of Paranormal Activity in the fall of 2009 didn’t shift the industry so much as provide it a new format (found-footage) to exploit with its grotesqueries.

Critics blunted and numbed by years of grimy, bone-splintered horror heard Cabin’s message loud and clear. Even those unable to get behind Whedon’s self-satisfied cleverness and cutesy dialogue couldn’t deny the effectiveness of his critique. Audiences dug it, too, though they didn’t come out in droves. Still, the film managed to make double its budget, and tastemakers the world over began dubbing Cabin a “game-changer.” Wes Craven said, “It will challenge people to do something totally different.” 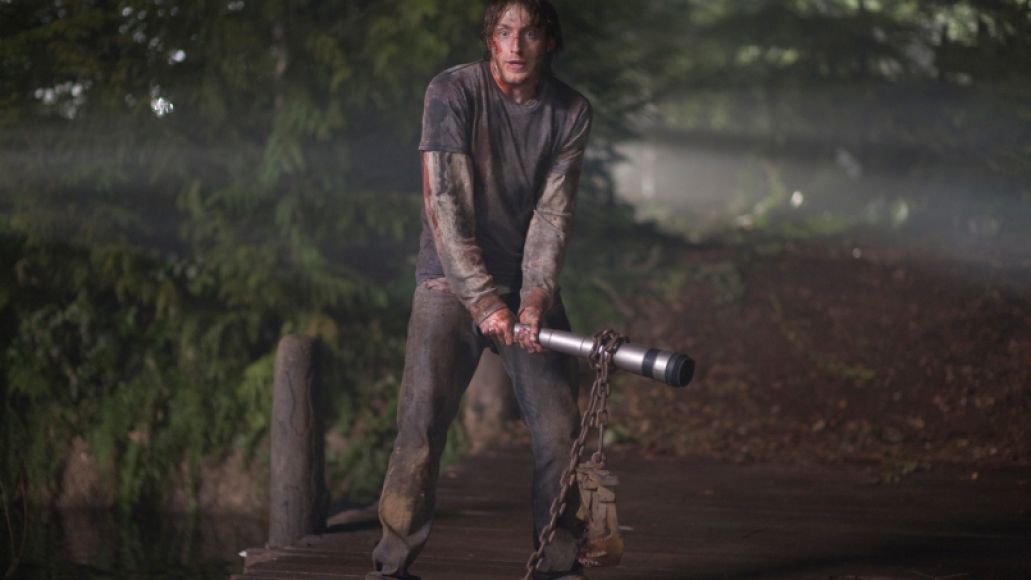 “We are not who we are,” Marty the stoner (Fran Kranz) says contemplatively midway through the movie. Aside from Sitterson and Hadley, he’s clearly the best character. At first, he embodies all the aspects of a slasher-flick stoner: shaggy, sweet, doofy, and a bit of a conspiracy theorist. But, in one of Whedon and Goddard’s subversions of slasher tropes, he turns out to be one of the last heroes standing, responsible along with “virgin” Dana for bringing about the wrath of the old gods.

He’s right, too. Once the teens are chosen as the next sacrifice, Sitterson and Hadley set about manipulating their personalities to those of a traditional teen sex slasher. This is most notable in jock Curt and foxy Jules, a couple who, through chemical-enhanced hair dye and pumped-in pheromones, slowly transform from smart, well-rounded characters to insatiable, jerky sexpots. “We are not who we are,” Marty says, realizing that he’s different, too. All of them are, but only Marty seems to grasp that such a shift has cosmic roots rather than earthly ones.

What scared me was how I’d eventually blink up at the stars one night and find myself anchored on something old, some intangible comfort that I nevertheless found uncool or untrustworthy. It didn’t begin making sense to me until roughly a decade ago. I was losing my Christian faith in the midst of a seismic breakup, and, like you do, I went to see a Todd Solondz film. It was Palindromes, a provocation about religion and abortion that’s, sadly, considered minor Solondz. I’ve never shaken the film’s central thesis, however, which essentially posits that we are all born one way, and, no matter where we go or how we grow, we will inevitably find ourselves again staring deep into whatever it was that brought us into this world. After spending years trying to be a virtuous Christian, I’d suddenly found myself more or less where I was previously, lost and abandoned. No matter how many letters there are, a palindrome always ends where it started.

Are we not in control of our identities? The older I get, the less I think so. My thinking is that free will exists. Our choices matter. Our life is textured by our decisions. But the end, I sense, is predetermined. I don’t mean, like, the apocalypse or anything so biblical. It’s what’s inside. Our heart, our desires, ourselves. We’re all hurtling towards something inside ourselves.

We see this in The Cabin in the Woods. Sitterson and Hadley repeatedly say that the subjects of their sacrifices must arrive there via their own free will. They are given a warning first, and then they are given a choice. That choice comes in the cabin’s cellar, where a variety of trinkets, diaries, and touchstones bring about the vessel of their demise. They end up with redneck zombies. But even if they ended up with werewolves, mermen, or that damned unicorn, the outcome would be the same.

That’s scarier than any monster. 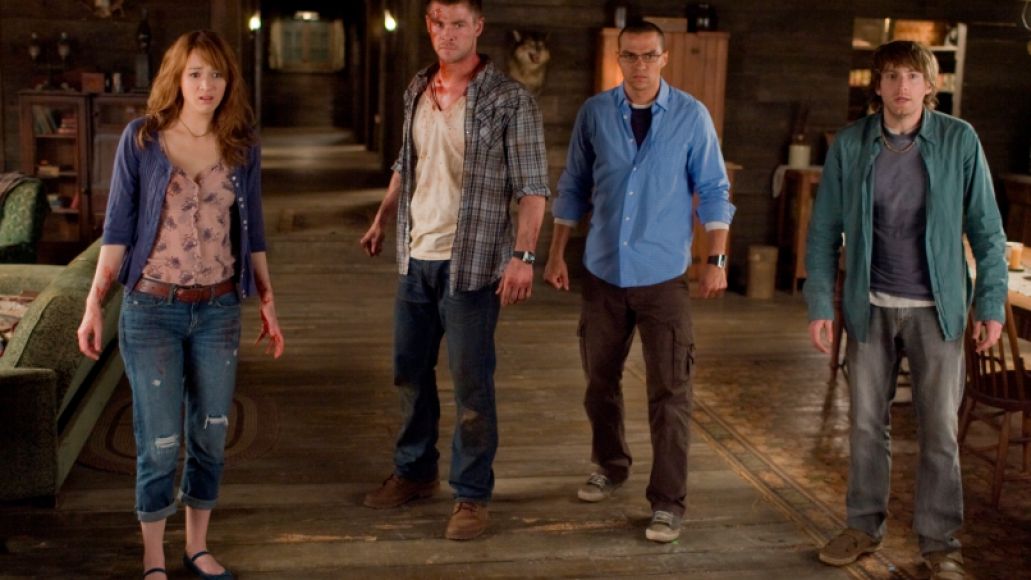 So, no, The Cabin in the Woods didn’t inspire filmmakers to make hilarious and ultra-violent meta-commentaries. Everyone was still too broke to do that (let’s not forget Cabin’s $30 million budget). But if it had any lasting impact, it was the reminder that horror has the power to surprise, and that subverting traditional structures are likely the best way to get your film noticed. Much of the budding “mumblegore” movement – namely, films by Ti West, Adam Wingard, E.L. Katz – found success here, even if their low-budget throwbacks exist in a different stratosphere than Whedon and Goddard’s ambitious fantasia.

But they’re funny. And weird. And different. Until Cabin came along, horror in the early 2010s was ugly and dour. No one needs that. No one wants that. Still, in retrospect, it can’t help but feel like a little bit of a failure. I mean, Cabin ends with the old gods rising from the depths and bringing about the apocalypse, for fuck’s sake. And I bet when they were making it, Whedon and Goddard saw the film’s potential to subvert and upend – reminder: These are two of the most powerful men in genre – the horror industry, to shake it out of its reliance on torture and remakes and tired tropes and usher in an era of original vision.

But that’s not really how change works, is it?

“I thought there’d be stars. We are abandoned.”

Marty says this as a zombie lurches towards him in the background. This sentiment, as poetic as anything you’re likely to hear come out of a stoner, is another that tends to cross my mind as I stroll home beneath a nighttime sky. Like the aforementioned O’Casey quote above, it ponders what lies beyond the darkness.

Because, to know it is something, and to know that it knows what you are better than you do…

Well, whether that’s horrifying or comforting is up to you.

In 2012, The Cabin in the Woods Brought the Gods Back to Horror