Highs and Lows is a feature in which we chronologically track the peaks and valleys of an artist, band, or filmmaker’s career. This time, we look at a seminal Boston band who helped bridge the gap between indie and mainstream.

As music fans, we love to romanticize the influence and importance of our favorite bands. What’s not as appreciated is how thorny and complicated the path toward greatness often is for those bands that achieve it. Take any band tagged as “underrated” or “underappreciated” in its time, and it’s not hard to find the various bumps in the road.

Pixies, for one, have navigated their way through a myriad of ups and downs over the course of their 30-year career. In their initial seven-year run, they built a musical legacy that any self-respecting indie rock band would kill for. Surfer Rosa and Doolittle weren’t just outside-the-box, underground smashes upon their release in the late ’80s; they’re records that have continued to grow in stature in the decades since. No longer is it apt to call Pixies a cool indie band. It’s not a stretch today to hold the band’s influence up alongside many of the very best bands in rock and roll history. Kurt Cobain openly admitted that the now-legendary guitar intro to “Smells Like Teen Spirit” was a Pixies rip-off while Thom Yorke, Bono, and David Bowie have also sang the band’s praises. 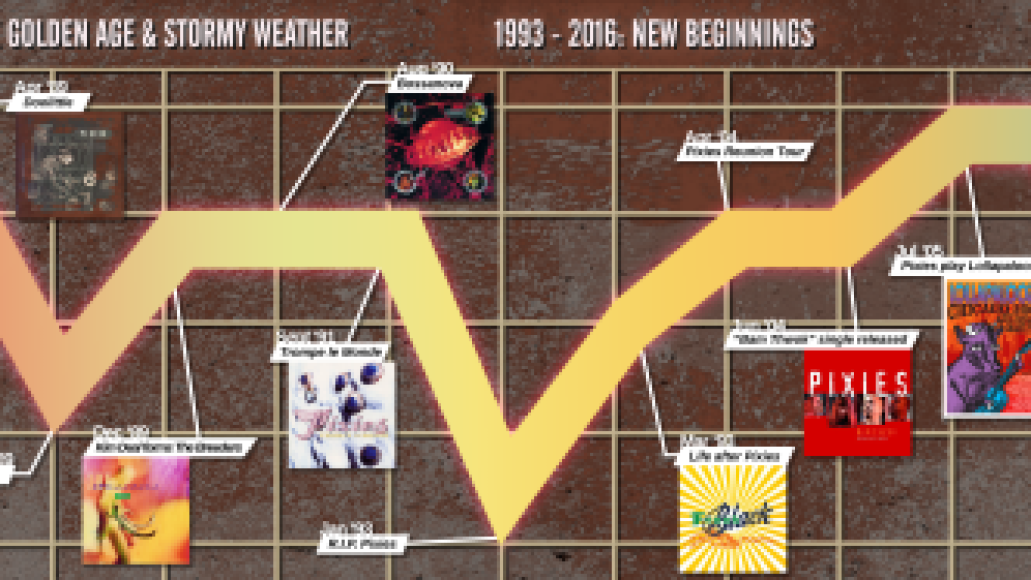 That all sounds positively storybook, but Pixies’ creative highs have been counterbalanced by some difficult lows over the years. Frustrations among band members brought the band to a halt, just as the alternative sounds they helped pioneer were bearing fruit on radio and MTV. They returned to prominence more than a decade later with a handful of successful reunion tours, only to stall creatively upon regrouping in recent years to pen new music. Band members have been replaced, as have their replacements. In this installment of Highs and Lows, we look at a seminal indie rock band’s long, choppy road to mainstream acceptance, culminating with the release of Pixies’ second post-reunion effort, Head Carrier

The Highs and Lows of Pixies