Twenty years ago, Bush bravely followed up their 1994 multi-platinum juggernaut of a debut, Sixteen Stone, with a darker, more cerebral sophomore effort in Razorblade Suitcase. Produced by Steve Albini and recorded at London’s Abbey Road Studios, the album debuted at No. 1 on the Billboard 200, selling 293,000 copies during its first week of release in the US and staying alive with hit singles “Greedy Fly” and “Swallowed”.

To celebrate the anniversary, the band has announced a digitial reissue due out December 16th via Round Hill/Zuma Rock Records. In addition to the remastered album, the reissue will also include four rare bonus tracks: “Old”, “Broken TV”, “Bubbles”, and “Sleeper”. While the first three have appeared in some official capacity, “Sleeper” has never received a proper release, and lucky you, we have an exclusive stream right now:

Those looking for the reissue on vinyl will sadly have to wait until 2017, but it’ll be worth it. As you can see in the featured image above, the album will be pressed on 180 gram black and white swirl vinyl and come housed in a metallic silver gatefold cover complete with re-interpreted artwork, a poster of lyrics (including three songs that weren’t on the original), and liner notes from Albini. But wait, we also have the latter for you.

Take a read at Albini’s lengthy notes below as you listen to “Sleeper” above. We’ve even tossed in an exclusive photo by Pete Black that captures singer Gavin Rossdale performing live during the band’s lengthy supporting tour.

Writing in a time of profound cultural upheaval, it remains there has always been a dichotomy between British and American bands. At least according to their self-mythology, American bands start in garages and work their way through an exhausting gauntlet of battles-of-the-bands, teen dances, club shows and heavy touring, hoping to earn a profile that warrants making records. If there’s a defining characteristic of American bands it’s a proud work ethic and willingness to prove themselves as live performers.

The origin myth of the British band starts with a conversation about empire over Pimms cups at Wimbledon, or when the coolest guy in the art college finds his voice and assembles a cravat-wearing backing band of guys named Nigel and Simon. With a slick manager and some connections, a career could be arranged, in the manner one lands an entry position at Barclays; school ties and all that. What what. British bands emphasized style and cool, and playing live was little more than a necessary chore. If American bands were Paul Bunyan, the British bands were Little Lord Fauntleroy.

The Fauntleroys had an entire industry playing along, led by the tastemakers in the music press, ever elevating the coolest of the cool and most connected to superstar status, keeping the rest hungry and supplicating for attention. It’s hard to imagine now, since there’s not much left of “the press,” much less the music press, but papers like Sounds, NME and Melody Maker for decades remained capable of creating sensations around bands and music that nobody had yet heard, sometimes before it had even been written.

The crowning achievement of this method was the uniquely British band Oasis. Their first album was trumpeted for months by the press as the savior of UK music, and despite nobody ever having heard them, they topped favorite band lists. Their album entered the charts at no 1 and they were instantly a top tier act on the festival circuit, the plug-and-play standard for live exposure for Fauntleroys since the 1960s. A single festival show might expose a band to as many as 50,000 people, and with a half-dozen of those one could consider live exposure solved for a year, or at least until Australia or Belgium expressed interest.

In contrast, the American scene had little that was monolithic. MTV may have served as a catalyst in the 80s and early 90s for bands with a striking visual image, but the meat and potatoes of the music scene in America has always been the touring circuit. Bands play shows, not festivals, town by town, mile by mile, earning attention. To see 50,000 faces live required 50 or 100 individual shows and months of planning, booking and travel. That hard-won attention was eventually reflected in radio playlists, while prone to short-term manipulation tended to reflect the tastes of the audiences they served. If a band proved popular, they would eventually get played on the radio, even if British. Or named the Butthole Surfers.

The differences in methodology weren’t lost on those in the thick of it. British bands often saw “cracking” America as a kind of final stamp of legitimacy, but when the cold reality of it struck them, that their hype ninjas had no influence and they’d need to dedicate months or years of their lives to traveling town to town playing in front of people a few dozen at a time, the stunned response was usually, “what, play LIVE, like performing monkeys? In… in BARS?” 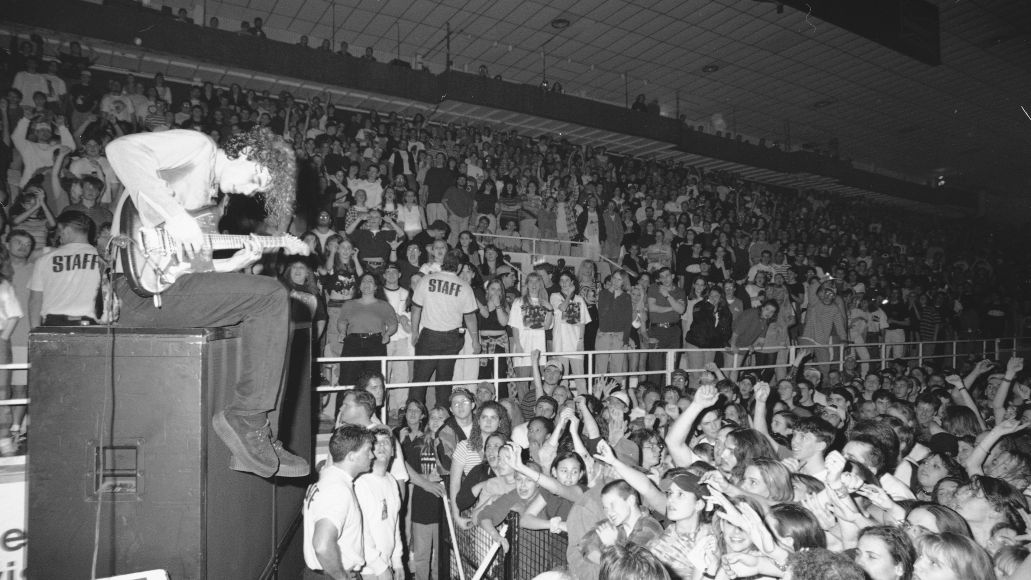 Sure there were occasional feints in that direction. Oasis, for example, tried to mount tours, but booked themselves into too-big venues, and even papering the room with free tickets couldn’t deaden the echo. Ultimately most British bands resigned themselves to being famous at home and accepting that stateside success was something like impossible.

But Bush decided not to sit in the pub with a publicist (and an expense account) and complain about not being big in America. They mounted a campaign of incessant touring and earned their stripes. They played the whole continent, then played it again, then played it again until the radio started playing their music.

And once they had a modicum of success — once they cracked America — Bush didn’t sit on their heels. They doubled-down on the road work that had built their profile, riding the wave until it hit shore.

In critical circles Bush took more than their share of heat. Back home they were derided for ignoring the channels of hype and commerce that the British music scene required of its stars. No surprise the music industry in the UK was incredulous. Bush were seen as usurping the sales, chart position, radio play, and most importantly the money that had previously all been under the control of the clannish enterprises that spawned proper British careers like the Bay City Rollers or Duran Duran.

In the states, they were run down for wearing their influences, often American ones, on their sleeves, and for the un-Bunyanlike sin of having a good looking frontman and, well, putting him out front. All of that, thankfully, can be discarded as the temporal trivia it was, and like most questions involving music, their popularity can be explained by listening.

Bush’s music is proud of its inspirations, and Bush used the platform of their popularity to champion bands they thought deserved attention, taking a score of underground or breaking acts on tour with them and regularly paying tribute to the bands and songs that inspired them, occasionally covering the songs themselves to make it plain. I have worked in the studio with bands from the smallest to the largest, from those with no expectations to those with the grandest ambitions, and I am confident in ascribing genuine motives to Bush as I am of any band I’ve encountered. Through working with Bush they became friends, and I am as proud of their friendship as I am of any work I did for them. They made the music they did because they loved it and they got popular because they worked their asses off, and eventually other people liked it too. You cannot ask any more of an artist.