Mel Gibson wants his happy ending. And, whether you like it or not, he’s gonna get it.

Gibson’s first directorial effort in 10 years, Hacksaw Ridge, opens today and an overwhelming majority of critics agree it’s great. The film is alternately sweet and brutal, naive and complex, harrowing and hopeful. In telling the true story of World War II medic Desmond Doss, the first conscientious objector to win the Medal of Honor, Gibson has found material that suits his Jekyll and Hyde sensibilities, which oscillate wildly between a purity of faith and blood-splattered brutality.

Violence is integral to nearly all of Gibson’s films, but especially to his trinity of big-budget directorial efforts: Braveheart, The Passion of the Christ, and Apocalypto. In each of these films, the violence at least serves a clear purpose. In The Passion, the witness of Jesus’ suffering emphasizes his sacrifice, while Apocalypto uses violence to remind us we’re witnessing the death of a culture.

“Mel, I’ve learned, thinks in graphic, often violent, visual images,” says screenwriter Joe Eszterhas in Heaven and Mel, a 2012 e-book that chronicles his and Gibson’s failed attempt at a film version of the biblical story of the Maccabees. Eszterhas is nobody’s idea of a reliable narrator, and the book’s self-serving narrative is laughable at times, but there’s some fascinating insight into Gibson’s psyche buried in its lurid pages. 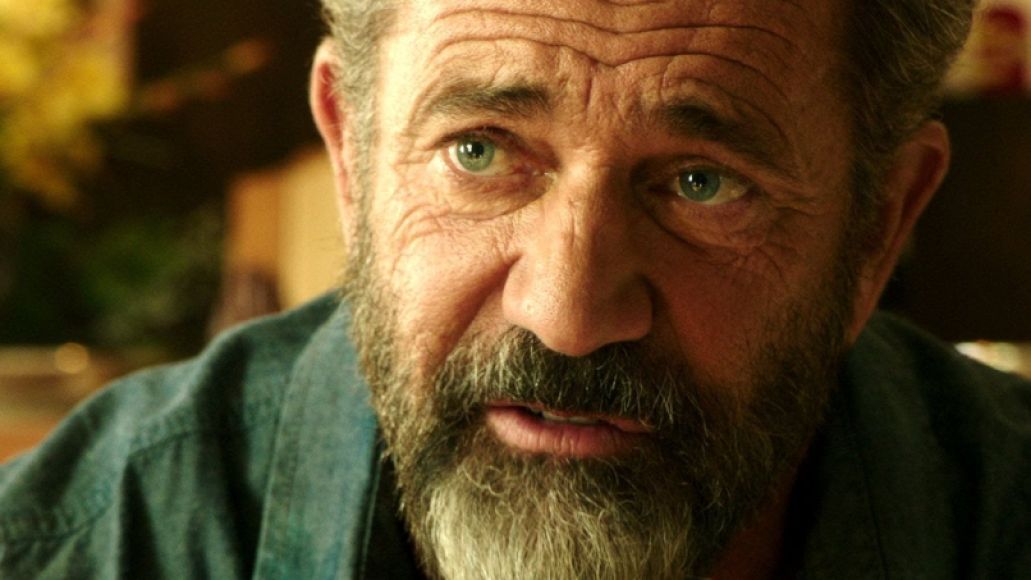 After all, Eszterhas collaborated with Gibson when the star was in the belly of the beast. In 2010, Radar Online leaked a series of recorded phone conversations between Gibson and his ex-girlfriend, Oksana Grigorieva. In them, he huffs, puffs, and threatens to kill her between spurts of racist, misogynistic hate speech. And this wasn’t his first dip in hot water: a 2006 DUI arrest gave way to a series of drunken outbursts, including one that claimed “the Jews are responsible for all the wars in the world.” That was caught on tape, too. Sony’s Amy Pascal called for an industry boycott of Gibson. Influential agent Ari Emanuel dropped him as a client at the William Morris Endeavor agency, and wrote an open letter stating that “[t]here are times in history when standing up against bigotry and racism is more important than money.”

That’s what the Gibson of Eszterhas’ book is dealing with. Eszterhas paints him as charming and repentant, but also angry and paranoid. During that time, Gibson wore a Blessed Mother medal around his neck, a symbol of his Catholic faith. Eszterhas, also a Catholic, had written a screenplay about the Lady of Guadalupe, and colleagues thought Gibson would be the right fit for it, not just in terms of his favored themes, but also because of how it might redeem his reputation.

Instead, Gibson proposed that he and Eszterhas make The Maccabees, the story of a Jewish rebel army. The project was doomed from the start. Though a Jewish story, Gibson couldn’t help but weave in Catholic images and allusions to Christ. He apparently told Eszterhas about a “Jewish-Masonic conspiracy to destroy Catholicism” and, when not dropping phrases like “oven-dodgers,” repeatedly called Grigorieva a “cunt.” Still, Eszterhas saw a childlike nature to Gibson’s faith, rooted in the mental image of his friend serving as an altar boy at the church he helped build in Agoura Hills.

“I have so much rage and no one can tell me where it comes from,” Gibson confessed to Eszterhas. Some might say from his father, Hutton Gibson, an outspoken Holocaust denier known for spreading any number of Jewish conspiracy theories. Some of Hutton’s attributed quotes are enough to make your stomach churn. Gibson was raised by someone who preached hate as much as they did faith. It’s no wonder he’s as conflicted as he is.

That’s no excuse, of course, but it speaks to the idea that Gibson is someone who operates at extremes. And you can see it, not just in Eszterhas’ book but in his films and even in the way he speaks about God. This is a man whose faith is the self-flagellating kind, a man who will bellow at God in anger before cowering in fear moments later. “God has turned his back on me,” he says to Eszterhas in one breath, only to turn around and assert that God “will bring me out” of “the mire of my own making.”

At his lowest point, Gibson was nothing short of unhinged. Just listen to the tapes, the ones with Grigorieva or even the tape Eszterhas himself released, in which you can hear him scream, “Fuck! Fuck! Fuck! Fuckin’ hate! Fucking cunt cocksucker whore!” Unhinged.

It makes sense, then, that he was drawn for so long to subjects who can, unlike him, keep it together under pressure. William Wallace, Apocalypto’s Jaguar Paw, and, obviously, Christ. But, aside from Christ, a figure Gibson knows well not to try and embody, these are men who must indulge their inner animal in order to persevere. Hacksaw Ridge’s Desmond Doss, on the other hand, is a different story. 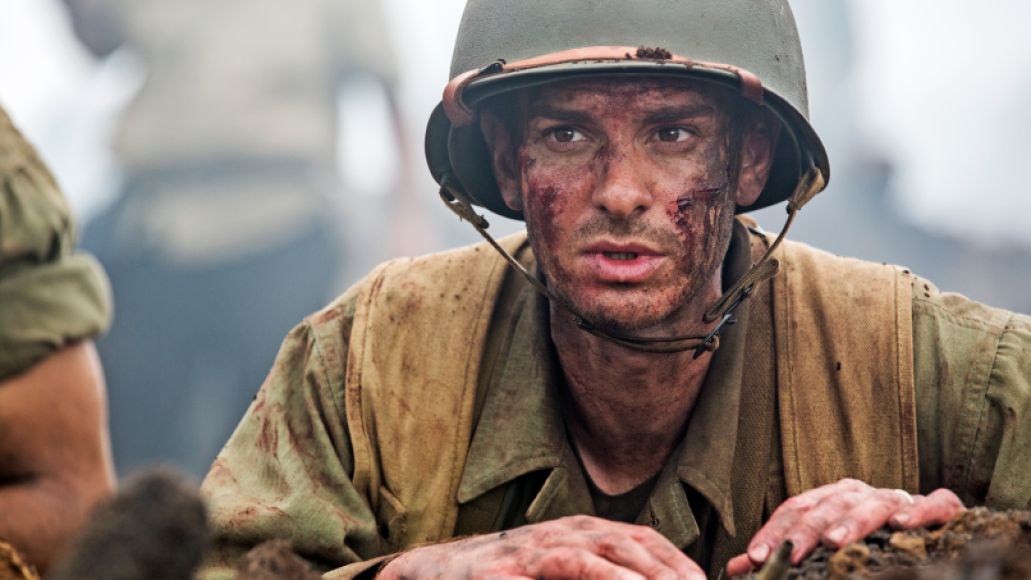 On Variety’s Playback podcast, Gibson said of Doss: “There’s very few people that can maintain their higher self and maintain that equilibrium and inner calm when everything around you is telling you to become an animal.” The appeal of Doss, a devout Seventh Day Adventist, is obvious. He is everything Gibson wishes he was: bold, brave, faithful, and, most importantly, in touch with an inner peace, a security of belief.

Even as Doss is mocked and, in one scene, viciously beaten for his nonviolent stance, he maintains his convictions. Even when he’s looking into the eyes of an opposing soldier who wants him dead, he refuses to debase his values. He ignores his comrades when they tell him there’s no saving a fellow soldier. Gibson isn’t Doss; he knows he’s no hero. It’s clear, however, that Gibson sees some of his own struggle in Doss’, if only because he failed in all the ways Doss succeeded. Gibson abandoned his own convictions, attacked those he loved, and questioned God. To carry oneself as Doss does — to not become the animal — is where Gibson sees his atonement.

Seventh Day Adventists, oddly enough, believe the Catholic Church is “the Whore of Babylon,” but that detail didn’t deter Gibson from Doss. That’s telling in itself, and is perhaps a sign that Gibson is no longer as dogmatic about his Catholicism as he showed himself to be in the past. One of Hacksaw Ridge’s most pivotal moments comes when, in the midst of battle, Doss finds himself alone. “Why am I here?” he asks God, but he receives no answer. God has abandoned him.

Yet he pushes on. There’s no sign from heaven, no ethereal voice or burst of inspiration. There’s just will. And bravery. In an e-mail to Eszterhas, Gibson raised the idea of divine intervention in the story of The Maccabees. “How does it manifest in a tangible way?” he wondered, frustrated. In Hacksaw Ridge, it doesn’t manifest. And that doesn’t mean Doss will abandon his faith, or falter in it. Doss never falters, not once. And, honestly, that’s one of the annoying things about Hacksaw Ridge. But Gibson wants to emphasize the power of the human soul to persevere in the face of hopelessness. And that’s a Gibson that is at least somewhat closer to peace.

And suddenly, the movie isn’t about God so much as it’s about the faith that faith can inspire. Nobody gives their life to God because of Doss’ actions, nor does Gibson go the easy route of painting Doss as a Christ figure. “It transcends any religion,” says Hacksaw Ridge star Andrew Garfield of Doss’ actions.

A scene in which Doss is lowered onto a stretcher could lend itself to the cross pose, but Gibson avoids it. And a lesser movie would frame a shower scene wherein Doss washes away the blood of the battlefield as a moment of resurrection. Gibson avoids that, too. We don’t have to be Christ figures. All we can be is human, so what kind of human will we be? Even after all he’s been through, Doss carries on. 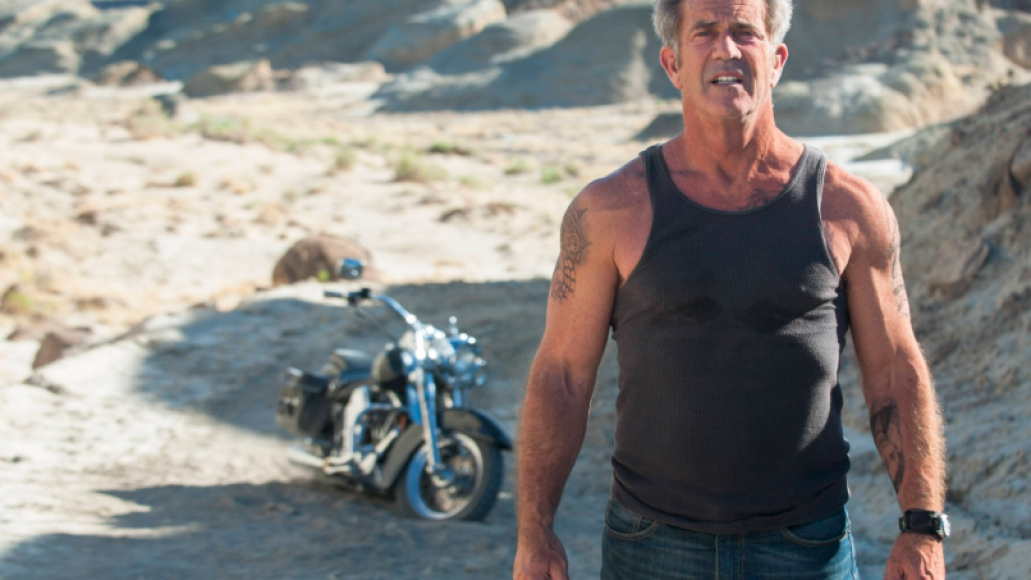 And that’s what Gibson wants to do. To carry on. To persevere. There’s talk of a sequel to The Passion of the Christ, a story of resurrection. When it happens, there’s likely to be an influx of takes on Gibson’s own resurrection, whether he’s earned it, and if this truly is his return to glory from the Hollywood blacklist. But Hacksaw Ridge tells a more interesting story: the story of a man, persevering in a state of hopelessness, to a chorus of cheers. Hacksaw Ridge received a 10-minute standing ovation at the Toronto International Film Festival, after all.

Gibson wants his happy ending. What that looks like, who knows. Maybe it’s doing an interview with someone who doesn’t bring up his past. On the Playback podcast, he tensed up when asked about the tapes of 2006 and 2010. “It’s a dim thing in the past,” he said. “I don’t understand why, after 10 years, it’s any kind of issue.”

That’s naive. But so was Doss. And Gibson’s only looking into the future. He wants that happy ending.

Mel Gibson's Back from Hell and He Wants a Happy Ending