How long does it take for someone to get used to something? It’s generally thought that habits form in 21 days, but swimming in cold water can feel natural within a minute or two. For Los Angeles to get used to Red Bull Sound Select filling up our November with concerts at our small and medium-sized venues, the answer is two years.

That’s how long its been since the first 30 Days in LA began with Cut Copy playing in a parking lot in Downtown LA. It was part of an ambitious series of events: 30 concerts, usually featuring three bands each, all held at different Los Angeles venues. Those rules have become looser as time has gone on (this year’s installment features more repeat venues than previously), but the idea remains the same: getting notable headliners to top bills that feature smaller Red Bull Sound Select artists, a chance to match lesser known acts with complimentary successes.

As opposed to the previous two Novembers, this was the first time 30 Days was expected. Even before the lineup was announced, music fans were speculating about whether it would return and who would perform. And now that November is here, advertisements have become ubiquitous, featured at bus stops, billboards, and even on the sides of buildings. At the moment, 20 of the 29 shows have already sold out (they’re skipping Thanksgiving this year), partly because of the lineup, but also because of the culture that surrounds the shows. There’s free food, Lyft promo codes, and nightly giveaways. Regardless of the size of the venue, the shows feel like events. 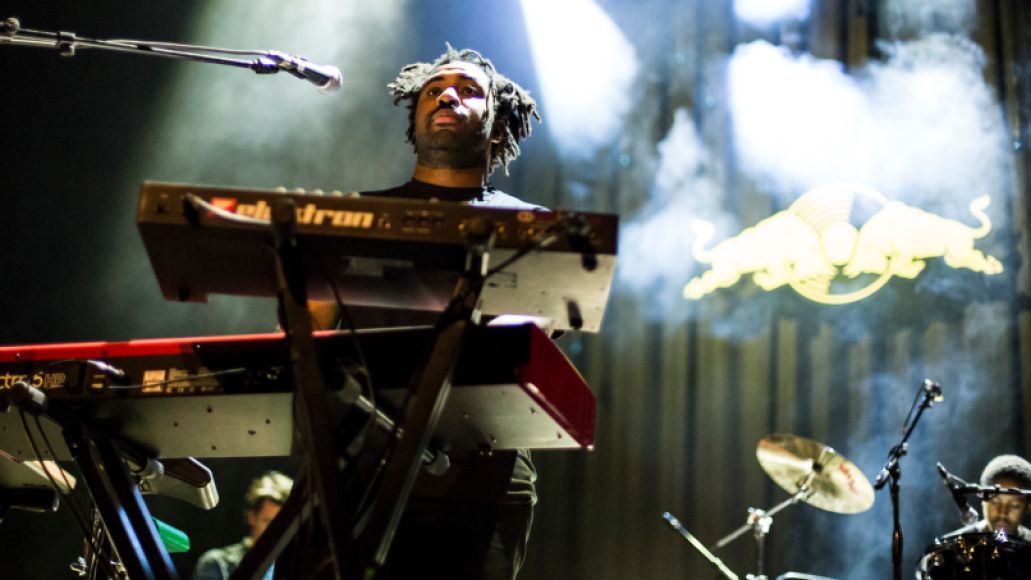 Opening a series that will include HAIM, Charli XCX and Sophie, Pusha T, and Car Seat Headrest was Sampha, getting a strong turnout for the rising British singer at the seldom-used Palace Theatre in Downtown LA. It’s weird to say the word rising when referring to him, just because he’s been prolific over the past five years if you listened in the right places. We popped up on Drake’s Nothing Was the Same and on Jessie Ware’s Devotion. More recently, he sung for Kanye on “Saint Pablo”, dropped in on the lesser of the new Frank Ocean albums, and worked on the new Solange album. That’s all in addition to featuring on many SBTRKT tunes, enough so that he was a touring member of the project in its initial incarnation.

But Tuesday night’s performance displayed an artist ready to stand out on his own. Playing with a four-piece backing band, it was his voice that carried the night. There were a handful of new numbers, including a standout from the encore, “No One Knows Me (Like the Piano)”. These seemed like a focal point of the show, with Sampha teasing that his first solo LP is still being worked on at the moment. Assuming the record finds its release in 2017, it’s easy to imagine him becoming a festival fixture for next year.

But fans reacted most to the old stuff. There was his song known for its Drake usage, “Too Much”, performed to a wealth of cell phones eager to snapchat the moment. Main set-closer “Without” received the biggest fan reaction of the night, showing that his 2013 EP, Dual, has been kindly taken to over the years. And playing solo in the encore, the night-ending “Indecision” found the singer capable of stripping his music down to its core. In less than an hour, Sampha had cemented the buzz that seems to be building for his debut LP, while 30 Days in LA had successfully launched a third year of their Los Angeles takeover.