Any space station that can readily be mistaken for a moon is going to cost a pretty penny to operate on a day-to-day basis, and the Death Star is no different. According to one estimate, the spherical super-weapon from the Star Wars franchise would have cost £6.2 octillion (about $7.76 octillion!) to run for just 24 hours. If that number’s hard to fathom, think of it this way: That’s actually 30 trillion times more money than there is on Earth. No wonder the Rebels resented the Empire so much — imagine what the taxes must have been like in a galaxy far, far away.

This half-fun, half-serious estimate comes courtesy of Ovo Energy, an energy supply company based in Bristol, England. In honor of the upcoming release of Rogue One: A Star Wars Story on December 16th, the company teamed with Alexander Barnett, a math professor at Dartmouth University, and Stephen Skolnick, editor of Physics Central, to crunch the numbers on the Death Star’s operation costs. (Thanks to Mental Floss for the tip). Not only did they account for such important factors as keeping the lights on and feeding the crew of over two million, but they also sketched out rough estimates for how much it costs to destroy a planet with a super-laser.

Check out the full breakdown via infographic below, and may the Force be with those accountants. 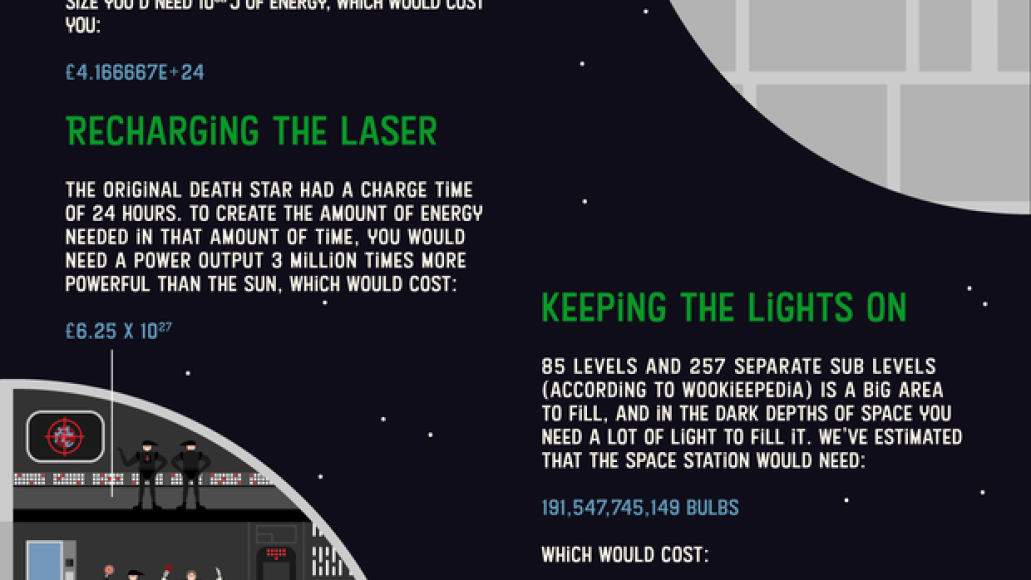 We should note that this isn’t the first time people have tried to crunch the numbers on the Death Star. Back in 2012, a group of economics students from Lehigh University used a slightly different methodology to arrive at a figure of $852 quadrillion just for the steel required alone. Either way, the costs verges on the unthinkable — but isn’t that what science fiction is for?

The Death Star from Star Wars would cost $7.7 octillion to operate for just one day