Dusting ‘Em Off is a rotating, free-form feature that revisits a classic album, film, or moment in pop-culture history. This week, Dominick Suzanne-Mayer returns to Tim Burton’s kitschy 1996 alien invasion homage as a moment in which a director at the height of his powers indulged his campiest instincts to grand effect.

By 1996, Tim Burton could’ve pretty much made any film he wanted. Just look at the seven-year run leading up to that point: Beetlejuice, Batman, and Batman Returns for Warner Brothers, along with Edward Scissorhands and Ed Wood at 20th Century Fox and Touchstone, respectively. Hit after hit after now-classic hit. Particularly after the bleak, expensive gamble of Returns paid off (the production took up half of Warner’s backlots and attempted to use live king penguins at one point), Burton had the clout to turn out just about any project he wanted. He landed on following Ed Wood with a luxe tribute to the kind of filmmaking Wood loved most: paperback sci-fi schlock.

Mars Attacks! started out the way so many films do: as a pricey, feature-length adaptation of a series of scandalous Topps trading cards from the early 1960s. Basically, the kind of movie you make when you know that nobody will tell you “no.” An early version of the project would’ve carried a budget of over $200 million, which would be expensive today and would have been patently absurd 20 years ago. Yet these were the ‘90s, a time when studios would still throw unreasonable amounts of money at speculative projects by noted auteur filmmakers. (It’s the sad genesis of today’s bloated, brand-minded filmmaking: Hollywood kept the overpriced franchise starters and sequels, but pared down on all the volatile, excessively paid filmmakers that made so many of them worth watching.)

All this for a movie about hideous, green aliens destroying Earth with laser beams. Burton dug deep into his bag of aesthetic tricks in order to make what really is essentially a stunt-cast Wood film with $70 million at its disposal instead of a few grand at a time. The Topps series imagined the colonization of Earth by the brain-exposed Martians, who wreak havoc until Earth fights back by detonating nukes on Mars, ensuring our continued intergalactic sovereignty. (The postwar ‘60s, everyone.) At the time, some were upset by the surprisingly graphic violence of some of the cards; even today, there’s something a little horrifying beneath the garish, cartoonish designs about the ugliness of its version of the end of the world. 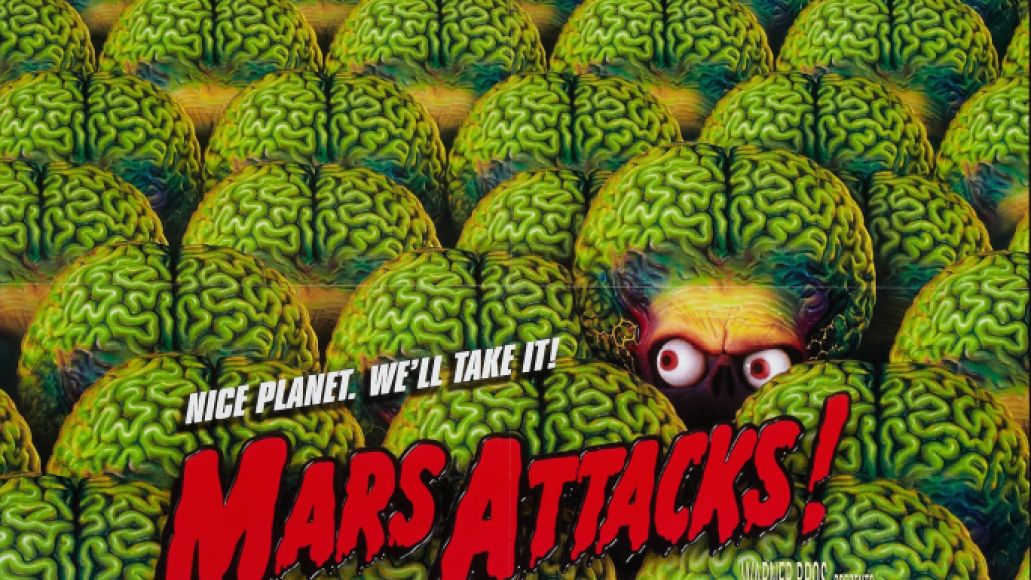 To best capture the spirit of the original trading card run, Burton retained the bug-eyed character designs and ladles on both the kitsch and the nastiness of the series throughout the film. Pitched as both an homage to and riff on the Wood films, and peppered with a fair deal of pointed satire (not exactly a common mode for Burton, who’s long preferred the surrealism of dream worlds to the ugliness of reality), Mars Attacks! works through the paces of a Martian invasion, mostly focusing on its impacts on Washington D.C. and the federal government, and also Las Vegas. In the film’s eerie opening, a herd of burning cattle race down the street past an unsuspecting family’s farmhouse, and then a flying saucer right out of Plan 9 From Outer Space takes off from behind them. Later, the saucers will land with spider-like appendages protruding from the bottom. Somewhere, Jon Peters smiled.

That’s hardly the last time in which Mars Attacks! toes the fine line between throwback genre homage and genuine terror. In the interest of getting back to the invasion stuff, Jonathan Gems’ screenplay (co-written with Burton, who’s uncredited) quickly whips through the character introductions: Jack Nicholson as a thoroughly Jack Nicholson version of the President, Glenn Close as his daffy First Lady, Natalie Portman as their slacker-chic daughter, Martin Short as a lusty press secretary, Sarah Jessica Parker as a ditzy reporter, Pierce Brosnan as a skeptical, pipe-loving scientist, Michael J. Fox as Parker’s embattled reporter boyfriend, Annette Bening as a Vegas star-child, Nicholson again as her swaggering high-roller lover, Jim Brown as a former boxer-turned-casino attraction, Lukas Haas as a soulful ‘90s teenager obsessed with aliens, and eventually, Tom Jones as Tom Jones. (And many more!)

The introductions are all preamble and hilariously unnecessary given the length of time it takes for a number of those cast members to be quickly dispatched. In what’s at once the film’s funniest and most unsettling setpiece, the American military (along with a small influx of hippie types) meet the Martian ambassador in order to open a line of communication and establish the nation’s interest in a peaceful treaty between worlds. The ambassador declares that they’ve come in peace (via the reversed duck sounds used to create the Martians’ braying language), somebody in the crowd releases a dove, and the ambassador vaporizes the dove before laying waste to most of the people in attendance with lasers that have the revolting effect of burning its targets’ flesh and organs off, until only a neon-colored skeleton remains. Burton styled the skeletal remains to be either bright green or bright red, because of the film’s scheduled Christmas season release, as you do.

Much of Mars Attacks! follows this trajectory, at once darkly comic and nasty in that War of the Worlds kind of way. Even by Burton’s generally grim standards as a filmmaker, it’s a particularly vicious piece of work, both in its stylistic choices (at one point a comely woman’s face is torn off to reveal Martian teeth, at another Parker has her head grafted onto the body of a Chihuahua and meets cute with Brosnan’s severed head) and in its satiric approach to governance. The film’s “war room” sequences function as a sustained homage to Dr. Strangelove, from Nicholson’s confused, burnt-out performance to Rod Steiger’s turn as a cartoonish “annihilate! Kill! Kill! Kill!” type. Yet Burton’s larger point seems to be that when the end of the world comes, we’ll all be too busy playing video games and indulging in kitsch to really care all that much. It’s a distinctly slacker-era perspective, but one that works surprisingly well beneath what’s first and foremost a style exercise.

And it has style to burn. In addition to the character designs, which started as stop-motion creations and were eventually made digital due to budgetary concerns, longtime Burton collaborator Colleen Atwood’s costumes hit the right notes of garish flash, from Parker’s hot -pink professional dress to the Martian temptress’ painted-on swirls of red glitter to Brown’s sphinx armor, the latter of which make for one of the film’s better running visual gags. (The visual of him and a lipstick-heavy Bening sprinting through Vegas as the world falls apart is wholly satisfying.) Wynn Thomas’ production design ably captures the film’s many anachronisms, particularly in the Vegas sequences, situating the film outside of any one era, even as it clearly hearkens back to the source material. It’s the apocalypse covered in neon and polka dots, a big sandbox in which Burton gets to slam his action figures together and pull them apart from time to time.

If the film plays more like a series of comics haphazardly stitched together than a straightforward film (it’s a genre exercise first and a piece of cohesive storytelling a pretty distant second), Mars Attacks! still has its campy pleasures and sees a director who’d one day give himself fully over to those impulses a chance to experiment with them in a relatively harmless form. Yet it’s also a nihilistic piece of work; by the end, nearly every major star in the film has died onscreen or otherwise, and the few characters remaining return to an America in which basically nothing is left. But since this is still a comedy above all, freedom is achieved by way of Slim Whitman’s “Indian Love Call” (it makes their heads explode), and the film ends with woodland creatures surrounding Tom Jones for a spirited rendition of “It’s Not Unusual”. Mars Attacks! is far from one of the director’s more accomplished works, but it’s also a fascinating window into the kind of thing he’d make with few to no limits.

The film’s most interesting corollary, even beyond the Wood films, is Independence Day, a happy accident given that they were produced around the same time. Roland Emmerich’s famed, planet-smashing blockbuster was released just a few months prior to Mars Attacks!, which allows Burton’s feature to function as something of a piss-take on that film’s bombastic destruction. Despite Independence Day only costing around $5 million more than Mars Attacks!, there’s an expense and scope to that film that’s capably satirized by Burton, whether in Nicholson’s inspiring climactic speech to the Martians being punctuated by his being impaled through the chest by the Martian flag or in how characters tend to just watch their loved ones die and then move on with the story. It’s entirely a happy accident, but since Hollywood came to follow Emmerich’s lead far more than Burton’s in the following years, it feels like a necessary potshot at the destructive bloat of more and more movies of the time, even as it’s also trafficking in the very same after a point. (In fairness, Burton intended to follow Mars Attacks! around the world, as suggested by early drafts of the screenplay, and was reined in later on.)

In Burton’s filmography, Mars Attacks! is a bit of an odd digression with a slight flop reputation to it (it made its money back, but was hardly the blockbuster some expected) and an outlier for a director who’s rarely committed to this level of cynicism. But whether taken as a stunt, an era-specific curiosity, a loving homage, or a pulp throwback, it’s oddly enjoyable in that intangible, “this would never get made today” sort of way. As auteur projects about shrill aliens bouncing their way through America like obnoxious teenagers go, it’s certainly the most notable that comes to mind right away. And it envisions a future where we still have two out of the three branches of government working for us, and that ain’t bad.