Save for flying pigs, the motto “anything goes” really did apply to 2016: The Chicago Cubs won the World Series. David Bowie and Prince sadly turned out to be mortal human beings. Donald Trump won a presidential election. Guns N’ Roses reunited.

A year ago, we would have likely rolled our eyes at that list, and yet some did as it happened. When it was formerly announced that Axl Rose, Slash, and Duff McKagan were actually going to share a stage together for the first time in over two decades, the most common, casual response was, “Yeah, we’ll see how long that lasts.” Few ever expected it to work, and even fewer anticipated it to last this long — and for good reason.

Bottom line: The Los Angeles rockers are notorious assholes. If there’s one takeaway from their entire legacy, it’s not the number of albums they sold or the size of the stadiums they toppled; it’s how they let their own personal egos and machismo shatter what should have been a far more epic and viable band. Instead, the riffing, the roaring, and the clashing make up the majority of their ill-fated mythology with the blame on just about everyone. 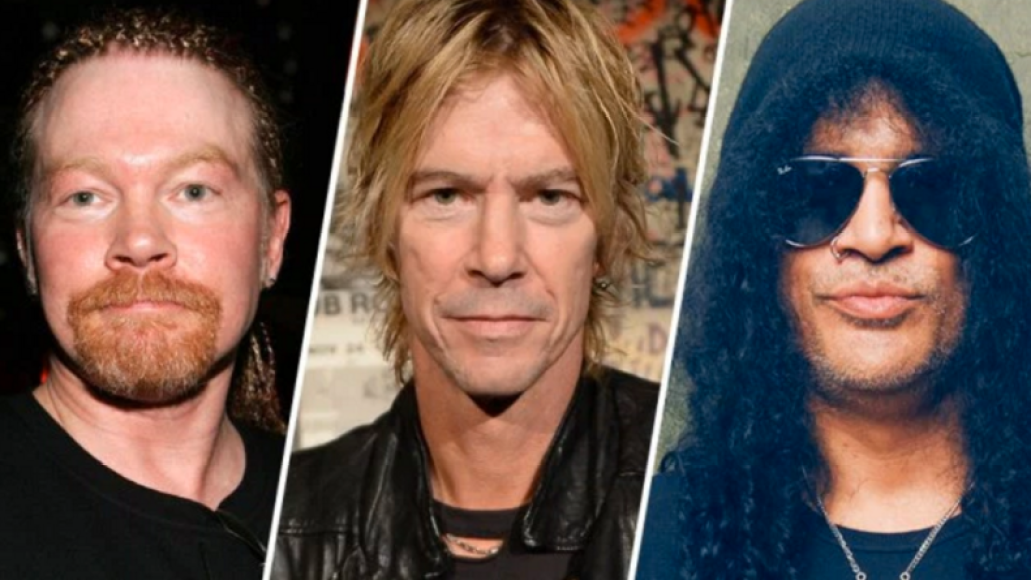 So, it makes sense why longtime fans with any kind of logic might have seen the sizable itinerary for their Not in This Lifetime Tour and thought this whole thing was a recipe for failure. Maybe, just maybe, they’d get through the seven dates in April, but two months of non-stop touring? Madness. Who insured this? How in the hell was Goldenvoice gonna sleep at night leading up to their two performances at Coachella?

That fear was only compounded when Rose broke a bone in his foot, warranting a video interview with his orthopedic surgeon, who explained how she put the singer in a cast and insisted he not put any weight on his feet. At the time, it was all but a death knell for the reunion — and really, it might have been on any other year or during any other tour given Rose’s proclivity towards cancellations — but somehow the hurdle curiously rejuvenated the guy.

Like some bandana-wearin’ phoenix rising from the ashes of solitude, Rose bounced back with aplomb, not only sticking to the band’s touring schedule but also appearing on time for once in his life. What’s more, he found an unexpected friend in former Nirvana rival Dave Grohl, who came to the rescue by loaning out his now-iconic, custom-made Foo Fighters’ throne, which he had used when he broke his own leg on tour last year. 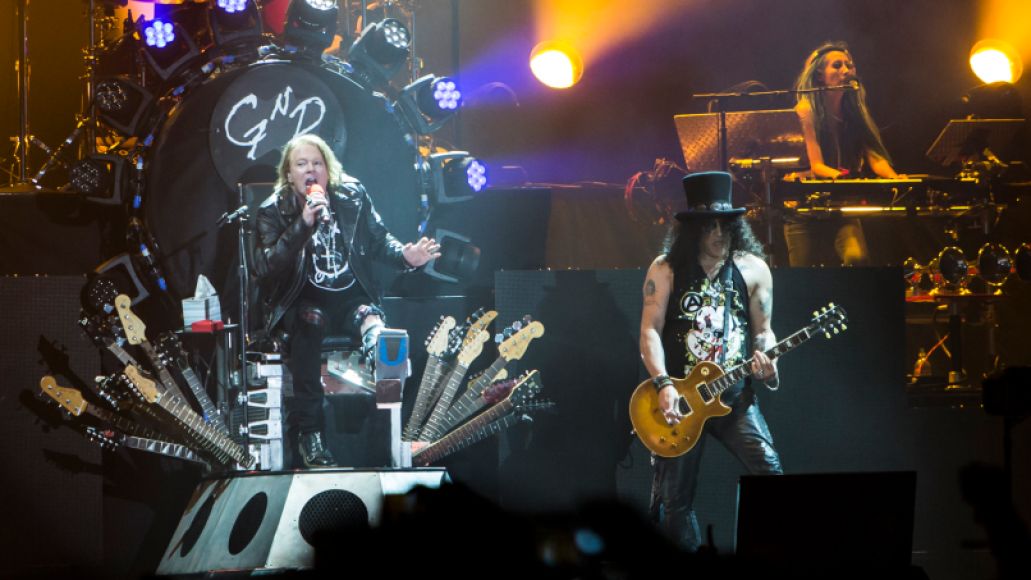 The situation wasn’t optimal by any means, but it worked, especially for the thousands of fans who caught their two opening gigs in Las Vegas and the festivalgoers who flocked to see them at Coachella a week later. Our own Associate Editor Collin Brennan described their festival set as “consummately professional,” arguing: “Rose’s limited mobility posed a problem in terms of visuals, but his swagger was apparent at least in his bejeweled torso, and his voice stayed strong through the set’s latter half…”

By the time things picked back up in June, Rose was out of his cast, off the throne, and back to his older self, huffing and puffing about the stage like the manic frontman that sold millions of tickets way, way back when Eddie Furlong was still a cute star. Hell, not even an impromptu stint with AC/DC, which found Rose stepping in for singer Brian Johnson, proved to be a problem. Instead, the whole thing became just another pleasant chapter in an unseemly pleasant reunion.

Some might argue such pleasantries have been disappointing, that everything’s been too easy, too cookie cutter, too pre-destined to feel like this is anything more than an easy cash grab. Really, you’d have to be crazier than Steven Adler to think that this was a legitimate, bona fide reunion. One glance at their limited-edition, John Varvatos-tailored merchandise proves these are hired Guns, and another glance at their receipts reveals they’re successful ones, too. 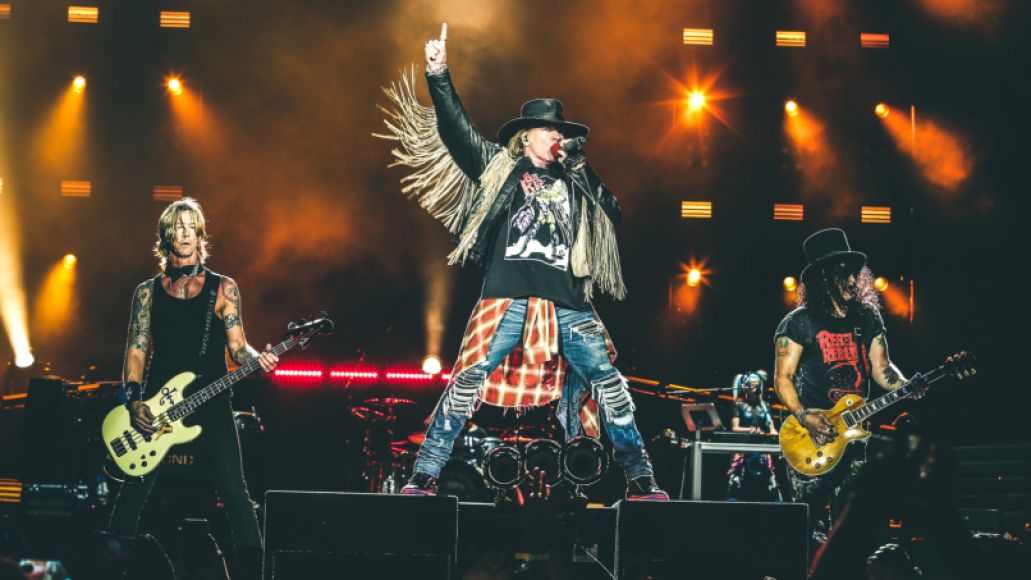 But, there’s nothing wrong with that. The world doesn’t need another Guns N’ Roses album and neither does the band. What would they say at this point? Who would they appeal to? Think about it: Everyone who wants to see Guns N’ Roses went to see Guns N’ Roses this summer, and if they’re anything like the crowd I experienced at Chicago’s Soldier Field, they’re not interested in anything new. They want Appetite for Destruction, they want both Use Your Illusions, they want a spectacle.

And that’s what they got.

“This summer tour is a big-budgeted blockbuster that chews on every penny,” I wrote in my not-slim review, “from the dazzling, state-of-the-art video accompaniments to the glut of pyro to the grand piano that pops up on stage at the end for ‘November Rain’ and ‘Knockin’ on Heaven’s Door’.” In the end, I called the night “a feel-good stomper, the type of sleazy, fuck-all escape that comes from listening to Guns N’ Roses in the first place.”

Look, I’ve seen these type of monumental cash-ins over the years, from The Police to Mötley Crüe to Van Halen. Most, if not all, do the same song and dance each night, refusing to shake things up, tossing out redundant one-liners, and playing strictly hits. That last part is by far the more infuriating notion, namely because these titans are sitting on dozens of exceptional songs, and if they’re not playing ’em here, where do they belong?

To be fair, Guns N’ Roses stuck to boilerplate setlists, but they also dusted off nearly 50 songs throughout the year. Sure, a few were forgettable covers of The Damned, Misfits, and Iggy Pop, but there was also an impressive selection of deep cuts reserved for special occasions. These ranged from a glut of Chinese Democracy tracks to more fan-friendly fare like “Used to Love Her”, “My Michelle”, and “Yesterdays”. The fact that sprawling epics like “Coma” and “Estranged” were nightly staples only spoke to their brazen commitment to deliver the goods.

Of course, the biggest surprise of this reunion has been Slash and McKagan’s open-door policy toward anything off Chinese Democracy. It may seem rather slight, but hearing the two take over songs like “Better” or “This I Love” has been a revelation. For over a decade, die-hard fans have yearned to see and hear the original Guns tackle the “newer” stuff, and while they don’t sound that different than what’s on record, their involvement has added a certain gravitas.

With reunions of this magnitude and of this rare caliber, you take what you can get, and Guns N’ Roses have offered quite a spread for the taking, one that’s going to carry over into 2017. That’s not the least surprising; after all, there’s still more money to be made, and that’s the only inspiration these guys need to get out there and do their “thing.” But again, it’s a spectacular “thing,” an impossibility that goes against the odds that have always been leveled against them. That’s the type of comeback narrative anyone should want from a reunion and the kind of epilogue Guns N’ Roses have long deserved.

Welcome back to the jungle, boys.