Arcade Fire return today with a brand new song called “I Give You Power”. A collaboration with Mavis Staples, it’s the band’s first new recording since 2013’s Reflektor. Listen below via YouTube or via TIDAL.

The track’s origins may date back to an impromptu performance in Paris over the summer, but there’s no denying it’s political timeliness given we’re on the eve of Donald Trump’s inauguration. “I give you power,” Staples and Win Butler can be heard singing throughout, before later warning, “I can take it all away — watch me!” Chunky synths lurch all around them for an arrangement that marries Staples’ soulful sound and Arcade Fire’s Reflektor-era quirkiness.

In a tweet accompanying the song’s release, Arcade Fire write, “It’s never been more important that we stick together & take care of each other.” All proceeds will benefit ACLU.org.

“It’s easy to get sucked into sitting on the couch and checking your news feed and watching things on CNN and we’re just musicians and the only thing we have to offer is our music,” Butler added during an interview with Zane Lowe Thursday evening. “I talked to Mavis last night and she said now more than ever we just need to hold onto each other for us it’s a feeling of solidarity — to not feel powerless and focus on what we can do as individuals and try to do our part.”

As we reported earlier this month, Arcade Fire have finished recording their new album with plans to release it later this year. It remains to be seen whether “I Give You Power” will appear on the album.

“I Give You Power” Artwork: 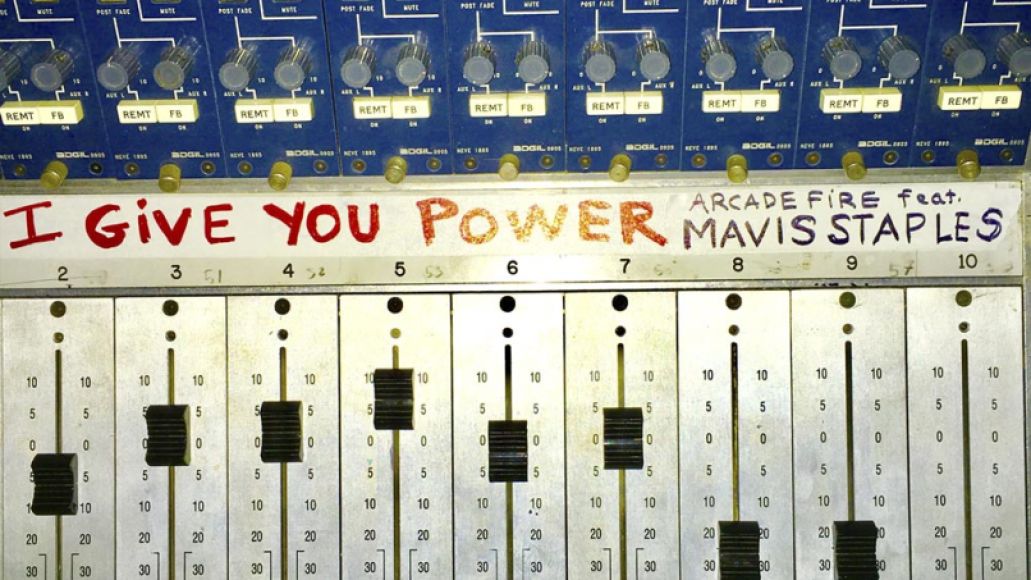