Beach Slang have kept right on trucking since parting ways with guitarist Ruben Gallego back in the fall. They’re part of Polyvinyl’s new Singles Series, they covered Green Day’s “2000 Light Years Away”, and now they’ve announced the second entry in their Here I Made This For You covers mixtape series.

Here I Made This For You Volume II comes a bit over a year after the first volume was released in 2015. The five-track collection was recorded over two September days at Asbury Park’s Lake House Studios.  The tracklist includes covers of The Candyskins (“Wembley”), Tommy Keene (“Nothing Can Change You”), The Jesus & Mary Chain (“Sometimes Always”), and The Modern Lovers (“Roadrunner”).

As a first taste, Beach Slang have shared their take on The Adverts’ “Bored Teenagers” — a fitting choice considering their recent full-length was called A Loud Bash of Teenage Feelings. James Alex does the short-lived but influential UK punks proud, delivering a faithfully ripping rendition that perfectly suits his raspy bellowing. Take a listen below.

Here I Made This For You is due out February 10th via Polyvinyl. Pre-orders are ongoing. Find the cover art and tracklist below.

Here I Made This For You Volume II Artwork: 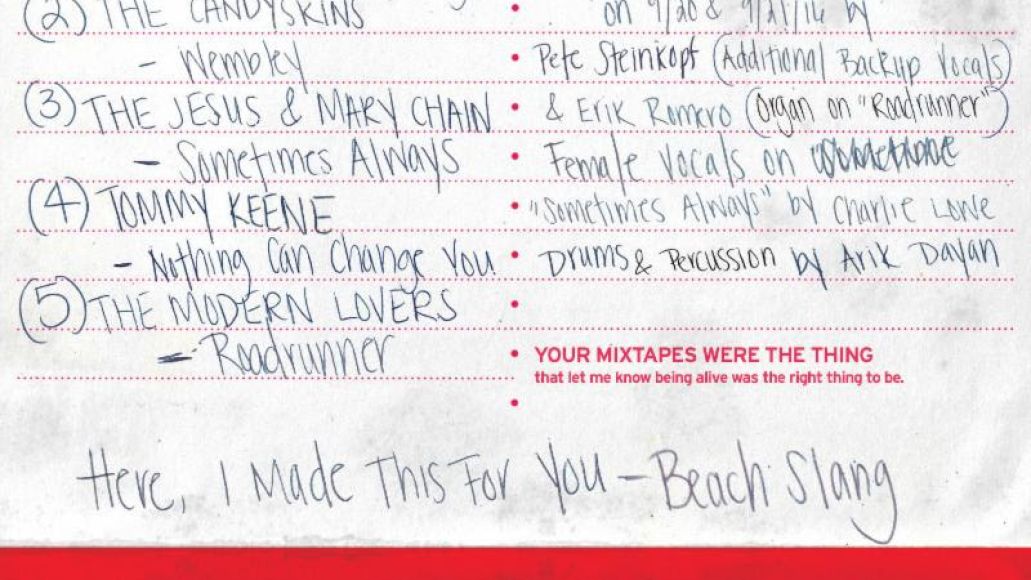 Here I Made This For You Volume II Tracklist:
01. The Adverts – “Bored Teenagers”
02. The Candyskins – “Wembley”
03. Tommy Keene – “Nothing Can Change You”
04. The Jesus & Mary Chain – “Sometimes Always”
05. The Modern Lovers – “Roadrunner”
Advertisement