Right now, it’s 50 degrees in Los Angeles — and in most parts of America, it’s much, much colder — so music festivals aren’t exactly a priority. Of course, that didn’t stop Coachella from announcing its 2017 lineup yesterday, kicking the festival season into high gear. For those keeping track, this year’s installment will be Goldenvoice’s 18th soiree to date and will take over Indio, California, on the weekends of April 14-16th and 21-23rd.

By then, it’ll be warmer. We promise.

In the meantime, let’s take a look at the lineup, starting with the top of the bill. Although we’ve known that Beyoncé, Kendrick Lamar, and Radiohead would be headlining since November, their bookings remain quite impressive. Queen Bey is coming off her most critically acclaimed album; Kendrick Lamar completes the Goldenvoice trifecta after topping last year’s bills for Panorama and FYF (maybe they got a group rate?); and Radiohead is Radiohead.

Beyond that, there’s a lot to be said about this year’s lineup. Gone are the blockbuster reunions that have brought back the likes of OutKast, Postal Service, Guns N’ Roses, and LCD Soundsystem. Instead, there’s the surprising, albeit niche, comeback of The Belleville Three, and while some might argue all the big reunions have already happened, the most obvious answer is that Coachella knows it doesn’t need to get bands back together to sell tickets. 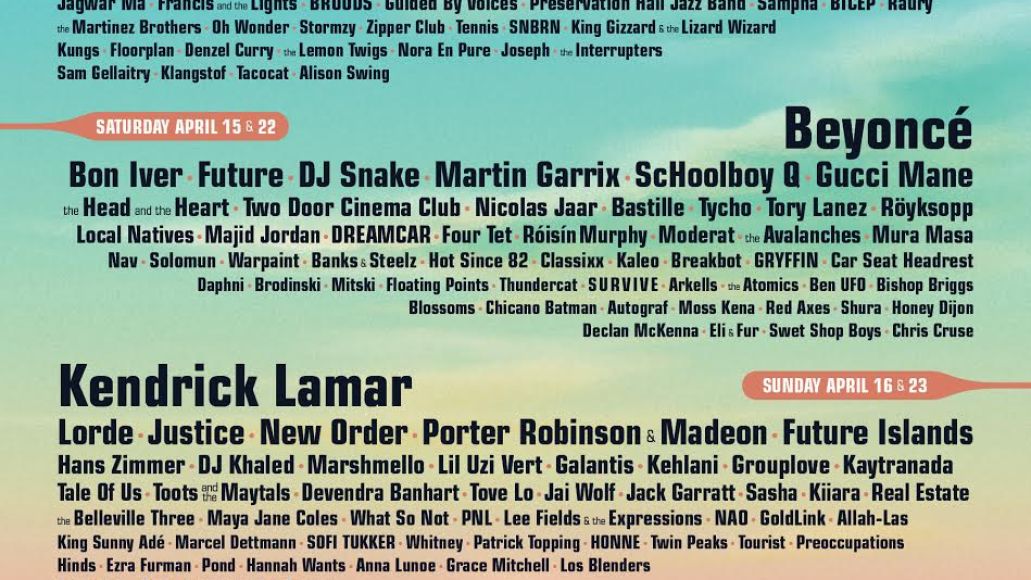 No, Coachella’s brand has shifted. For years, the festival has ridden and often predicted industry-wide trends with stacked lineups of varying genres. This year, however, is something different entirely and arguably delivers its most mainstream lineup to date. Yet, it’s one that is honest with what appeals to its largely young and affluent fanbase. It’s championing the sounds of the radio, the ubiquitous songs that have captured an entire culture.

Sure, there’s still an elevated level of taste at hand that appeals to the critics out there — after all, you don’t book Bon Iver, Hans Zimmer, Mitski, and The Avalanches strictly to sell out the festival — but it’s quite apparent that Coachella in 2017 is more or less a festival with nothing to lose. Besides, Coachella isn’t about the lineup so much as it’s about what happens during the festival, and that’s a trend to be followed in itself.

With a strong focus on creating moments, mostly with special exclusive guests, the names we see today will eventually take a backseat to the story that’s yet to be told. Will Kanye show up? Drake? Justin Bieber? Last year saw fucking Bernie Sanders introduce Run the Jewels via a taped video. Come April, there will be a host of talking points that will largely dictate the identity of the festival, and for that, no other festival comes close.

Naturally, that didn’t stop us from picking the poster apart in the pages ahead…