It’s coast vs. coast and California already played the first move. Right on the heels of Coachella’s highly-anticipated poster, Governors Ball rolled out their lineup and tipped their hat to the festival giant while boasting their own grabs. It’s only the New York City festival’s seventh edition, but they’re planning to bring some heat come June 2nd, despite the limitations of Randall’s Island.

For one thing, the top of the bill is full of surprises — if not because of dodged rumors, then because of faces that aren’t shoe-in staples. There’s Chance the Rapper who grew in size last year, tackling everything from politics to late-night shows, and who Coachella failed to grab. Next is Phoenix, the French act that will get everyone dancing without being overly obnoxious about it. Childish Gambino steps up to bat fresh off a dramatic stylistic change full of soul. And, of course, Tool, a band who’s hard at work on their first new record in over a decade but whose fanbase is still growing despite the silence.

Considering how Gov Ball started, it’s comforting to see their growth in booking over the years. A couple of guys decided to start a music festival, so they poured their money into it, tried to make friends, and managed to pull it off based on good intent and even better passion. Now they got acts that span generations like Wu-Tang Clan and The Avalanches. They grabbed Lorde and Logic in the same breath. Sometimes when you’re young and dumb, your dreams become a reality that benefit thousands in the heart of the Big Apple. 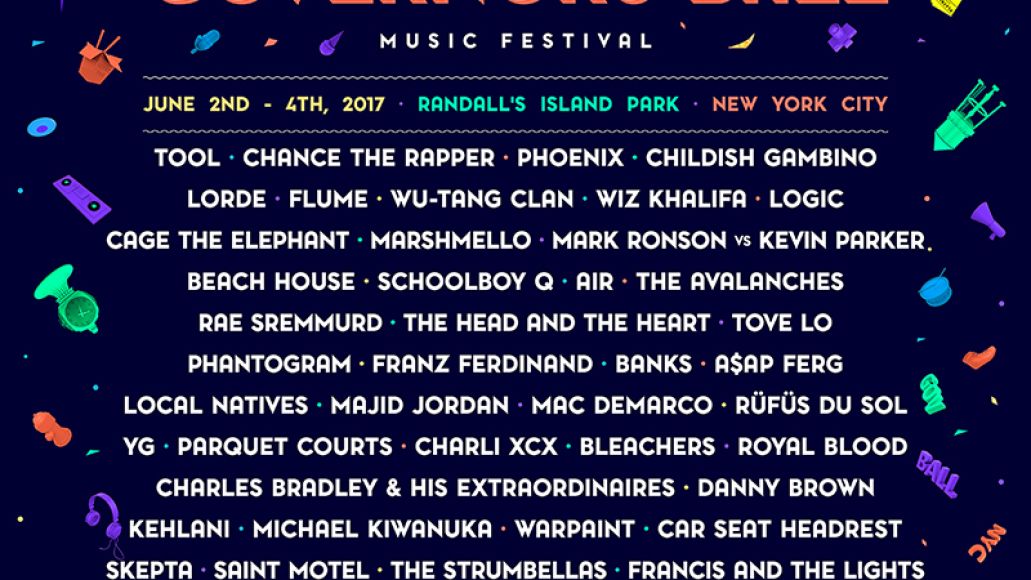 Despite this, the festival has become less a voice for New York City than it has for trendy teens. Recent years has seen the grounds swarming with high schoolers and college kids, hoping to catch the acts they may otherwise be too young to see at bars or venues. So, how do you handle that? Cater to them, of course. YG, Local Natives, Marshmello, Mac DeMarco, Charli XCX, and Banks all warrant places in future Snapchat stories.

But the city’s music obsessives — and also those in New England who drive down — will be pleased to see a solid undercard as well, from indie rock (Parquet Courts, Warpaint, Franz Ferdinand, Car Seat Headrest) to hip-hop (Skepta, Danny Brown, A$AP Ferg) to R&B and soul (Kehlani, Charles Bradley & His Extraordinaires, Francis and the Lights) to electronica (The Range, Phantogram, RÜFÜS DU SOL).

At last, 2017 is the year that Governors Ball gets to throw curveballs of their own for a different coast filled with music fans. They may not have ridden the AEG wave, but they built a sturdy foundation and climbed it. How that all pans out for them is left to the distant future, though, naturally, that didn’t stop us from trying to predict how it will unfold anyway. Click on ahead for our complete rundown of the festival, from highlights to omissions.