Before sifting through each of The Flaming Lips’ albums with Wayne Coyne, I refer to his catalog of recorded material as a “vast discography” — which elicits a chortle from the legendary musician. He agrees with the assessment, though seems to be a little bit incredulous that he’s carved out such a career. “Fuck! I have a lot of energy, and I think the biggest part of it is that nobody has stopped me,” he laughs. “I’m just lucky.”

But there’s clearly something more than luck at play in his band’s success. Looking through The Flaming Lips’ catalog, despite their massive genre experimentation, eccentric collaborations, and wild ideas, the uniting factor is an unrelenting drive to keep on going. “I think you have to be intense, or it’s not going to be interesting,” Coyne admits. “I try to tell people that you can’t think your life up and then go live it. You really just have to live it. All of it. There is no path that you can light up and then walk on.”

Though there was no lighted path that led from Hear It Is to the brand-new Oczy Mlody, it’s a fascinating experiment to trace their journey in hindsight, to look back at each album and analyze its impact and origin. Some revealed a spirit that occupied a musical discussion, and others yielded a more emotional response. And there’s no better guide than the man himself, Coyne offering his thoughts and ideas, oftentimes wandering through long pauses and dusting off old anecdotes on the “vast discography” that he never expected to come to pass.

Take it away, Wayne! 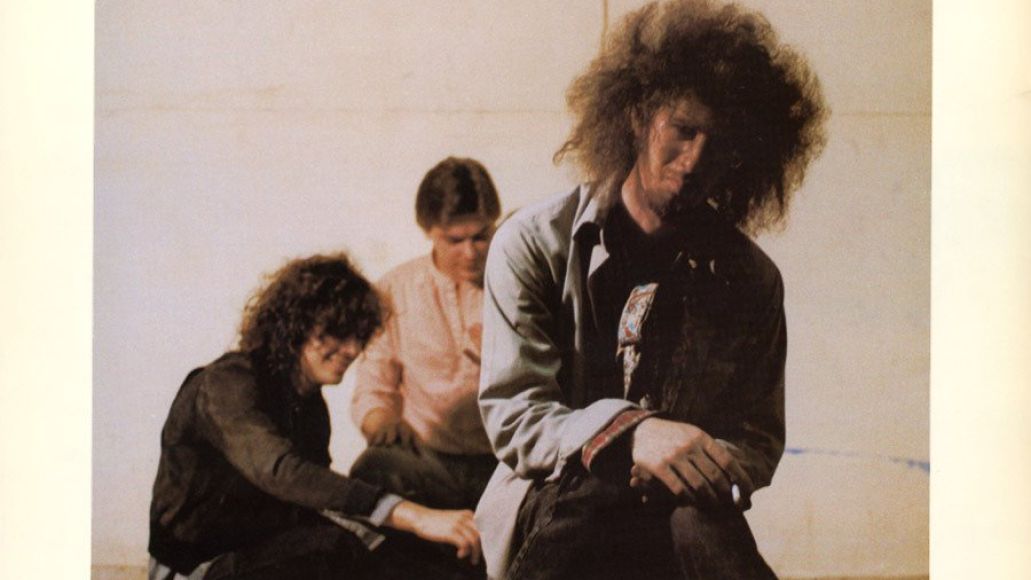 The Flaming Lips’ first official LP also marks the point at which Wayne Coyne took the frontman role, carrying the relatively straight-ahead rock ‘n’ roll that they relied on upon their formation. There are certainly signs of the psychedelic haze to come, but Coyne, Michael Ivins, and Richard English took some time to find their oddball footing.

Well, weirdly enough the first record we actually made was in 1983, and it came out right at the beginning of 1984. It’s just a little six-song half-record. Back then, nobody that I knew personally made records. We were only a band for about six months or so, and then we decided we’re just going to make a record. Looking back, I think it was a really good thing for us. We didn’t know much. We kept going back into the studio, and at the time, we felt it was kind of amateur to have to redo songs. Now, I look back and don’t feel the same way. The fact that you get to rethink and try again and again is great. During that first album, we really discovered that we liked recording and messing around in the studio and not necessarily being just about a personal talent. You get to build things up like a painter would build up painting on a canvas.

In the beginning, all of us were kind of introverted, you know? None of us wanted to be the singer and none of us wanted to be the star. My brother wasn’t a very good singer; well, none of us thought we were very good singers at all. We would go out and play shows around America and stuff, and he didn’t really like doing that. He wasn’t having very much fun doing that, so he quit, and I just started to sing out of sheer, ‘Well, someone’s got to do it!’ Everybody thought I should be the singer anyway, but I was never … well, I’m not a very good singer even now. We are all not shy, but we thought we could do stuff and make it sound cool by messing with it. That’s been our biggest thing, to not fear that we can sound cool.

If you listen to Hear It Is, it’s radically different to who we are now. If you didn’t know it was the same group, you could easily like what we do now and really hate what we did then. Some people would see that it’s just an evolution of personalities. I loved those early records because they are just so far away from who I am now. I see them being done by a different person. They are just ridiculous, ridiculous records. The part of our past I really like was how it was always a little bit of a surprise. There was no particular style; it was just very freaky music. That first album forced me to find a way to sing more emotionally. Back then, it was a lot of screaming and out-of-tune guitar. We are always trying to be more emotional, and if we hadn’t been able to do that, we would have stopped and killed ourselves.

There’s a song on there called “Jesus Shootin’ Heroin”. I mean, we were just so ridiculous! I don’t think any of us had the confidence to think that we were interesting enough to sing about our own lives. Instead, we would make things up, never knowing what the hell we were singing about. I applaud any band that’s willing to make a fool of themselves and just go for it.

In terms of the album cover, the intention was a punk rock acid trip. We embrace that to a certain extent. A lot of the early punk rock stance would be against drugs, especially acid and the like. The people that we knew back then liked punk rock music and taking acid … we just simply didn’t have any rules. That was the essence of what we were embracing in sound and vision. We would run into more people like the Butthole Surfers and Meat Puppets who would be more like us, freaky, without hangups about what they should or shouldn’t be. 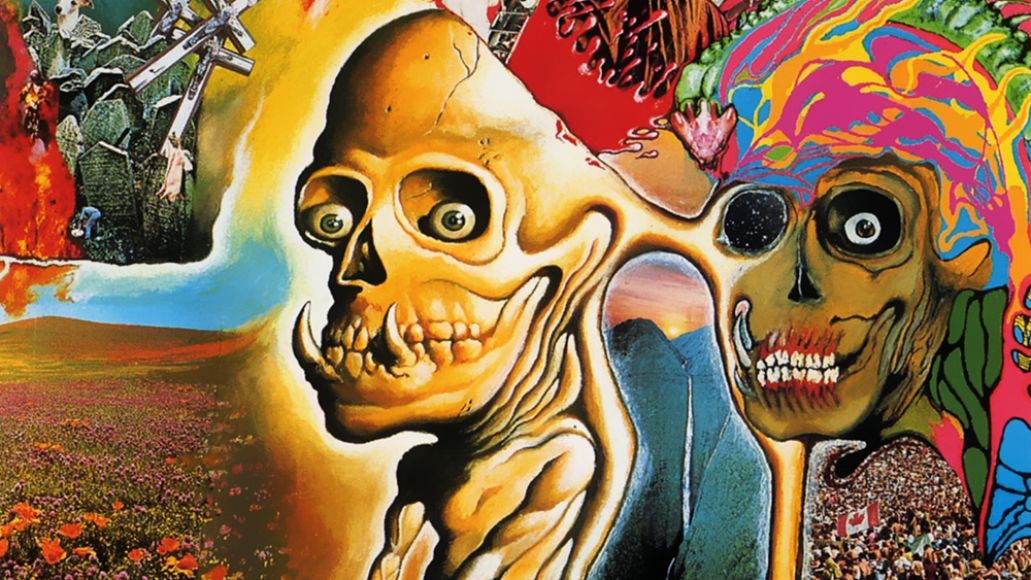 Though it carries the DNA of everything from Pink Floyd to The Replacements (and The Beatles, quite literally, using a couple of samples), the trio from the last album return and further embrace some more weirdness — evident immediately from the cover art. Their playful experimentation took classic rock roots and pushed their edges until everything was stretched into absurd new shapes. The balance of punk-indebted intensity and sweeter acoustic tones hints at the complexity to come.

[Laughs] At the time, this was one of the only records out there that had a Beatles sample on it. No one has ever called us out on it. At this point, we were literally just doing everything we wanted, and nobody cared. There wasn’t anybody to stop us, and that’s exactly how and why we put these records out. We were so under the radar that we didn’t need to care, and now that these records are out and have been for fucking 30 years that have these Beatles samples on them — it’s pretty ridiculous.

In terms of production, we were using piano and acoustic guitars, so I think a lot of people just didn’t know what the fuck we were trying to do. Most of the bands at the time were using loud guitars, but we didn’t have any idea what was cool and what wasn’t. The only way we made that record was not worrying at all about what music was being made outside The Flaming Lips. If we had to follow everyone’s lead, by the time we put it out, it just wouldn’t be current anymore. For Oh My Gawd!!!, we were just barreling ahead and starting to figure out more about how to make records. That’s the part of the process I remember the most, because it’s what we like to do. That started us on the path of really pursuing whatever it was that we had to do, just so that we can keep making more records. Whatever we had to do to keep making another record we did: playing shows, selling T-shirts, and that’s the way we still are today. While there are things in between that you have to do to prepare yourself so people want to buy your records, our main goal is that this album taught us that we like making records.

While the sound feels rooted in rock, you must remember I grew up in the late ‘70s for the most part. I mean, I was born in 1961, so I was meant to be a weirdo in a ‘70s rock group. Luckily, punk rock came along, and it was the loudest style out there and allowed us to be a group and make this record. We aren’t real musicians. We were nothing without punk rock giving us the kind of freedom to do anything without being so embarrassed about it. And then before you know it, we are making strange, arty records, pushing through what should have been a really awkward situation because we didn’t really know how to play and record music. We were just figuring it out as we went along, and I think we were just very lucky. During this time, we were starting to do more things that were studio-orientated and not so much about the way we were supposed to be playing in front of people.