Experience is an overused word and often used with less impact than a false vow of chastity at The Wall. However, The Game of Thrones Live Concert Experience has earned the rightful crown as one of the most compelling live experiences of 2017. By the old Gods and the new Gods beyond counting, this massive stage and screen production avalanches over audience members within a compelling blizzard of grandiosity, fake snow, and the popular HBO series’ best compositions.

For two and a half hours, composer and master of ceremonies Ramin Djawadi joins wandering soloists and sprawling bands across seven stages as they all pay tribute to each of the feuding Seven Kingdoms of Westeros. Choirs sing Valyrian hymns, violinists weep under sturdy Weirwood tree trunks, and cellists splash water while they honor the seafaring House Greyjoy. Surrounding them is a medley of screens that parade around the unfurled family sigils for each house and highlight the most pivotal and defining moments of the groundbreaking series, complete with pyro, smoke machines, and innovative effects.

“We just pushed and said let’s do something that’s never been done before,” Djawadi explains. “This immersive stage creates a special feeling the minute you walk into the arena.” 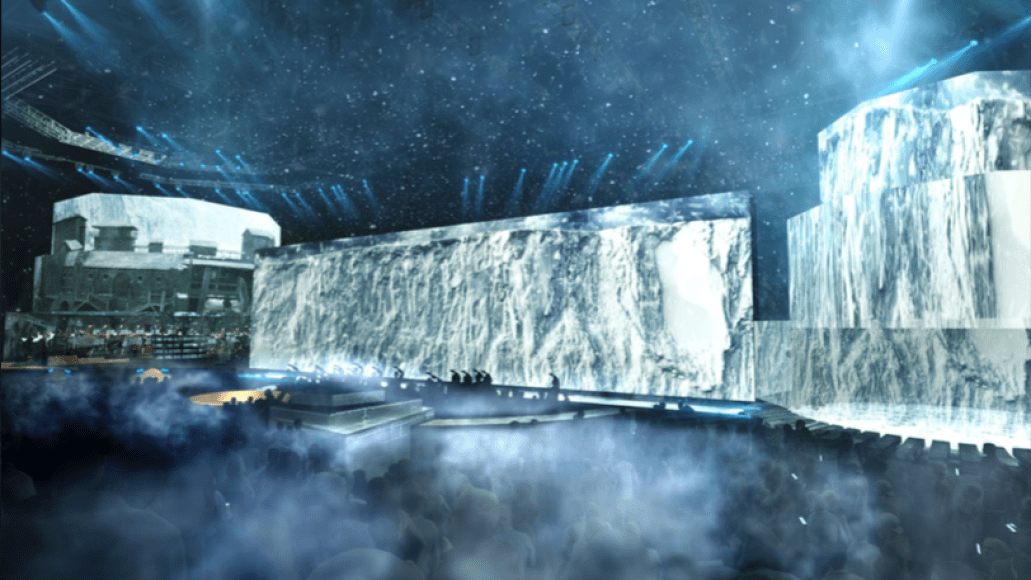 Djawadi knows what it means to be spellbound by sound and design. At the age of four, he played music by ear on the family piano in West Germany, obsessed over the subtleties of The Magnificent Seven while mastering his father’s Persian cassette tapes, and later attended Boston’s prestigious Berklee College of Music. It was in Boston where he first witnessed the late composer Michael Kamen (Lethal Weapon, Die Hard) perform a soundtrack live.

Eventually, after working with Hans Zimmer (The Lion King, The Dark Knight Trilogy), Djawadi landed his own gigs for blockbusters like Iron Man and Pacific Rim. But it’s his masterful, creative work on Game of Thrones — based on author George R.R. Martin’s magnificent book series A Song of Ice and Fire — that really brought the 42-year-old composer to the forefront of popular entertainment. It was just a matter of time and resources before he could follow Kamen’s footsteps long ago.

“I was with [showrunners David Benioff and D. B. Weiss] reviewing season three’s music, and they said, ‘You know what you should do, put on a concert.’ I thought cool, yea,” Djawadi explains. “And then nothing happened for weeks until the idea came up again, and it sort of stretched out over time until halfway through the three-year mark everybody decided, ‘Let’s really do this! And let’s do it on a big scale!’ We got HBO and Live Nation on board and then moved forward with conceptualizing the show and finally bringing it to life.” 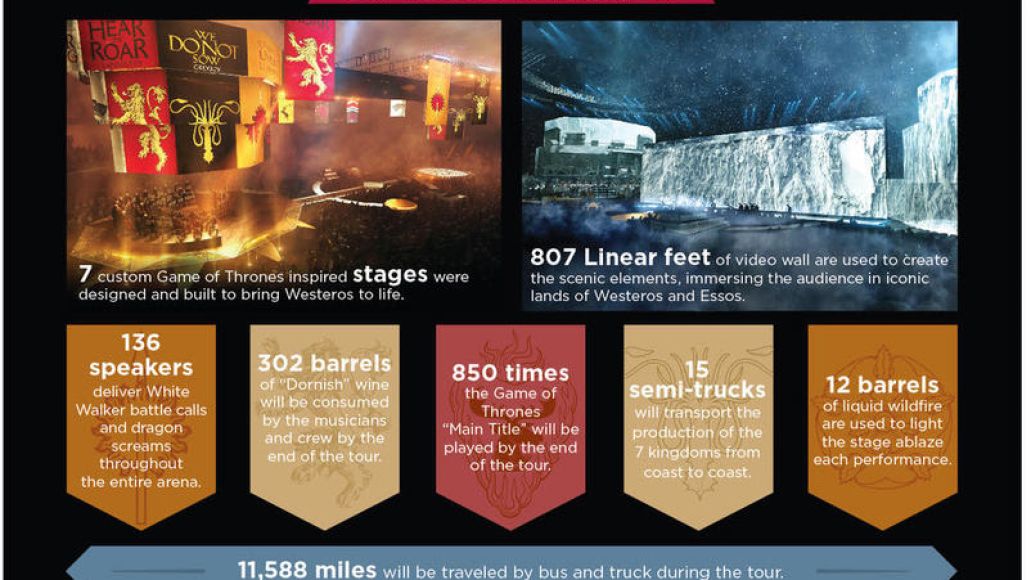 Through 225 pieces of lighting equipment and a dizzying 807 linear feet of shape-shifting video screens and “wedding cake” domes, the entire show engulfs the crowd, making the Game of Thrones Live Concert Experience the only recent contender to challenge Kanye West’s floating stage Saint Pablo Tour as the most elaborate production to hit the road in years, requiring 15 semi-trucks to move the stages alone during the tour’s nearly 12,000 miles of travel.

This colossal production enhances the foreboding ambience of songs like “The Rains of Castamere”, cascading fresh blood from the infamous Red Wedding across monitors as a lone singer warns against challenging House Lannister. Daenerys Targaryen’s gallant strides across the continent Essos enjoys a similar musical tension as screens contrast the fireproof Mother of Dragons against a compilation of those more prone to combustion. Even Arya Stark’s learned Braavosi mentors — Water Dancer Syrio Forel and Faceless Man Jaqen H’ghar — appear in a blended tribute over Djawadi’s exploration of the mysterious foreign land. This free-flowing dynamic allows for a jazzy re-contextualization of the TV series’ characters, in addition to its sounds and themes .

“We created instruments specifically for the tour,” gushes a delighted and focused Djawadi as he elaborates on bringing the epic setlist down to a reasonable stretch, “like the 12-foot Wilding horn, which looks really cool, something I didn’t have in the studio. The big challenge is to summarize six seasons in one evening. We had the show’s linear order figured out but also discovered how nicely you can jump around in time with different characters. With Theon’s theme, we jumped to season six and recapped what he had done in other seasons. That movement really summarizes the character without ever feeling out of place.” 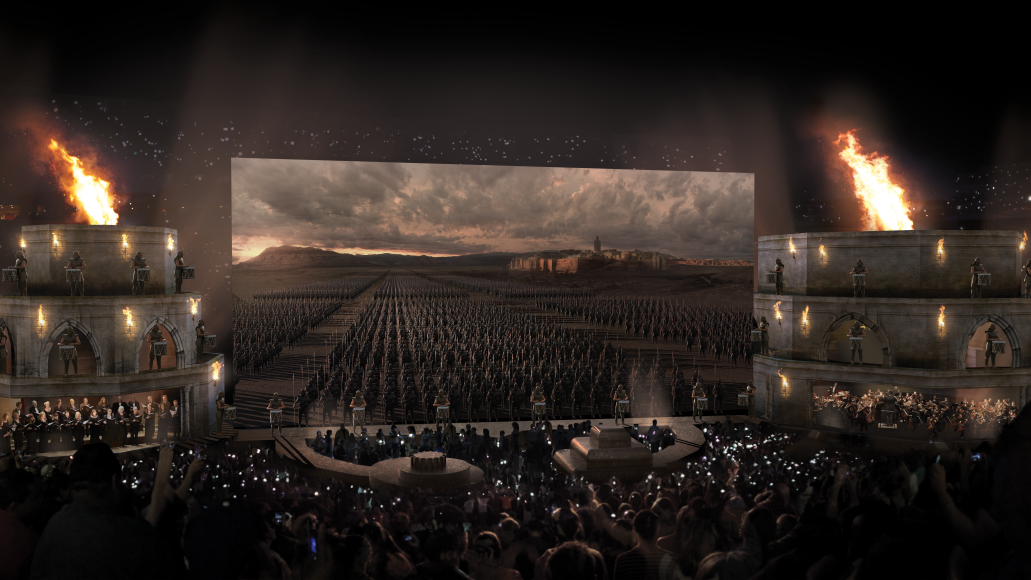 The night’s climax features Djawadi playing piano while being encircled in a curtain of wildfire effects as “The Light of the Seven” accompanies Queen Cersei’s season six consolidation of power. The song starts off gently, but races toward apprehensive heights as its tonality shifts and fires warning shots at all who stand in Cersei’s way. “The Light of the Seven” also stands out as the first time a piano was allowed onto the Game of Thrones soundtrack, but the grin on Djawadi’s face makes him look like a happy child just having fun noodling around on all of his favorite instruments.

When asked if there are any big plans for taking his other works on the road, Djawadi jokes, “People are already asking, ‘Hey, Ramin, what about a Westworld tour?’ When I look at that score, so many ideas come to mind: The player piano, all the acoustic guitars. I think I should also bring my synthesizer. The scores for Westworld and Game of Thrones are so different, but now that I’m taking Game of Thrones on the road, there’s a ton of ideas and I have to think it would be really cool to do a Westworld tour.”

Based on the initial success of The Game of Thrones Live Concert Experience, we think even Ned Stark’s ghost would give all of Djawadi’s grand ideas a vigorous nod of approval. But, you’ll have to experience it for yourself.

Behind the Scenes of The Game of Thrones Live Experience