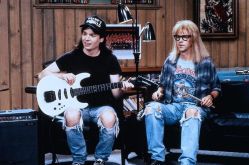 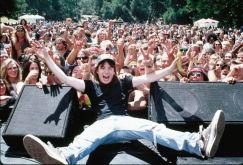 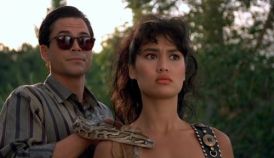 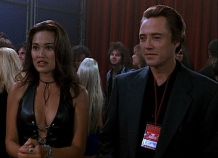 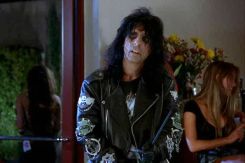 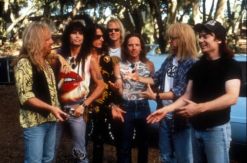 Extreme Close-Up: By all counts, this should be a walk in Adlai Stevenson Park for Aerosmith. When the sequel came out in 1993, the entire rock and roll world was still sucking on the teat of Grip, one of the biggest rock albums in history. Wayne’s World 2 starts backstage at a ‘smith concert and ends with the band emerging from The MirthLimo to play “Dude (Looks Like a Lady)” and “Shut Up and Dance” at Waynestock. They nailed the part of biggest band in the world perfectly, but that’s all they did; it more or less came across as Aerosmith product placement. Where was the playfulness of their Wayne’s World visit just a few years prior on SNL, when Wayne and Garth jammed with the Boston boys to their theme song and lobbed them softball interview questions about Steven Tyler’s lips and the fall of communism? Then you have Alice Cooper, an act that nobody my age knew in the early ’90s, capturing our teen imaginations in the original with his ironic mix of gore and riding crops with a Ward Cleaver demeanor and local-history lessons. Twenty-five years later, nobody other than Wayne’s World diehards points to Aerosmith’s role in the series while The Godfather of Shock Rock probably hasn’t played a show since without fan boys prostrating before him or asking if he comes to Milwaukee often. This is one of the few times that Aerosmith can stay home and lick the cat’s butt. –Matt Melis 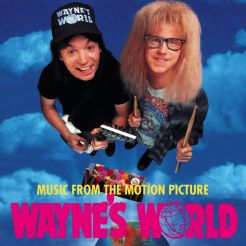 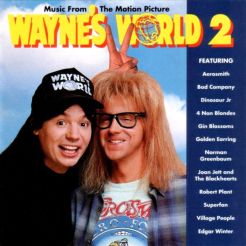 Extreme Close-Up: Wayne’s World and rock ‘n’ roll go together like hurl and lung butter, which is why both soundtracks test very high on the rock-ability scale. And since the series curiously toed the line between ’80s hard rock and ’90s alternative, they’re also a little all over the place stylistically, mixing up acts like Cinderella and Red Hot Chili Peppers or Dinosaur Jr. and Aerosmith. What separates the two is how the first film sounds very of its time — or, at the very least, like an echo of the late ’80s and early ’90s — whereas the sequel comes off like an ode to ’60s and ’70s rock. Sure, the original has its share of classics, specifically Queen’s “Bohemian Rhapsody”, Gary Wright’s “Dream Weaver”, and The Jimi Hendrix Experience’s “Foxy Lady”, but they’re wedged between weird stuff like BulletBoys’ “Rock Candy” or Rhino Bucket’s “Ride With Yourself”. Even veterans like Clapton, Sabbath, and Cooper offered up newer tracks for the album, and let’s not forget Tia “Baberham Lincoln” Carrere’s catchy rock ballad “Why You Wanna Break My Heart” and her sizzling cover of The Sweet’s “Ballroom Blitz”. Altogether, there’s something wholly iconic about this collection of songs, namely because they’re mostly signature to this film as opposed to the more ubiquitous FM hits of the sequel that have been used elsewhere (see: Norman Greenbaum’s “Spirit in the Sky”, Golden Earring’s “Radar Love”, The Edgar Winter Group’s “Frankenstein”, and Joan Jett’s “I Love Rock ‘n’ Roll”). Having said that, not a day passes where I don’t think about Aerosmith’s “Shut Up and Dance” and the promise they made on that one perfect day at Waynestock. –Michael Roffman