Next month, the Trump administration is expected to reveal its proposed federal budget for 2018. As many have feared, federally funded arts programs are on the chopping block.

According to the New York Times, the White House budget office has compiled a list of nine programs worthy of elimination. Among them: the National Endowment for the Arts, the National Endowment for the Humanities, and the Corporation for Public Broadcasting. A final budget — including a list of the eliminated programs — is expected around March 13th.

Funding for the national endowments currently makes up a minuscule portion — 0.003% (!) — of the nearly $4 trillion federal budget. In 2016, the NEA and NEH each received $148 million, money which provides crucial government grants for arts education and enrichment programs.

The Corporation for Public Broadcasting supports PBS, NPR, and other public TV and radio outlets. Its annual budget stands at less than $500 million.

If that sounds like peanuts, that’s because it is. It’s all the more striking when visualized in pie chart form, as The Washington Post has done: 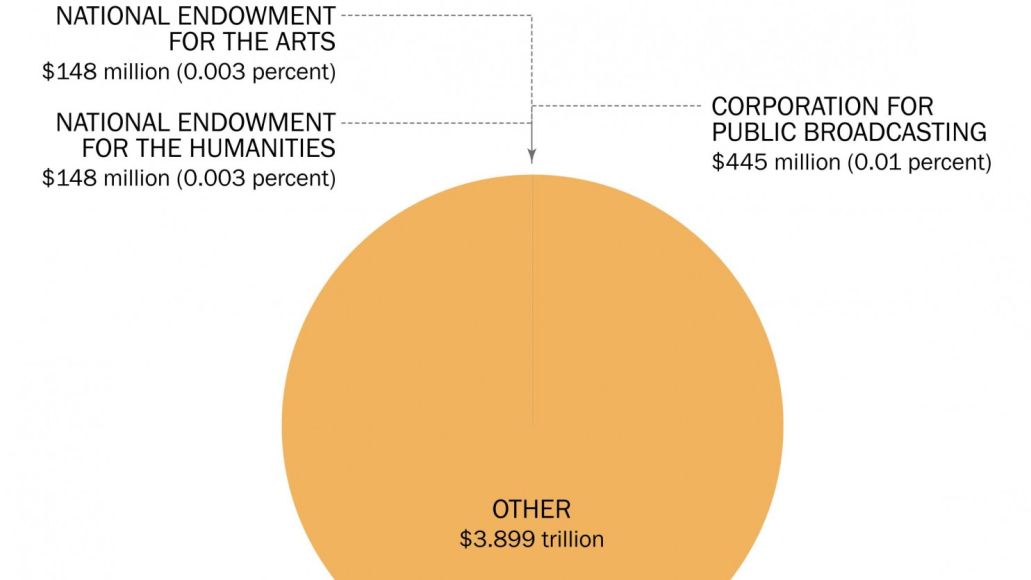 Nevertheless, conservatives have long targeted these programs, and under a Trump presidency, they may finally get their wish. Stephen Moore, a Heritage Foundation economist who serves as an advisor to President Trump, told the Times, “I think it’s an important endeavor to try to get rid of things that are unnecessary. The American public has a lot of contempt for how government is run in Washington, in no small part because there is so much waste.” For what it’s worth, in his first month in office, Trump wasted $11.3 million of tax payers’ money playing golf in Florida on three consecutive weekends.

When it first came apparent that Trump was eyeing an elimination of the NEA, NEH, and CPB, we launched a petition through the White House’s We the People portal. Despite accruing over 100,000 signatures, the White House has yet to formally respond to the petition. Repeated emails to the White House press office have also gone unanswered.

Donald Trump moving forward with plans to kill National Endowment for the Arts, PBS and NPR