Roughly halfway through Get Out, comedian and horror aficionado Jordan Peele’s directorial debut, our hero, Chris (Daniel Kaluuya), approaches the only other black man he sees at an otherwise caucasian garden party. He tells this man, Logan (Lakeith Stanfield), that he feels more comfortable seeing another black guy there. But Logan doesn’t seem to register this. His speech is blankly polite, his movements stiff, his outfit oddly uncanny; he gazes upon Chris the same way everyone else at the party does: as an Other.

Now, Chris knows he’s the Other. In situations such as these, he’s bound to be. He tells his girlfriend, Rose (Allison Williams), as much as they drive to meet her white, affluent parents in their white, affluent suburb. He laughs when she tells him they’re not even the least bit racist, that her father “would’ve voted Obama for a third term if he could.” Later, she’s mortified by her family’s performative liberalism, which cracks as her father slips into urban slang and her brother compliments Chris’ “genetics.” Chris isn’t offended, just amused. He’s used to it. So, when he sees another black person, whether it’s Logan or a member of the household’s staff — groundskeeper Walter (Marcus Henderson) or maid Georgina (Betty Gabriel) — he understandably desires a reprieve, however brief, from feeling like a curiosity.

Instead, they just make it worse. Because something is wrong here.

Peele’s movie is wonderful, both as a horror movie and as a piece of social satire. It’s scary, funny, and emotional, emboldened by strong, soulful performances and a central voice that’s distinguished by both Peele’s personality and what’s clearly a deep passion for the genre. He’s expressed that passion in multiple interviews — perhaps most notably in a 2016 episode of Blumhouse.com’s Shock Waves podcast — and shares a long list of influences with me over the phone.

He mentions Night of the Living Dead, Halloween, Misery, Silence of the Lambs, and The Stepford Wives, the latter of which resounds most clearly. He also mentions Candyman and People Under the Stairs, two horror films that prominently feature black characters and cultural touchstones, but were nevertheless directed by white filmmakers. When I ask him about horror films from black filmmakers, such as 1995’s Tales from the Hood and ‘70s blaxploitation classics like Blacula, he’s less enthusiastic.

“When we talk about blaxploitation or Tales from the Hood or Leprechaun in the Hood, I think those fall into parody town for me,” he says. “They don’t scratch my horror itch as well as something like Candyman does or People Under the Stairs, which were ironically brought to us by white filmmakers.

“Being a black filmmaker almost seems like an impossibility at times,” he continues. “Obviously, there are exceptions to the rule, but we as a society have done a systemic disservice to young, black filmmakers by essentially saying that your vision won’t be accepted in Hollywood.”

The trend in Hollywood, it seems, is that black filmmakers should aim to make a particular kind of movie, one rooted in history and struggle, and that genre isn’t a worthy pursuit. Even Spike Lee, the legendary filmmaker behind Do the Right Thing and Malcolm X, had to fund his modern-day remake of ‘70s art-horror cult classic Ganja & Hess, Da Sweet Blood of Jesus, via Kickstarter.

Peele’s sentiments echo the story of another black horror filmmaker, Ernest Dickerson. Dickerson, who directed 1995’s Tales From the Crypt Presents: Demon Knight and 2001’s Bones in addition to episodes of AMC’s The Walking Dead, discussed the difficulty people of color face in developing modern genre films in Hollywood with The Dissolve in 2015. The article reads, “When it comes to getting films about black people made, he finds, filmmakers are better off embracing the past.”

It’s on that latter point that they differ, especially when it comes to Dickerson’s advice for black filmmakers interested in horror. “Since there haven’t been many horror films made by black directors since Ganja & Hess and blaxploitation,” Dickerson told The Dissolve, “you need to go back to that era for inspiration.”

Although Peele wears his influences on his sleeve, they’re more rooted in the formative horror of the ‘70s, ‘80s, and ‘90s than in the fringe approach of blaxploitation. Peele says Get Out was inspired by movies that “show us the dark side of what’s seemingly perfect,” specifically mentioning the “idyllic, serene worlds” of The Stepford Wives, Halloween, and The Shining, as well as Misery’s ability to “find its villain in a very likable, relatable woman.”

Peele’s hero is, in many ways, a traditional one: level-headed, but needled by a simmering evil that no one else seems to acknowledge. He’s a good person, easy to root for, but at odds with a threat that’s seemingly unstoppable. Literally the one thing that separates him from horror protagonists of yore is his race, and that factor is essential to both the movie and genre as a whole. 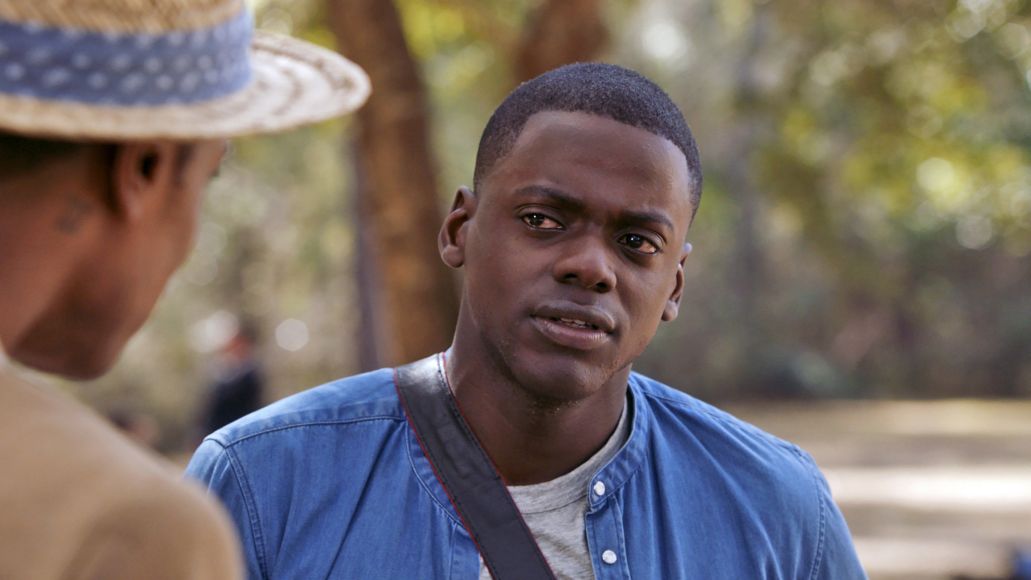 “[Get Out] deals with a protagonist that I don’t see in horror movies,” Peele told Playboy in 2014. “It’s one of the very, very few horror movies that does jump off of racial fears. That, to me, is a world that hasn’t been explored. Specifically, the fears of being a black man today. The fears of being any person who feels like they’re a stranger in any environment that is foreign to them.”

It seems odd that a black everyman resonates as a quietly revolutionary act in horror, but that’s nevertheless true, and perhaps a reason that Peele doesn’t find himself connecting personally with the genre’s history of horror by black filmmakers. In Harry M. Benshoff’s 2000 essay, “Blaxploitation Horror Films: Generic Reappropriation or Reinscription?”, the author discusses how blaxploitation horror sought to subvert and forge a singular identity in horror by “embracing the racialized monster and turning him into an agent of black pride and power.”

In doing so, the filmmakers hoped to create sympathetic monsters that would “shift audience identification away from the status quo ‘normality’ of bourgeois white society.” Benshoff notes that the problem, according to several black critics of the time, was interwoven into its DNA: No matter how likable black characters were as monsters, they were still monsters. In these movies, black culture still signified horror. And it didn’t help that many of the monsters embodied stereotypes enforced by white audiences, with black monsters expressing an “animalistic” mode of rage and a violent carnal appetite that often led to sexual assault. 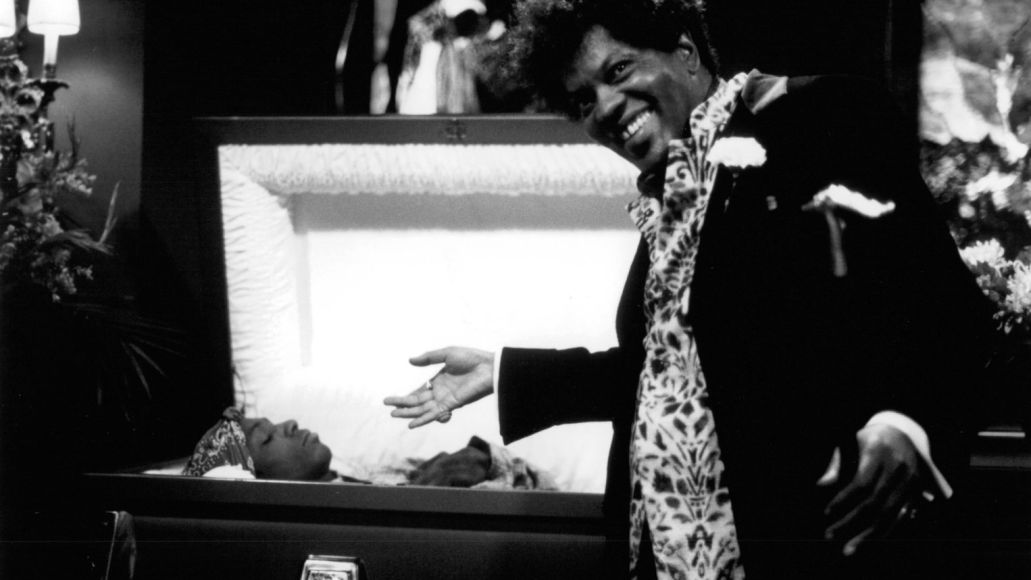 Looking at the “urban horror” entries from the ‘90s and early 2000s, it’s easy to see the influences they carried over from blaxploitation, but also the ways in which they were changed by the decade’s racial unrest — the 1992 Los Angeles riots, the Rodney King beating, and the fury surrounding the O.J. Simpson murder case. Rusty Cundieff’s Tales from the Hood, for example, deals directly with issues that remain eerily resonate today, including racially motivated police brutality and openly racist politicians. Still, as with their ancestors in the genre, the film’s black cast more often than not comes to signify horror, though a modern kind in gang members, drug dealers, and prison inmates — more stereotypes that Cundieff works to both humanize and, in several instances, punish for their sins.

Benshoff’s essay also touches on this mode of character, wherein people of color manifest in symbolic figurations. In his thinking, the status of character as an exploration of identity contributes to the ongoing construction of racial meaning and identity within specific historical and social contexts.

The problem here, and perhaps the reason Peele classifies these films as parody — beyond the fact that many, like Exorcist ripoff Abby, were parody — is that the characters rarely resonate as, well, people. Rather, they feel like vessels for a grander examination, with characters that engage directly with stereotypes as a means of dissection and subversion. Through horror, they were facing their own demons in a pursuit of identity.

There’s value in that, obviously. Blaxploitation horror films like Blacula and J.D.’s Revenge have persevered for their resonance in these areas, as have movies like Candyman, which, despite having been written and directed by white artists, powerfully explores how racism and historic oppression can create monsters in areas where that oppression still exists.

What separates Get Out from the lineage of black horror before it is that it’s not about race so much as it is about racism. Peele’s not framing the black experience in the grander history of America. Instead, he’s exploring what scares him right now, in a modern age where ideas of white supremacy are manifesting in newer, more linguistically creative ways. Here, among the left-leaning communities Peele is exploring, racism tends to manifest through cluelessness, only to be exposed in further, more unsettling ways as the layers are continually peeled back. It’s an approach that’s decidedly modern and, in both aesthetic and ideological terms, different from the blunt, aggressive modes of blaxploitation.

Where Peele’s aim aligns with blaxploitation is in how he wants to, in Benshoff’s words, “expose white ‘normality’ and especially white patriarchy”; what he doesn’t want to do, however, is create characters that represent ideas more than they do flesh and blood. If there’s another thing that connects the many movies Peele listed as influences, after all, it’s that they’re all memorable as much for their characters, for their realistic, recognizable milieus, as they are the scares. 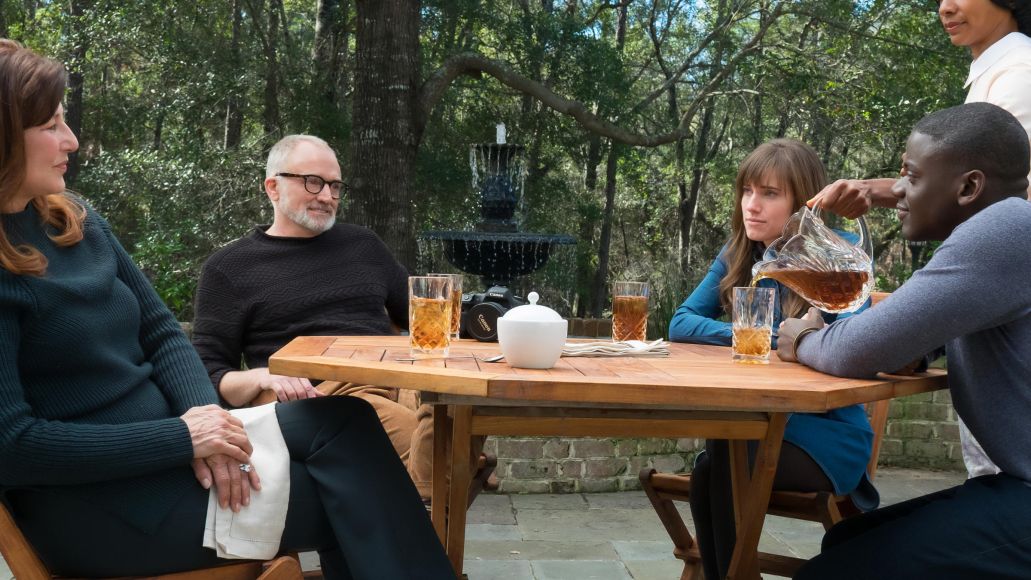 But what’s most exciting about Get Out is how, by virtue of emphasizing a black hero in a story of racial consequence, as opposed to a black monster or villain, the film is able to investigate ideas of Otherness as they exist in horror. And, in this way, Get Out is accomplishing much of what the black horror films that came before it set out to do, just in a way that’s less interested in history than it is our modern day milieu.

And Peele’s far from finished. He’s got four “s-cial thrillers” he wants to develop over the next 10 years. “I think horror is the best way, my favorite way,” he says, “for us to face our own demons and to address our own fears and the real horrors of the world. All the unpleasantness that we need help facing.”

And, let’s be honest, there’s lots of unpleasantness out there. Movies like Get Out, however, make it a little bit less so.

Horror and Race: How Jordan Peele's Get Out Flips the Script