It’s Always Sunny in Philadelphia’s resident badass lacks a certain consistency, as if deep within his “mass” is a maelstrom of conflicting emotions. What that conflict is exactly has been slowly, painstakingly made clear over the series’ past 11 seasons, culminating in season nine’s “Mac Day”: “I don’t think we’ve ever said this as a group,” Dennis says, “but Mac’s gay.” Dee, Charlie, and Frank agree, but Mac doesn’t. Is he in the closet, or is this all just a big understanding?

Well, this particular wrinkle in Mac’s character turned yet another corner in tonight’s episode, “Hero or Hate Crime?” As a means of evaluation, let’s take a second to dig deep into the moments, hints, and asides that have always complicated Mac’s tenuous sexuality.

The Curious Case of Carmen 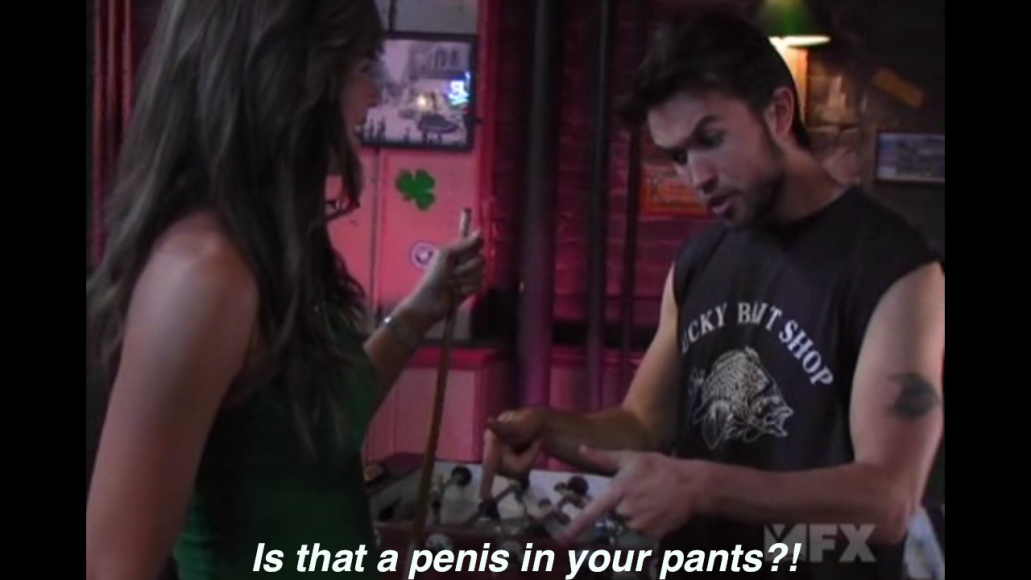 The Object of Affection: Carmen, a gorgeous transexual who we encounter in both her pre- and post-op phases of transition.

The Evidence: At first, Mac has no clue Carmen is trans, though it isn’t long before he notices the giant mushroom tip bulging inside her tight jeans. He’s initially put off, but a few comments about his physique is all it takes for him to set aside the pesky “penis” issue. Soon, the two are making out and, come season three, even “banging,” though the logistics of their intimacy is only briefly touched upon (“She tapes it back,” Mac explains at one point). Come season six, however, Carmen is post-op but married to a man Mac claims is “clearly a homosexual” (he’s not). He spends the episode arguing against their “gay marriage,” though it’s clearly a pursuit based on jealousy.

Excuse Me? “Now that you’re dickless, I’m into it.”

What’s in the Closet? Carmen was, in many ways, Mac’s gateway into homosexuality. Stunned by her beauty (and taken by her flattery), he’s able to overlook her penis until, well, he can’t anymore (he tends to “bump up against it” during smooching sessions). Still, they keep hooking up, with Mac claiming that he’s laying the groundwork for when she lops off the member. But it’s pretty clear that Mac’s protests are a result of his antiquated machismo rather than emblematic of his sexual desires. Something about that dong kept him coming back. 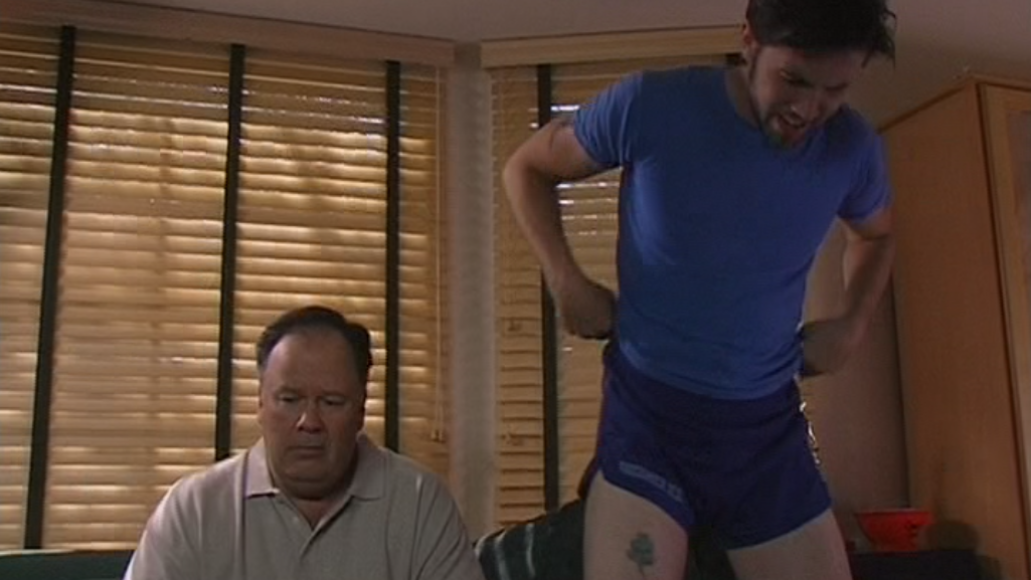 The Evidence: After their childhood gym teacher is accused of molesting some of their fellow classmates, the gang interprets Charlie’s weird behavior as evidence that he was molested. This sends Mac into an apoplectic rage, not out of concern for his friend but because the gym teacher apparently didn’t find him attractive enough to also molest. Mac takes it a step further by popping by Murray’s house a tight t-shirt and ultra-short shorts, then offering a blatant “inner thigh rub” and come-hither gaze (that is promptly rejected).

Excuse Me? “I was cute, I was energetic, I was fun! What exactly was this prick looking for? If the McPoyles got blown and Charlie got blown, why didn’t I get blown?

What’s in the Closet? Mac’s vanity knows no bounds, and his early instances of homosexuality seem rooted in a desire to be admired more than anything. Mac becomes so obsessed with the idea that Charlie was molested over him that he begins studying trends in pedophelia and is overjoyed to discover the issue is centered more with power than attractiveness. What’s interesting is in how the less Mac worries about his vanity, the less interested he seems in women. 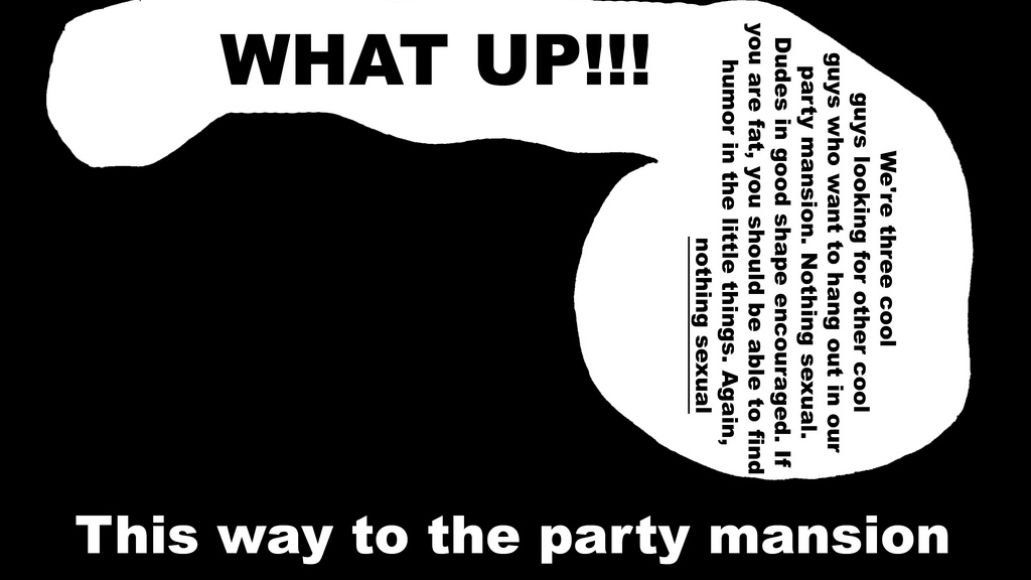 The Evidence: For years, Mac’s homosexuality has crept through the cracks, resulting in a litany of, well, curious (and seemingly unconscious) choices. There’s season three’s party invitation, for one, which repeatedly drops phrases like “party mansion,” “nothing sexual,” and “fitness encouraged,” not to mention is shaped like a bulging bicep (that looks unambiguously like a huge, veiny penis). Later, when trying to discern the identity of the father to Dee’s baby, he’s impressed to learn she bedded hunky male model Rex (“Rex is a quality lay,” he says offhandedly). There’s also the dollar bill he slips (slowly and with force) into a waiter’s back pocket in season eight. A few episodes previous, however, his repressed sexuality emerged in the most Freudian of ways (see the below quote).

Excuse Me? “Oh. I get it. Cute. You leave this pen here and people are supposed to think, ‘Oh, that looks like a dick.’”

What’s in the Closet? Mac is obsessed with penises. And it’s quite possible that obsession wasn’t even homosexual in nature at first. His relationship with Carmen haunted him; a night probably didn’t pass without him remembering how her bulge felt pressing against his leg. Eventually, it seems, he began missing that bulge. 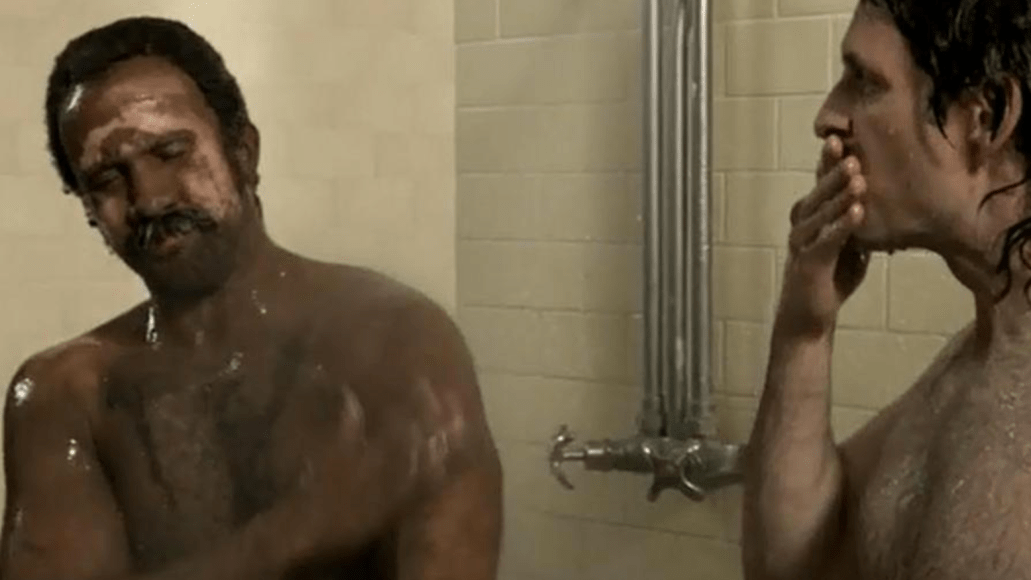 The Evidence: Hey, if you’re attracted to men, you’re probably attracted to Dennis, whose “nose was chiseled by the gods themselves,” whose “body was sculpted to the proportions of Michelangelo’s David.” Dennis first gets the vibe in season four, responding with a confident “oh yeah” after Charlie asks if he thinks Mac wants to bang them. He’s watched enough of Dennis’ sex tapes to know he has “weird balls” and, as we learn in “The Gang Gets Quarantined,” that his best friend can “go from flaccid to erect in a moment’s notice” (“I’ve seen it!” Mac says, nodding in approval at Dennis’ song.

Mac looks at Dennis’ crotch a lot, actually; watch close and you’ll see him doing it at the strip club during “Lethal Weapon 6,” a movie in which Mac scripts a scene where he and Dennis wrestle in the shower alongside the bare asses of two other hunks. There’s also the blatant kisses he moves in for in both “The Gang Recycles Their Trash” and “Flowers for Charlie” (Dennis politely ignores both), the simulated blowjob he gives as he and Dennis dance their asses off, and the subtle hint that, in the gay fantasy Mac nurses in “The Gang Goes to Hell,” he and Dennis share a house together.

What’s in the Closet? It’s inevitable in overly dependent relationships for one party to slowly fall for the other. That very much seems to be the case between Mac and Dennis, the latter of whom is far too willing to share his sexual exploits (via VHS tape, no less). Throughout the series, we learn that Mac has not only seen Dennis naked, watched him grow erections, and witnessed him plowing (on multiple occasions); that’s not the sort of thing one does unwillingly. Still, Mac’s love for Dennis isn’t an obsessive one; there’s nothing tragic here. Rather, it appears Mac simply lusts for his best friends, as the numerous moves he makes tend to arise during spontaneous moments of celebration of mood-setting.

The March Towards Acceptance 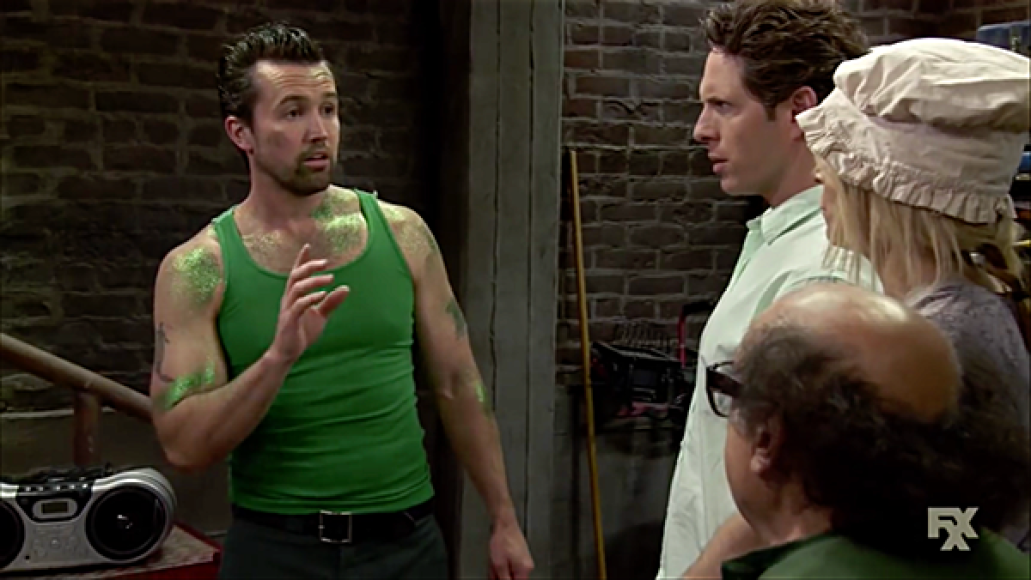 The Object of Affection: That evergreen dong, now taking on shape and dimension as it emerges from the subconscious.

The Evidence: As the series rolled on, Mac still refused to admit he was gay, but he certainly seemed to be fighting it less. When Dennis mentions how Mac tells himself he’s “tough and straight,” Mac’s reply is a perplexing, “I am tough!” Similarly, he doesn’t even argue with Charlie when, in “Frank Falls Out the Window,” he reminds Mac that the last time they frequented a strip club Mac was still into women. Perhaps the most shocking moment of season 11 came in “Charlie Catches a Leprechaun,” wherein Mac returns from a gay bar (The Rainbow, where he looked for a “pot of gold”) covered in glitter and in need of a towel. Make of that what you will.

Excuse Me? “[The Waitress is] not beautiful. And everybody’s banged her. Except for me. She was like, ‘I wanna do hand stuff with you and I was like, ugh, gross.’”

What’s in the Closet? Not much anymore. What life is like as a gay man is becoming more and more pronounced in his mind … and more and more desirable. Thus, the inflaming of… 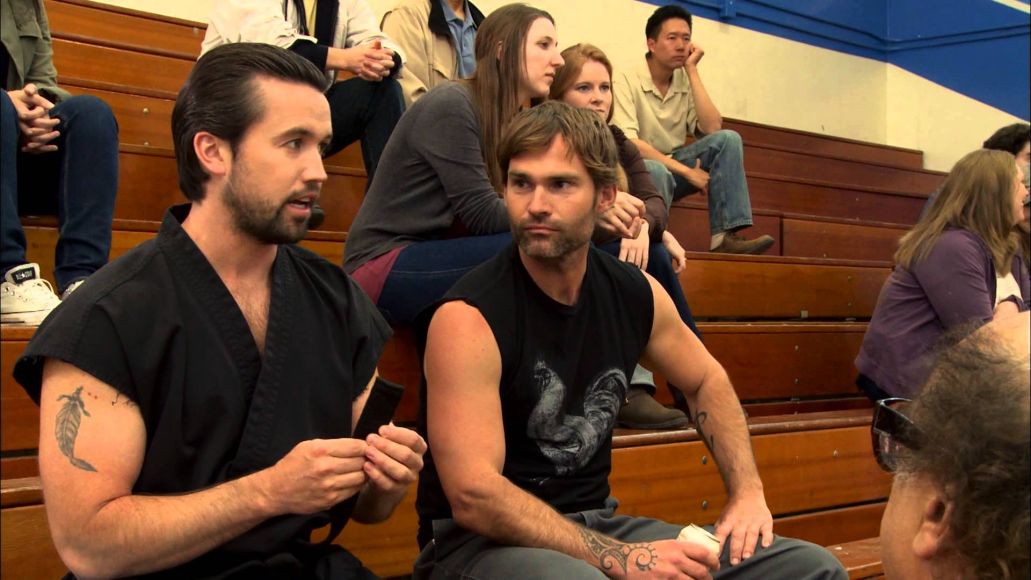 The Object of Affection: God, who he envisions as a vicious, glowering rebuke to his impure thoughts.

The Evidence: Mac seemed to have just rediscovered his faith when he condemns Carmen’s marriage in season six, but his inability to prove the sinfulness of their love didn’t deter his pursuit of God. References to it repeatedly pop up throughout the series, but boil over in “Mac Day,” where he preaches to the gang on the evils of homosexuality (while rocking a stiff boner, natch). And that boner doesn’t deflate when he tasks the gang with “greasing and tanning” up bodybuilders, whom, in his mind, represent the perfect “image of God.” Later, when he meets two gay Christians on a cruise ship, he attempts to convert them back to hetereosexuality before almost immediately succumbing to his true desires.

Excuse Me? “Where do you think AIDS came from? Uh, hello, God’s gift to the gays.”

What’s in the Closet? Mac’s faith seems to flare up as soon as the possibility of him being gay becomes a genuine possibility. So concerned with his masculinity, Mac needs a sturdy, time-tested reason as to why he can’t possibly romance a man. That gives way to his violent, fundamentalist faith (he literally carries a cat-o-nine-tails), which only seems to surface when he questions his sexuality (or loses a shuffleboard game).

As is the case with a sad amount of closeted Christians, his religion exists only as a means of punishment for what he’s convinced himself is bad behavior. Even after he embraces being gay in “The Gang Goes to Hell,” he can only do so by saying there is no God because if there was “he would never make me queer.” To rediscover his faith, as he does in the next episode, is to negate that gayness. This ties into what is perhaps the cornerstone of Mac’s particular point of view: the binary nature of existence. 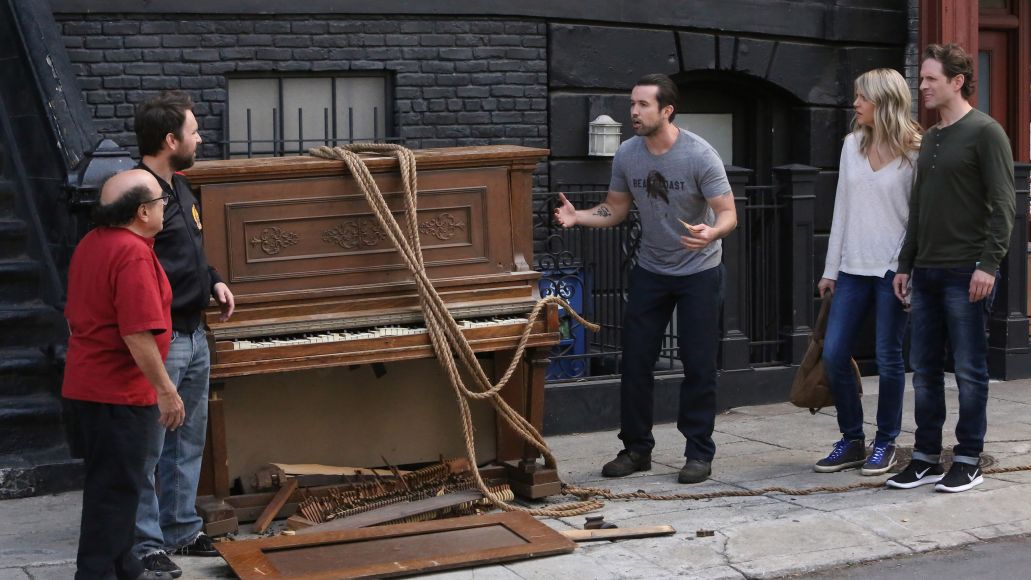 The Object of Affection: Let’s be sappy and say it’s Mac’s simply learning to love himself.

The Evidence: Mac is saved from a falling piano by Frank screaming, “Watch out, faggot!” Though it’s ostensibly about who gets to keep the lottery ticket Mac was in the process of picking up, the larger question surrounds whether or not Frank’s comment was a hate crime — if Mac is gay, it was. And if it was, then Mac gets to keep the lottery ticket.

At first, you think that’s the only reason Mac decides to come out; we’ve seen him pull schemes like this before, after all. But once all is said and done, Mac decides he’s good with it: “I dunno, maybe I’ll stay out. I think I’m out now. Yeah, I’m gay. Actually feels pretty good.” The gentle pianos and McElhenney’s earnest performance signal this as a permanent change, a genuine turn for the character.

Of course, that definitive proof wasn’t the only evidence in this episode. I’d be remiss to not mention the “Ass Pounder 4000,” a workout bike equipped with a dildo-fist in the seat. Though Mac initially claims it’s just there to keep you motivated, Charlie is quick to point out Mac’s workout shorts with the slit in the ass. Nobody’s buying it’s just “for airflow,” Mac.

What’s in the Closet? Nothing anymore. Mac seems out and proud. What’s especially fun about the reveal is how, well, relatively simple it is. Mac didn’t need an elaborate coming out story for this episode because that’s sorta what the whole series was. Also, of course the whole thing hinged on a selfish act. No matter how sweet, woke, or sentimental it gets, Sunny is always gonna Sunny.

Mac's Long Walk Out of the Closet on It's Always Sunny