“I believe in two things: one, ghosts; two, that there’s someone out there for everyone.”

In the early ’90s, lantern-jawed songbird Michael Bolton was the king of slow jams, belting out one warmed-over pop ballad after another (“When A Man Loves a Woman”, “How Am I Supposed to Live Without You”) scientifically engineered to get your parents in the mood for lovemaking. After those heady days of the early ‘90s, Bolton practically disappeared for two decades, until top-tier pop parodists The Lonely Island (Andy Samberg, Jorma Taccone, Akiva Schaffer) resurrected him in 2011 with “Jack Sparrow”, a gut-bustingly earnest ballad featuring an alternate version of Bolton as a confident yet sensitive sexual dynamo. This week, Michael Bolton’s Big, Sexy Valentine’s Day Special drops on Netflix and continues the pop singer’s pivot from cheesy relic to adorable meme, prompting us to wonder how we got here – speaking with sincere reverence about Michael Bolton in 2017.

The special, a co-production between Schaffer and Comedy Bang! Bang! mastermind Scott Aukerman, sees Bolton — still the same over-the-top figure from “Jack Sparrow” — tasked by Santa Claus to make the “sexiest Valentine’s Day special ever” in order to ensure 75,000 new babies are conceived by Christmastime. If you’ve watched any episode of Comedy Bang! Bang!, the special’s tone and rhythms will feel familiar; it’s practically a long-form CBB episode without its hosts, tasking Bolton with the Aukerman role. The gags are hit-or-miss at times, but the winners should be cherished, like Bolton’s trip through a disappointingly realistic VR sex simulation with Chris Parnell or the many cameos on the telethon phone bank to report when callers have conceived (says Bob Saget, “You’re having trouble conceiving…oh, you’re having trouble conceiving the concept of this special”). 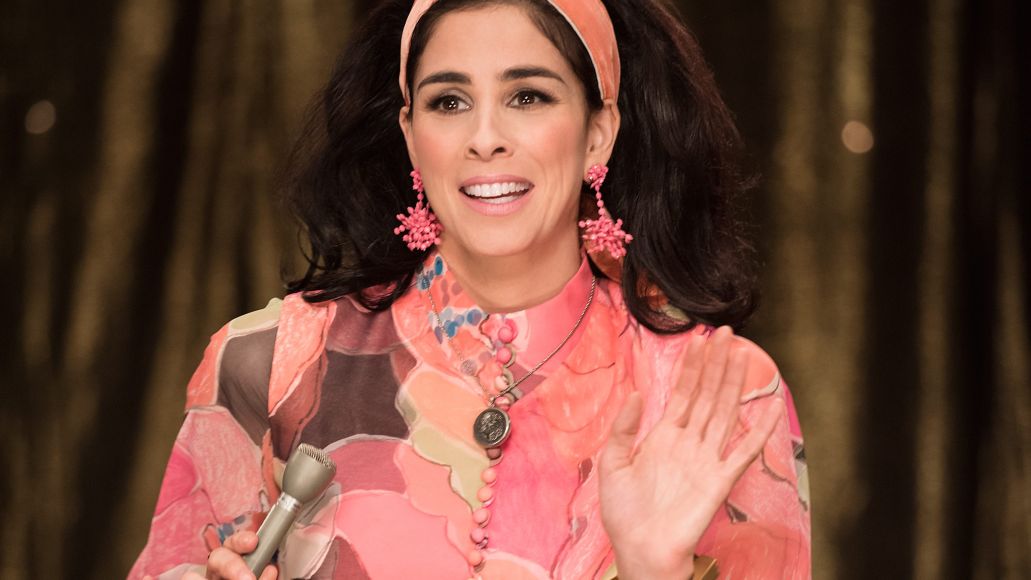 At the center of it all is Bolton, gamely belting his way through his Sisyphean task, all while pining for the love of his life, who breaks up with him over text message (“I have a new man in my life, and he’s inside of me right now?”). Much like Netflix’s previous celeb-hosted holiday special A Very Murray Christmas, Bolton quickly sees his special run away from him, with out-of-control guests and misdirected pre-taped segments. One pre-taped trip to a romantic chocolate shop (featuring a sheepish, frugal manager played by Fred Armisen) doesn’t feature him at all, prompting him to ask off-screen, “Why’d I even go to Solvang? They didn’t cut to me once.”

What’s most impressive about Bolton’s embrace of his memetic status is how effortlessly he pulls off the transition. His redemptive efforts to date haven’t asked much of him but to gamely croon whatever lyrics The Lonely Island or Screen Junkies put in front of him. This special, in many ways, is a litmus test to see if he can commit to the meme for longer than a YouTube video. As a comic actor, he’s almost always the weak link in the room compared to the likes of Samberg and Parnell, but Bolton’s own stiffness somehow becomes charming in context. He comes off as someone with a good sense of basic comic delivery who’s still learning the ropes, and has somehow stumbled upon the best possible teachers. Whether he’s trying to keep up with a demanding dance choreographer (Michael Sheen) who keeps complicating his “Old Kind of Rock ‘N Roll” musical number, or growing gradually more disgusted with Sarah Silverman and Randall Park’s lewdly-written couples song, Bolton pulls off his straight-man act with aplomb. 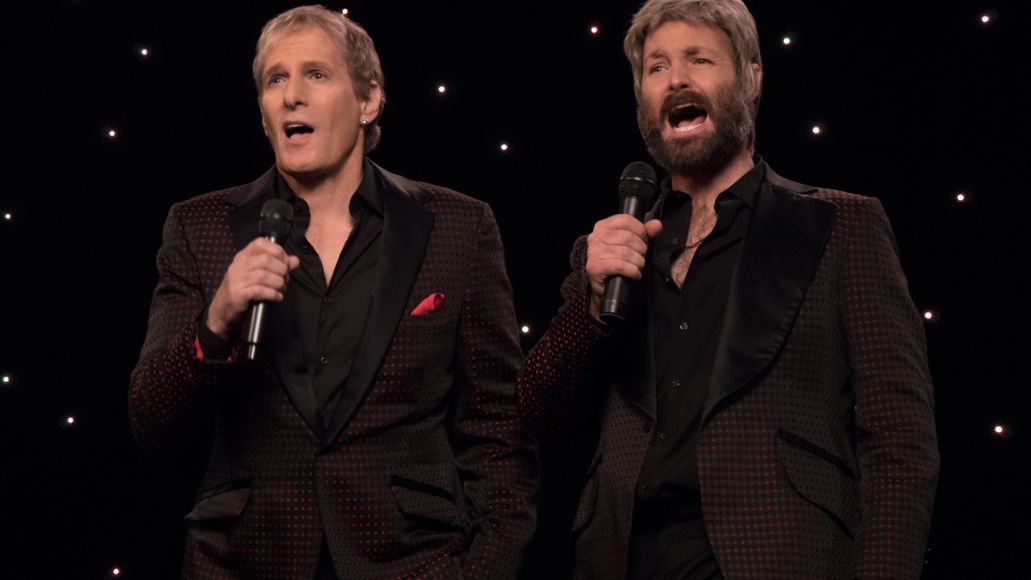 As a performer, Bolton’s voice is his greatest weapon: his soaring, smoky tenor has always been over-the-top, but that kind of vocal bluster works perfectly for his persona’s new blend of hokey cool. One of Bolton’s most admirable comic instincts is his ability to punctuate a moment or finish a sentence with his cheesy, arpeggio-fueled wail — imagine Jean-Ralphio from Parks and Rec if he sang like a bald eagle cried. The special makes perfect use of his majestic pipes, including one gag in which Bolton brings out his less-talented brother, Michael Fulton (Will Forte) to screech out a duet of “Stand By Me” right next to him. Whether he’s belting out a solemn piano cover of “Jack Sparrow” or participating in a voice-to-sax rendition of “Dueling Banjos” with Kenny G (played by Samberg), Bolton knows exactly how to ply his craft.

Bolton’s resurgence from long-haired, dad-pop sensation to ironic sexual superhero is a pluperfect example of the more admirable elements of our 21st century meme culture. This isn’t the first time this has happened to cheesy white guys we knew in the ’80s — hell, Neil Patrick Harris’ hyperbolic persona in Harold & Kumar is practically a one-to-one template for Bolton’s career pivot, both relying on the inherent humor of elevating obscure talents from your target audience’s childhood to Godlike beings of pure light and song. Without this approach, Seth MacFarlane wouldn’t have thrown a Sam Jones cameo in Ted just so Marky Mark could ride with him on an old Flash Gordon hoverbike. Even Bolton’s special is fully cognizant of the man’s cultural shelf life: In the climax, Bolton must reach deep inside and achieve “Peak 90’s Bolton,” with flowing hair and denim shirt, to sing his classic “When A Man Loves a Woman” and save Christmas. But as the special forces Bolton to don his signature long blond locks, a look he’s been running from for decades, he transcends it by winking openly at it. He’s a man who understands his niche role in pop culture, and is willing to ride it all the way to the end. 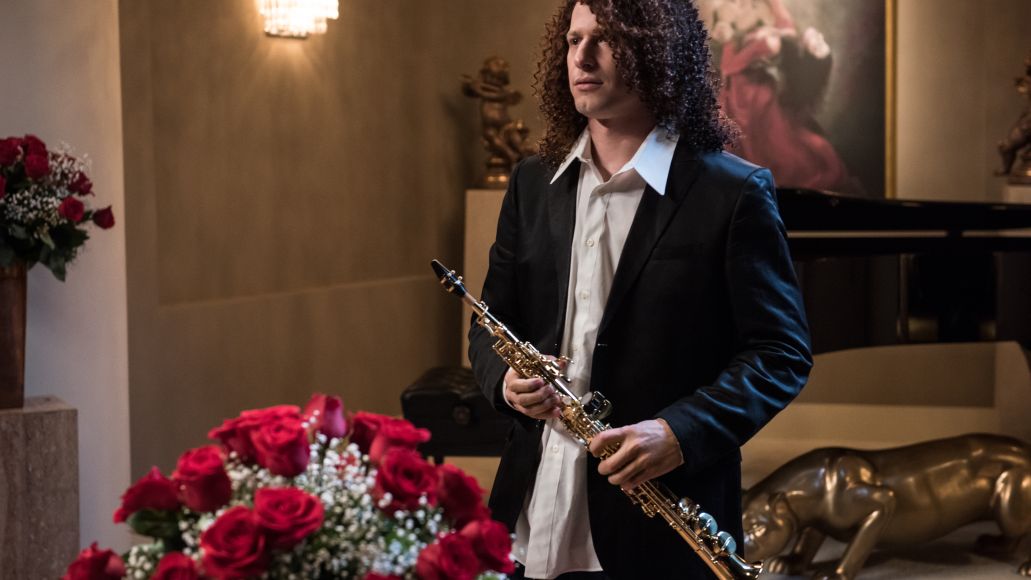 Who’d have thought that, in 2017 of all years, Bolton would experience a career resurgence thanks to his fans growing up, becoming comedy superstars, and slathering a few layers of irony on him? Thankfully, Michael Bolton’s Big, Sexy Valentine’s Day Special is proof positive that this kind of tongue-in-cheek homage is sometimes worth it. Today’s titans of pop culture seem to do well by the inspirations of their youth; Samberg and co. are no exception, and Bolton’s trust in their instincts is well-earned, the man seemingly elated to be the subject of their irreverent reverence. They say you should never meet your heroes, but, in certain cases, it works out for everyone.

When a Meme Loves a Woman: The Resurrection of Michael Bolton