There’s always gonna be the guy to tell you that they remember FYF Fest’s humble beginnings, a single-day event at LA’s The Echo and Echoplex that featured a bunch of bands you’ve never heard of. Hell, I could even tell you about my first FYF, the first time it went outdoors at Los Angeles Historic State Park in 2009, when Black Lips, No Age, and Tim & Eric were the main attractions. Many could recall the huge fiascoes of those first few outdoor events where lines caused bands to play to near-empty fields and dust gave fans weird coughs for weeks afterward.

The point being that things change, and FYF is no different. FYF, though, hasn’t just changed; it’s grown and evolved. This will be the first three-day event in FYF’s history while it is also shifting back to July after many years of inhabiting the space of late August and early September. And it’s also changed the way its lineup looks and feels. Some longtime fans might gripe about the distance from its hardcore roots or the lack of a traditional indie rock headliner, but those are also the types that might still be bemoaning the line they stood in for two hours in 2011. 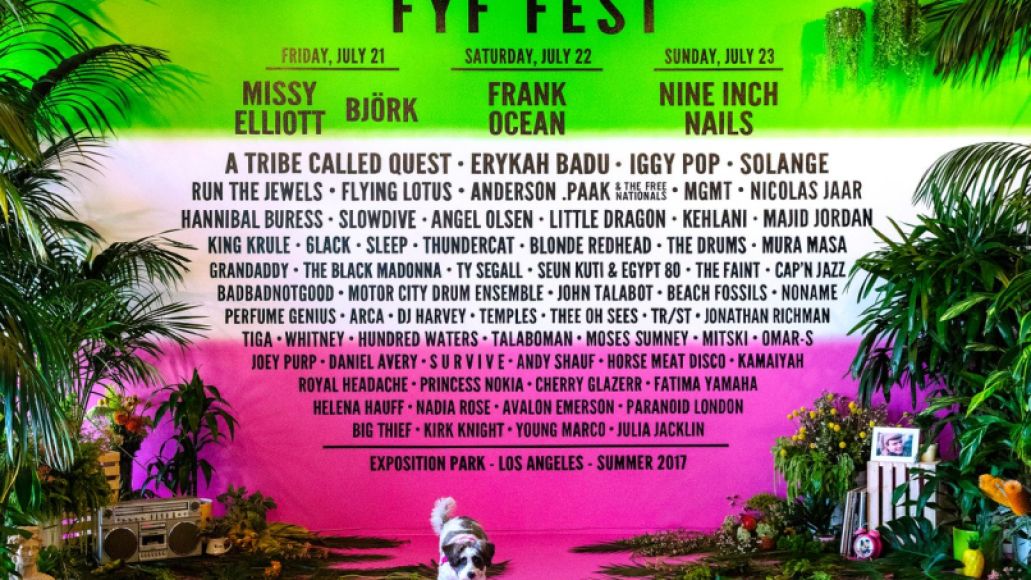 In 2017, FYF Fest reflects the best of music’s past, present, and future. They still know they draw a more sophisticated and discerning music fan, so nods to music’s rich history include the likes of Iggy Pop, Missy Elliott, Nine Inch Nails, Slowdive, Grandaddy, Blonde Redhead, and Bjork — all acts whose musical legacy is secure and bring prestige with them wherever they play. They also look to both the charts and the critics for the brightest in what’s happening right now, meaning you get artists like Run the Jewels, Frank Ocean, Solange, Anderson .Paak, and Angel Olsen. And the festival is looking ahead, which isn’t just displayed in the formidable undercard, but also in the way the lineup is composed in demographics. When festivals are increasingly reminded of the importance of diversity and representation, FYF puts out a lineup with two women on the top line, an abundance of people of color, and a wide range of sounds that reflects contemporary music fans’ increasingly omnivorous tastes.

Keep in mind that a new festival will be launching in a few weeks in Southern California called When We Were Young. In many ways, the booking resembles some of those early FYF events, with Morrissey, Descendents, Joyce Manor, and FIDLAR all having played FYF in the past. But it also notably received criticism for its lack of inclusion, with a bill that largely looks backward both musically and socially. FYF is happy to let someone else take that torch and move on to an ideal of what festivals can and should be. It’s not perfect by any means, as noted by a lack of Mexican-American artists in a city that’s nearly half Latino, but it does show that it’s possible to line up great performers with great songs that represent more than just white millennial males. That’s reason enough to say fuck yeah.