When Peter Parker swings back into theaters for Spider-Man: Homecoming, he’ll be pursued by a metal-winged Michael Keaton. The acclaimed actor plays antagonist Adrian Toomes, aka the Vulture, in the first joint production between Sony Pictures and Marvel Studios. We’ve caught glimpses of the villain in trailers for the film, but a new USA Today profile has provided us with a few new images, plus details about his origin and motivations.

According to director Jon Watts, Vulture is different from most other Marvel Cinematic Universe villains in that he’s really just a disgruntled everyman. “My whole approach for this movie is that we’ve seen the penthouse level of the [Marvel] universe,” Watts said. “We’ve seen what it’s like to be a billionaire inventor and to be a Norse god. We’ve seen the very top of this world. But we’ve never seen what it’s like to be just a regular joe.” (Someone hasn’t been watching the Netflix series.)

In the film, Toomes operates a salvage company that picks up after the city-demolishing battles from films like The Avengers and Iron Man 2. When one mistake leads to his contract being given to a government-run organization founded by Tony Stark (Robert Downey Jr.), Toomes sets out for revenge. “Some people see themselves as victims — he sees himself a little bit like that,” Keaton said. “He probably would have a strong argument that he never got a fair shot — a lot of ‘Why not me? Where’s mine?’”

Utilizing “this neat junk from all the other movies” that he has salvaged over the years with his crew — which includes classic bad guys Shocker (Bokeem Woodbine) and the Tinkerer (Michael Chernus) — Toomes constructs the armor that turns him into the Vulture. “It’s a really great starting point for the villains to have the Vulture picking over the stuff and finding the valuable exotic elements and having the Tinkerer assemble into something that could be used,” explained Watts.

As evident in the above image, the design of Keaton’s Toomes will pay homage to some of the comic book incarnations of the character, including the fur-collared bomber jacket. The picture below, however, shows how his super-suit has received a high-tech makeover. 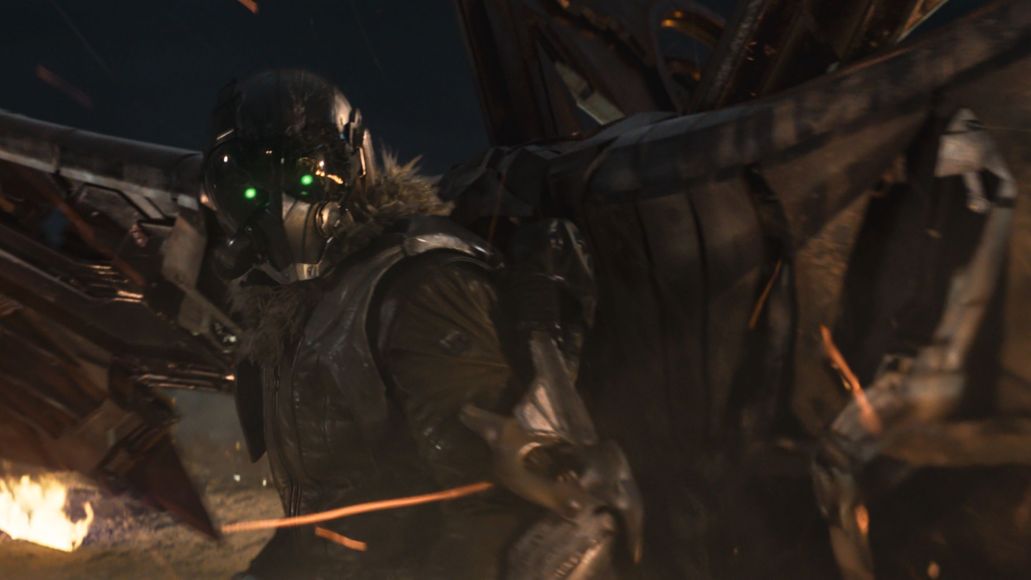 Vulture will do battle with Tom Holland’s Spider-Man when Spider-Man: Homecoming hits theaters on July 7th. Sony has teased that a new trailer will be released tomorrow (Tuesday, March 28th) with a preview clip that shows off some of Spidey’s wild new Stark tech. Check that out — as well as some recently released posters — below.

Here are the first official images of Michael Keaton as the Vulture in Spider-Man: Homecoming