This feature originally ran in July 2014. We’re reposting in time for The Shins’ new album, Heartworms.

Ever wonder which movies inspire your favorite bands or how filmmakers work with artists to compile your favorite soundtracks? Sound to Screen is a regular feature that explores where film and music intersect. This time, it’s an ambivalent trip to the Jersey ‘burbs.

For a while, it really looked like Zach Braff would only direct one movie. This was surprising, given that his last feature, Garden State, managed to tap into the zeitgeist for a generation raised on overmedication and self-doubt. Whether this was a good or bad thing has become a point of much debate, but it can’t be disputed that the film had a distinctive eye and a wealth of empathy for its oddball universe of dead-eyed zombies (metaphorical category — Snyder’s Dawn of the Dead was only just catching on), stoners, homebodies, disappointments, and all other manner of characters.

Now that Braff’s controversial Kickstarter-funded release, Wish I Was Here, is finally making its way into theaters, the inclination is to look back at one of his most beloved works. While Scrubs was sullied for many (this writer included) by its cancellation after a poignant quasi-series finale, only to be revived on a new network with a “next generation” cast and little of its original charm before dying a quick death, Garden State is still a flawed but often resonant portrait of aimless twentysomething lives, painting its tragedies and victories in equally muted strokes.

Garden State is often a good film. It’s also sometimes a film that carries itself with such assiduous importance and weight that it’s hard to take it seriously. And the scene that both admirers and detractors tend to land on is the one that best illustrates this and tends to be the litmus test for viewers on the fence about whether they like it or not. As Braff’s Andrew Largeman waits to see a therapist who’ll eventually tell him that his father has been misdiagnosing him and giving him overly severe drugs since Largeman’s mother suffered an accident in his teens, he sits in the waiting room, his gaze as impassive as every other moment in the film’s first act. Then he meets The One Who Changes It All. 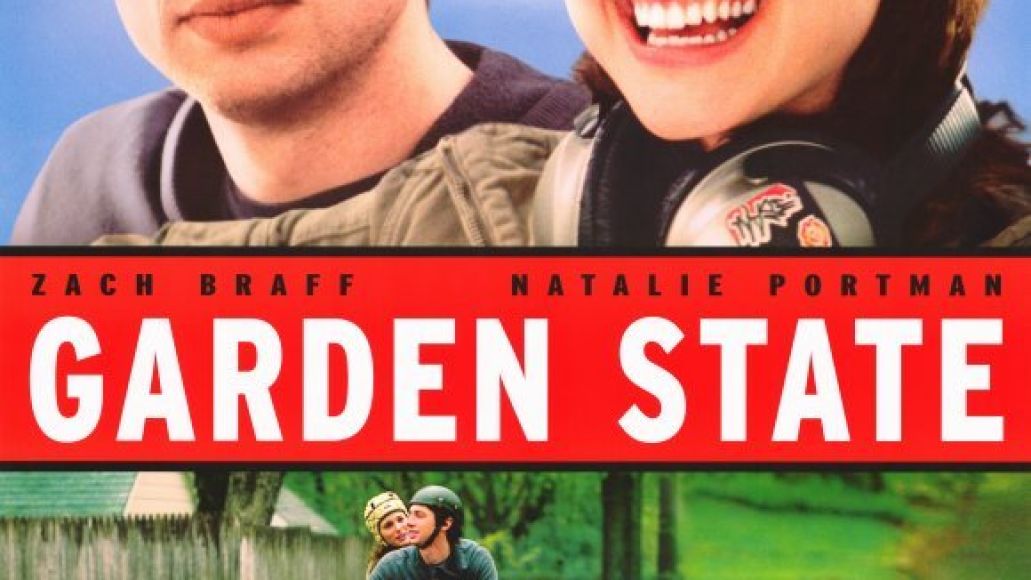 To be more specific, he meets Sam (Natalie Portman), a young woman who radiates warmth, and empathy, and the sort of life-affirming optimism that Largeman spends much of the film chasing through suburban New Jersey. They have a conversation regarding dog erections and Largeman being “into it,” the beginning of the film’s shorthand for the ways in which people lost in the fog of depression and endless contemplation retreat from the world. She then takes the oversized headphones from her neck and informs him that she’s listening to The Shins and that they may just change his life. He puts them on, and it’s “New Slang” from their debut, 2001’s Oh, Inverted World.

It’s a moment that everybody who’s seen the film remembers. The naysayer argues that it’s a treacly, oversentimentalized bit of nonsense, an excuse for Braff to foreground a song that caught him a case of feelings at some point in his own life. Those in favor might cite it as the moment when Largeman begins to return to the world from his own self-imposed exile, and the beginning of the film’s key romance. It functions like a psychological test, asking whether Portman’s radiant smile from Braff’s POV as James Mercer croons “Gold teeth and a curse for this town/ Were all in my mouth/ Only I don’t know how they got out, dear” works for each viewer or turns them away.

Granted, Braff is making a hard sell here; Sam tells Largeman that “You gotta listen to The Shins. It’ll change your life.” But as time goes on, corny as it may be, this moment’s iconic status (by indie movie standards, anyway) speaks to the appeal of Garden State. Not only did this end up accomplishing its mission, exposing a great many more people to The Shins and turning theirs into a somewhat unlikely success story, but it captures the feeling of a song and a pretty stranger being able to awaken lives from reserves of pain and sadness. It’s also Nathan Rabin’s theory of the Manic Pixie Dream Girl in microcosm, and again, Garden State either pulls you in or it doesn’t. There’s not a lot of middle ground, really.

It helps that Mercer’s ballad taps well into the tone of the film and that Braff uses a song that fits the tone without cheesily attempting to coach the audience on what they should be feeling at that moment. (This happens later in a sequence involving Remy Zero’s “Fair”, a lovely song that’s used as a little bit of a bludgeon in the film.) And curiously enough, it’s a line later into the song, not used in the scene, that perhaps captures the film’s central thesis best: “I’m looking in on the good life I might be doomed never to find/ Without a trust or flaming fields am I too dumb to refine?” It’s not initially love and closure Largeman comes home to chase. He’s there to say goodbye to his mother, but he ends up on a long-overdue odyssey of the self. And it starts here, with a beaming young woman putting him onto Mercer’s memorable croons.

The whole of Garden State is built around its music choices, from a pet funeral staged to Colin Hay to Frou Frou’s “Let Go” over the film’s warmhearted final scene, but it’s “New Slang” that’ll always be associated with the film. Neither Sam nor Largeman is perfect, but they eventually find their way together, and they have Mercer’s words of liberation from everyday banality to go on. While it’s a simplistic way of approaching issues like depression, and the film sort of forgets that Largeman’s mom recently died by its end, somehow it’s a film that cuts through cynicism, just like the endlessly optimistic Shins tune that sustains it. For what awaits them after the film, “New Slang” seems to believe in good things going ahead: “And I’d ‘a danced like the king of the eyesores/ And the rest of our lives would ‘a fared well.” Garden State may be obvious, but it also believes in the resuscitative powers of love, hope, and casual drug use. It either pulls you in or it doesn’t.