Ever look at the lineup of a film festival and lament all the movies you’ll miss, either because you can’t go or a decent number of them will never see a wide release after that point? Well, Amazon has taken a big step toward bridging that gap, by cutting out a substantial number of middle men and bringing those releases to audiences directly.

In January, Variety reported that the company, through its Film Festival Stars initiative, had started a new program for independent filmmakers who want to self-distribute without the tedium of chasing studio interest. A number of filmmakers at Sundance were offered a different kind of deal: up to $100,000 for the exclusive SVOD (Streaming Video On Demand) rights to the film for two years through Amazon Video Direct (AVD), with the first year’s rights being exclusive, and an agreed-upon cut of the streaming royalties. More details, from that Variety article:

“Amazon said the bonuses for Sundance films that opt for AVD distribution may be used at the filmmakers’ discretion, but that the cash is intended to let filmmakers subsidize self-funded theatrical distribution and/or other marketing efforts in support of their film.

In addition to the cash bonuses, Amazon is sweetening the pot for Sundance filmmakers by doubling the royalty rates their movies will earn on Prime Video versus the regular AVD rates.

It’s the next step for Amazon after their Amazon Studios imprint introduced the conglomerate as a new major player in the film industry. After picking up a number of acclaimed titles last year (Manchester by the Sea, The Handmaiden, Love & Friendship, et al.), their Prime service now looks to become the second phase of Amazon’s encroachment on the traditional models of film distribution that have existed in their current form, in some way or another, since the Golden Era of Hollywood. Whereas those previously mentioned titles were established as theatrical releases first, and would come to Amazon after the releases ended, the Film Festival Stars titles would go straight to AVD.

On its face, it’s an incredibly appealing offer for no shortage of reasons. Independent distribution is often difficult to find; take Sundance, for instance, where at the conclusion of the festival 42 films had been picked up for distribution. This is less than half of the feature-length films that premiered at the festival, few of which had prior distribution. The Film Festival Stars program has already selected 12 titles as of this publication that weren’t grabbed at Sundance, films that are now guaranteed the possibility of a much wider audience. (A quick glance at the titles selected will indicate that a majority are foreign releases, often a hard sell in the US given the relative dearth of independent movie venues outside of major urban areas.)

It’s also a model that allows for the kind of creative freedom that more and more studios are clamping down on in favor of focus grouping and controls. While that kind of behavior isn’t nearly as prevalent at the independent level, there’s the inescapable truth that not all independent film distributors are made equally. A Fox Searchlight or a Focus Features, an imprint owned and bankrolled by a major studio, has far more ability to get a film in front of a wide audience than the average company, which has to figure out how to get a film into theaters in general and to make people notice. What Amazon offers here is a decreased pressure for filmmakers as far as telling singular, hard-to-sell stories without the traditional anxiety of finding adequately lucrative distribution. And considering that these deals are being made “haggle-free,” as Amazon puts it, there’s less concern as far as censorship and studio interference goes as well.

But there are still definite questions to be answered about some aspects of the deal. The biggest and most immediately apparent is that this will only continue to dilute the market for independent films. Though access might change this over time, there are only so many moviegoers who tend to be interested in indie and foreign releases (particularly the smaller ones that the FFS program is courting), and a market already hyper-saturated with festival releases will only become markedly more so. This initiative is only as good as the number of people who’ll be enticed to watch, and that remains a glaring intangible going forward.

That’s to say nothing of the general noise of a streaming service; stop and consider for a moment how often you may have found yourself scrolling through Netflix menus for too long at a time, so inundated with possibilities that option paralysis began to set in and you ended up watching TV reruns instead. While AVD provides a well-maintained service through which these movies can be viewed, there’s no guarantee beyond that basic presence that audiences will hear about the films, or be compelled to seek out any particular one. While Amazon clearly notes that the initial payouts are intended to be used for further theatrical distribution or self-promotion, this creates a scenario in which the film can only get as much buzz as the filmmakers are able to put behind it. In this respect, it’s arguable that not that much actually changes for a low-budget filmmaker; the film is easier to see, but the actual marketing remains entirely out of Amazon’s hands. The streaming giant gets all the benefit of viewership, but the accountability for guaranteeing that viewership remains with the filmmaker.

Consider the payout structure for the FFS films: “Amazon will pay $100,000 for US dramatic films and premieres, and $75,000 for US documentaries and documentary premieres. It’s offering $25,000 for World Dramatic, World Documentaries, Next, Spotlight, Kids, Midnight and New Frontier selections.” While this is directly tied to Sundance, it offers clear insight into which films get the biggest offers and which don’t. And much like the industry at large, documentaries and foreign films are simply offered less than dramatic releases with better odds of breakout success. They’re then left to self-promote with what they have, to emerge from the clutter of an Amazon Prime home page. 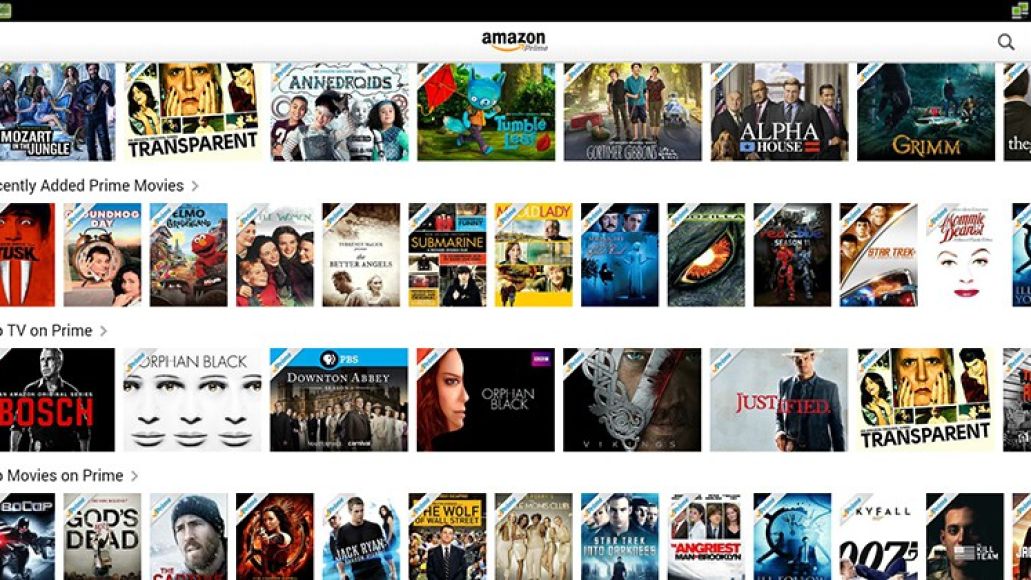 There’s also the matter of Amazon’s other Sundance pickups, which will stay within the Manchester model of a theatrical release being followed by a Prime rollout. Films like Michael Showalter’s fest hit The Big Sick will have Amazon’s formidable marketing muscle behind them, while the FFS releases will be left to the filmmakers to promote. While it remains to be seen how AVD’s relationship will look with these films, it’s not too difficult to imagine a scenario in which the major pickups are privileged over the smaller releases, and while this is common to most studios, there’s a far more noticeable gap in this case, when some films are granted theatrical distribution out of hand and others are left to the whims of the filmmakers. Outside of those admittedly appealing streaming royalties and the guaranteed ability to view the films, there may not be as many differences between Amazon’s offering and a typical independent pickup.

The FFS program could be lucrative for filmmakers or a lateral move; only time will tell. In a world where the Sundance Jury Prize winner for the US Dramatic Competition is already available on Netflix a month after the festival ended, it’s clearly the way things are headed for more and more independent filmmakers. And with Amazon set to extend the same offer at this year’s SXSW Film Festival, Tribeca Film Festival, and Toronto International Film Festival, it’s possible that Amazon could begin to corner the market on fringe releases. It’s certain that more people will have a chance to see these films than may have otherwise, but that’ll only go as far as making the audience aware of them. And to do that, Amazon and the involved filmmakers will have to solve a problem that’s been around as long as independent filmmaking has.

The Future of Indie Filmmaking Could Happen on Amazon Prime