The set times for the 2017 edition of the Coachella Valley Music and Arts Festival have been released. As expected, there are plenty of decisions to be made as to which bands to check out on each of the three days. For fans at home, the YouTube stream with on-demand playback might make things a little easier, but in the desert, you only have one shot. As such, we’ve broken down the 10 biggest conflicts and made our suggestions for who to see. 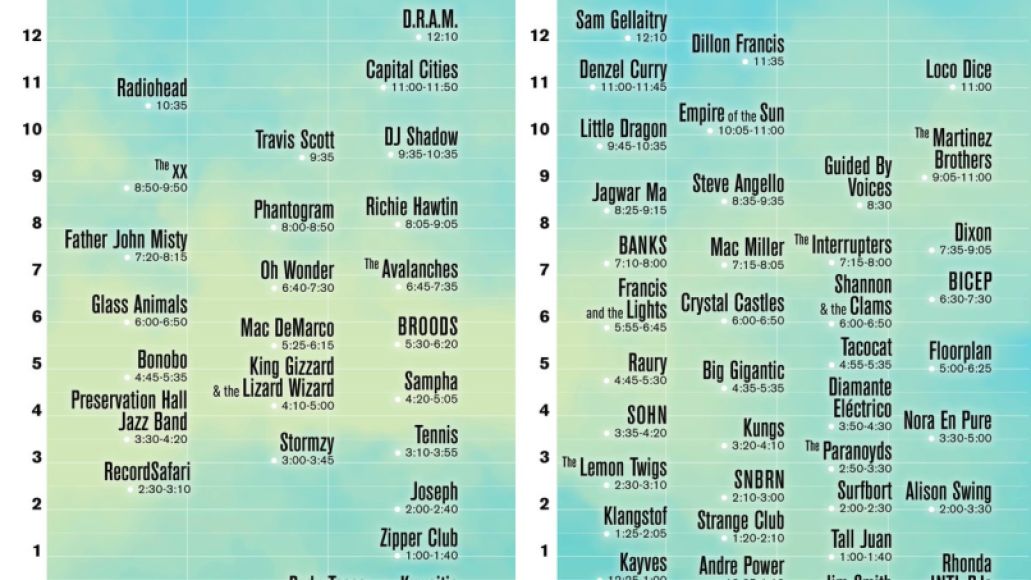 So who drew the short straw of having to play against Radiohead? Sorry Empire of the Sun, Denzel Curry, Loco Dice, D.R.A.M., Dillon Francis, Capital Cities, and Sam Gellaitry. Better luck getting some fresh ears on you at other 2017 festivals.

This is an unfortunate one. Gucci Mane is one of Coachella’s most interesting bookings, less than a year after his release from prison. Nicolas Jaar, on the other hand, is a live god and, as witnessed a couple weeks ago in Mexico, is going to be a best-set contender at every festival he performs at this year. Rap versus experimental electronic. It might just depend on your mood.

This isn’t so much a tough decision as it is a bummer for a couple of great live performers. DJ Shadow is a fixture at Coachella, and seeing an artist that comfortable on the Polo Fields is a treat, allowing him to really take chances, knowing he’s been here before and will be here again. Little Dragon has also played Coachella in years prior and is taking advantage of their Indio stay by premiering their new record at the motherfucking Integratron. Still, Travis Scott is probably gonna have guests, and it might be Kanye West, so it’s worth it just for that possibility, right?

07. Whitney vs. Skepta vs. The Belleville Three

Whitney is getting a perfect slot for their laid-back retro rock: a late-afternoon, outdoor chill fest. Should be a no-brainer, but they are going against a super rare appearance from dance pioneers The Belleville Three and Skepta, the London rapper who had to cancel his trip to the US last year because of visa issues. Even though Whitney might seem like a perfect festival moment, it’s hard to pass up rare chances with quality artists.

Our Pick: Fuck it, we’re gonna see all three. Don’t ask us how. Start with Skepta, run over for the last bit of Whitney, and then trot over to The Belleville Three because their set is frickin’ two hours long. 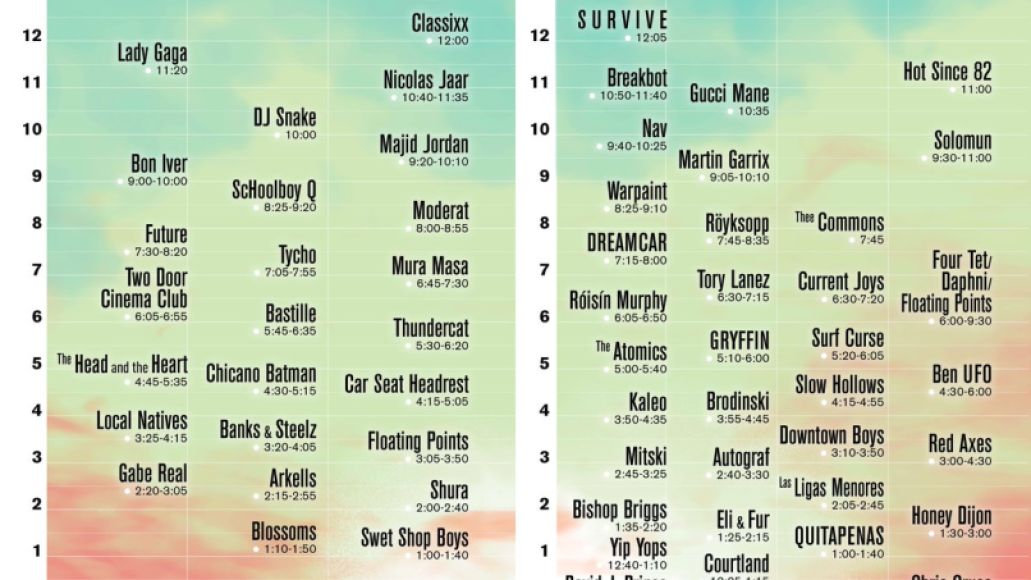 06. Four Tet/Daphni/Floating Points vs. Everybody

So, this was unexpected. Four Tet, Daphni (Caribou main man Dan Snaith), and Floating Points (though also performing a live set earlier in the day) are all sharing a three-hour slot in the Yuma. You can go and immerse yourself in this weird world of electronic music, or you can watch the likes of Future, Tycho, Bon Iver, Two Door Cinema Club, Moderat, Warpaint, and a good portion of Saturday’s programming.

Future Islands are fresh off their new album and have a date lined up with the Outdoor Theater just before sunset on Sunday. This seems like a can’t-lose set. But then there’s Kaytranada, one of the most exciting producers of recent years, getting the huge dance tent he deserves over in the Sahara. It’s essentially the dueling forces of Coachella at their worst, where soaking up the sun at the best time of the day competes with what might be the weekend’s best dance party.

04. Mitski vs. Floating Points vs. Downtown Boys vs. Banks & Steelz vs. Local Natives

Holy cow. This one really runs the gamut, and because of how they’re staggered, it’s still possible to catch more than one of the artists. There’s Mitski, stuck in a tent but performing the biggest set of her career. There are local favorites Local Natives, undoubtedly receding in popularity but finally making it to the big Coachella stage. Then we have Downtown Boys, as buzzy of an artist as there is in music now, playing the brand-new Sonora stage. Throw into the mix the formidable Banks & Steelz and Floating Points, and you have a bit of a cluster.

Our Pick: Mitski is the most important of these sets, and then we’ll bounce to catch the second half of Local Natives. 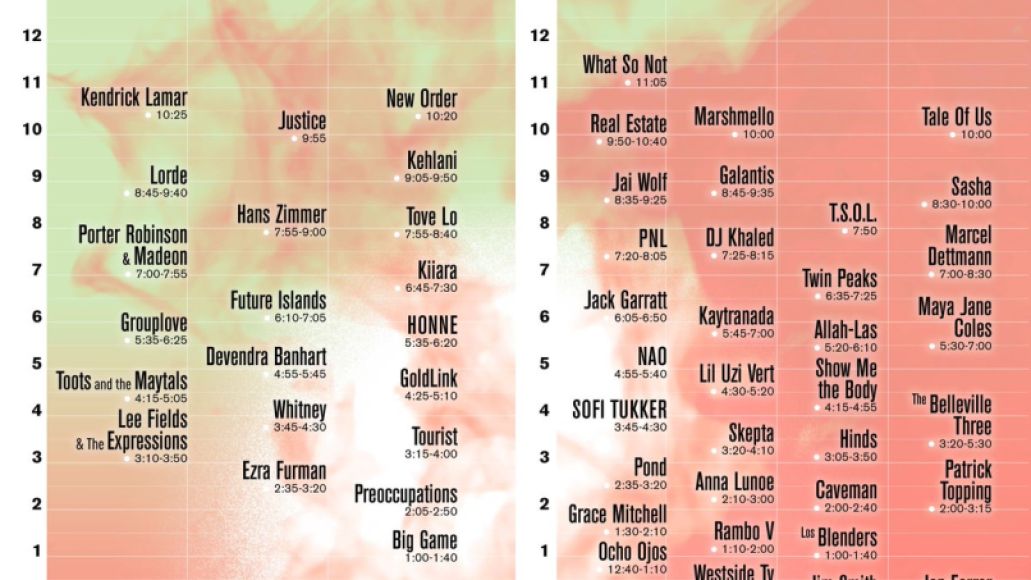 03. The Avalanches vs. Banks vs. Mac Miller vs. Father John Misty

Four very different beasts here. For The Avalanches, this is a set that Coachella regulars have been wanting for more than a decade, but it also feels a year late from being really enticing. Banks and Mac Miller will surely attract the more populist attendees, with the festival equivalent to vanilla ice cream, albeit delicious vanilla ice cream. And then there’s Father John Misty, an artist that we’d probably rather read an interview with than actually hear him perform his new songs. We kid, we love you, Papa John.

Our Pick: We’re catching most of The Avalanches, then heading over to the main stage for Father John Misty, if only to see if he is ready for the main stage of Coachella.

02. DREAMCAR vs. Future vs. Royksopp

DREAMCAR is the band made up of all No Doubt minus Gwen Stefani, with Davey Havok of AFI singing. Future is one of the biggest rappers alive, a two-time 2017 Billboard 200 topper, and a strong possibility to bring out a guest or two. Röyksoppp are legends in the dance world, and getting the bestelectronic music stage to perform. Consider us torn.

Fuck everything. Last time New Order played at Coachella in 2013, they went up against Phoenix and Sigur Rós. This year, only the biggest set of the weekend. Kendrick Lamar, performing two days after his new album, Damn., comes out, is the most unmissable set of the weekend. It doesn’t matter if you’re one of the greatest bands of all time.