It’s hard to believe that Star Wars is 40 years old. George Lucas’ myth-infused flight of science fantasy has empowered, imbued, and enriched four generations of moviegoers and counting. Whether you’re a casual viewer or a die hard fan, whether you checked out after the Original Trilogy or anticipate Disney pumping out pictures ad infinitum – heck, even if you’ve never seen a Star Wars movie: these films have profoundly shaped the world you’re living in. It should be no surprise that the series’ 40th Anniversary was a big bash.

Star Wars Celebration 2017, in Orlando, Florida, played host to the biggest names in a galaxy far, far away: George Lucas, Harrison Ford, Mark Hamill, John Williams, Kathleen Kennedy, Daisy Ridley, John Boyega, Rian Johnson, and myriad other creative forces who’ve shaped the world as a part of the cultural zeitgeist of Star Wars. They looked back at the series’ humble beginnings, the recent tragic loss of Carrie Fisher, and the epic new space operas to come in movies, television, games, books, and other media.

Since Celebration’s inception in 1999, just prior to the release of Episode I: The Phantom Menace, the show has materialized 12 times across the US, Japan, and Europe. It offers some of what you’d expect: an all-Star Wars dealers floor of classic and exclusive memorabilia, cosplayers and droids galore, autograph opportunities with actors major and minor. Since Disney acquired Lucasfilm, however, it’s become a hub for the latest and biggest announcements in the franchise. That transition to the Disney era of Star Wars marked a huge swell in the event. We were on site at the last US Celebration in 2015 and saw firsthand a Star Wars reborn. The Force Ghost of the Prequels had been exorcised, attendance had sky rocketed – this year even more so with a whopping 70,000 fans storming the Orange County Convention Center.

Though there was much to celebrate, and no shortage of cool experiences, the crowded event was a trench run, and required a Jedi’s resolve if you wanted to see the most coveted events and panels. These presentations are the heart of Star Wars Celebration: the behind-the-scenes looks, fascinating archival treats, and celebrity stage shows. In the dubious Star Wars tradition, overnight waiting was mandatory, and even then attendees still ran the risk of missing out – with fans needing to acquire wristbands to access each event, of which they were only allowed two a day. It was a convention meat processing plant on overdrive. Even the event’s store was a nightmare slog: three hours to get in to spend money at the event you already spent a ton of money to get into, then an hour waiting in the checkout line. No joke. Nothing was worth the hassle; especially not when all the biggest events were streamed, at least in part, online. What’s more, early looks into the production of the new films and announcements of future plans were few and far between this year. It’s enough to make the most die-hard fans reconsider spending their hard-earned credits to dock at this dubious spaceport.

Fortunately for us, we had press credentials. Otherwise, the coverage and insights we’re about to present you would have basically been impossible. And no, we don’t feel good about it. Nor do we have any good answers as to what can be done to circumvent the unfortunate effects of supply, demand, and ravenous fan culture intersecting. Fandoms are amazing, the Star Wars fandom especially so – and paying con-goers deserve more than to be under-serviced while their passion is milked to fill crowd shots. In spite of all this, the love of Star Wars, from both the spectacular fans and dedicated creators, ensured that the magic of Celebration still shone brightly underneath the carbon scoring.

This year’s opening ceremony was an unprecedented, once in a lifetime event. Billed as “40 Years of Star Wars” with “some of the saga’s brightest stars”, it was easy to assume that it would be a simple trip down memory lane with the already A-list talent that had been announced. No one, least of all the brave souls who camped out overnight, were prepared for what transpired.

As soon as George Lucas took the stage we knew all bets were off. Lucas’ conflicted feelings about his series direction under Disney were well known. What’s more, the past several years of Star Wars media had done much to cultivate the look and feel of the Original Trilogy and push the Prequel Era, which Lucas was the de facto symbol for, far behind. Had enough time passed for fans and creators alike to forgive and forget?

It would seem that the wound had healed. Now that there was the chance for new Star Wars stories without racist aliens and terrible dialogue, now that our Indiana Jones sequels could be (hypothetically) free from nuked fridges, we were ready to love Lucas for all his many triumphant successes in cinema. He was “the man whose collective genius brought us all together” and this was his panel. “George Lucas: This Is Your Life” … Or at least just the Star Wars bits. Lucas shared stories with Warwick Davis about the trials and tribulations of making a film with “mythological, psychological motifs” in the 1970s, and the dangers of signing your life away to a studio. He spent couch time with Dave Filoni, the Lucas protegee that he’d groomed as showrunner for The Clone Wars, who was now running Star Wars Rebels. 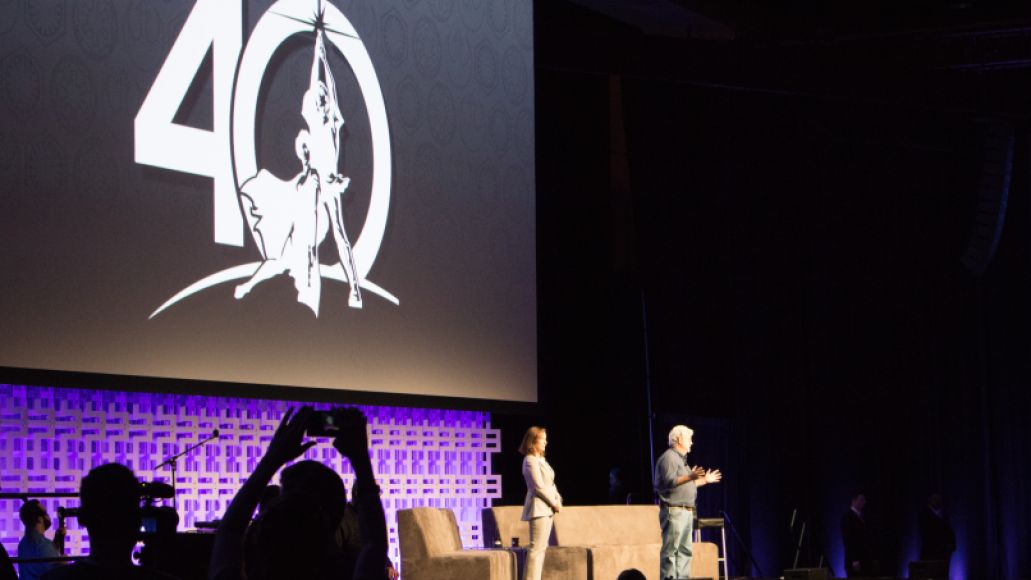 Hayden Christensen, Anakin Skywalker himself, was there too, appearing at Star Wars Celebration for the first time in 15 years. He was clearly nervous to be back, but was warmly welcomed with a standing ovation. Then it was on to the revered representatives of the Original Trilogy cast: Mark Hamill, Anthony Daniels, Peter Mayhew, Billy Dee Williams… and the jaw-dropping reveal of Harrison Ford. Ford famously avoids convention appearances, and when he does show up, usually has a stilted demeanor about him — but not this time. Lucas and Ford went at it, trading jokes and recounting the carpentry work for Francis Ford Coppola that landed him a date with Hollywood destiny. Ford even quoted Indiana Jones to take a jab at his recent airplane crash landings: “fly yes, land no!”

Everyone in the room knew we were witnessing something special. A once in a lifetime Star Wars gathering the likes of which won’t ever happen again. And then they upped the ante once more. We were shown a powerful, tear-jerking tribute to Carrie Fisher. After all, it wouldn’t be a Star Wars Celebration without a room of fans weeping together after being hit right in the feels. But if you weren’t bawling already, then came the killing blow: a curtain pulled back to reveal John Williams conducting the Orlando Philharmonic Orchestra playing “Princess Leia’s Theme”. It was an unreal and melancholic moment of Star Wars bliss: a room full of pop culture icons and their biggest fans, mourning a beloved friend together.