Of the five drummers who’ve sat behind the kit for Pearl Jam, only founding member Dave Krusen and current stickman Matt Cameron were inducted into the Rock and Roll Hall of Fame last Friday night. Though Pearl Jam had no say in which members were honored, they still sought to rectify the situation by inviting all of their former bandmates to attend the ceremony as their guest. However, that wasn’t enough for Dave Abbruzzese.

Abbruzzese, who drummed in Pearl Jam from the 1991 tour behind Ten to the recording of 1994’s Vitalogy, has not held back in his displeasure over being snubbed from the Rock and Roll Hall of Fame. “It make my years of hard work appear to be worthless towards the success born of the formative years of Pearl Jam,” Abbruzzese wrote in an open letter posted shortly following the initial announcement of the band’s induction back in December. He called on his former bandmates to “do the right thing,” adding, “They can’t justify ignoring my contributions. Like me or not. If there is still a part of that band that remembers how hard we worked, how much blood and how much sweat … They will do the right thing.”

Now, in the wake of last weekend’s induction ceremony, Abbruzzese is again speaking out. In a lengthy comment posted to his YouTube channel (via Alternative Nation), Abbruzzese said he did not attend the ceremony because he “wasn’t invited.” He wrote, “The band tweeted that they welcomed the idea of the event granting the possibility of all the drummers to be in the same room. That isn’t an invite.”

However, even if he had been invited, Abbruzzese said he would not have attended. “To do that would justify the mistake and disrespect the core fans that took this band to heart back when all we were to become, we had to earn and also, most importantly, we had to prove we deserved every single time we took the stage,” he explained.

In his comment, Abbruzzese also suggested that his impact on Pearl Jam was greater than that of his peers, writing: “For the band to put me in the same light as Matt Chamberlain & Dave K really was a slap in the face. Nothing to do with those guys as people or players. Respect… but as a contributor? A band member? A definitive contributor to the energy and power of where the band went? …the sacrifices, the work, the physical and emotional contributions…not to mention the personal weight of carrying onthrough and after unceremonious and disrespectful way I was fired. I gave this band all I had to give every single moment I was in it. I never played for a paycheck. I never let the band down. I never let the music down. I never let the fans down… not once.” 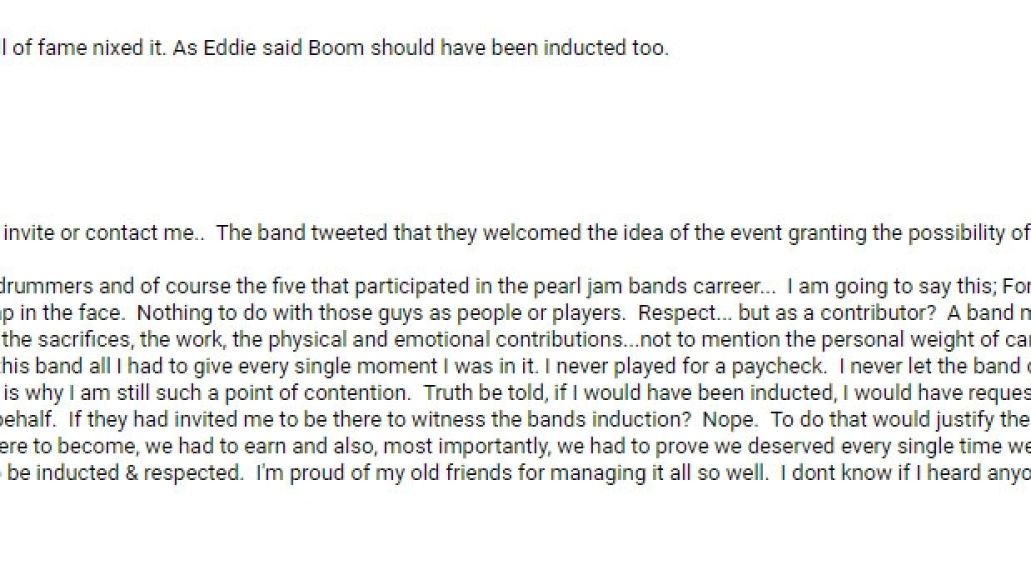