Pink Floyd created pretty powerful noise back in their day, thrusting progressive psych music into new territory with their shredding guitars and pounding drums, making them some of rock’s greatest titans. Now, another creature that generates some immense sound of its own has been named after the classic rockers — and it’s a shrimp.

Synalpheus pinkfloydi, a “pistol shrimp” capable of creating a deadly blast of sound up to 210 decibels by snapping its enlarged pink claw, was named after Dr. Sammy DeGrave’s favorite band. The head of research at Oxford University Museum of National History, DeGrave has been waiting years to name a species after Pink Floyd, and synalpheus pinkfloydi’s hallmark pink appendage made it the perfect choice.

“The reference is to the line, ‘By the way, which one of you is Pink?’ from the song ‘Have A Cigar’,” DeGrave told NPR. “The story is when Pink Floyd first went to America, people thought one of the band members was actually named Pink. A reporter asked, ‘Which one of you is pink?” so that’s what stuck in our mind and that’s where [the name] came from.”

Coincidently, there’s a legend that says Pink Floyd once played such a loud show (97 dB, not even half as loud as the crustacean named after them) that the fish in the pond separating the band from the crowd died. Now, it’s more probable the dry ice the production crew filled the lake with did the deed, but the parallels to synalpheus pinkfloydi’s attack method are pretty amusing.

Check out an image of the crazy critter below. 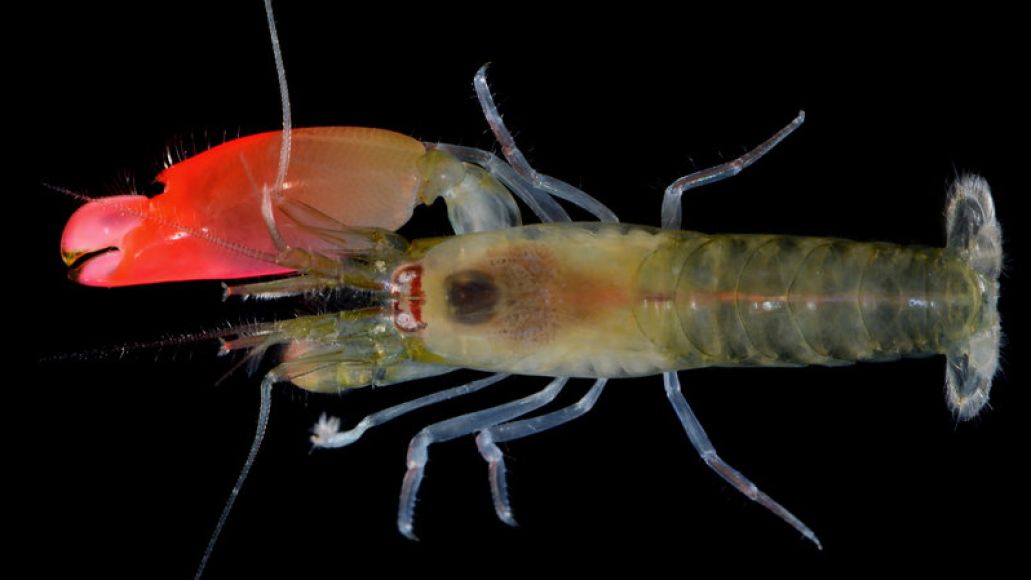 Pink Floyd just got a deadly loud shrimp named after them