This feature originally appeared in January 2016

It’s doubtful that when Coachella was designing its first lineup poster leading up to the inaugural 1999 edition of the world-famous festival that they had any idea how iconic it would become. Well, that’s not true. That first poster is decidedly not iconic, and they drastically changed the design for future events. But the Coachella poster, as a whole, is hanging on countless walls, its release anticipated by music geeks for months. It’s a thing of symbolic significance beyond just a list of bands playing a concert.

The current poster design has been in place since the fourth installment of Coachella in 2003, except for a one-year diversion in 2008. The idea is simple: The festival lineup is broken up by day, with font size getting smaller as that day shifts from marquee acts to lesser-knowns. Over the years, bands like Muse, The Killers, Kings of Leon, and Calvin Harris have climbed out of the tiny-font status into the largest font possible, and likewise, a band like Jane’s Addiction or a groovy laid-back dude like Jack Johnson would never be considered headliner status in this day and age, like they were in 2001 and 2008, respectively.

And so evolved this project. We’ve taken every past Coachella lineup poster and rearranged the bands so that they appear as we’d bill them today. Some lineups reveal themselves to be remarkably strong in this light, while others have not faired well against the cruelty of time. We’ve also gone ahead and placed them in order of worst to best because, well, we’re Consequence of Sound and that’s what we like to do.

So flip through the 17 posters, re-ordered by our staff and re-designed by Art Director Cap Blackard to reflect modern-day popularity, and feel free to take over the comment section and let us know how you’d do things differently. 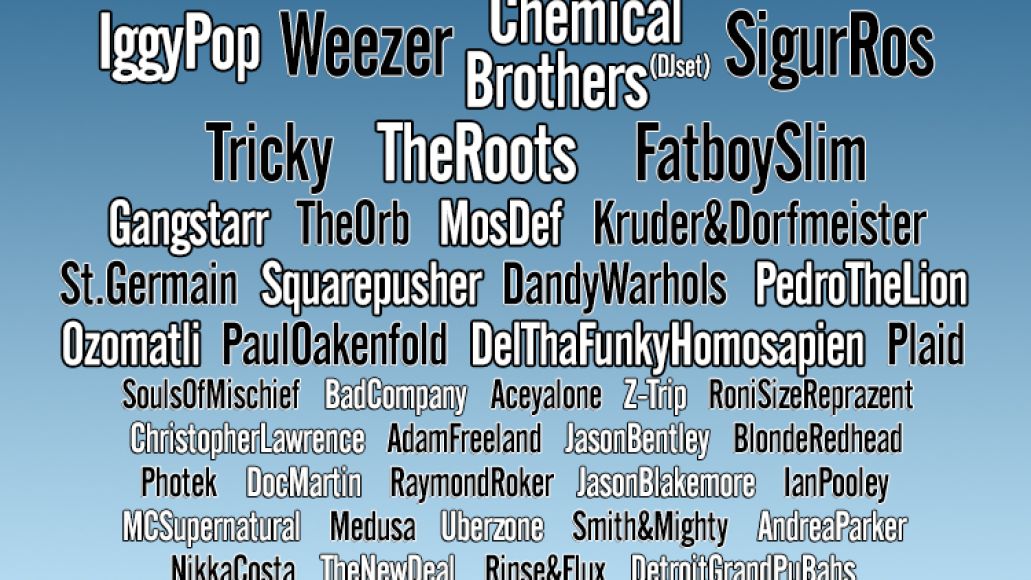 The Good: The second Coachella came after a year off and, in hindsight, is best at its most esoteric. Appearances from Squarepusher, Gangstarr, and Pedro the Lion wouldn’t likely draw people onto the polo fields, but would turn some on to lesser-appreciated talents.

The Bad: Lots not to like about this Coachella, namely the lack of a viable headliner. At this point, acts like Jane’s Addiction and Weezer are hardly “gets” for a major music festival, while many others like Tricky, Blonde Redhead, and Mos Def are about a decade beyond their prime as innovative artists. More than any other Coachella lineup, this one has aged particularly poorly, with not a single smaller font act going on to become a major star.

Notes on the Original (See Below): What’s kind of wild is how much electronic music this early Coachella hosted. Five of the first seven acts listed would be considered dance music of some sort, making arguments that Coachella has favored EDM too much in recent years lose some of its weight. Unfortunately, this is also one of the most dude-centric lineups of any music festival ever. Look down that list and try to find a woman. It’ll take a while. 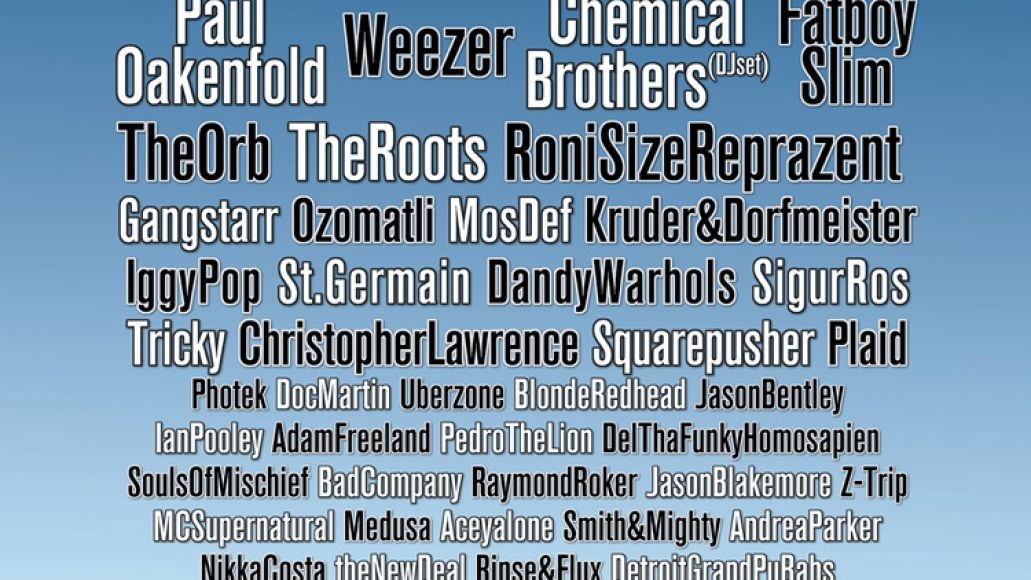 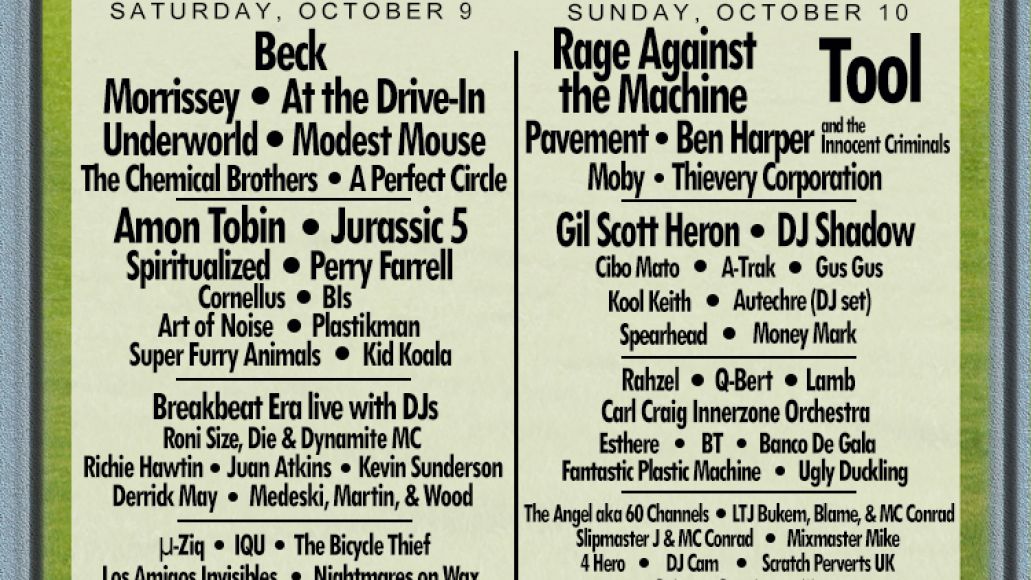 The Good: Even 17 years later, those headliners would still play, with the top two on each day very much deserving of a marquee status. Wild that even in its inaugural year Coachella tapped marquee acts that have maintained such a status for almost two decades. And even beyond that, with acts like Pavement, At the Drive-In, Modest Mouse, and Moby, the top little section of the poster is particularly stacked.

The Bad: The bottom half of the lineup. This is just from the fact that after 17 years, a lot of the acts that played the first Coachella have faded into obscurity.

Notes on the Original: So many of the groups that played this first Coachella have gone on to become festival regulars, speaking to the idea of certain acts being “Coachella favorites.” This includes Pavement and At the Drive-In choosing the festival as the start of their American reunion, all of the headliners coming back for repeat engagements, and electronic acts like Roni Size, Amon Tobin, and the Chemical Brothers becoming fixtures. 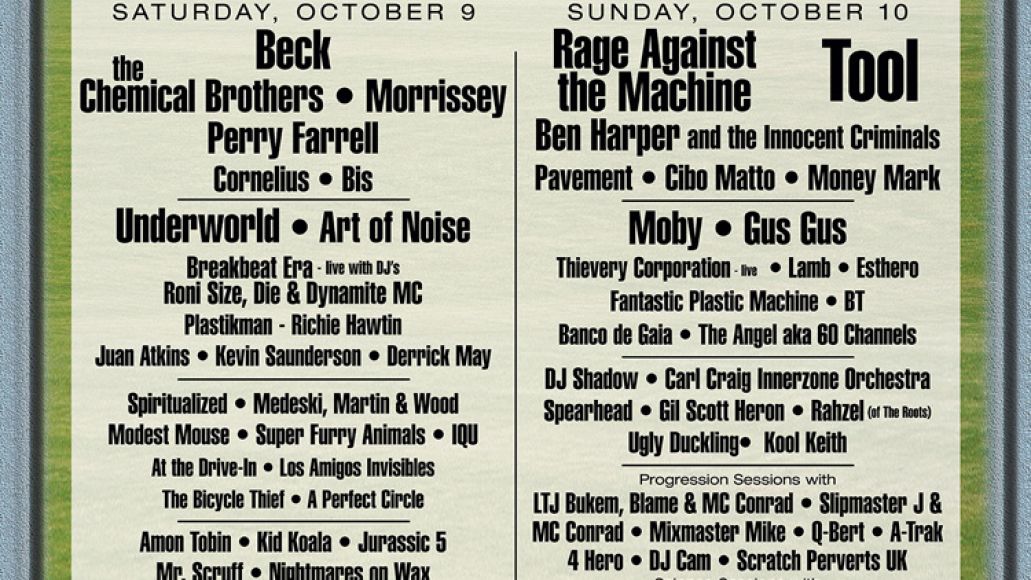 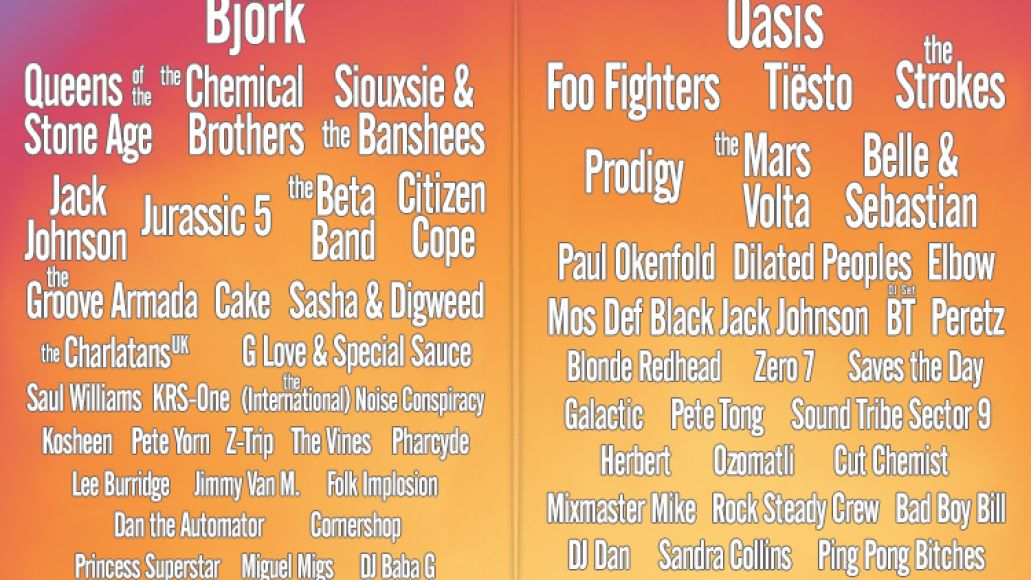 The Good: If this Coachella were announced today, there would be some great gets, including an Oasis reunion, an appearance from Foo Fighters, who have managed to avoid headlining the fest ever since, and Siouxsie and the Banshees. Foos along with the Strokes, Queens of the Stone Age, and the Mars Volta also make it one of the most rawk-heavy tops of the bills.

The Bad: In hindsight, this lineup suffers for some questionable choices in taste. Acts ranging from Jack Johnson, Cake, and G-Love to Citizen Cope, Pete Yorn, and Ozomatli. The overall feel of the lineup suffers from a strange juxtaposition of KROQ radio acts of the time and the more obvious choices from the underground.

Notes on the Original: Sunday was definitely the better of the two days at this Coachella, with reordering the lineup making it look a little more appealing. The original poster’s low billing of Queens and Mars Volta hides a couple of the event’s strongest acts. This year also showed early Coachella’s tendency to stick with the known, tapping the Chemical Brothers for the third event in a row, and Paul Oakenfold and Blonde Redhead for the second consecutive year. 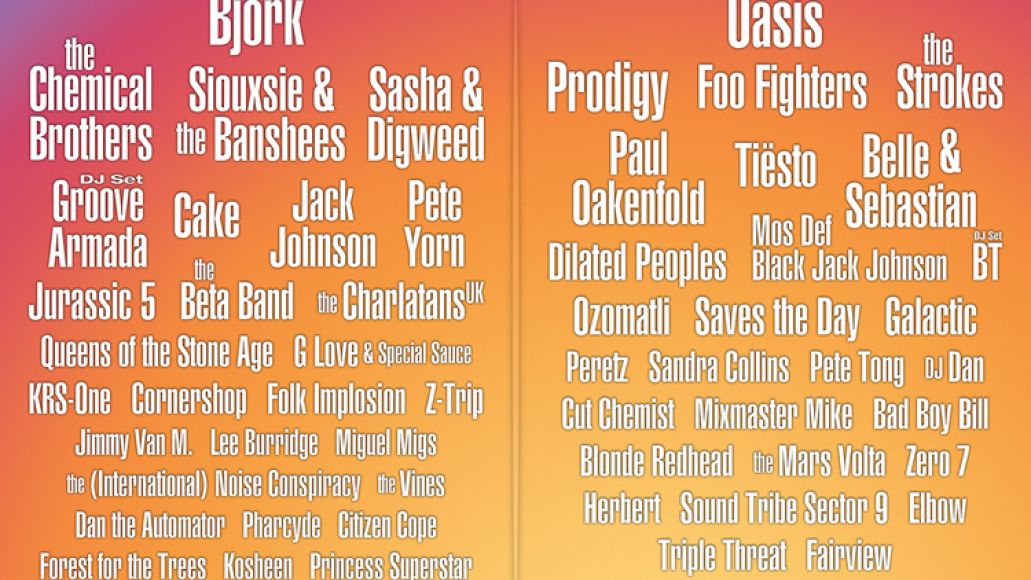 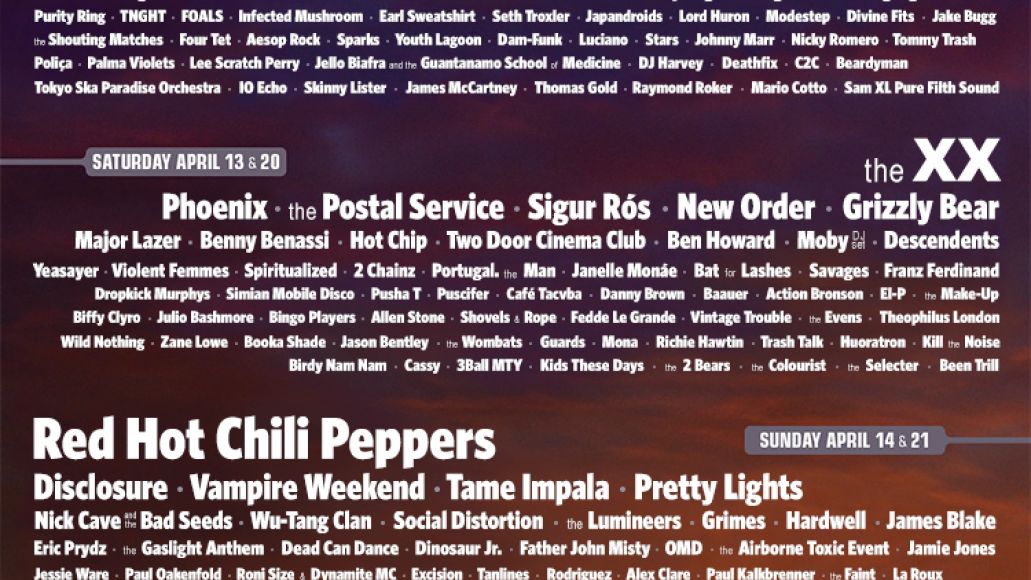 The Good: What may go down as the end of indie rock being king at Coachella; it went out not with a bang but a whimper. Still the lineup does feature a number of good gets, including a double portion of Nick Cave and Trent Reznor’s How to Destroy Angels. Appearances from rising acts like Tame Impala, Vampire Weekend, The xx, Disclosure, and Grimes also look great just a few years later.

The Bad: The headliners. While Blur and the Stone Roses excited a very vocal minority of the Coachella demographic, the reality is that no one watched them. Substituting them out for alt-J and Bassnectar doesn’t really make things that much better. The event’s other original headliners, Phoenix and the Red Hot Chili Peppers, also haven’t aged well.

Notes on the Original: The year of the sandstorm on Weekend One, 2013 certainly feels like a dividing line in hindsight, with 2014 beginning an era of special guests and younger demographics. Lou Reed appeared on the original lineup, but wouldn’t be in good enough health to play, eventually passing away in October. 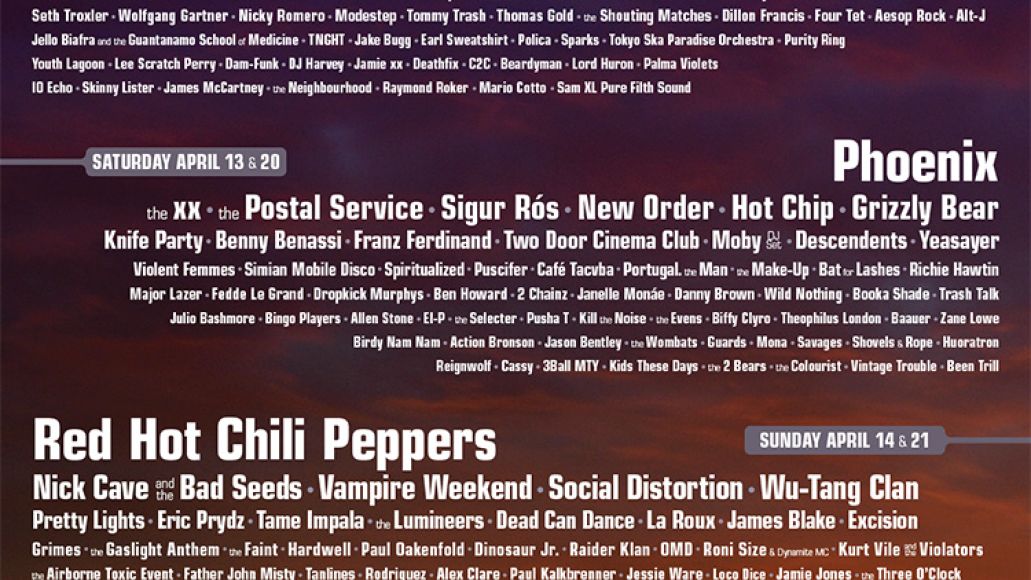 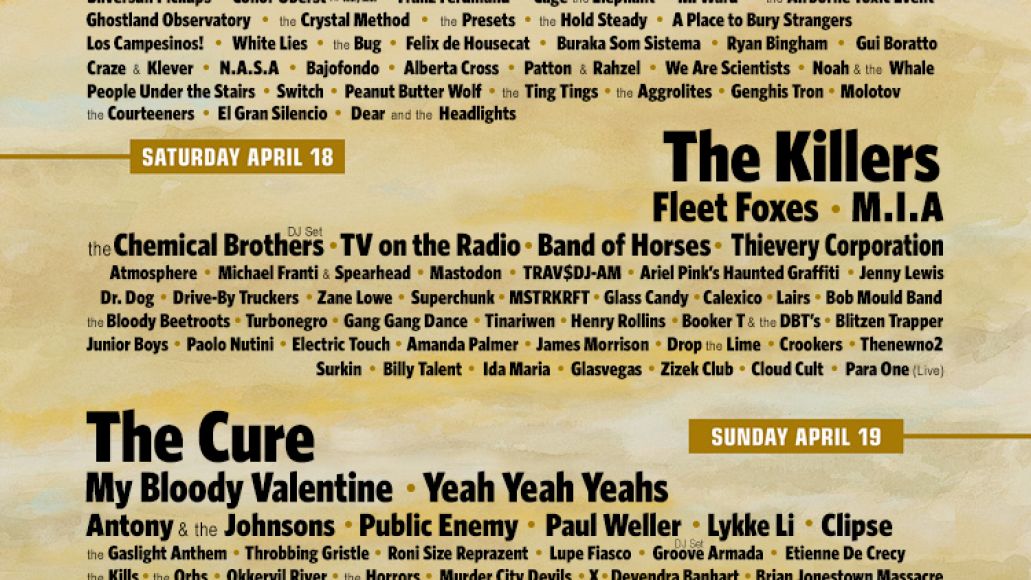 The Good: The Macca year. Since 2009, the greatest living Beatle has played a number of major music festivals, making this not as huge of a get in hindsight. But at the time, booking Paul McCartney was a huge coup for Coachella and made up for a scattershot lineup.

The Bad: While not a bad lineup through and through, the bill gets weak early on and continues. Many of the third line placements, from TV on the Radio and Band of Horses to Thievery Corporation and Beirut, just aren’t that exciting only seven years later. And the bottom two lines (four lines on a particularly rough Friday) contain a number of groups that just never hit.

Notes on the Original: This was the start of Coachella’s booking of a yearly headliner that would make fans wonder whether the band was a reach at the time. That band was the Killers in 2009, and though it is unlikely that the band will ever headline the event again, in hindsight, it doesn’t look bad either. It’s also important to remember that Amy Winehouse was originally on the lineup, but canceled when she ran into legal trouble, to be replaced by M.I.A. Hercules and the Love Affair also dropped out, which was a particular bummer because Antony would have been around to collaborate on their massive track, “Blind”. 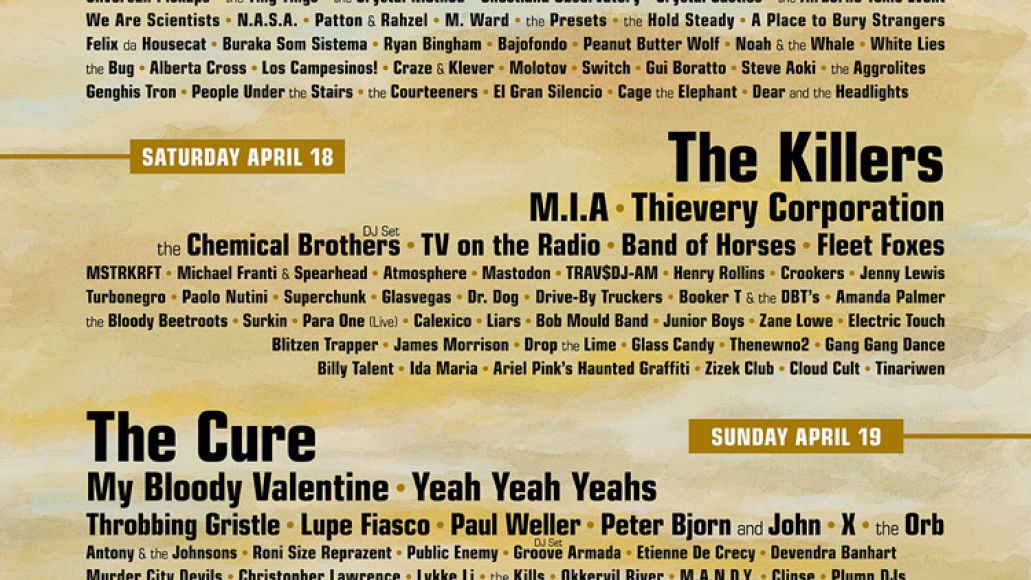 Ranking: Every Coachella Lineup from Worst to Best