There aren’t many music cues in the first three episodes of Hulu’s The Handmaid’s Tale, but the handful of song choices all illuminate a particular aspect of the narrative. First, there’s the initial episode’s end credits, which features the late Leslie Gore’s anthem “You Don’t Own Me”, the most on-the-nose of the selections, in which Gore proclaims her own independence from men, an act that shouldn’t feel as revolutionary in 2017 as it did in 1963. But the women central to the story of The Handmaid’s Tale are owned, their bodies treated like baby incubators rather than as the sentient beings that they are. The use is a reminder that, be it in the past, the dystopian future, or, most importantly, the present, women fight for equality on a daily basis.

In the Hulu series, which is based on Margarett Atwood’s 1985 novel of the same name, women are in crisis. There’s been a mysterious overthrowing of the American government, one that we’re told came on gradually, so that when they started declaring it illegal for women to own land and freezing their bank accounts, it was already too late for many of them to flee the country. We don’t exactly see how that morphs into women being forced into a form of slavery, at least not yet, but that’s exactly what’s happened to the show’s protagonist, Offred (Elisabeth Moss). We do know, however, that the new government pushes Christian fundamentalism to extreme measures, which explains the ritual of the handmaid in the first place. In the Bible, Jacob is given a handmaid by his wife Leah in order to bear him children, a verse that is literally read aloud to Offred before the ritual of her giving herself to her Commander, played by a stoic Joseph Fiennes, either consumed by guilt or pure evil. 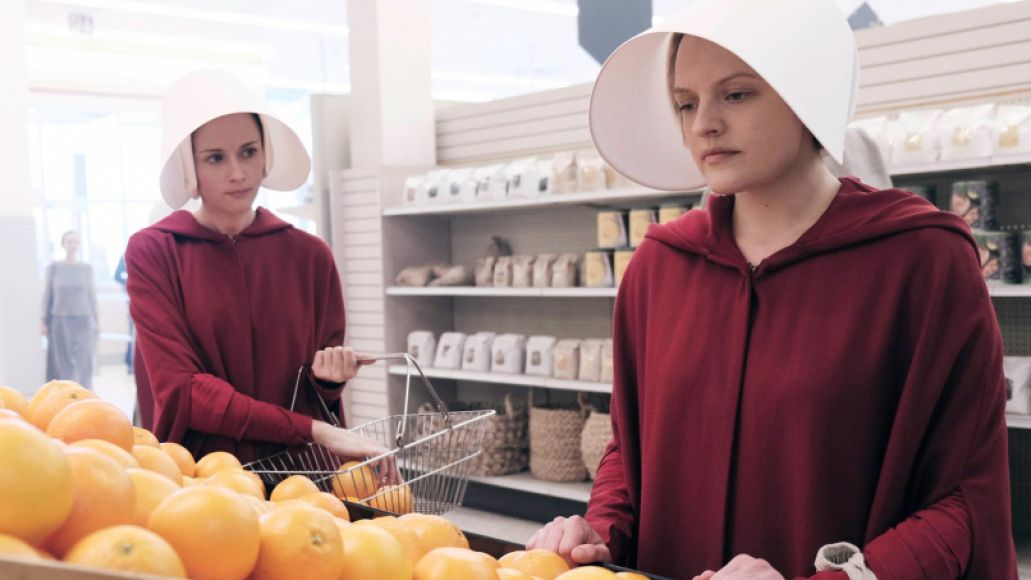 But the political ramifications of The Handmaid’s Tale are only a single aspect of what is a complicated narrative. By the end of the second episode, we get a second musical fade-out, this time to Simple Minds’ “Don’t You Forget About Me”, a light 80’s cut closely associated with The Breakfast Club and a severe tonal departure from the show. The message of the song, though, speaks toward Offred’s many conflicts. Prior to becoming a slave, she led a life of many roles. She was a student, a professional, a wife, and a mother. And as that life drifts further into the rearview mirror, there is the sense that Offred fears losing her own identity. She no longer has her given name, the baby that she conceived, or the freedom of choice. Being forgotten (or forgetting herself) would be the final blow for her character, and proof that there might not be anything worth fighting for.

This is, of course, a far cry from what is going on in the real world, but it’s not hard to see how this relates to difficulties women face in present-day America. It’s a country that has centuries’ worth of history of taking away women’s agency, particularly through its more fundamentally religious avenues. Sure, it might seem that society has moved far beyond this, but when we’re forced to march in the streets for women’s equality, the fear that we could take a major step backward in 2017 is very real.

This kind of protest surfaces in episode three and spawns another musical moment. Blondie’s “Heart of Glass” (Crabtree remix) echoes over a protest turned violent. At its core, it’s a song about loss, and it’s used to present a harrowing moment, with the remix stripping the familiar melody of all its joy. In relation to real world events, where our population has hit the streets on a weekly basis, it’s all been under the belief that it’s within our rights to stand up for ourselves. To see the on-screen women being gunned down in the street at similar protests for their own rights challenges our basic assumptions that protests are a safe place, and show how easily other rules we all accept could easily be tossed aside.

And this works both ways. Further into the series’ third episode, we also see Offred lose a part of her own humanity. When a man is brought in front of the handmaids and revealed to be a rapist, a unique form of justice comes into play, where the women are allowed to enact their own punishment. It’s shocking because there is no trial or evidence or due process. Instead, he stands accused and is promptly beaten to death by the women, with Offred leading the charge. It’s a moment where we see how this new society is changing Offred, and how she has briefly succumbed to her captors by becoming what they want her to be. It’s also a moment that prepares viewers for the horrors that are surely still to come.

Around this time, we also discover that Offred’s confidant Ofglen (played with cracked toughness by Alexis Bledel) is imprisoned and forced to watch her lover executed. What’s more, there’s increased tension between Offred and her commander’s wife (Yvonne Strahovski, balancing menace and tenderness on a needle), who’s displeased to discover a prospective pregnancy had been a false alarm. The world is spinning for our characters at a nauseating pace, making the closing credits run of Jay Reatard’s “Waiting for Something” all the more fitting. “Live with these creeps” and “oh no no no they won’t get me” ring out over rigid punk backing, pointing to the internal rebellion that’s felt by both Ofglen and Offred, but cannot be outwardly shown. Again, its tone is completely opposed to the overall look and feel of the show, but the disparity is what makes it engaging.

There might not be a television show with more ambition launching this Spring, and considering the pedigree of the material, it’s not surprising that The Handmaid’s Tale is so effective. They nabbed one of TV’s most beloved actresses of the last decade to play the lead, and are treading on topics that our last presidential election has made all the more prescient. But it’s also a story that relies on subtlety for many of its emotions. We get voice-over narration from Moss to help illuminate her character’s inner struggles, but mostly we’re left with trembling lips, shared glances, and long silences to parse out what characters are thinking when everything they feel is supposed to be internalized. It’s fitting, then, that the music choices are ambitious in their own way, using a range of genres from across eras to speak directly to the themes and character developments. By speaking through the music, The Handmaid’s Tale cracks open the window just a little further on a story that’s ready to kick right through the glass.