On May 25th, 1992, a chipper Jay Leno, prominent chin thrust forward and 1000-watt smile affixed to his face, emerged from within a set of purple curtains for his first appearance as full-time host of The Tonight Show. The fourth person to take on this role following the gold-embossed run by Steve Allen, Jack Paar, and Johnny Carson (icons all), he was well aware of the media glare that was on him when he hit his mark in the Burbank studio.

The behind-the scenes firestorm that placed the then-42-year-old on America’s TV screens at 11:35 p.m. made national news and once the smoke finally cleared in the summer of 1993, his former friend and NBC compatriot David Letterman was off to compete for the same viewers over at CBS. But as the months wore on, Leno’s every appearance was pushing him further and further away from the person he once was just as his white-knuckle grip on the spotlight got tighter and tighter. Neither he, nor late night TV talk shows, have been the same since.

As significant as the bullshit that he and his handlers shoveled out on the way to installing him behind The Tonight Show desk is, what’s potentially more important is the dramatic shift that happened within Leno on his way there. Just ask any comic or comedy fan over the age of 45 about him and they’ll still marvel about how revered he used to be as a stand up.

Well before he became the denim clad dad of NBC Entertainment, Leno was a mainstay at the Comedy Store in L.A., the famous club that helped turn Freddie Prinze and Robin Williams into sitcom superstars. The clips available of his act from the ‘70s make clear just why he was so beloved. While his material is pretty standard observational fare akin to his buddy Jerry Seinfeld, there’s an undeniable swagger to it all. It borders on cocky but never quite gets that extreme. You lean into his jokes even if you see the punchlines coming from a mile off. According to Bill Carter’s 1994 book The Late Shift, which chronicled the battle for Carson’s throne, even his future on-air rival Letterman “was so impressed by Leno’s ability as a stand-up that he told himself he ought to go back to Indianapolis, ‘because he was doing it the way I wanted to, and I thought I’d probably never do it as well.’”

Network executives saw exactly the same thing. That led to multiple appearances as a guest on The Tonight Show and multiple small parts on sitcoms and films. He was being groomed for bigger things. Perhaps the strangest wrinkle of the story is that it was, in part, Letterman who helped abet Leno’s career in television. As Late Night with David Letterman was finding its feet after its debut in February of 1982, Leno came along to do standup and engage in some friendly banter with the host. It went so well that, every six to eight weeks for the next few years, he would pop over to Late Night and have some fun.

With that leverage, Leno’s notoriously ball-busting manager Helen Kushnick worked the phones and got her client a dream job as one of the substitute hosts for The Tonight Show. Already a favorite of Carson’s, it seemed like a natural fit even if he was a little visibly unsure of himself whenever he sat behind that famous desk. And the network was beyond pleased as he also brought with him a younger demographic of viewers. So with other guest host Garry Shandling bowing out to concentrate his efforts on his Showtime series It’s Garry Shandling’s Show, NBC gleefully announced at a big network event at Carnegie Hall in 1991 that Leno would have the job permanently. What then head of programming Warren Littlefield didn’t anticipate was that shortly afterward, Carson would let the world know that he would be retiring from The Tonight Show next May. 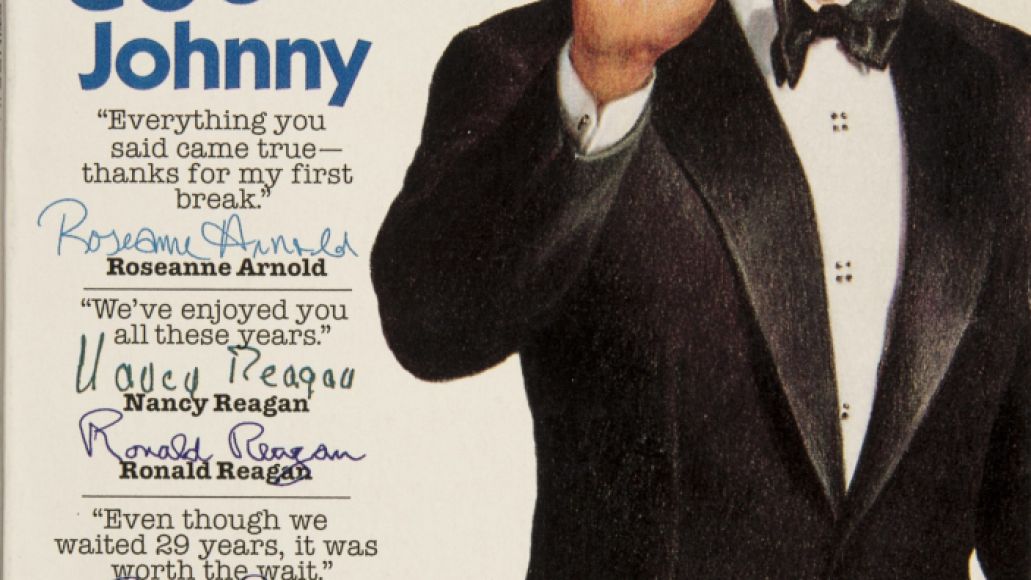 The shit storm that ensued has been well documented in Carter’s book and beyond, and isn’t worth rehashing in detail here. The most important detail to take away from it all, though, is how the bigger paychecks and larger exposure turned Leno into a simpering company man. And that’s evident from the second that announcer Ed Hall says, “And now…Jaaaayyyy Leno!”

The edges of his standup persona had already been mostly sanded away, but this first episode was the final buff and polish job. He’s gregarious and engaging, yet every bit is toothless and self-satisfied. He mocks Vice President Dan Quayle, tells a strange joke that uses the L.A. riots as a punchline, and shares the first of a million funnies about the sexual proclivities of then-presidential candidate Bill Clinton.

By the time he gets behind the desk, it’s clear that, even though his name is in the title of the show, he was still trying to live up to the legacy of the man he replaced. Even the appearance of Billy Crystal, a fellow Comedy Store vet and a buddy of Leno’s, as the first guest wasn’t enough to ease his discomfort. Things only got worse when he attempted small talk with the musical guest Shanice and tried to follow along with the simplified discussion of economic policy by CBS correspondent Robert Krulwich (not exactly a murderers’ row of talent for Leno’s first night on air). Leno looks physically relieved when the hour comes to a close and he’s able to announce his guests for the next show.

And so began over two decades worth of strained mediocrity with thousands upon thousands of obtuse jokes told and an equal amount of plodding conversations with famous people from around the world. Small flare ups would arise like his softball grilling of post-blowjob arrest Hugh Grant or Howard Stern being Howard Stern, or promotional stunts like swapping places for a day with Today Show co-host Katie Couric or filming an episode lit only by candles. Beyond that, it was a quick slide into a kind of cultural irrelevance that was post-nightly news comfort food for the Baby Boomer generation. 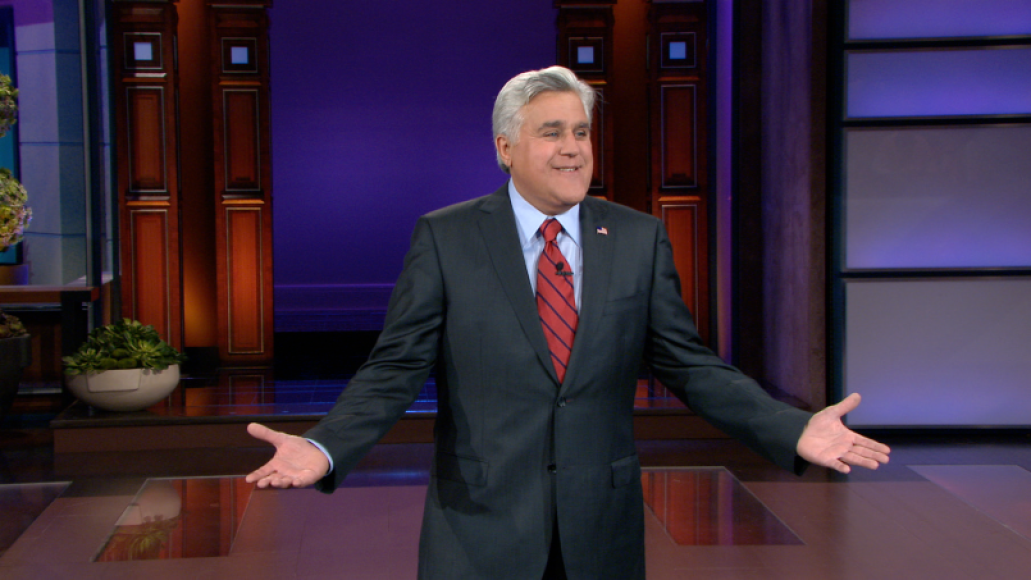 That’s why Leno remained king of the ratings mountain for nearly his entire tenure as Tonight Show host: he was the safe choice. He pandered and strove for the easy laugh. But most importantly, he never made himself look like the buffoon in any of the comedy segments that appeared in any of the 4,600 episodes of the show that aired. Every other late night host—even his cartoonish replacement Jimmy Fallon, who has turned the show into a clubhouse for the pop culture pep squad—gladly threw themselves under the bus on the regular. Once Leno realized he had a brand, a reputation, and an airplane hangar full of cars to protect, he wasn’t going to take any chances.

All of his contemporaries proved just how bland the easy road was in the long run. Letterman tamped down his surrealist aesthetic for CBS audiences, but also dared to expose his frailty and fallibility. Conan O’Brien and his murderer’s row of writers (including Louis C.K., Robert Smigel, and Bob Odenkirk) brought real comedic daring to the scene. The Comedy Central crowd highlighted political hypocrisy and challenged the intellect of its audience. Arsenio Hall proved daring in his bookings, with everyone from Louis Farrakhan to Bill Clinton showing up during his show’s initial run.

Think of this way: If you had the choice of checking out a re-run of any of the above shows, which would you choose? There was no there there and there never really was. All of the folks that have wandered into the late-night talk show field in Leno’s wake keep proving that, night after night. The current crop, which spans the TV universe from ABC (Jimmy Kimmel) to Netflix (Chelsea Handler) and beyond (Chris Gethard, whose wooly and weird talk show returns soon on TruTV), have an infinite amount of entertainment options to compete with and they’re stepping up their collective games as a result. As for Leno, he’ll be in his garage, chuckling to himself as he writes another Monica Lewinsky joke in his mind, and slowly fading away.