From day one, the Trump administration has attempted to curtail First Amendment rights (Fake News!) and access to affordable healthcare, making the ACLU and Planned Parenthood more vital than ever. Today, Death Cab for Cutie and The Decemberists joined the long line of musicians who’ve shown support by announcing a benefit show with all proceeds going directly to the two organizations.

Billed as an “acoustic evening,” the concert will take place on June 9th at Seattle’s The Paramount, with singer-songwriter Sera Cahoone joining the two bands on stage. Tickets go on sale Friday, May 12th at 10 a.m. PST and will be available for purchase here.

“We as Death Cab For Cutie are appalled by the divisive, xenophobic and misogynistic agenda the Trump Administration is attempting to implement in our country,” said Death Cab for Cutie’s Benjamin Gibbard. “We are proud to be joining our friends The Decemberists and Sera Cahoone in support of both the ACLU and Planned Parenthood at this pivotal time in our nation’s history.”

Echoing Gibbard’s thoughts, The Decemberists’ Colin Meloy added, “There are enough stories from this last week alone — the Trump administration’s attempts to curtail first amendment protections and the GOP’s passage of the heartless AHCA — to remind us that organizations like Planned Parenthood and the ACLU need our support now more than ever. We Decemberists are proud to do our bit to help those orgs stay funded and active in their communities, both local and nationwide. RESIST!”

This isn’t the first time Death Cab has taken Trump to task. Previously, they burned him with “Million Dollar Loan”, a song they contributed to the 30 Days, 30 Songs anti-Trump compilation. The indie rock band’s latest album was 2015’s Kintsugi. Currently, The Decemberists are on tour, where they’ve been road-testing new songs including “Traveling On”, presumably for their follow-up to 2015’s What A Terrible World, What a Beautiful World. 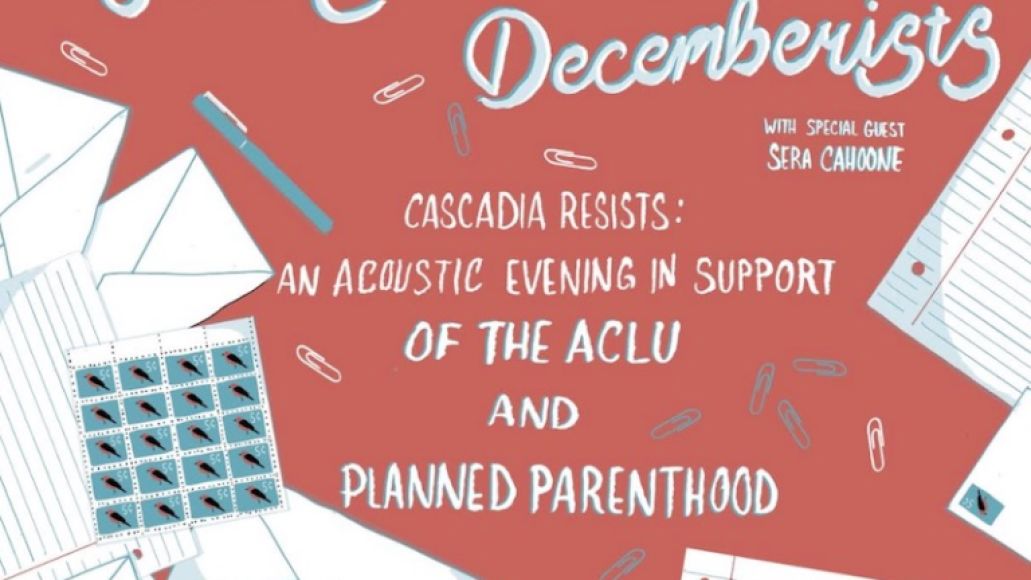