This morning, Sony/MRC finally dropped the first trailer for their forthcoming adaptation of Stephen King’s highly coveted series, and with it came a sense of relief. For starters, there wasn’t a shitty cover of The Who’s “Behind Blue Eyes”, which was all over the leaked trailer that surfaced last October, but more importantly, it doesn’t look awful.

Despite our on-going reservations — and let’s be real, we have all the reason to be worried given the delays, reshoots, fringe marketing, and four goddamn screenwriters attached to the project (leading the pack, of course, is Winter’s Tale mastermind Akiva Goldsman) — there’s actually a lot to love about this two-and-half-minute trailer.

Idris Elba looks perfect for the role as Roland Deschain, Matthew McConaughey isn’t exactly chewing up the screen as initial reports at CinemaCon suggested, and the locations are inspired enough to take us out of our dreary reality. On the other hand, the adrenalized action and YA overtones have us biting our fingernails aplenty.

Ahead, you’ll find five key takeaways from various members of The Losers’ Club, Consequence of Sound‘s own Stephen King podcast. In light of the short time frame, we tried to be as expansive as possible, but for a deeper dive, tune into tomorrow’s episode, where we’ll be chatting about the trailer in full with even more thoughts.

We’ve long hoped for a Stephen King cinematic universe, something akin to how Marvel has brought their iconic comics to the silver screen over the last decade. Well, that may actually be happening, though hardly on the level that Kevin Feige has accomplished with the Mouse House. Based on the trailer and a previous behind-the-scenes production still, it would appear that there are, indeed, nods to King’s other works, namely The Shining (the exterior for The Overlook Hotel used in Stanley Kubrick’s 1980 adaptation can be seen in a photo), It (Jake comes across the dilapidated remains of Pennywise’s Circus) and ‘Salem’s Lot (a store sign reads Barlow and Straker).

Given that The Dark Tower series is one large tome of pop culture references, from Dr. Doom to Harry Potter to The Beatles and beyond, these little Easter eggs bode well for the scope of this cinematic world. But, it also raises a number of questions, specifically: Are these just token additions? Or do they have further implications on the characters? How does Sony include this stuff in the series without having the rights? What other properties does Sony have at their disposal to use?

Based on nothing more than our own assumptions, we’d wager to bet that these are simply wink-wink references, all in passing with no real weight on the story, and that Sony got away with using them by not being too specific. Okay, that’s fine, whatever works to make this feel like a lived-in King’s Dominion. However, what about the properties Sony does have at their disposal? That’s the question nobody seems to be asking right now, so we took a little dive and came out with a few goodies. 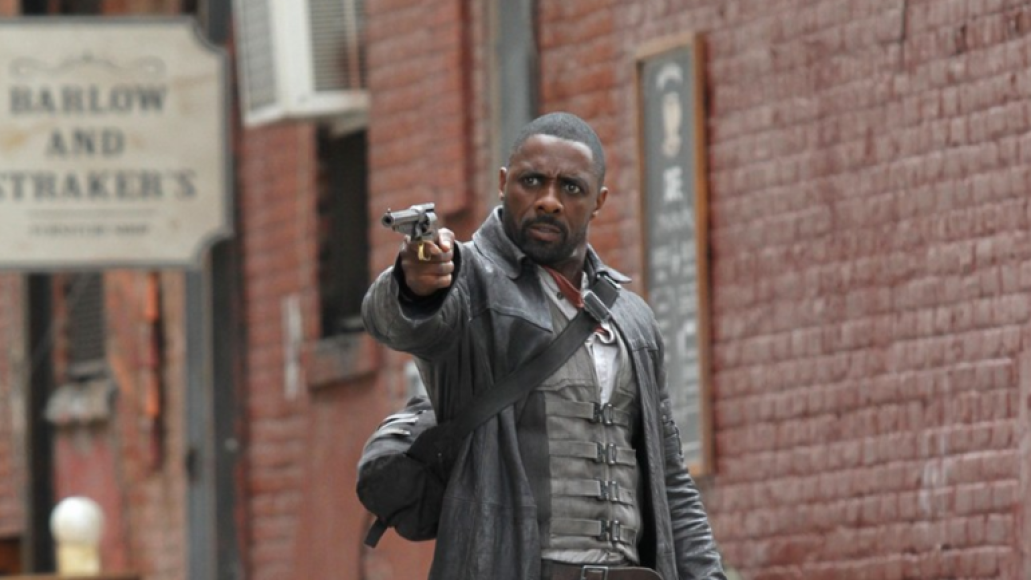 Now, that’s not too shabby of a list, but the troubling thing is how many essential properties they don’t have under their banner. In fact, it’s outstanding how many actually belong to Warner Bros., who currently preside over stuff like ‘Salem’s Lot, It, The Stand, The Shining, and Hearts in Atlantis. Basically, if fans are looking to see signature worlds and characters from these tales — ahem, Father Callahan comes to mind — then there are going to have to be some serious meetings in the near future. Given that Sony played nice and shared Spider-Man with Marvel, there is admittedly a sliver of hope.

There Are Other Worlds Than These

They are pushing (pun absolutely intended) some events of The Drawing of the Three into this film with the whole “A Gunslinger in New York” vibe we’re getting, complete with Roland looking about the city that never sleeps with wonder. Maybe I should have used “Roland Takes Manhattan” instead of a dated Sting reference, but hear me, I beg: the gunslinger is here and I don’t think he’s looking for “astin”.

Roland and Jake’s Mid-World travels take us upon the familiar terrains of both desert and mountains. The double sun indicates that perhaps this film shares the same universe as Star Wars, though I’ve been known to make superior jokes. Unfortunately, it’s a strange filmmaking decision that only compares this film to ones that came before. Not exactly a surefire way to create a new, long-lasting franchise, but what about this production has given anyone much confidence?

Mid-World and New York were expected, but what we find within may be a whole other story. Is the attack of the Low Men/Taheen on the burning village a flashback of Gilead’s fall? We meet King Steven Deschain in the trailer, so we can assume that some action will be taking place in Roland’s childhood home. Another possibility is that it’s part of the attack on what appears to be Tull at the end of the trailer. If the filmmakers really wanted to push everything forward, then maybe it’s Lud. That’s a real possibility if that is indeed our ol’ pal Gasher attempting to kidnap Jake. Don’t get me started on wherever the aforementioned “Pennywise” land is. Are we getting sneak peaks into a bunch of different where’s and when’s?

A lot of questions, but one thing’s for sure: There are other worlds than these. Let’s hope our initial visits to give us the chance to see some more in the future.

First things first: Who was Steven Deschain and why does he matter? Well, he was Roland’s father, for one, a Gunslinger of old who served as “dinh” (leader, essentially) of Roland’s native city of Gilead. His presence is not simply one of mentorship, however; rather, Steven’s story is directly tied into that of Roland’s blood feud with the Man in Black. For, you see, the Man in Black manifested in the life of Steven as a wizard by the name of Marten Broadclock, a man who cuckolded Steven by sleeping with his wife, Gabrielle. This action led to a chain of events that resulted, tragically, in Roland’s murder of his own mother and the collapse of Steven and Roland’s relationship. Whew. Okay.

It’s doubtful we’ll get all that here—Steven’s story could be a movie all its own—but Steven’s presence in the trailer (portrayed by the great Dennis Haysbert) proves that he’ll serve some kind of pivotal role. For one, a glimpse into Roland’s past should offer context on how the Gunslingers functioned before they were wiped out. Secondly, as Justin noted, the site of a burning village set upon by Low Men/Taheen could very well be a vision of Gilead’s fall, a piece of information that should help bring pathos and depth to Roland’s character. It is curious, however, that it’s Elba, not a younger actor, that’s engaging with his father—Roland was a teenager back then and Idris Elba is, well, Idris Elba—so there remains the disappointing possibility that Steven appears to Roland only in dreams or visions or something equally lame, where he’ll spout a few cocktail words to light a fire under his son’s ass.

Regardless, one thing’s for certain: Roland has not forgotten the face of his father.

King is best when writing creepy creatures, and it’s nice to see we won’t have to wait very long for some of these to bleed into The Dark Tower films. So far, the most present and fleshed out creatures are that of the Cantoi or Low Men. These strange beings are vaguely reminiscent of humans yet have bird and rat-like features. Though they’re minions of the Crimson King (who has yet to be seen), they look to be under the control of The Dark Man at this juncture in the story.

Though, we also get a taste of what may be the Oracle, a mystical demon that haunts the woods in The Gunslinger. This contact leads to a pinnacle event in the series, so we’re pretty interested to see whether or not the same choices are made by Roland in order to thwart this attack on Jake. It also looks like the Oracle is going to be much more aggressive and frightening than described in the book.

And last, it would appear that we’ll see the Dutch Hill Mansion, which Jake enter to face the demon inside and return to Mid-World. (That has to be the floorboards coming up, no?) Without Eddie Dean to carve out the key, it’ll be interesting to see how he opens the door, and whether or not it’ll be his return or his first time traveling.

One glaring problem is how information feels so streamlined. In the book, the characters are constantly trying to figure out why they are where they are, what they’re supposed to be doing, who they’re supposed to be chasing, etc. Even Roland — the protagonist throughout the whole series — doesn’t know who exactly The Man In Black is until way down the line. There’s a sense of hypnotic amnesia in the novels; of a world where time and space collide to the point where you can forget who you are.

There seems to be no such mystery in the trailer. Roland explains to Jake exactly who The Man In Black is. Even more telling, they’re fully aware of the Tower’s purpose and why they need to save it. In some ways, it makes sense for the reveal of information to be more streamlined and straightforward than in the novels. If Lost taught us anything, it’s that withholding the explanation of a story’s central gimmick can grow exhausting over time. So maybe the film’s trying to get the main idea out of the way so it can focus on action centerpieces and the exploration of New York/Mid World.

That being said, the seemingly cut-and-dry nature of everything raises some tonal concerns. One of the best things about The Dark Tower series is its sense of Impressionism — how King gives you just enough information to keep you turning the page, but not so much that you figure out everything before the characters do. Part of the joy is getting lost in the otherworldly landscape. Roland is wandering aimlessly through the desert, and for a time, so are you. The amount of space allows for narrative and thematic complexity.

Here, though (again, we’re just going off of the trailer), The Dark Tower is being set up as a very linear story about good versus evil. The trailer makes sure to tell us that Roland’s the good guy and he must stop the bad guy from reaching the Tower and destroying all of existence. But, where’s the fun in that? –Dan Caffrey