Over the past five decades, the Grateful Dead have given birth to a unique and instantly identifiable subculture. How many musicians can say the same? Garbed in flowing tie-dyed T-shirts and shawls, the Deadhead army patrols our nation’s grassy knolls and head shops, spreading mellow vibes and pungent aromas. Their internet archive makes available nearly 9,000 (!) past performances for your immediate enjoyment, and the term “Deadhead” is even in the Oxford English Dictionary. 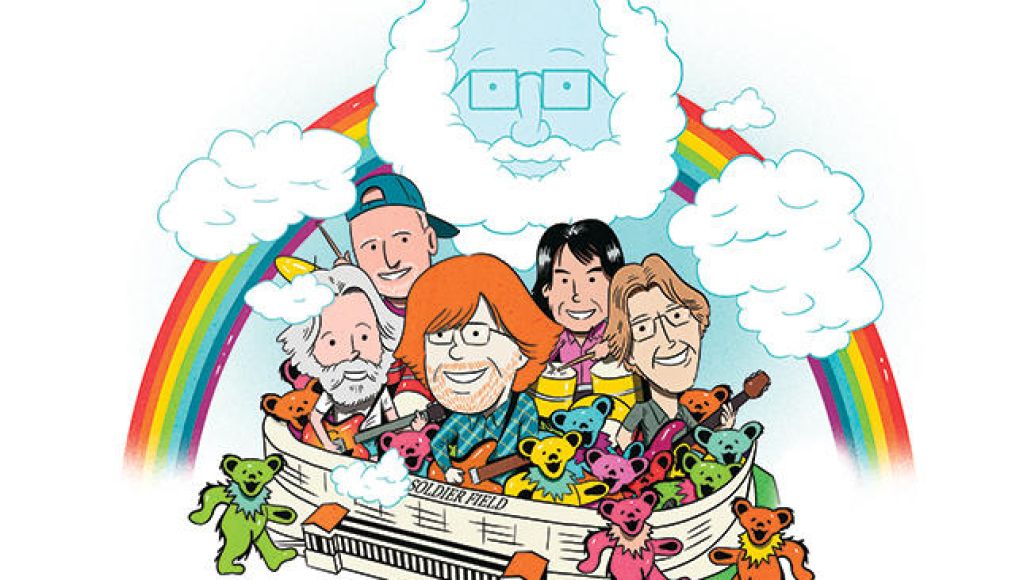 Perhaps it’s precisely because of the mass cultural movement surrounding the Grateful Dead that the band’s musical significance sometimes gets overlooked. It’s easy to dismiss The Dead as a bunch of stoned-out Flower Power hippies whose contributions are more social than musical, but that would be a huge mistake.

Abstracting more than 30 years of brilliance into less than a dozen songs is a fool’s errand. But even thousand-mile journeys begin with a single step, so here’s 10 tracks to usher you across the River Styx and into the land of The Dead.

Sandwiched between references to an iconoclastic comic strip (“Krazy Kat peeking through a lace bandanna”), Leo da Vinci (“crying Leonardo’s words”), and the Buddhist concept of supernal understanding (“copper-dome Bodhi”), “China Cat Sunflower” has Jerry Garcia laying in some of the crispest, sweetest riffs ever concocted. Paired perfectly with his lazy vocal drawl, he channels the calming sense of wellbeing one enjoys while gazing up at an unblemished blue sky or contemplating the cadence of golden straw blowing in the breeze. Anchored by a sublime, naturalistic euphoria straight out of a Wordsworth poem, it’s a hedonistic tune that’s wholly preoccupied with the naked enjoyment of taking in those warming, healing sunbeams. As the track unfolds, life’s worries fade away, gently nudged into the background by Garcia’s rollicking licks, Bob Weir’s steady rhythm guitar, and Phil Lesh’s bobbing bass. Performed at over 500 live shows alongside its companion piece, “I Know You Rider”, The Dead typically tapped “China Cat Sunflower” to kick off their second set. Here, beneath the blazing Oregon summer sun, topless longhairs sway to the beat as they bronze their shoulders and flirt with heatstroke. —Henry Hauser

Night at the Improv

Some songs just aren’t meant to be confined to the contours of a record. Take “Dark Star”, the quintessential springboard for countless improvisational jams. Initially released as a single back in ‘68, the track “sank like a stone,” selling just 500 copies. But while the single ran for a paltry 2:40, it wasn’t uncommon for live renditions to clock in at 30 minutes or more.

With this added space, the Dead incorporated elements of free-form jazz, psychedelic rock, and some seriously heady Garcia guitar solos. After leaning heavily on “Dark Star” throughout the late ’60s and early ’70s, the song became a rarity at Dead shows, with Deadheads referring to the lengthy track as their Holy Grail or, more simply, “IT.” At 22 minutes, their 2/27/69 Fillmore West performance isn’t even close to the longest version of “Dark Star” (that honor belongs to the 48-minute Rotterdam rendition), but it achieves a perfect fusion of spontaneity, experimentation, and transcendence without sliding down the slippery slope of of excess. Lesh’s bass lines are pure jazz, while Jerry sounds focused and engaged as he whispers Hunter’s trippy lyrics, “Mirror shatters/ In formless reflections of matter.” –Henry Hauser

The Grateful Dead’s legacy is build on the bedrock of their legendary live performances, but it would be remiss to ignore their studio output. With over a dozen studio LPs, the Dead scored five Gold and five Platinum certifications between ‘69 and ‘89, showcasing a tighter, more refined side of the band. 1970’s Workingman’s Dead, their first to go platinum, featured some of the Dead’s most popular and polished tunes, including closing cut “Casey Jones”. Co-written by Robert Hunter (lyrics) and Jerry Garcia (music), the chill county-rock ditty chronicles a strung-out train conductor speeding down the wrong track at 102 MPH. Yet, despite the foreboding “trouble ahead/ trouble behind,” the band seems blithe and carefree. Jerry sounds downright drowsy, while the rest of the band plays slow and steady. This nonchalance in the face of certain death (“Come round the bend/ You know it’s the end”) is the epitome of ‘60s mellow. The world could be crumbling before our eyes, but there’s no reason to get all uptight about it. And the Dead certainly practiced what they preached. Altamont, Nixon, Nam, thieving managers, you name it: The Grateful Dead weathered the storms of the ’60s and ’70s without becoming bitter or violent. Nothing could kill their buzz. —Henry Hauser

Not Quite Christian Rock

At first glance, Saint Stephen, the first martyr of Christianity, might seem like an an odd subject for a Grateful Dead song. But dig a little deeper, and sure enough, there’s a connection. Stephen was stoned to death, while the Grateful Dead (and their fans) were mostly stoned in life. During the Dead’s iconic Cornell University show, the band interspersed “St. Stephen” with Buddy Holly’s “Not Fade Away”, segueing seamlessly between the two disparate cuts. It’s an unorthodox coupling of psychedelic folk and rockabilly, but it works just as well as sea salt and dark chocolate. Right from Garcia’s opening riff, delighted Deadheads hoot and holler. Even the bootleg recording revealed a palpable connection between audience and artist. The mid-song jam has the band firing on all cylinders, playing fast, taking risks, and pushing each other’s limits. In a 2013 New York Times poll, the Cornell gig was voted greatest of all Grateful Dead shows, thanks in no small part to this sensational suite. –Henry Hauser

Love in the Time of Psychedelia

What is love in a world where nothing is as it seems? “Scarlet Begonias” begins with a minute observation familiar to all: a romantic vision at the edges of perception. As the song progresses, the narrator navigates questions of illusion and idealized romanticism. When the song concludes, the scope has expanded to include the universe, and one final truth is shared: “Everybody’s playing in the Heart of Gold band.”

It’s a journey that has warmed the hearts and, no doubt, soundtracked the highs and lows of love for countless Grateful Dead fans. “Scarlet Begonias” debuted in 1974 and subsequently appeared on Mars Hotel. In live performance, it was often paired with “Fire on the Mountain”, forming an often 30-plus-minute run of the Dead at their finest. “Begonias” stands as a fan favorite and essential part of the band’s catalog for its unique combination of uptempo swing and easy to sing (and love) lyrics that echo universal sentiment, but remain vague enough to let every listener develop a personal connection. The ultimate message suggests that we can’t lament lost opportunities, but instead celebrate the potential around us every day. Hell, the song says it best: “It seldom turns out the way it does in the song/ Once in a while you get shown the light/ In the strangest of places if you look at it right.” —Kris Lenz