Come 2018, the Detroit Pistons and Red Wings will have new homes near downtown Detroit. The construction is actually not that far removed from Hart Plaza — the home for Movement Electronic Music Festival over the last 11 years. Judging by main stage attendance, new partnerships (like the Rick & Morty bus), and response to unfortunate weather situations, there should be no reason for Movement to vacate the multi-layer waterfront footprint anytime soon.

Wisely, Paxahau Productions have found new ways to expand the intimate facilities. Now justifiably dubbed the Pyramid Stage, the most lavish of the stages has been extended to contain a VIP area in efforts to free up space for general admission attendees.

While it might seem a bit odd that the long-time Made In Detroit Stage now carries the Stargate (presented by Thump) tag, it’s hard to argue about branded platforms when this partnership only allows for more regional tastemakers to be featured during the extended Memorial Day weekend. (A smaller local stage now exists for those chosen talents.) 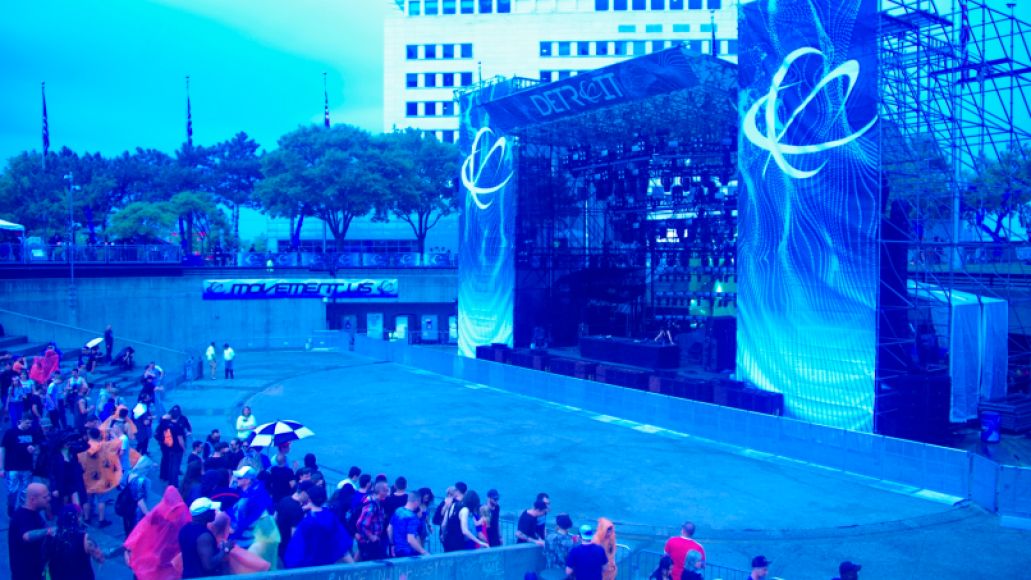 A seemingly permanent fixture within the festival, the Red Bull Music Academy has truly nurtured a festival-within-a festival during the entirety of Detroit techno week. While legends like Larry Heard would have undoubtedly made their way into the bill, it’s hard to imagine The Gaslamp Killer or TT the Artist on the lineups without the relationship.

Dirtybird is also an unmistakable force at Movement. Not only do their artists show up for unannounced parties (j.phlip in the VIP area on Monday for her birthday), they also run out of merch and have to tweet mid-festival concerning updated quantities. Unfortunately, the mau5trap label couldn’t shine during the event. Due to Sunday’s heavy storms, Joel Zimmerman’s Testpilot set was negatively impacted by several technical issues. Graciously, the outspoken producer apologized on social media for the “bullshit” performance.

No hard feelings. Below is just a fraction of the soggy weekend’s highlights… 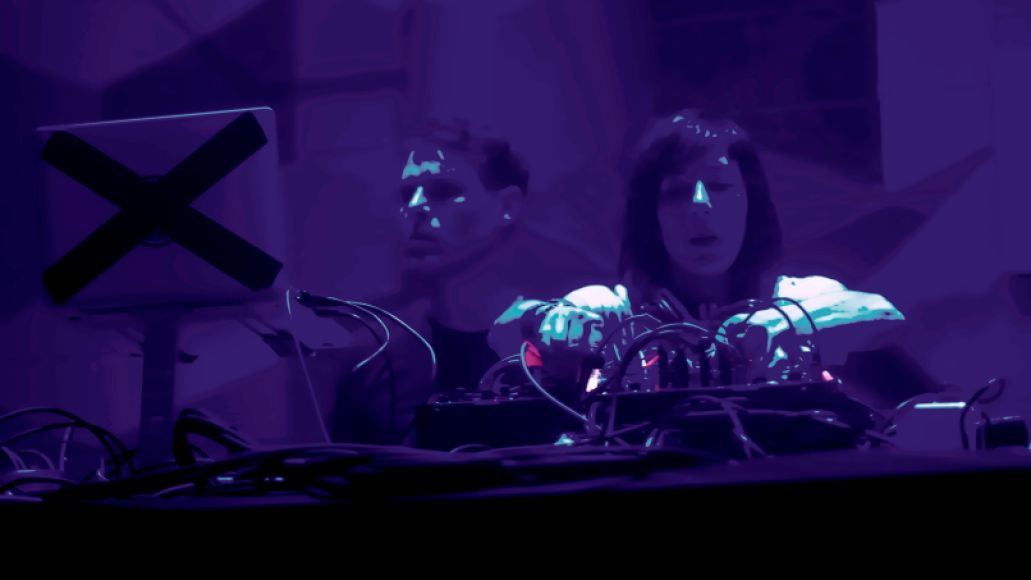 Orphyx is Canadian duo Rich Oddie and Christina Sealey. In addition to her live production duties, Sealey is a college professor and co-founder of electronic music workshop The Loop for young girls, and the duo’s live set encompasses a similar spirit of innovation and inspiration. On Sunday, the Underground Stage saw a slower flood of revelers leading to the mid-point of the pair’s 90-minute live showcase. As the morning’s clear skies shifted to ominous grey clouds, Orphyx’s experimental industrial and dub-techno enticed an abundance of bodies into the stage’s cover. Once there, Orphyx’s penetrating low end kept fans planted through Sunday’s late-afternoon thunderstorms and equally incendiary sets courtesy of Ryan Elliott and Sleeparchive. 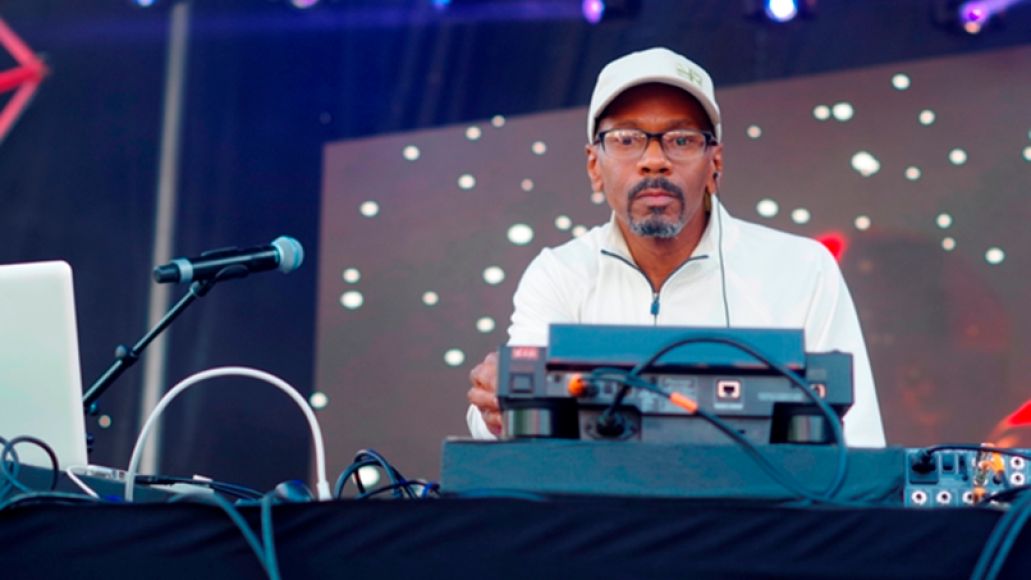 A pioneer of deep house, Larry Heard heralded a soulful aesthetic 30 years ago that just recently hit a new international peak; however, it’s unlikely that even 5% of EDM crowds could identify the Chicago legend. Those who chose to imbibe in Mr. Fingers classics over mid-day sets by Josh Wink, Octave One, and the masked Headless Horseman were rewarded with an extended appearance by Mr. White. The face might not have been familiar to all, but when the acid-kissed bliss of “The Sun Can’t Compare” hit the speakers, that serene vocal was unmistakable. Heard’s sampling of soul, disco, plus acid- and jackin’- house noted the shift in deep house over the decades. All the dancers and singers grooving to Heard and Mr. White will let that debate continue in the digital realms. 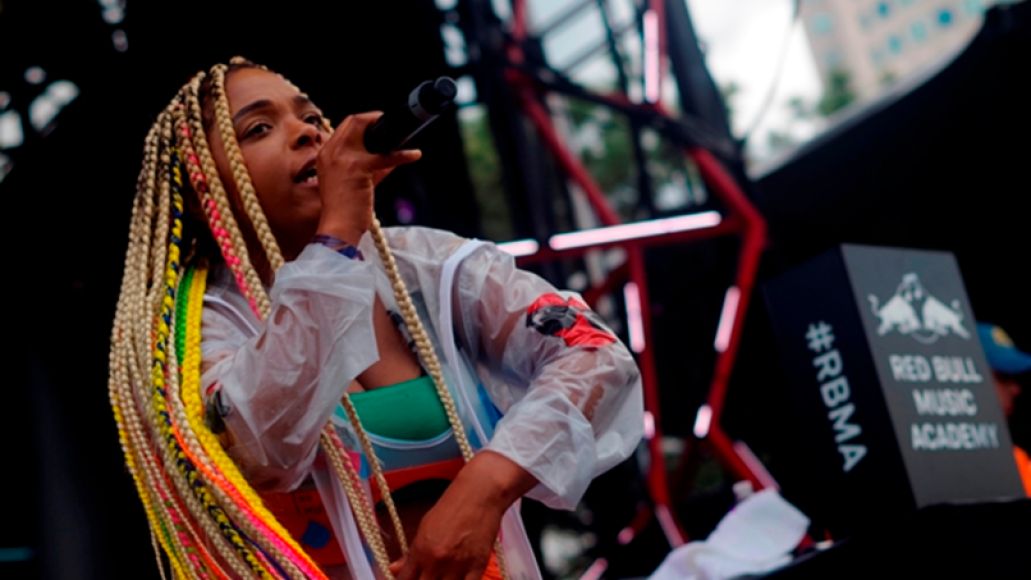 Taking to the Red Bull Music Academy Stage around 2 p.m. on Memorial Day, the debut performance of TT the Artist saw her Detroit crowd grow from about a dozen folks to nearly 100 at the conclusion of the 90-minute set. The timeframe allowed the Baltimore-based rapper/singer/producer to work through most of her current repertoire including “Pussy Ate”, “Make It Bang”, and “Lavish”. She even found a moment, while catching her breath between cuts, to shout out Insecure star Issa Rae, who included TT in the show’s mixtape. As a D.C.-metro resident, TT also showcased a fondness for moombahton mayhem, stretching her set with those island bass beats. 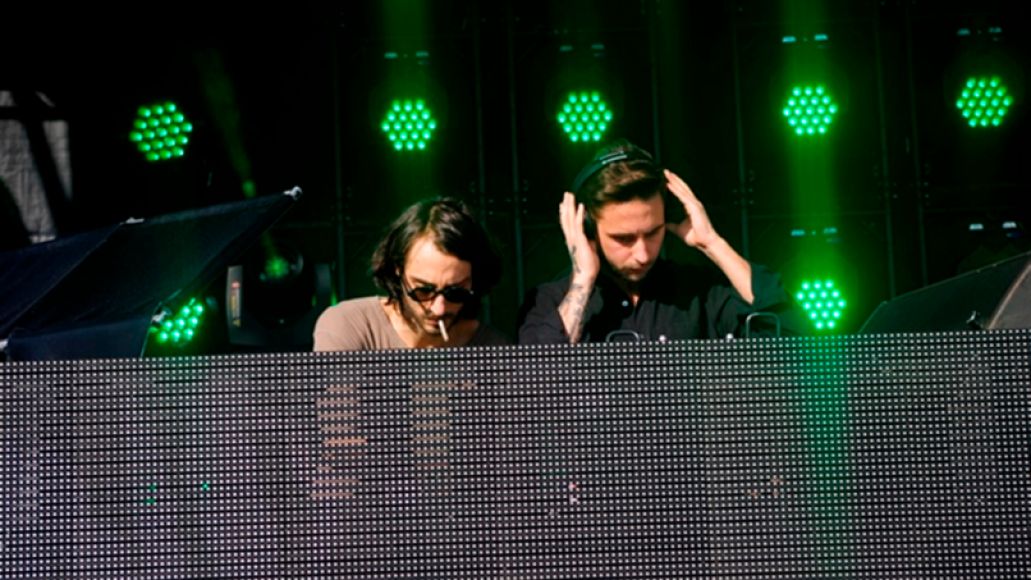 Regulars across the German and Spanish underground, Memorial Day marked the debut Detroit performance of Mind Against. From Berlin by way of Italy, Alessandro and Federico Fognini transfix European crowds with their fusion of IDM and psychedelic techno. That hypnotizing blend isn’t usually best reserved for mid-day on a Monday, but the afternoon’s building rain clouds helped cast a more appropriate setting for the aesthetic. 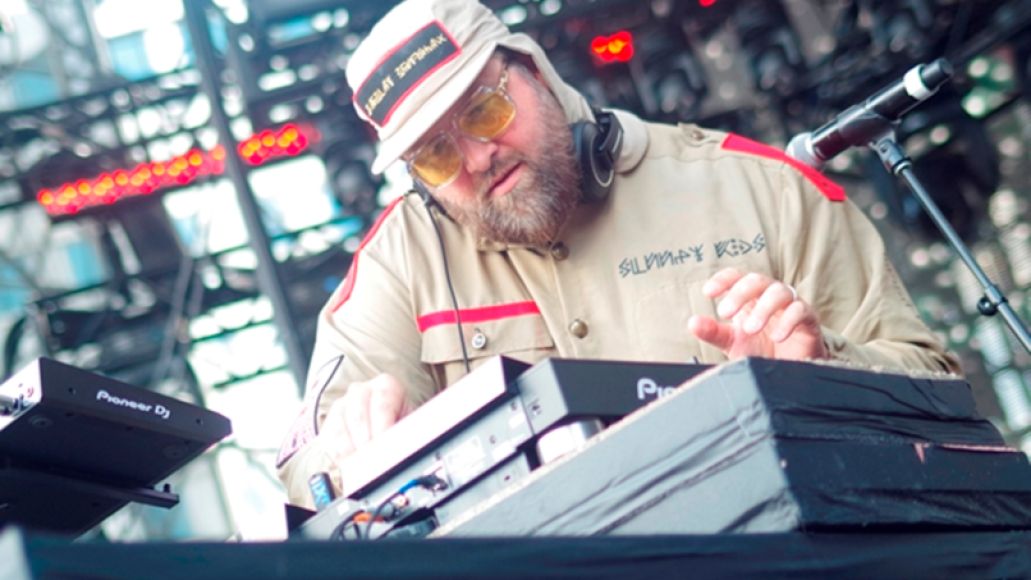 “I’m from here, but this is the first time I am playing under my real name,” Barclay Crenshaw (aka Claude VonStroke) clarified while hitting the festival’s main stage. Clad in a branded Safari outfit, Crenshaw served as captain on this voyage through odd beats, jarring basslines, and his take on soundsystem culture. As the co-founder of Dirtybird, Crenshaw has heard that label’s booty-bass/bassline sound emulated by dozens of labels, the updated “alias” extends the maestro new freedoms across the decks. The course of direction wasn’t too far removed from Claude VonStroke festival sets, the DJ even finding room for an “Ass-N-Titties” remix. Looking out at the sea of bouncing dB hats, the crowd was eager to indulge Crenshaw’s new assortment of material. Considering how Movement has become more or less a family reunion for electronic artists, a local boy like Crenshaw has all the room he needs for experimentation. 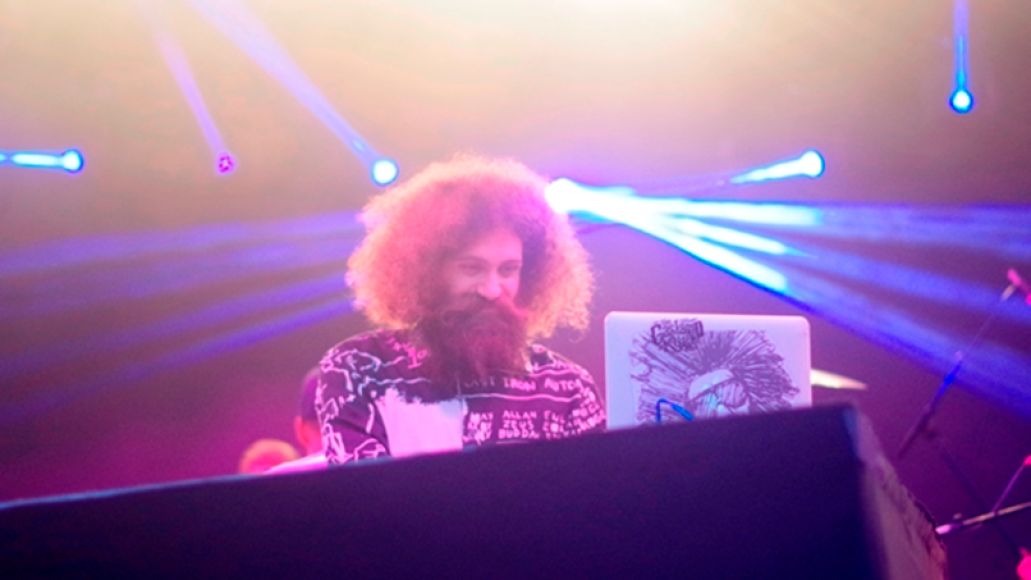 Low End Theory’s The Gaslamp Killer loves him some Kendrick Lamar. Within the first half of his set, the San Diego native rinsed three cuts from the Compton wordsmith, including recent single, “Humble”. Not wanting to disrespect the local hip-hop heads, GLK also insisted that Detroit and ATL were keeping the current rap game strong (foreshadowing that night’s headlining set courtesy of Danny Brown). Although a generation removed, The Gaslamp Killer and electronic icon Josh Wink’s track selections have much in common. It’s unlikely you’ll find the same tracks within their individual mixes; however, each has developed a balance of easily-digestible remixes and possible dancefloor clearers. Should a few less bodies desert the floor during that final absurd edit, everyone wins! 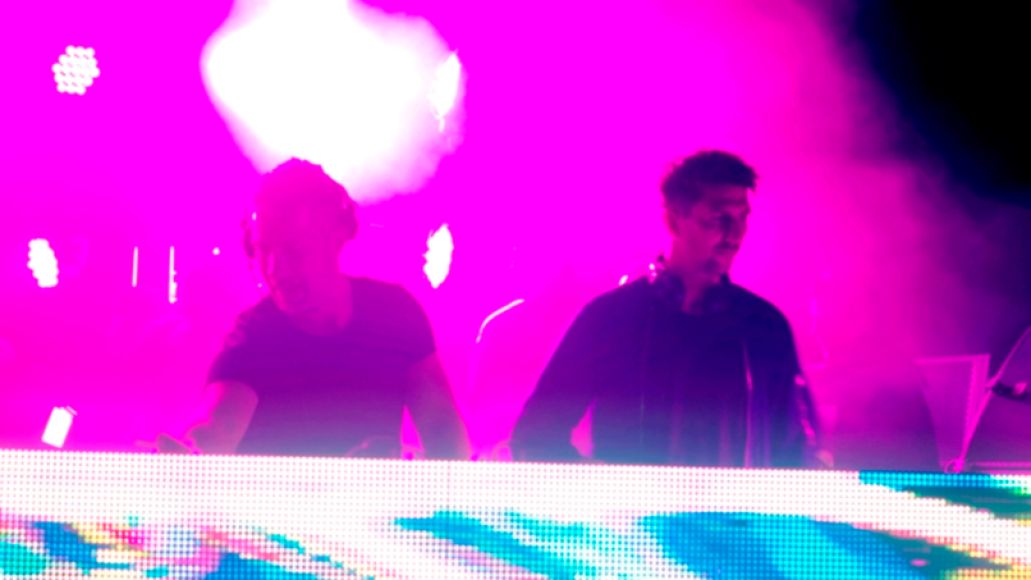 Hosting the likes of Pan-Pot, Dusky, Dixon, and Recondite over the weekend, the Pyramid Stage finally got the extra square footage it needed in the form of a new riser. The Pan-Pot crowd would need every inch of that additional space Saturday evening. Comprised of Tassilo Ippenberger and Thomas Benedix, the Berlin-based duo arrived to their sound with the mind of studied sound designers and heart of underground ravers. The result is as murky as it is crisp, somehow equal parts minimal, heavy, and kinetic. Pan-Pot is peak time for the 8 a.m. reveler, of which there are many during Movement. There’s a certain expertise in being able to groove for 16 straight hours; Ippenberger and Bendix have found the balance to help one get there. 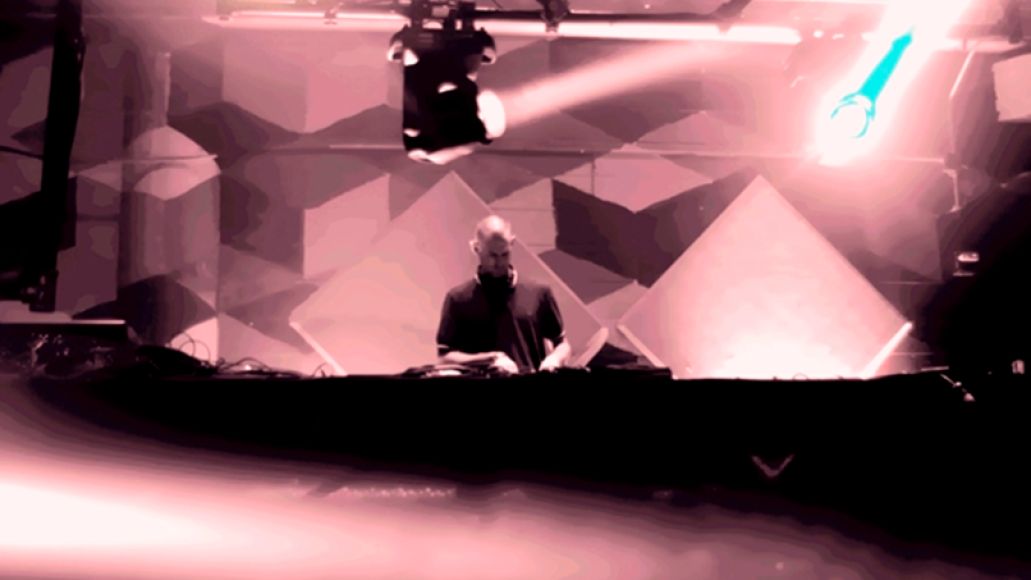 Packed just after gates opened, the Resident Advisor Underground Stage was its usual hot, sweaty mess for the entirety of Movement’s opening day. Midday appearances by techno-futurist Matrixxman and texture-savant Rrose were more than worthy of an early arrival. Mechanical and calculating, Matrixxman is adept at letting a single tone pulse, an ode to the heartbeat beneath the electronic bleakness. Like a doctor equipped with defibrillator paddles, Matrixxman than revitalizes the mix with a new life-force. Judging simply by the vocal responses, Matrixxman cut the best transition throughout the long weekend. 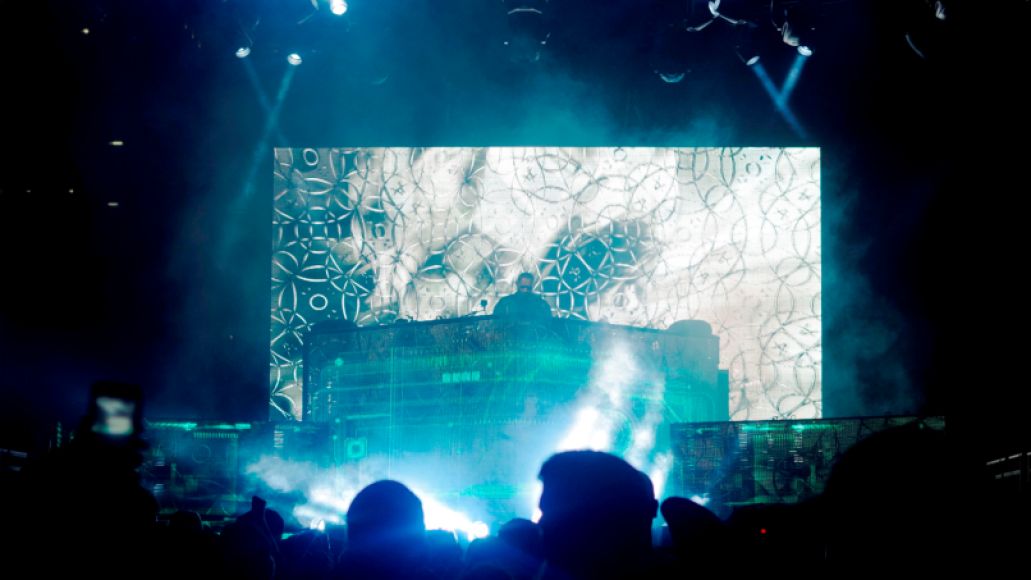 “It’s an old dude!” I overheard during the immersive closing set of Kevin Saunderson as E-Dancer. It seems laughable just writing it, but these two younger gentlemen appeared surprised that a DJ showing some age was capable of this degree of multi-sensory experience. It’s also a testament to how well these deep, emotive tracks (some nearing 20 years old) have held up. Regardless of the visual spectacle that engulfed the 52-year-old producer for the set, an alluring narrative was being arranged. Hushed breaks offered the mind and body time to briefly rest and reflect; a moment to pause in preparation for the next wave of heavy synths. Although he was competing for numbers against Testpilot and RA’s DJ of the Year Dixon, the glitter-adorned Saunderson continued to pack the Stargate Stage as the festival’s second evening came to a close. 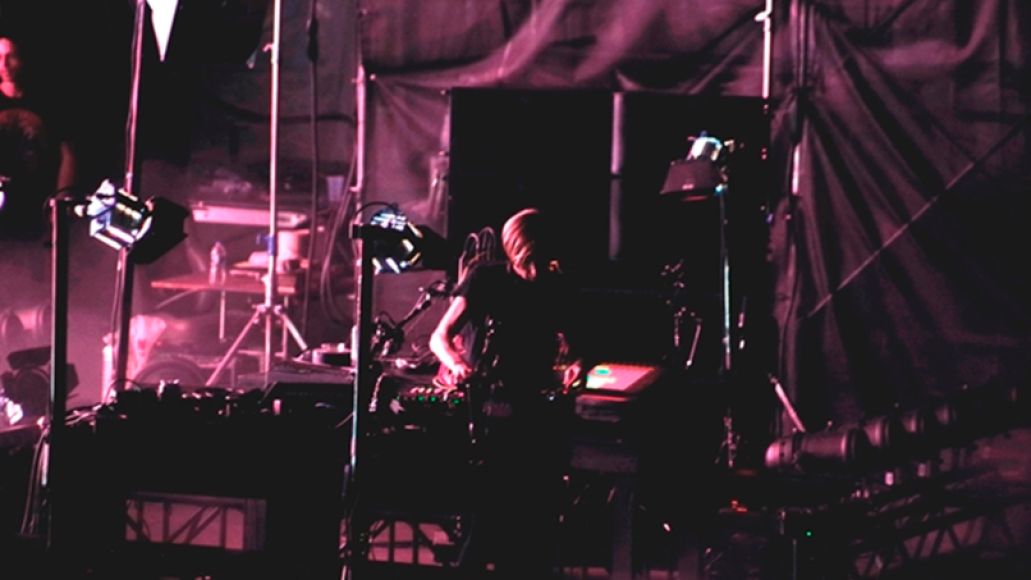 It’s unlikely Movement would exist in its current form had Richie Hawtin never taken to Detroit’s dance culture some 30 years ago. An influential talent amid the city’s second wave of techno, Hawtin provided the soundtrack for many of the parties that would eventually give rise to Paxahau (the production company behind the last 11 years of Detroit’s iconic festival). During that time, Hawtin has never stopped pushing the boundaries of his own DJ/production abilities and the art form itself.

That evolution arrived on Saturday night with his CLOSE performance, which finds Hawtin untethered from his decks, free to roam among a cornucopia of premium hardware and electronics. In doing so, Hawtin fulfills his desire to connect more intimately with the crowd – no longer shielded by a DJ table and front LED wall. It also deepens his singular ability to create ghost frequencies beneath the mix — those notes that seemingly emanate from within one’s eardrums before fusing low within the set.

While he’s now a Berlin resident, Hawtin continues to epitomize Detroit techno and the overall weekend experience at Movement. A time to celebrate the legends while continuing to push the entire culture forward. In the land of automation, locals innately understand that even momentary stagnation kills the hope of progress.