In 2009, Chris Cornell released his third solo album, Scream. The record saw the Soundgarden frontman team with renowned hip-hop producer Timbaland to disappointing results. Despite debuting high up on the charts of the Billboard 200, sales quickly tapered off. It wasn’t just the fans who were left feeling unfulfilled, either, as Scream was panned almost universally by music critics — it currently holds a paltry 42% score on Metacritic — as well as by Cornell’s own peers.

Trent Reznor in particular had some harsh words for the Cornell album. In a tweet heard ’round the world, the Nine Inch Nails leader wrote: “You know that feeling you get when somebody embarrasses themselves so badly YOU feel uncomfortable? Heard Chris Cornell’s record? Jesus.” The social media take quickly caused waves throughout the alt-rock community and its fans. 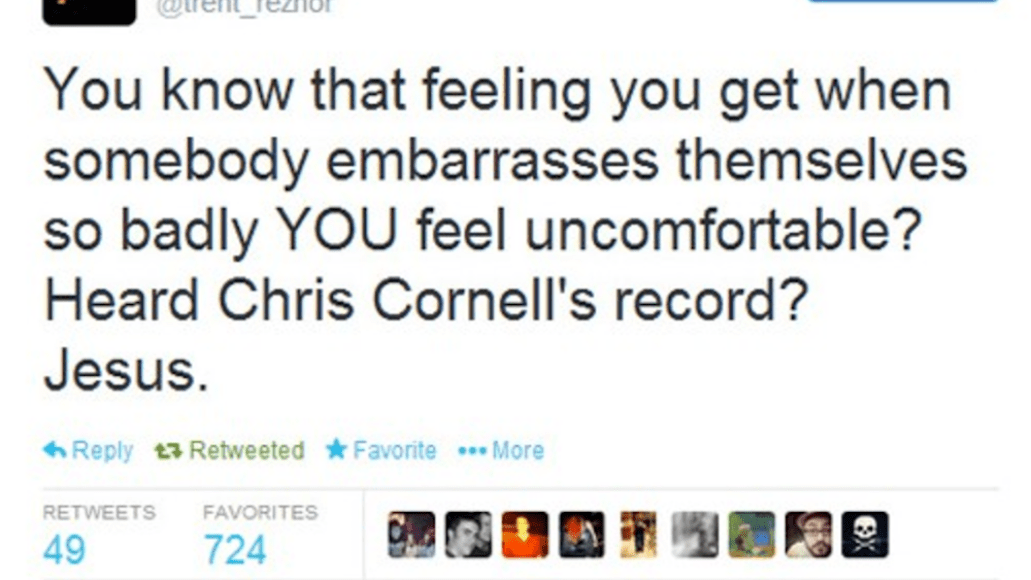 Now, in a new Rolling Stone article chronicling the final days before the grunge icon’s tragic passing, Reznor has revealed that he had written an apology to Cornell prior to Soundgarden and NIN’s joint 2014 tour. “He was very cool and generous about it – ‘It’s the past, fuck it. Let’s go on,'” Reznor recalled. “The Chris I met on that tour was a gentleman that completely had his shit together.”

In retrospect, he now sees his pointed Twitter comments as something of an impulsive outburst, one which he “immediately regretted.” “Seeing Chris do that record felt like a blow to me,” Reznor said, looking back. “I thought, ‘He’s above that, man. He’s one of the 10 best vocalists of our time.'”

Read the full article, which includes additional anecdotes from members of Foo Fighters, Pearl Jam, and Alice in Chains, here.

The music world continues to mourn the loss of Cornell, with Eddie Vedder, the surviving members of Audioslave, and Guns N’ Roses paying tribute to the fallen rocker over Memorial Day weekend.

Click here for our complete coverage of Chris Cornell’s death.