The Beatles’ eccentric conceptual masterpiece influenced albums across all genres for decades after its release.

No music fan or critic ever needs to say or write a sentence like this one: “The legacy of The Beatles is unparalleled in popular music.” The omnipresence of The Beatles, like the need for a cold beer at the ballpark, is one of those things that everybody knows. Yet with every band member’s birthday and every album anniversary, there arises a new batch of reflection on The Beatles, their place in pop music, and how artists from all over the world continue to enshrine the group’s legacy. 2017 marks an especially significant anniversary for John, Paul, George, and Ringo: one of the oddest Beatle creations, 1967’s Sgt. Pepper’s Lonely Hearts Club Band, turns 50 years old. At the time, Sgt. Pepper’s constituted an odd turn of events for the Fab Four, who, for an album, reimagined themselves as the eccentric titular band. The LP’s immense cultural, critical and financial success – capped off by a Grammy win for Best Album, the first rock album to take that title – signaled that Sgt. Pepper’s was not going to be just a flight of fancy.

In the 50 interceding years between 2017 and 1967, a common set of arguments has formed about Sgt. Pepper’s. Many deem it one of the first proper pop albums, rather than simply a collection of songs — the latter being what makes up much of The Beatles’ early catalog. The Beatles’ producer George Martin famously quipped that the shift toward album-centered songwriting was informed by another ’60s pop album masterpiece, The Beach Boys’ Pet Sounds: “Without Pet Sounds, Sgt. Pepper’s never would have happened.” Because of its loose concept and elaborate packaging (the vinyl edition included paper costume cut-outs, including mustaches), Sgt. Pepper’s regularly features on lists of early concept albums. The critical orthodoxy regarding the record helped cement it, and indeed the Beatles overall, as a case of pop as high art. The Beatles are undeniable masters of the radio pop song, and with Sgt. Pepper’s — to say nothing of many of the other great late albums of theirs – they proved that their imagination could extend across a whole album as a sonic canvas. 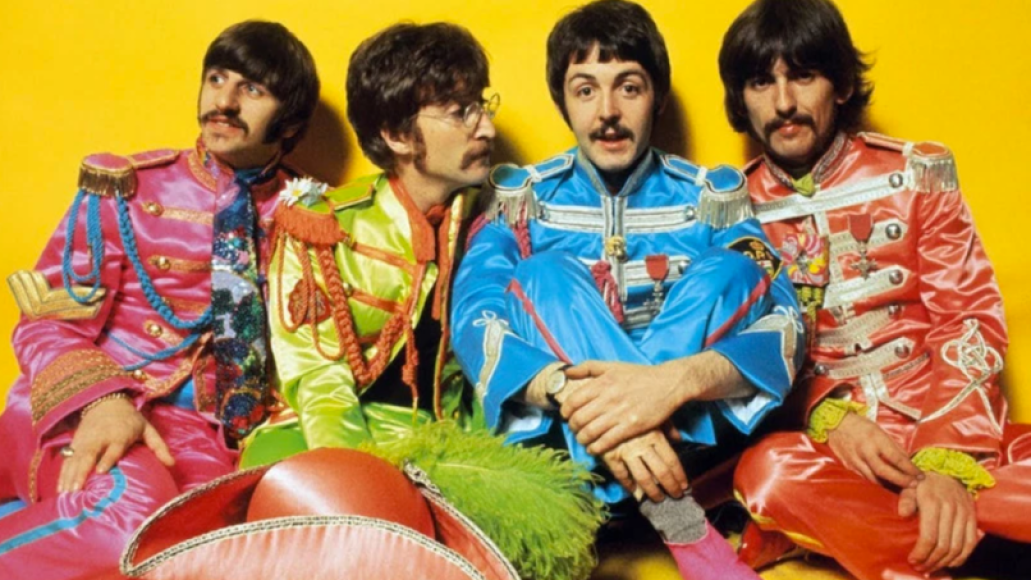 Tracing the influence of Sgt. Pepper’s can most easily be done when thinking about the big-picture elements of the record. Place the LP in the concept album family tree, and it’s not hard to see how it branches out into progressive rock and art rock. Sgt. Pepper’s’s frequent moments of psychedelia, including the famously unsubtle drug allusion “Lucy in the Sky with Diamonds”, can be counted as a prominent instance of psychedelic culture and aesthetics in the late ’60s. Sgt. Pepper’s even facilitated a brief musical cottage industry in the immediate years after its release, with bands like Paper Garden and The Family Tree taking after the record rather strongly. As with everything Beatles, one doesn’t have to look far to find people talking about what exactly the record means, for the band and pop music on the whole.

Studies of influence can be tenuous projects. With bands like The Beatles, one is afforded some ease: the unassailable cultural presence of the group has resulted in numerous parodies, allusions, and homages. It requires no difficulty to say that the black marching band uniforms sported by My Chemical Romance in the music video for “Welcome to the Black Parade” do a little more than wink at Sgt. Pepper’s. But The Beatles are not solely responsible for the existence of the concept album, nor were they the only band toying with psychedelic sounds, certainly not in the late 1960s. In emphasizing Sgt. Pepper’s’ contributions to the styles and genres it exemplifies, it can be easy to forget that for all their rightly earned stature, The Beatles are not and were not an island. Influence need not come from the most obvious sources.

The 10 albums in the list below can be traced back to Sgt. Pepper’s, even if these connections are sometimes not as strong as an obvious cause-effect relationship. These records draw from other influences and musical traditions; Sgt. Pepper’s, fine a work as it is, cannot entirely explain them. But whether it’s for an odd concept, or for an atypical approach to pop, these albums are difficult to imagine existing without Sgt Pepper’s. Whether directly informing a record entirely or hovering in the background like a ghost, the band you’ve known all these years is always around. In 1,000 Recordings to Hear Before You Die, Tom Moon curtly describes the “next stop” for the listener after hearing Sgt. Pepper’s: “There is none.” This list shows at least 10 reasons why Moon is wrong.