Earlier this month, Bob Dylan finally delivered his Nobel Prize lecture and collected his $900,000 prize money. Throughout his 30-minute lecture, the music legend reflected on how various musicians and bodies of literature — such as Moby Dick and The Odyssey — inspired his own songwriting. It was a poignant and personal piece from one of music’s best storytellers and wordsmiths. The only problem? Part of it may actually have been lifted from SparkNotes.

As Slate reports, Dylan’s discussion of Moby Dick included a number of phrases that are curiously very similar to those used in the SparkNotes edition of the classic novel. What’s more, a majority of these descriptive sentences and characterizations don’t appear anywhere else except SparkNotes — not even Herman Melville’s book itself. Dylan reportedly never once mentioned utilizing outside sources for his lecture, and appeared to pass off the entire thing as his own.

Here’s one such damning side-by-side comparison, per Slate:

“Another ship’s captain — Captain Boomer — he lost an arm to Moby. But he tolerates that, and he’s happy to have survived. He can’t accept Ahab’s lust for vengeance.

“…a whaling ship whose skipper, Captain Boomer, has lost an arm in an encounter with Moby Dick…. Boomer, happy simply to have survived this encounter, cannot understand Ahab’s lust for vengeance.”

“He calls Moby the emperor, sees him as an embodiment of evil.”

“…he sees this whale as an embodiment of evil.”

Slate offers up nine more instances in which Dylan’s wording seems too suspiciously close to SparkNotes to be pure coincidence. Find that chart below. 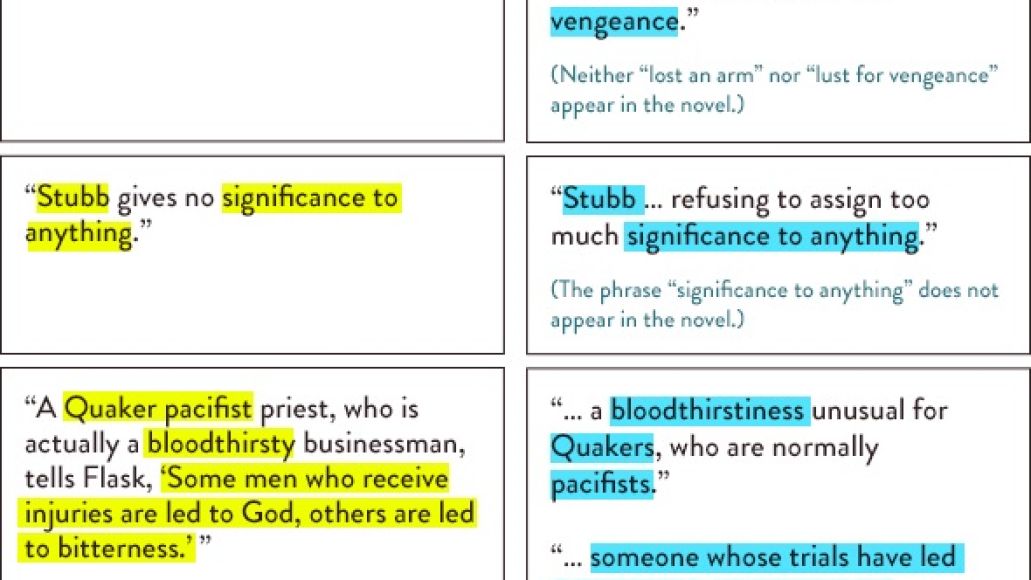 If Dylan’s lecture does in fact turn out to be a case of plagiarism (and not some ill-conceived bit of trolling or something?), how incredibly ironic considering the award he was given: the Nobel Prize in Literature.