“We’re not using the F-word on this — you know, festival,” Tool guitarist Adam Jones recently emphasized in an interview leading up to last night’s Glen Helen Amphitheater show. As the largest non-festival headlining date on the band’s latest album-less tour, it was a tough mindset to sell when looking at a day-long lineup that boasted friends and contemporaries like Primus, Clutch, Fantomas, The Melvins, and The Crystal Method.

But in truth, despite the makings of what many might define as a fest in today’s climate (a highly curated lineup, food trucks, a day in the sun with close friends), if anything, the experience felt closer to the traveling fests of yesteryear than to a mini Coachella. And even then, despite the presence of an Ozzfest-style vendor village and plenty of parking lot pre-funking (soundtracked by what else … Tool), there was at no time any question that this was one thing above all for the folks in attendance: a Tool show. 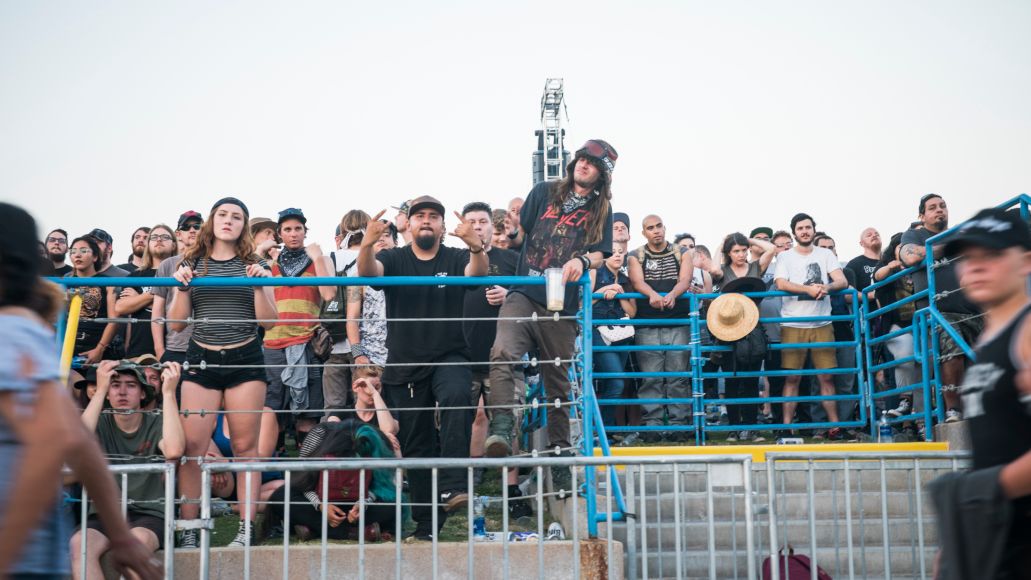 However, that didn’t stop fans from turning up by the thousands early on to make a day of things, catching sound-troubled sets from The Melvins (who slipped in a lurching rendition of The Beatles’ “I Wanna Hold Your Hand”) and a rare appearance by the Mike Patton-led Fantomas, which, thanks to a broken mic, yielded less of the Faith No More frontman than fans might have preferred. But above all, the anticipation remained intact throughout the steadily growing crowd, which found a healthy percentage of attendees donning shirts repping various bands from the lineup, though one name above all stood out imprinted across the chests of those in attendance.

Braving temperatures that teetered close to 100 degrees throughout the day, even as Clutch took the stage, which symbolized the first set to truly click with the audience, a notable lethargy quietly reigned over the crowd, who rarely took to their feet before sunset. Despite this, the band played a surprise scorcher of a set, whipping a small but passionate cross section of multigenerational fans into a frenzy for set closer “Psychic Warfare”. 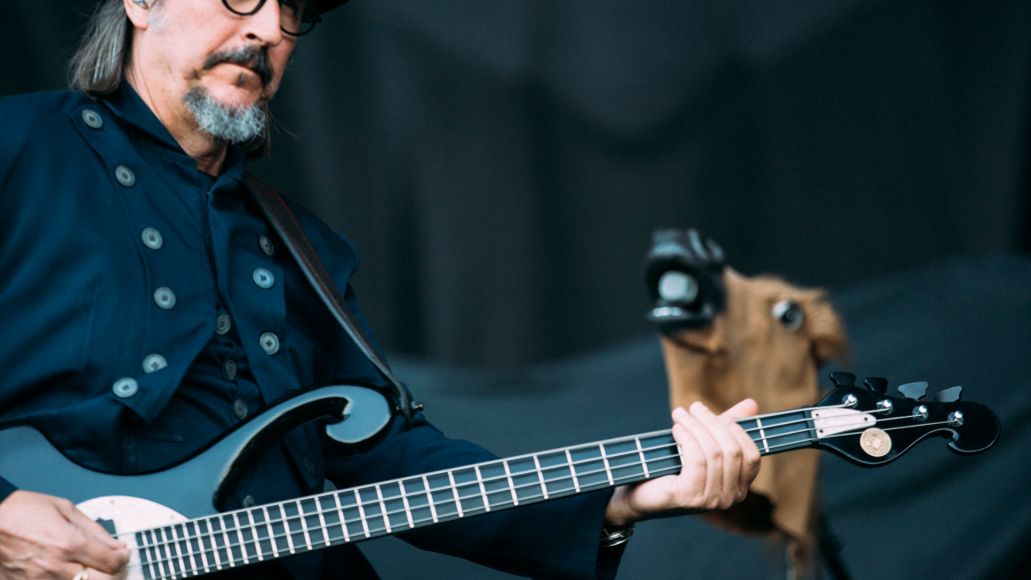 “PRIMUS SUCKS,” screamed fans throughout one changeover, perhaps to the chagrin of The Crystal Method’s Scott Kirkland, who served as the electronic duo’s lone presence. Peppering the day between main sets with ’90s big beat that veered from Fatboy Slim to the group’s own staples, Kirkland’s selections served as a welcome change-up from the day’s guitar-heavy lineup, even if they fell on respectful, but deaf ears.

For their part, Primus delivered a set unusually heavy on hits, including throwback staples like “My Name Is Mud”, “Wynona’s Big Brown Beaver”, and “Jerry Was a Racecar Driver”. With the oppressive heat finally beginning to break at sunset, fans thrashed about in their seats as the ocean of bodies on the venue’s massive lawn swayed to the Willy Wonka metal of the former Tool tourmates. A jovial Les Claypool dawned his classic pig mask, as family and friends looked on from the side stage, small children dancing along to every bass slap, reminding us that, despite best efforts, we’re not in Kansas (or the ’90s) anymore. 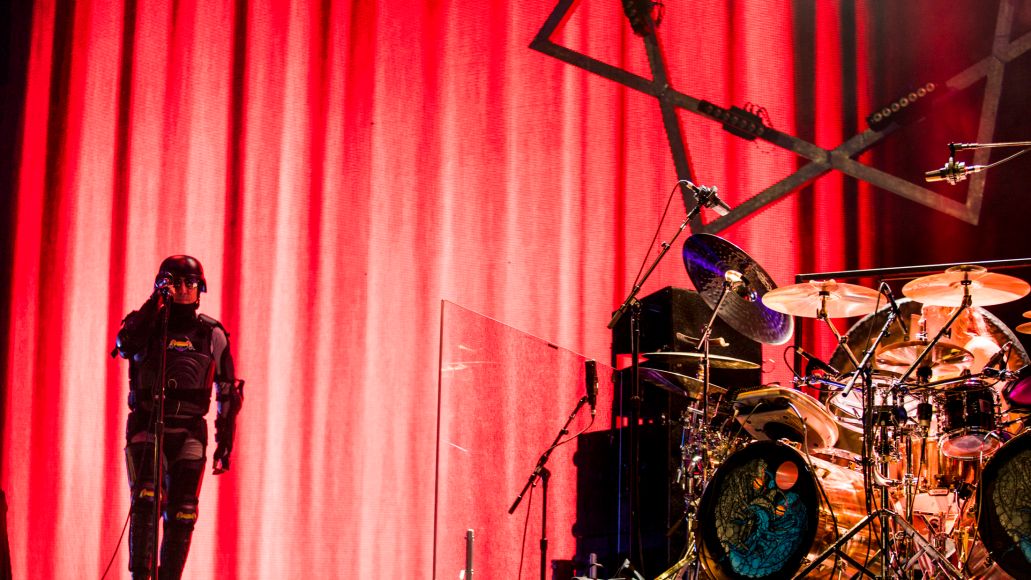 Taking the stage shortly after 9 p.m., any minor qualms about the event certainly faded as the day’s main attraction finally kicked off. Shrouded in darkness and backed by a monolithic, laser-shooting LED screen, it felt like technology had finally caught up to Tool’s heady visuals. They bulldozed through their now-standard set, weighted heavily toward fan favorites, including “Opiate”, which found the group teasing new sounds. Sneaking in what one can only imagine was an emotive preview of the group’s long-awaited new album, the night also boasted tour staple “Descending”, which guitarist Adam Jones has referred to as a teaser trailer for the long-gestating body of work.

New music wasn’t the only standout in the band’s set, which seemed littered with eerily prescient commentary on our strange times. Frontman Maynard James Keenan altered the lyrics to fan favorite “Aenema”, which found the singer’s ire toward LA now refocused on DC for obvious reasons. In fact, Keenan never broke character beyond a bit of thoughtful reflection on our current situation. “I’ve got good news, and I’ve got bad news,” he spoke for the first time midway into the set. “Combined, the good news and the bad news is … it’s all gonna work out or not … So, tonight? We dance.” Rallying off Keenan’s words, the band, tighter than ever, continued to wash adoring thousands in soundscapes that transported them far from our tumultuous political climate and even beyond the day’s earlier acts, leaving the sense that it was never a festival at all, because, in the end, Tool is an experience all its own. 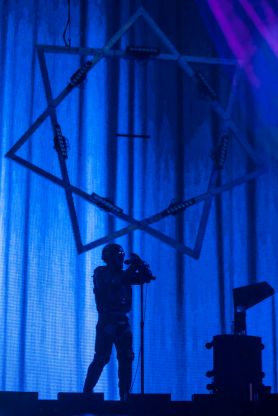 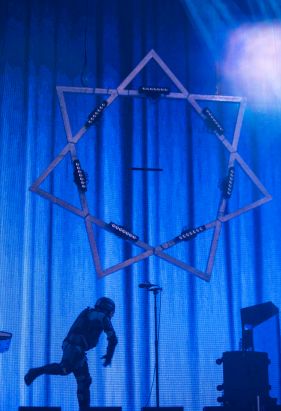 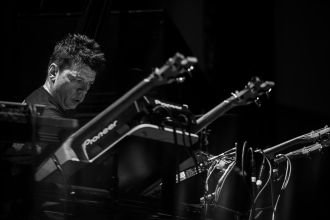 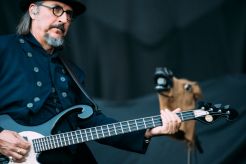 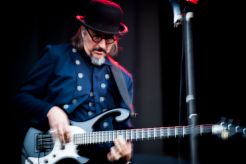