Here in America, summer music festivals have fully saturated the consciousness of young people. Gone are the days where music fans had to wait for a touring concert to come to them. Now, pretty much every region has multiple events scattered on weekends throughout the year. And in the hottest of months, when school is out and vacations are common, these fests have their time to flourish.

Many might forget that it’s from Europe where much of the American festival blueprint is taken. Overseas, they have been doing this for decades and in many ways are still the vanguard for how music festivals should be experienced. That’s why many people travel over the ocean to take in these fests, turning what would already be a special adventure to a foreign country into something unforgettable. The question then becomes where do you want to go and what do you want to see, a query that Portugal’s Super Bock Super Rock has been meeting with gusto since 1994. 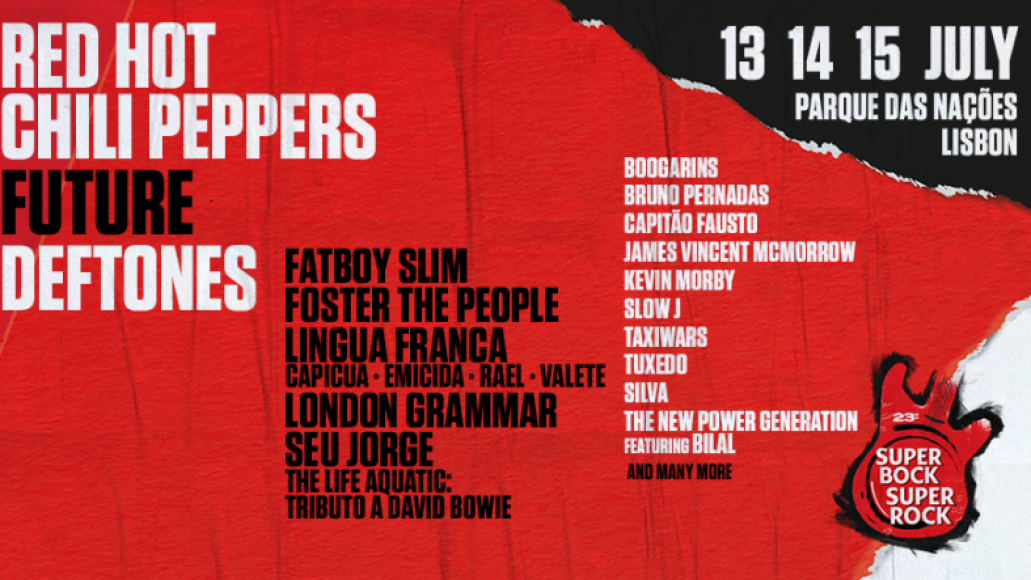 Located in Lisbon, just a five-minute metro ride from the airport, Super Bock Super Rock’s 2017 installment will play host to a pair of indoor stages, including its largest at the MEO Arena where its headliners will perform, as well as a pair of outdoor stages. From July 13-15th, the stages will welcome some of the biggest and brightest artists in the world, like SoCal rock legends Red Hot Chili Peppers, rap’s latest megastar Future, and hard rock luminaries Deftones. Headliners aside, the fest will also feature a diverse range of performers that include indie pop stalwarts Foster the People, vibey Brits London Grammar, legendary DJ Fatboy Slim, snotty Chicago rockers The Orwells, and LA-based songwriter Kevin Morby. If you want a cross-section of both music’s esteemed players and its up-and-comers, you won’t find much better.

And we still haven’t highlighted a couple of the aspects that makes Super Bock Super Rock truly special. The festival will also welcome a wealth of local Portuguese acts to the event, which include Lisbon’s own pysch rock group Capitão Fausto and producer Moullinex, and Xinobi. The mixture of homegrown artists with world-class touring acts gives the festival a unique identity that literally can’t be found anywhere else, which brings us to what might be the jewels in the crown of 2017’s event: Super Bock Super Rock will also host a pair of tribute performances to David Bowie and Prince.

The former comes from Seu Jorge, who will deliver his Portuguese renditions of Bowie’s classics, as seen in Wes Anderson’s 2005 film, The Life Aquatic with Steve Zissou. This set should prove particularly poignant given that the country actually speaks Portuguese. The second is from The New Power Generation, which features members of Prince’s previous backing band, who will honor The Purple One by performing his material, led by renowned singer Bilal. These two sets will combine for a reverent ode to a couple of music’s brightest stars that unfortunately burned out too soon. In anticipation of the festivities, we spoke with the festival’s head of booking, Vanessa Careta, who shared information about how a festival lineup is put together and what the future might hold for Super Bock Super Rock.

With the festival dating back to 1994, there must be a lot of pressure to maintain such a high bar for booking talent. How long have you been booking this fest and how do you feel overall with how this year came together?

I’ve been working with Música no Coração booking this festival for seven years now, but the job is done within a team and is done with Luís Montez, who’s been here since the beginning and is always very involved in the process. So there is this continuity from the year 0 of the festival and that is something that can be seen in every edition. We always have a mix of the new scene with talents that have been here for some time and that we consider timeless, and this is what you see this year in the festival. Acts that Super Bock Super Rock is bringing to Portugal for the first time, like Future, London Grammar, and James Vincent McMorrow. And much desired returns like Red Hot Chili Peppers, Deftones and Fatboy Slim.

Your three headliners all have quite a different appeal, with Red Hot Chili Peppers, Future, and Deftones. Talk a little about what each of these brings to the table. Is there ever any concern with the acts being too disparate or do you think that the contemporary festival attendee has pretty diverse taste?

There is the concern of keeping the festival diverse and multiple on its offer. There are many reasons for this, including the fact that we have day tickets that make more than half of the sales, especially since we returned to Lisbon. We also have multiple stages within the festival, with some even happening at the same time, so we want to give the audiences different choices and the experience of having more than one festival to choose from. And it does seem that there is more and more a diverse taste. The idea that people only listen to one genre of music seems to be a false one. Especially now that the access to music and to diverse styles is so easy. And with the evolution of so many genres that are pushing the barriers of their genres and mixing different things together. There’s also the element of tribute this year. You have The New Power Generation performing with Bilal for a Prince tribute. This must be extra meaningful for the fest, considering that Prince himself performed at Super Bock Super Rock in 2010.

The Prince show in 2010 is one of the most memorable ones for us, and having the chance to do a tribute to him and to that moment with a band that accompanied him and is such an amazing group of musicians and with such a special guest as Bilal was something that got us all excited. Returning to music’s history and remembering some of its greatest is a soft spot of ours. We’ve had tributes before. In 2014 we had a Tribute to Lou Reed performed by some of Portuguese best artists and it was a beautiful moment. When you have a festival that’s been around for so long as Super Bock Super Rock it’s only natural to keep your eyes on the history of it as well as the road ahead.

And then you have a David Bowie tribute as well with Seu Jorge doing his Life Aquatic thing. I can’t think of another festival that has had two marquee tribute performances like this before.

With Seu Jorge there’s also the added strength that he is a very well loved artist in Portugal and is playing the songs that first brought him to our scene and that got the attention of many people. Being a tribute to David Bowie it is a tribute that was created in life. It’s a beautiful set of David Bowie songs sang in Portuguese that we first heard on the screen on 2004 on The Life Aquatic with Steve Zissou and we’ll now have the chance to see being played live.

I think most people wonder what goes on for a festival when an artist cancels, particularly one of your bigger artists, which happened for you guys with Tyler, the Creator.

In terms of filling out the lineup, you’ve also got artists like The Orwells and Kevin Morby. In America, those are still rising acts. Are they well known in Portugal or will this be an occasion of exposing younger artists to new fans at the festival?

Kevin Morby is a special case as he’s built a very strong following here in Portugal. He might be better known here than he is in the USA. But the festival is also an occasion to showing artists that might not be so well known. Acts like The Orwells, Tuxedo, TaxiWars are acts that maybe some more “well-versed” fans already know but for most it’ll be great discovery. 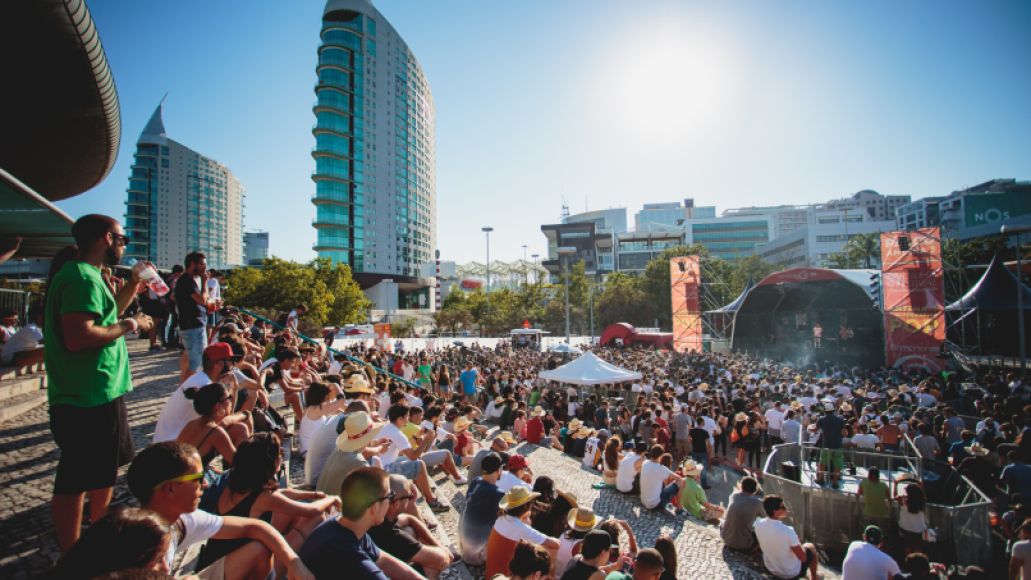 And of course there are the local artists on the bill. Tell us about the Portuguese talent you’ve booked. Are some of these larger artists in your country? Or do you have some newcomers on the lineup as well?

Portuguese music is going through a real rich moment. In terms of quantity of new acts and the quality of the music they are creating and its richness in the mix of genres. There are some larger acts like Capitão Fausto, Moullinex, and Xinobi who are already selling out larger venues in Portugal. There’s also Língua Franca, this incredible hip-hop super project with Emicida, Rael, Valete and Capicua. Gigantic MCs from Portugal and Brasil. Some newer acts that are already thriving are Throes + The Shine and Octa Push. Two amazing bands that are mixing African rhythms with genres like more stoner rock (Throes + The Shine) or electronic music (OctaPush) and Alexander Search, a new project from Salvador Sobral (who just turned Eurovision on its head) and the pianist Júlio Resende that takes the name of this heteronym of Fernando Pessoa and gives some of his poems a new voice.

Were there any artists you tried to get this year that didn’t work out that you can talk about specifically?

Without being too specific there are always some artists that are on our first draft of the line up that don’t make it to the final one. There are many things that have to come in place for us to book an artist and if the touring plans don’t match with our dates we just have to try again another year.

Who are some dream artists you’d love to get in future years?

We’re already working on some of those for next year.

If you could reunite a band that’s broken up for the fest, who would it be?

From The White Stripes to R.E.M. to Moloko, to the Portuguese hip hop band Da Weasel, it would be hard to choose just one.