Three years after yanking her music from Spotify, Taylor Swift just up and decided to throw it all back up there on the same day Katy Perry dropped her new album, Witness. Just a coincidence? Or was it yet another blow in the ongoing feud between the pop starlets? Whatever the case, it’s paying off.

Music data maestro Kworb has pulled the latest Spotify streaming numbers and, while Perry’s Swift-bashing “Swish Swish” leads the pack, Swift’s catalog is making a far greater impression. As of this writing, Swift has seven songs in the top 200 (two of which are in the top 100). Compare this to Perry: “Swish Swish” currently sits at #55, but only one other track is represented. That would be Witness’ “Chained to the Rhythm”, which hovers below Swift’s songs at the bottom of the chart. 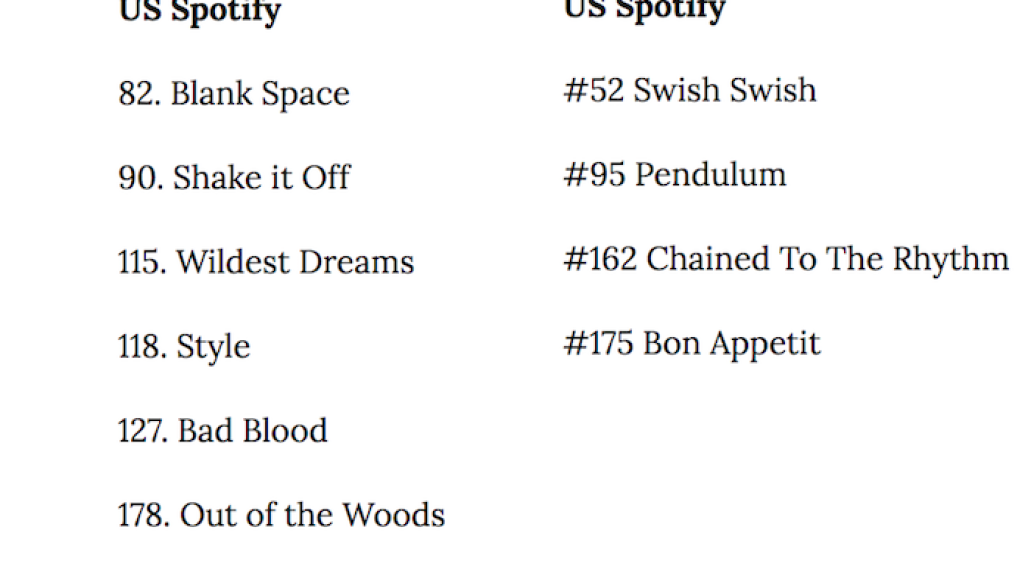 Perhaps aware of the silliness of their feud and the negative impact its had on her own commercial success, Perry recently extended an olive branch to Swift. In an interview with Arianna Huffington that took place yesterday during Perry’s ongoing Big Brother-style live stream, Perry said, “I’m ready to let it go. Absolutely, 100 percent. I forgive her, and I’m sorry for anything I ever did, and I hope the same from her, and I think it’s actually… I think it’s time. There are bigger fish to fry, and there are bigger problems in the world. I love her and I want the best for her, and I think she’s a fantastic songwriter, and like, I think that if we both, her and I, can be representatives of strong women that come together despite their differences, I think the whole world is going to go, like, ‘Yeah, we can do this.’”

“Maybe I don’t agree with everything she does, and maybe she doesn’t agree with everything I do, but like, I just… I really, truly, want to come together, and in a place of love and forgiveness, and understanding and compassion,” Perry continued. “God bless her on her journey. I want to operate in a positive, kind space. I want to be an example of kindness, compassion, love, and I forgive and forget. That wasn’t easy for me. I think everybody knows that wasn’t easy for me. But it’s fine. I want to let it go. I really want the best for every person.”

Taylor Swift is out performing Katy Perry on Spotify