Set the controls for the heart of every Pink Floyd fan: We’re celebrating Roger Waters’ highly anticipated return with a week of Floydian features that will make you wish you were here forever. Today, Andrew Bloom delves into the significance of the song “Wish You Were Here”.

“Wish You Were Here” opens with a riff that sounds as though it’s from an old recording, crackling out of a weathered car radio. Then the cleaner tones of an acoustic guitar emerge on the track, playing along with that A.M. sound. The interplay between the two conjures the image of a man listening to those sounds from long ago and trying to complement them in the present day. From the very beginning of the track, before a single lyric is uttered, “Wish You Were Here” evokes a sense of reflection, of lingering on something lost that the musician’s trying to recreate, recall, and summon once more back into the here and now.

That is the crux of Pink Floyd’s arguably most famous song — the combination of what was and what is and the contemplation of where you are in relation to where you used to be. The title track off the band’s seminal 1975 release, “Wish You Were Here” is rooted in a specific event and specific figure in the group’s past, one who seems to symbolize the turning point from when the band was young and hungry to when its members became part of the rock and roll machine, wondering how they had arrived at that point and how much it had changed them. 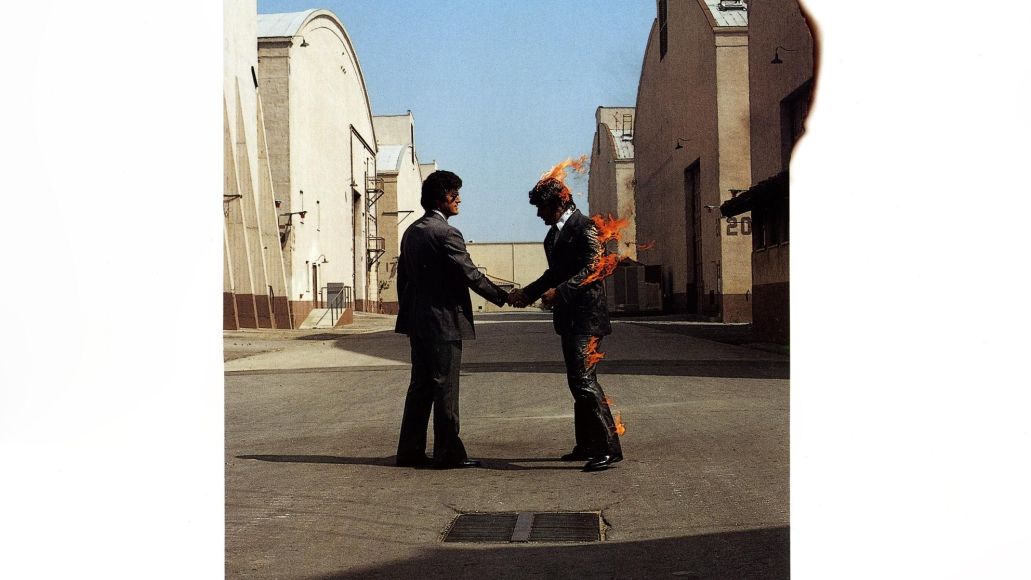 That figure is Syd Barrett, the former member of the band who, after a mental breakdown, left following the release of the group’s first studio album. It fits, then, that “Wish You Were Here” anchors itself on Barrett, the probable “you” in the song’s title. David Gilmour, who sings lead on the track, admitted that while the song has a broader scope than just a tribute to their former colleague, he “can’t sing it without thinking about Syd.” Barrett was the first casualty of the band’s breakthrough, and looking back as then established stars, Gilmour and Roger Waters, the other musician behind “Wish You Were Here,” fixate on Barrett as a symbol of their early idealism, wondering if the aspirations he stood for have curdled into complacency.

Wish You Were Here, the record that shares a name with the venerated tune, is an album-length critique of the music business and an extended rumination on the ways in which it’s affected Gilmour and Waters. The pair collaborated to write the music on the title track, with Waters penning the lyrics and Gilmour singing the lead. That creates a dual confessional quality to the song, a sense in which both men linger on the thought of Barrett as a connection to a time when the band was just starting out, raw and earnest, and consider whether in losing him they eventually lost those parts of themselves as well.

In short, it’s a song about a specific and recurring worry for any artist — the fear that you’ve sold out and lost a vital part of who you were and what spurred you to express yourself artistically in the first place. It’s an idea given life in “Wish You Were Here” by the specter of Waters and Gilmour’s former bandmate, who raged on in the group’s early years but faded away when it started becoming something else. Almost every major musician has a song about an unavoidable insecurity that they’ve lost the ideals they started with and instead given into the limiting strictures and demands of the music industry.

“Wish You Were Here” functions as a reminder, a bulwark against that. Roger Waters has said that the song was meant to encourage him “not to accept at lead role in a cage … to keep auditioning for the walk-on part in the war” because that’s where he hoped and wanted to be. His lyrics are poetic but not opaque, evincing a sense of self-doubt and a nagging question of whether he can even tell the difference between the purity he espoused and admired in the band’s early days and something more sanitized or anodyne.

His words linger on the notion of absence, a theme present throughout the album. The first verse focuses on that self-doubt and the question of whether his ability to discern truth from artifice is gone. The second is a worried self-assessment of whether Waters and Gilmour have let go of their raw passions amid the cold comfort of their success.

But the third is a lament, a simple wish to bring back the person who’s missing and, in that, to recover what may have been lost. Waters and Gilmour are wondering if, despite all their musical success in the years since Barrett’s departure, they have simply been “running over the same old ground,” with little to show for it. That closing cry is a plea both for their departed bandmate, but also for the times when they all were together and their purpose felt truer and less clouded by the demands of commerce and fame.

But the reason that the song is still so resonant and memorable all these years later is that it takes those very specific concerns — about the loss of a friend and brother in arms and the worry that too much time in the music business had started to wear away at them — and frames them in a broader, accessible way. The sense of a person from your past who represents a nostalgic time in your life is a relatable one. The notions of having lost your way and sacrificed the fires of passion for the reassuring ease of the path of least resistance are universal.

That is the beauty of “Wish You Were Here”. Waters has said that while the song means something specific to him about that urge to keep himself fighting and scrapping and not resting on his laurels, he intentionally wrote it to be broader than that, and that whatever different listeners bring to the song or extract from it can be equally valid. By tying his lyrics to very distinct and individualized concerns, there is a vividness and clarity to Waters’ poetry and Gilmour’s pained warbles, ironically enough creating the sort of purity that the pair are worried about losing. And yet, with the earnestness of Waters’ words, and in Gilmour’s rueful performance of them, the track grasps at something larger, a part of all human experience.

Whether listeners find themselves reflecting on love or labor, the sentiments on change and absence and regret still resonate. The wistfulness in “Wish You Were Here”, the ways in which the track captures a particular combination of nostalgic melancholy and self-doubt, speaks to individuals across borders and across time.

But that opening riff, the combination of the static-filled tones in what feels like an older tune blended with the new, fulsome sounds of the acoustic guitar, sets the stage for it all. That musical inflection point is a symbol of the tenuous connection between the rough-edged beauty of the past and the clean but calm longing in the present. It’s a sonic metonym for the larger internal conflict of “Wish You Were Here”, one as striking and poignant when molded to the universal concerns about lost ideals and waning passions as it is when lamenting the absence of a missing friend or when bandmates are worrying not just about how much truth is left in their art, but also in the people making it.