This week, Atomic Blonde storms into theaters to continue the reinvention of Charlize Theron as one of the more formidable action stars of the present era. It’s likely that Mad Max: Fury Road will see the Oscar winner cast in a broader swath of roles, but it’s just the latest phase for a star who’s been delivering a diverse array of performances for years.

From the steely resolve of her acclaimed turn in North Country to the knowing high camp of her work in the recent Snow White films to the daffy comic chops displayed in Arrested Development (“Mr. F!”), Theron has established herself as a chameleon of high caliber, able to deal in self-effacing irony and grave, stirring drama with presence and grace.

As she continues to distinguish herself as one of the substantial actresses of this current generation, we thought it time to commemorate some of her best work, from great performances in great movies to standout performances that elevated lesser work by her presence. From the wasteland to the Minnesota suburbs to hell itself, here are our 10 favorite performances to date. 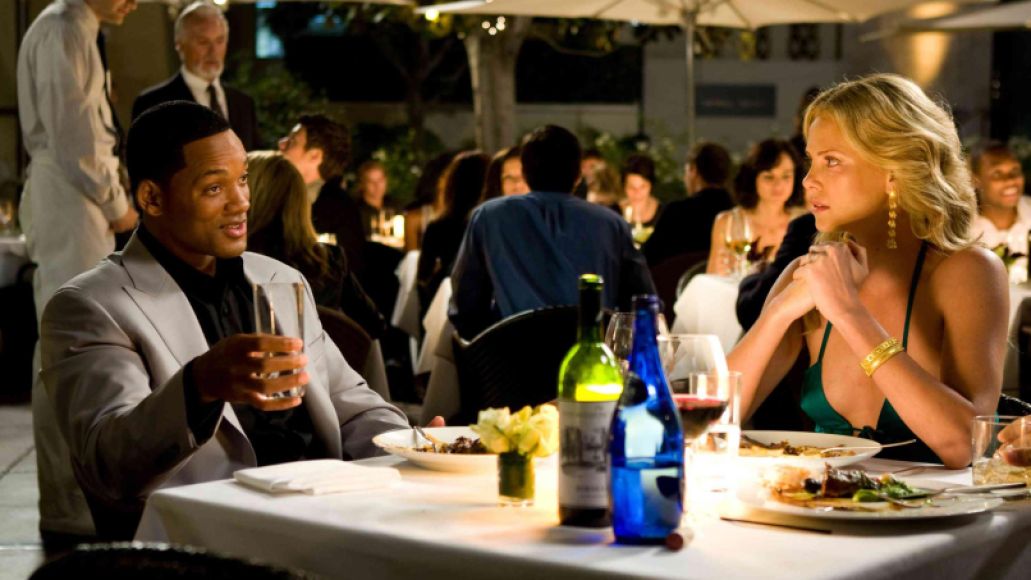 Okay, bear with us here. It’s not that we’re necessarily going to bat for Hancock, a film that’s as potent a case study in studio butchery as you’ll ever come across. But for all of the film’s faults (some of which are glaring), Theron delivers a memorable turn as Mary, a woman with superheroic secrets of her own. While the film largely whiffs on its tonal shift from dark comedy to fateful drama, Theron anchors her scenes as a different kind of lost hero from the film’s lead, a centuries-old being that depends on Hancock’s absence for her very survival. Much of what does work about the film is owed to Theron, who brings a weight to her scenes with Will Smith’s antihero that it struggles to muster otherwise, as she grapples with the difficulty of being fated to live the rest of her potentially eternal life separated from her truest companion. That she also gets a handful of big laughs while accomplishing all of this is just one more testament to her gifts as a performer. –Dominick Suzanne-Mayer 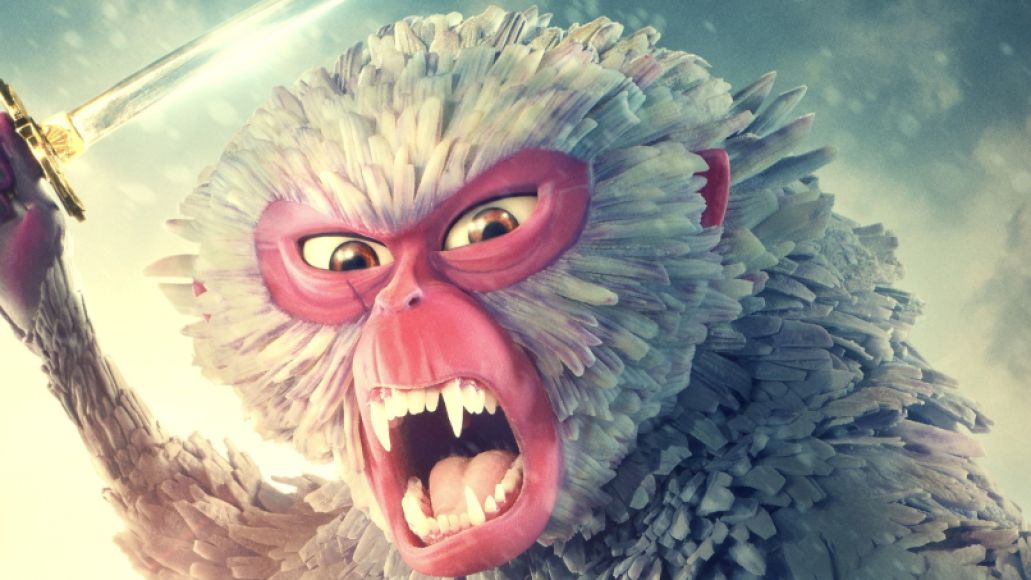 Hey, voice performances are performances too! And in Laika’s sublime fourth film, Theron is the heart of Kubo’s gorgeously ornate tribute to stories and their ability to transcend even the most impossible distances. Her comic timing is impeccable, as Kubo and Monkey forge a slow, grudging bond while they travel together to find the three objects capable of stopping the Moon King from destroying the entire decent world. But as the film eventually reveals, Monkey has secrets of her own, and it’s the slow softening of tone that Theron deploys as the film goes on that it builds some of its most nakedly emotional moments. It’s a more delicate turn from the often steely actress, but her warm delivery is perfectly in keeping with the film’s similarly gentle sensibilities. –Dominick Suzanne-Mayer 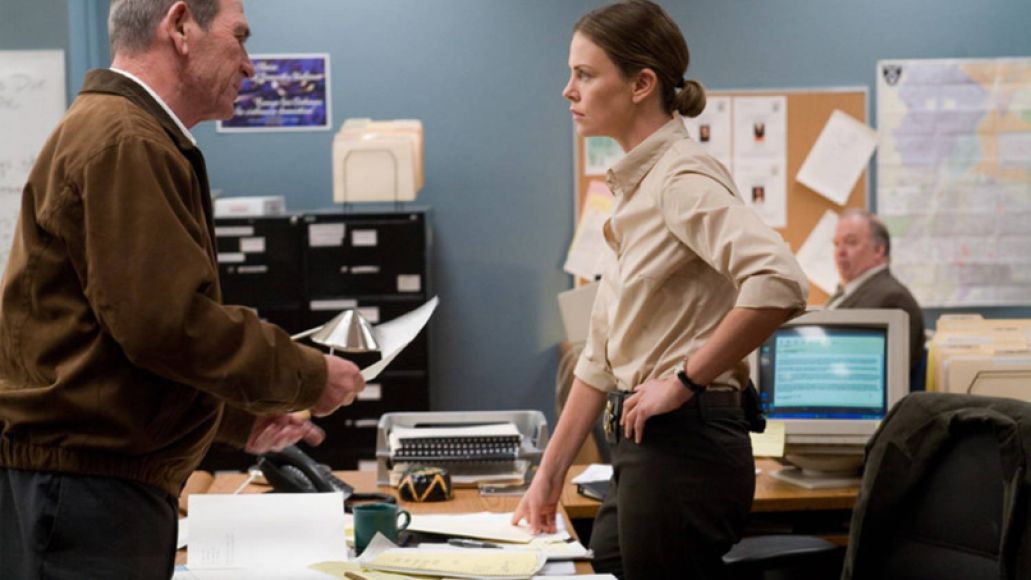 After Crash, Paul Haggis became something of a target for film critics looking to make some sense of how his occasionally effective but frequently heavy-handed film won Best Picture at the 2006 Academy Awards over a number of more deserving candidates. It’s a shame, because his follow-up In the Valley of Elah is an underrated and fascinating take on the revisionist “war movies” so popular during the sustaining days of the Iraq War. Theron’s performance as a no-bullshit detective assisting in the investigation of a brutally murdered soldier is a terrific example of studied understatement, the actress pressing through the pragmatic details of an unimaginable case with the sort of tightly honed discipline so often required of the job. Even as she encounters casual misogyny in the workplace, or an escalating series of horrors and secrets surrounding the young man’s death, Theron presses forward, digging ever deeper into the fugue of secrecy that surrounded so much of that war, and that era. –Dominick Suzanne-Mayer 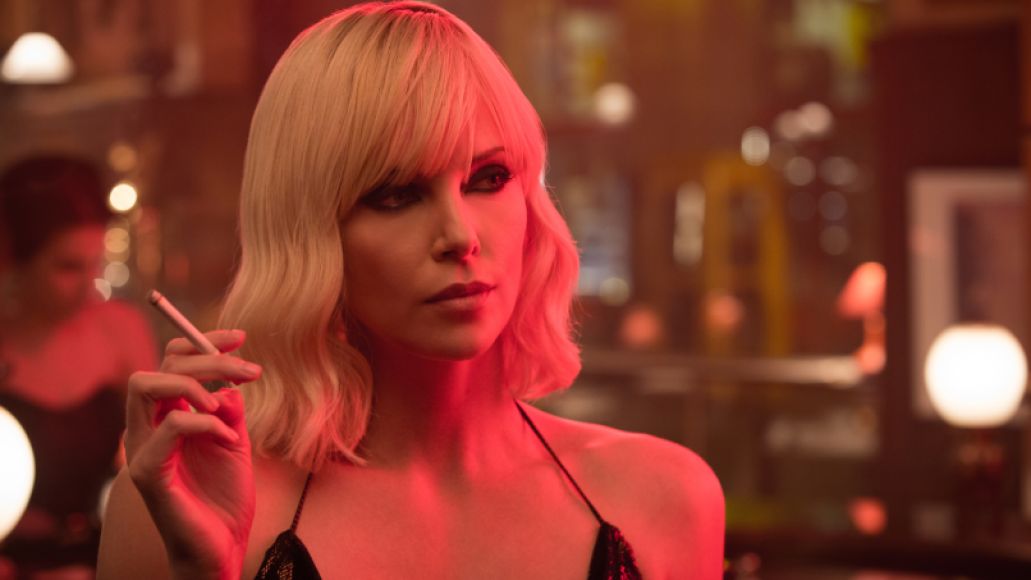 At this point, it’s hard to argue against the idea that Theron is this decade’s most formidable female action star. It’s been a long time coming, and she spent years bulking up her resume, officially nabbing the title in 2015 as the scene-stealing, one-armed hero, Furiosa, in George Miller’s Oscar-nominated masterpiece, Mad Max: Fury Road. (More on that film later.) So, with Atomic Blonde, it’s not exactly surprising to see Theron hold down the fort and kick ass. Instead, the shock and awe comes from the lengths she’s willing to go all throughout David Leitch’s adaptation of Antony Johnston’s graphic novel The Coldest City. As the all grit and no guff Agent Lorraine Broughton, Theron pulls off a medley of cutthroat heroics, all of which earn every kernel of your popcorn. Early on, she uses a rope to swing from a bad guy’s neck to a balcony below like Indiana Jones. Much later, she takes down, like, 45 assholes in an epic long shot a la The Raid 2. But, her acrobatics extend well beyond the action, as she winds up turning an unremarkable script into a sultry, steamy affair, one that should leave everyone feeling feverish by the time the rest of the new wave soundtrack rockets over the credits. –Michael Roffman 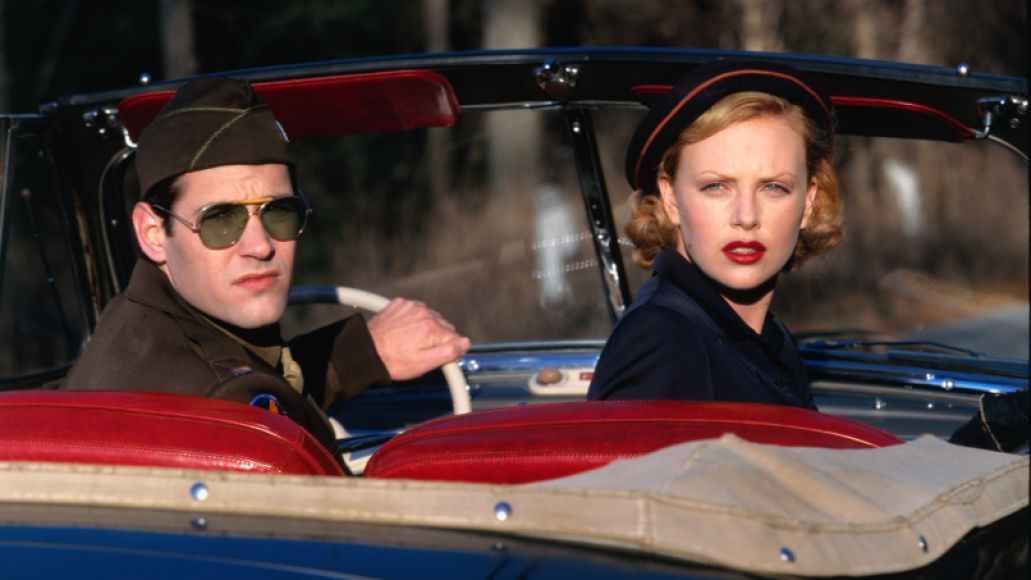 This Oscar-winning adaptation of John Irving’s novel about an early/mid-20th century orphanage in Maine serves as something of a peak to the actress’ first wave of major roles as Candy Kendall, a young woman who comes to the orphanage with her boyfriend Wally in search of the kind of medical help that few hospitals of the time would offer. As Wally goes off to war, and she grows closer to Tobey Maguire’s steadfast Homer, Theron finds aching depths in a young woman forced to learn in the hardest ways that love usually ends up coming a distant second to responsibility in life. It’s a performance in a more traditional Hollywood mold, one of sweeping romance and tragic regret, and it’s one of the first to firmly cement her as a performer of substantial merit. In a film full of wistful nostalgia and devastating reality alike, full of exceptional performances, hers emerges as one of the very best. –Dominick Suzanne-Mayer 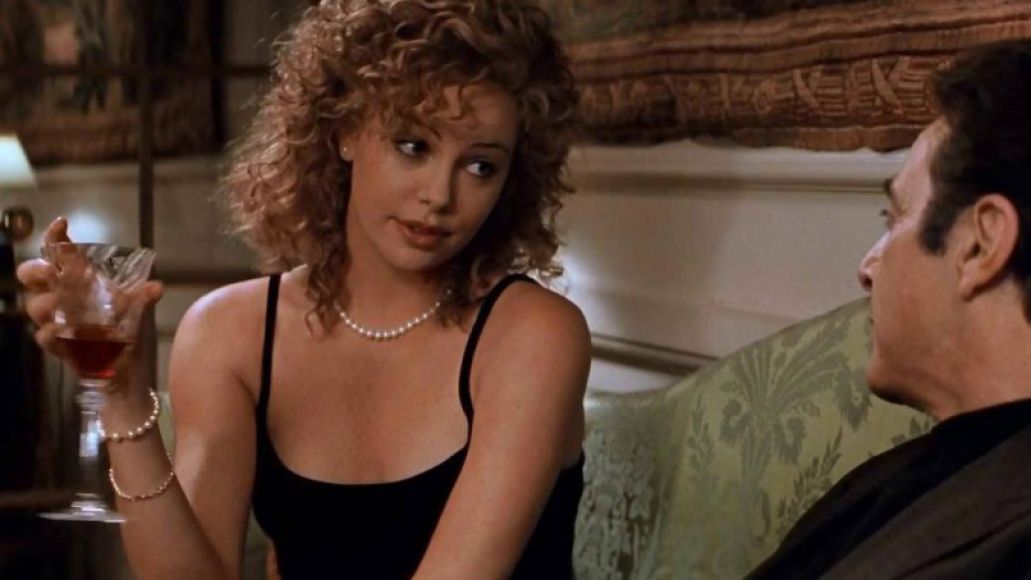 No matter how wild you remember The Devil’s Advocate being, it’s somehow even weirder than you probably recall. The sprawling 1997 opus of soulless lawmakers and Al Pacino playing the literal Christian devil also saw Theron’s star-making performance as Mary Ann, the wife of Keanu Reeves’ morally wayward lawyer. In a film rife with excesses, Theron goes for absolute broke in the role, to phenomenal effect, delivering a dramatic performance that plays to the most distant seats in the back of the house. (In the best possible ways.) Plagued by increasingly horrifying visions, Theron frames Mary Ann as a devastated victim of Satanic gaslighting, and as the film tracks her on her path to madness and eventual ruin, the actress declares herself as an absolutely ferocious onscreen presence, even if the film around her regards the character in disquieting and often lurid ways. –Dominick Suzanne-Mayer 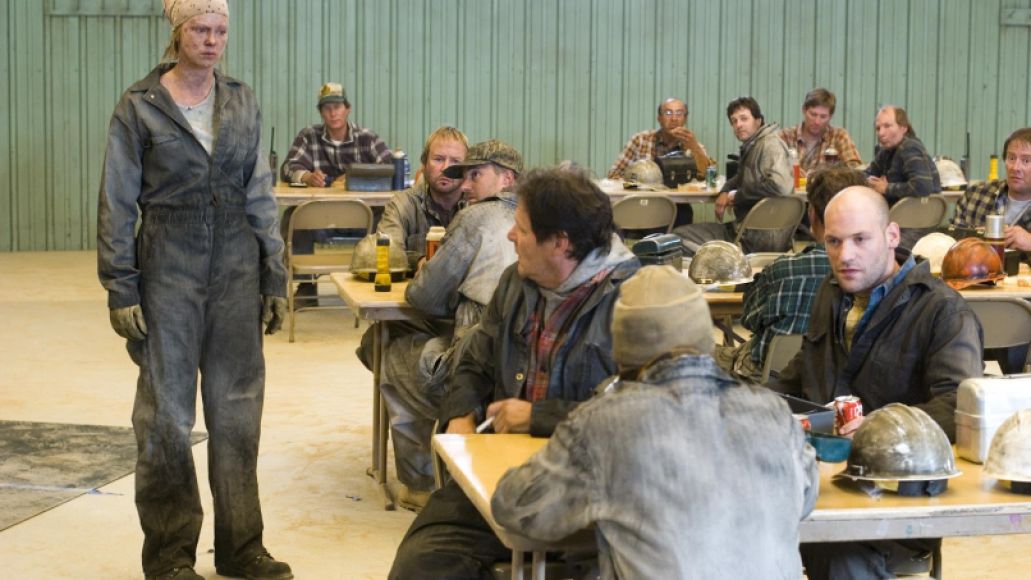 The second of Theron’s nominations for Best Actress at the Oscars came in 2005 with North Country, based on the real-life case of Lois Jenson, an Eveleth, Minnesota miner who sued her mining company in 1984 over the pervasive sexual harassment and social degradation she was put through by many of her coworkers. Although the film is only based on Jenson’s story (as Jenson herself declined to be involved with the feature), Theron imbues Josey Aimes with the same sense of life, as a hardworking mother struggling against the dictates of her industry and her time; even by the mid-‘80s (or late ‘80s, as the film tells it), there were still those of the firm belief that Josey didn’t belong there, and was taking jobs that rightfully belonged to the men. Though the film is hardly averse to a number of “Oscar-bait” biopic tendencies, Theron delivers a performance of tenacity and raw emotion that sets it apart from so many of its contemporaries. It may be a feature from a familiar mold, but the power Theron offers at its center is rare. –Dominick Suzanne-Mayer 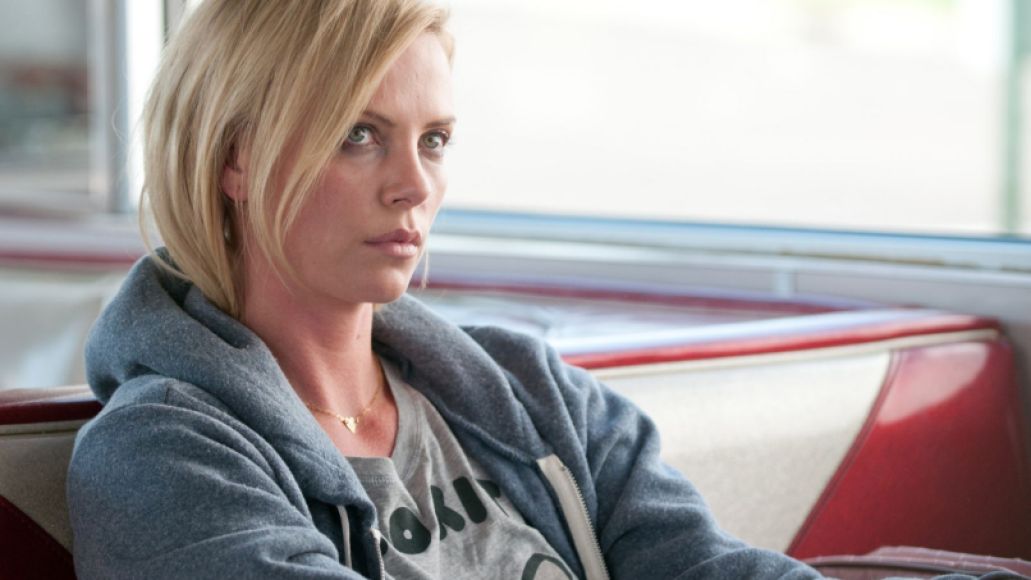 We’ll make a serious case for Young Adult as one of the great, unheralded films of this current decade, and it’s entirely a showcase for the actress, who’s in almost every frame of Jason Reitman’s savage character study about a callous YA writer who returns to her suburban Minnesota hometown to reclaim her high school sweetheart and some of her lost former glory. But it’s true that you can never go home again, which Mavis learns the hard way as she realizes that all those dweebs she used to bully have their own fulfilling lives, while she remains suspended in the state of “mean girl.” Yet there’s more to Mavis than her cruelty, though it’s an intrinsic part of her being; in Theron’s hands, she becomes as much a figure of empathy as scorn. It’s a brutal dissection of the kind of person who peaked in high school, but Theron finds notes of rage and heartache and longing in that type, even as the film and actress alike posit that there’s likely a ceiling for how much such a person can ever truly change. –Dominick Suzanne-Mayer 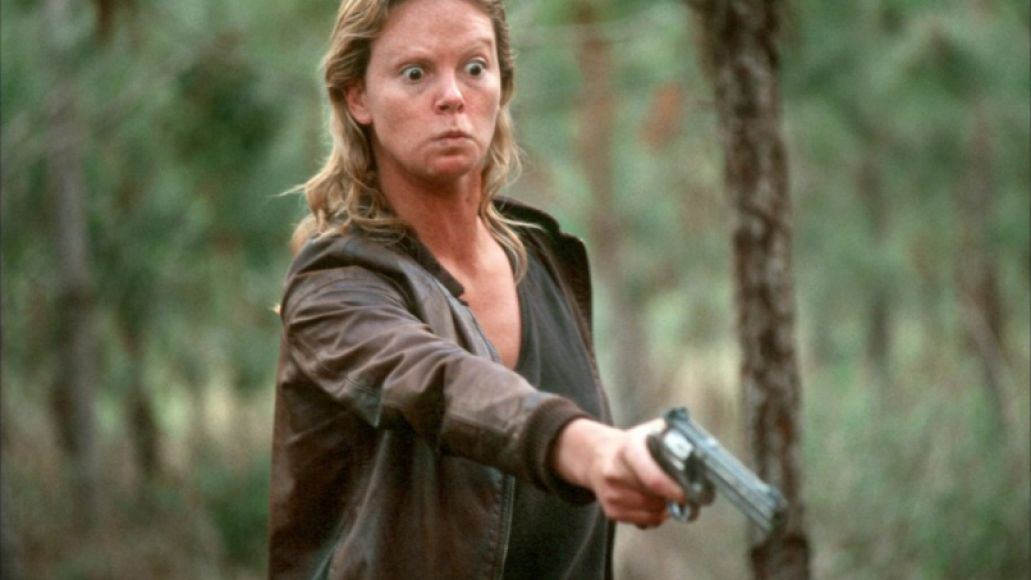 At the time of its release, the majority of the buzz around Theron’s Oscar-winning performance as the serial killer Aileen Wuornos grossly focused on the film industry’s collective awe that such a lovely actress could dress down like this! It’s a crass oversimplification of the transformation Theron goes in the role, and what Patty Jenkins’ unsettling drama accomplishes in both humanizing and interrogating the psyche of a murderer. The film explores the duality of a prostitute who was treated savagely by her world, but crucially, never condones her eventual descent into the entrapment and slaughter of several different johns. Theron’s work as Wuornos is nothing short of propulsive, closely examining the ways in which abuse turns cyclical, and how the hideous things people do to one another breeds more hideousness over time. There’s not a moment in the film that rings false in Theron’s hands, and even now, Monster stands as one of the great biopics of the post-2000 era, in large part because of her harrowing, unforgettable work. –Dominick Suzanne-Mayer