Whether or not, Kid Rock actually follows through with his threat to run for senate in Michigan is anyone’s guess. His Warner Bros.-hosted web store suggests KidRockForSenate.com is one big marketing stunt, though the singer himself maintains he’s serious about such an endeavor. And there’s reason to believe he’s telling the truth, because if he is to run, there’s a very good chance he’ll win. At least, that’s according to a Michigan-based GOP consultant who spoke with Politico.

“Presuming Kid Rock doesn’t get caught in bed with a little boy, or beat up a woman between now and August 2018, he’s going to win the nomination if he gets in,” Dennis Lennox told Politico. “I think there’s no question about that. I think he’s the prohibitive favorite if he gets in,”

Lennox’s comments are part of an in-depth story from Politico about Kid Rock’s potential run. Though the story’s authors, Tim Alberta and Zack Stanton, note that “not a single prominent Republican in Michigan has heard from Kid Rock or his associates about a campaign,” no one is taking his comments lightly — especially in the wake of Donald Trump’s own successful presidential run. And especially because Kid Rock’s path to the U.S. Senate is “far easier than Trump’s was to the White House,” they explain.

“Trump competed with 16 rivals for the Republican nomination, more than a dozen of whom were established, well-regarded, well-financed campaigners; Ritchie would enter a primary field of three little-known newcomers to partisan politics. Trump was targeted by a national network of influential donors and activists who laughed him off at first, only to mount a desperate scramble to thwart his candidacy once they realized their peril; Ritchie would face little such resistance in a state where primaries aren’t preordained by party bosses. Trump started his run with no obvious base or blueprint for victory; Ritchie would launch a campaign on the strength of his favorite-son status that cuts across socioeconomic boundaries and is particularly resonant with the president’s winning coalition of culturally conservative, populist-minded, blue-collar voters.”

The article goes on to note Kid Rock’s appeal across Michigan and why Democratic strategists believe he would be a serious threat to incumbent senator Debbie Stabenow — despite her formidable war chest and high poll numbers. The article also offers a breakdown of Kid Rock’s stances on various issues: 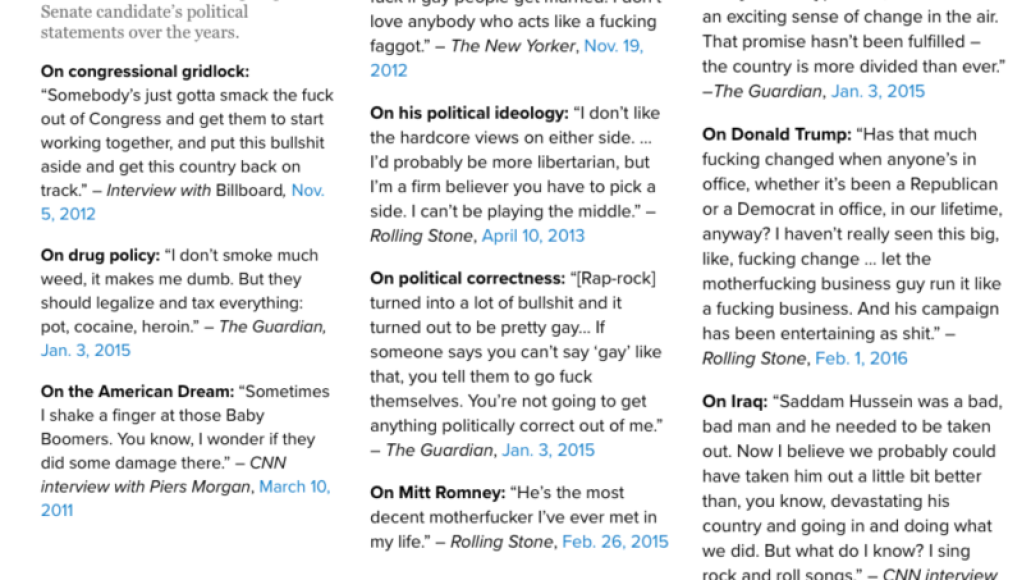 Alberta and Stanton end their story with the following anecdote,

“Kid Rock’s candidacy for U.S. Senate will be the manifestation of the left’s nightmare about what Trump’s election has wrought—and a fulfillment of unwitting attempts at humor. When Zach Galifianakis interviewed Hillary Clinton on ‘Between Two Ferns’ during the 2016 campaign, he asked, ‘When [Trump] is elected president and Kid Rock becomes secretary of state, are you going to move to Canada?’ If that feels eerie, consider that in the music video for his 2001 single ‘You Never Met a Motherfucker Quite Like Me,’ Ritchie opens a newspaper with an all-caps front-page headline: ‘KID ROCK NEGOTIATES PEACE AGREEMENT.’ He then tosses the paper aside with a smirk on his face.

“Nobody should be laughing now,” they conclude.

GOP operative: Kid Rock will win Senate primary as long as he doesn't "beat up a woman"