Welcome to Producer’s Chair, a mini-column in which Editor-in-Chief Michael Roffman offers his own career advice to artists and various figureheads in the film and music industry. In this installment, senior writer Randall Colburn short-lists actors and actresses who should be cast in Quentin Tarantino’s new project on the Manson Family.

On Tuesday, it was announced that Quentin Tarantino’s penultimate movie (should he adhere to his 10-film cap) would center around the Manson Family and the Tate/LaBianca murders. This is a bit of a surprise as Tarantino’s pulpy, comical, hyper-violent style could resonate as tasteless when you’re talking about real-life brutality (seriously, read 1974’s Helter Skelter — the definitive Manson chronicle — and then tell me you wanna see that shit onscreen). But Tarantino’s earned our trust by now, and we trust that whatever his interpretation is, it’ll be a striking one.

Along with the announcement were reports that Tarantino was already courting the likes of Brad Pitt, Jennifer Lawrence, Margot Robbie, and Samuel L. Jackson for roles. Sources say Pitt is being sought to play a detective and that Lawrence is not being discussed for the role of murdered Hollywood starlet Sharon Tate (that role is allegedly being reserved for Robbie). There’s no word as to who Jackson might play. And, frankly, we’re not sure, either. The Manson story is, more or less, a story of youth, while his major players tend to be a touch, say, long in the tooth.

That points to a story exploring the Manson Family from an alternative angle. What that is, who knows, but he’s still clearly going to need a top-notch cast to round out the family. And that gives him a unique opportunity to draw upon the deep pool of talented, young performers currently tearing up Hollywood. Below, you’ll find our picks for which of those young talents could very well play some of the story’s key players. Some you might find on the A-list, some maybe not. As a number of his collaborators can tell you, Tarantino can make anyone a star.

Our list doesn’t speculate on the intangible characters (the detectives never played much of a role in the narrative of the Manson Family Murders as we know it; sorry, Brad), but rather on those who played a key part in the tragedy. That includes the Manson Family, but also those who were drawn into their orbit in the years both before and after the events of August 8th and 9th of 1969.

And, yes, we still found a role for Michael Madsen. 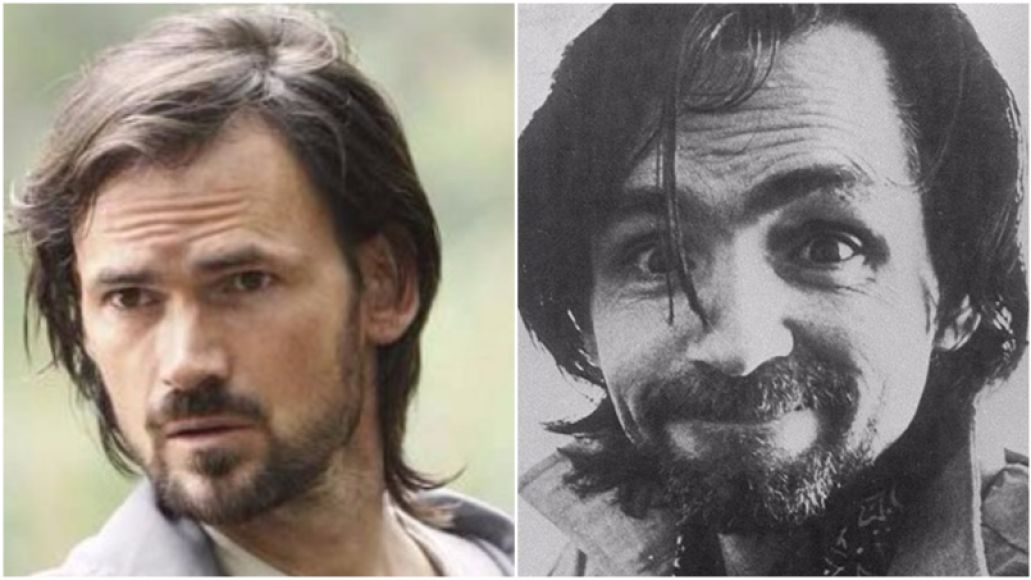 Why?: Because Jeremy Davies, who you probably remember as nebbish translator Cpl. Upham in Saving Private Ryan, already gave us a perfect Manson. When? In the 2004 TV remake of Helter Skelter, when Davies delivered a performance that found a bridge between Manson’s unhinged aura and his knack for calculated manipulation. So good was Davies’ taped audition for the role that it began circulating around Hollywood, a testament to the transformative power of a committed performance.

Sure, Davies is 47 now — Manson was in his mid-30s in the late ‘60s — but he’s always had a baby face. And that baby face, I should note, carries an eerie resemblance to Manson, so much so that’s it been friggin’ memed. Besides, anyone can be aged 10 years in either direction, but what other living actor could articulate Manson’s tics and cadence like Davies, let alone have the commitment to fully fleshing out one of the world’s biggest monsters?

It’s a wonder Davies hasn’t already worked with Tarantino. His onscreen persona isn’t unlike that of Tarantino favorites like Steve Buscemi and Walton Goggins, both of whom consistently defy and transcend the hyper-specific traits for which they’re known. The one hiccup? In his previous turn as Manson, Davies was often given the opportunity to improvise and rewrite, a privilege that would no doubt be denied by Tarantino. 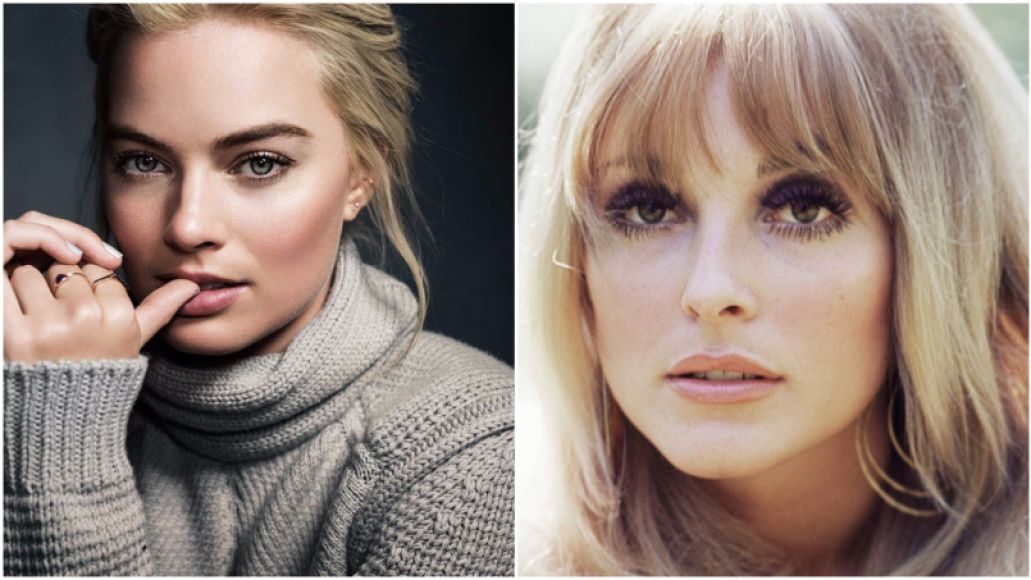 Why?: Rumor has it the Wolf of Wall Street and Suicide Squad star is already in talks for the role, and we’re hoping negotiations work out. Not only do Robbie’s striking looks and blonde locks evoke Tate’s, but the actress has proven adept at both comedy and drama, much like Tate herself. Also, Robbie’s experience being fetishized by both the media and the Hollywood cognoscenti is something that would no doubt benefit her performance. 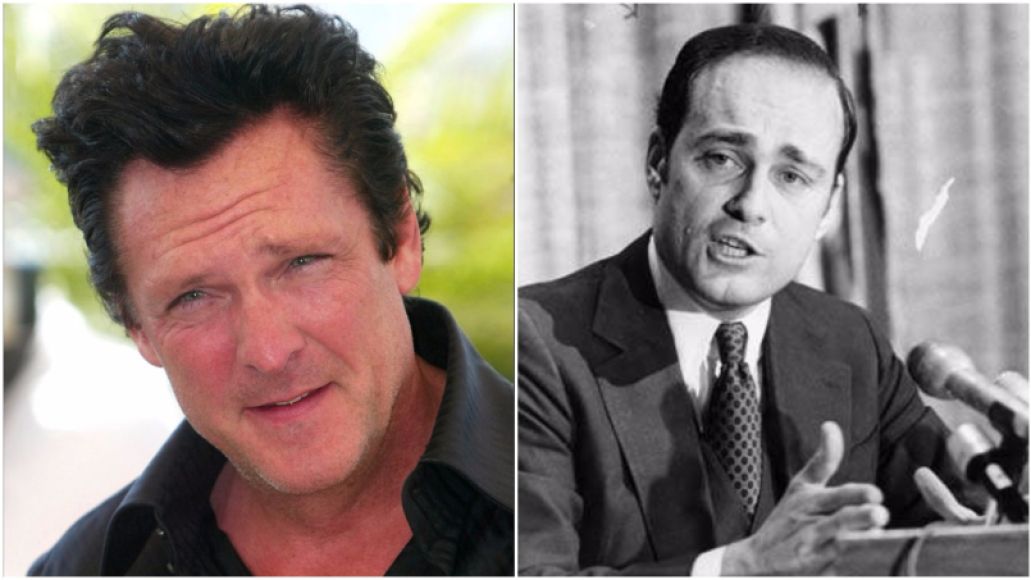 Why?: Because even the best Tarantino movies feel like they’re missing something without Michael Madsen’s rugged mug and rocky whisper. As prosecutor (and eventual Helter Skelter author) Vincent Bugliosi, Madsen would have the chance to dial back on the smirking menace he built his career on and be the good guy (and, in this story, he is the good guy).

Bugliosi’s journey is notable both in this story and in the field of law as he had to somehow prove Manson culpable for the Tate murders despite Manson not even being there. Madsen? A lawyer? A good lawyer? Never undersell that man. 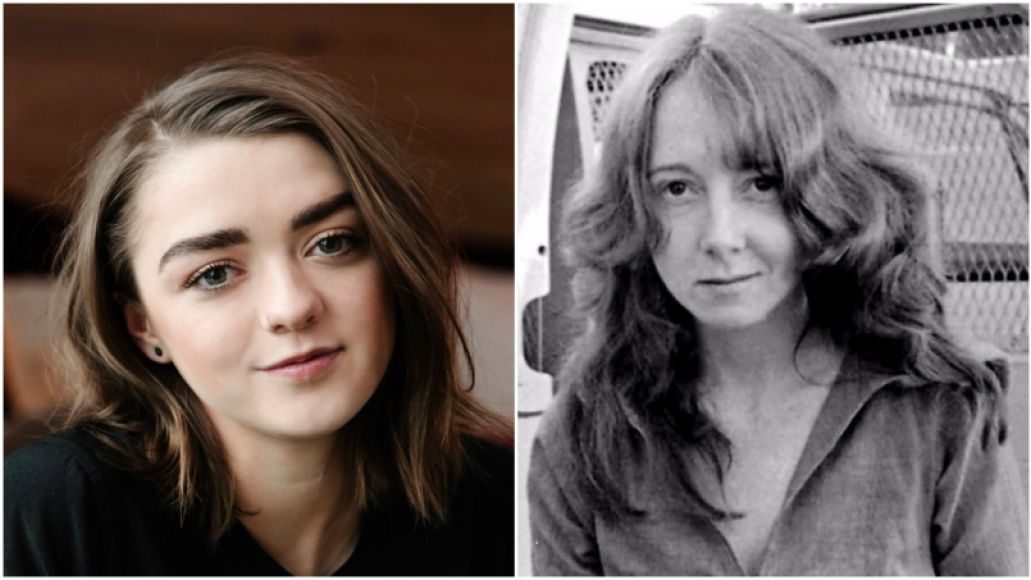 Why?: Lynette “Squeaky” Fromme was one of Manson’s most passionate believers, an outspoken firebrand whose intensity belied her diminutive stature. As Arya Stark on Game of Thrones, Maisie Williams established herself as a versatile performer with a ferocious edge, making her an ideal fit for one of Manson’s most memorable followers.

We haven’t had the chance to see Williams do much outside of Westeros, and a role like Fromme –who, having been a child dancer and performer, was particularly garish in her proclamations — would require a theatricality that’s been heretofore unseen in the actress. 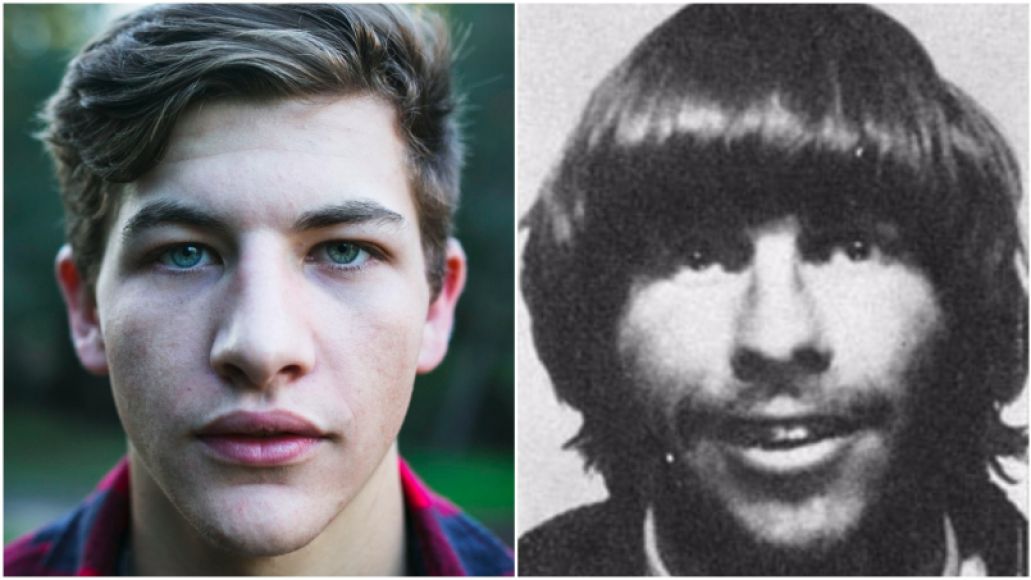 Why?: Tye Sheridan may look like a clean-cut, young lad, incompatible with Tex Watson’s shaggy malevolence, but Sheridan is both the right age and the right build for the role, and we’re guessing homeboy can grow a wicked beard. And it’s not like Tex wasn’t a hunk; dude used to be a frat boy. Often described as Manson’s “right-hand man,” Tex was a particularly bloodthirsty killer, having been present (and lethal) at both the Tate and LaBianca murders.

Sheridan’s worked with some amazing directors — Terrence Malick, Jeff Nichols, and Rick Alverson, among them — but he’s yet to reveal the darker edge of his psyche onscreen. Here’s one way to bring it out: Start reciting what’s sure to be the trailer’s centerpiece line of dialogue: “I’m the devil, and I’m here to do the devil’s business.” Would you believe this dude is a born-again Christian now? 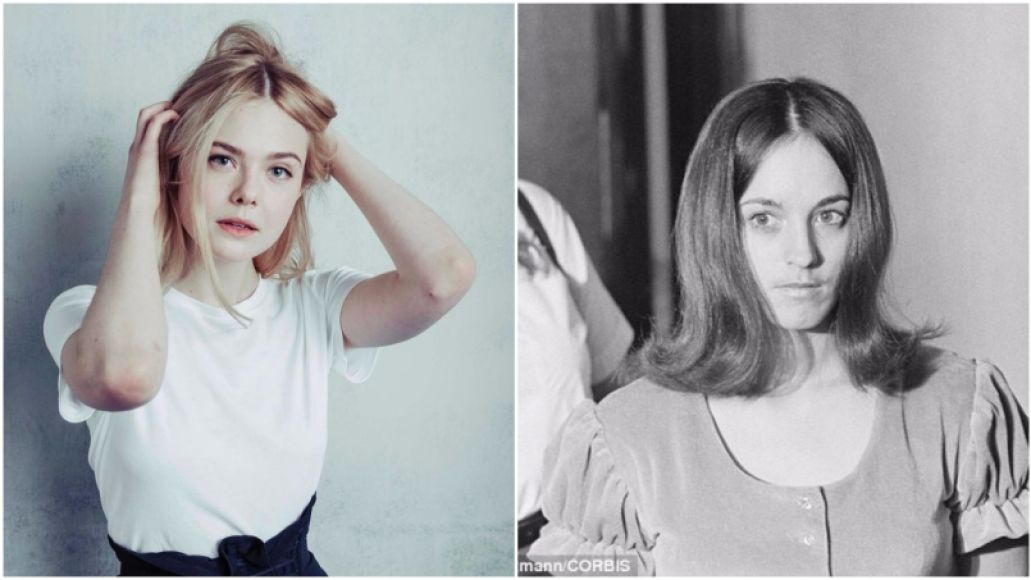 Why?: For one, Elle Fanning isn’t afraid of blood. She spent a good chunk of Nicolas Winding Refn’s The Neon Demon slathered in it. She’s not scared of much, frankly. Fanning just starred in Sofia Coppola’s spooky The Beguiled and is set to play Mary Shelley in an upcoming film, so genre is clearly in her wheelhouse.

As Susan Atkins, she’d be playing one of Manson’s most unhinged followers; Atkins played a pivotal role in the Tate murders, having taken a knife to pretty much every victim there and later scrawled the word “pig” on the wall in Tate’s blood. She also later confessed that she fantasized about cutting Tate’s unborn child from her stomach, but in the moment couldn’t conjure the courage. Fanning has demonstrated a striking ability to balance her surface “innocence” with complicated, and often dark, inner workings. 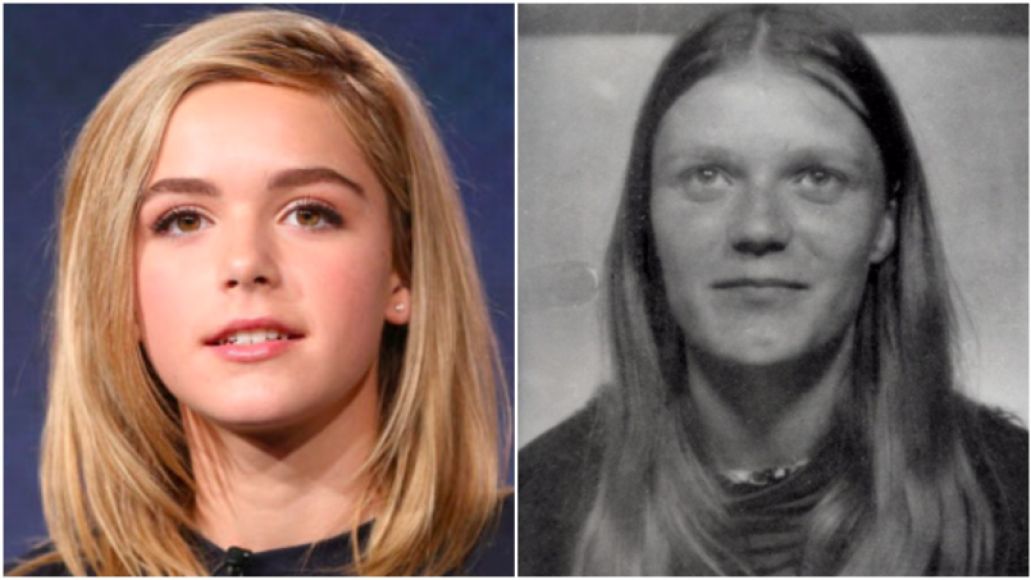 Why?: If there’s an audience surrogate among the Manson Family, it’s Linda Kasabian, who was an unwilling accomplice in the Tate/LaBianca murders and eventually served as the key witness for the prosecution. In exchange, she received full immunity, though there are reports she would’ve testified either way just to “get it out of my head.”

Kiernan Shipka, who came of age as an actress on Mad Men, has displayed a grounded quality in her acting that nevertheless allows room for mystery, which she exuded grippingly in this year’s The Blackcoat’s Daughter. Shipka’s ability to convey her brand of hopeful weariness (we saw it every time she looked at Don Draper in those last few seasons) would perfectly suit Kasabian, who, upon entering the Manson Family, was a single mother who had been rejected by her birth family. The character would require a delicate touch; Shipka may be young, but she’s got it. 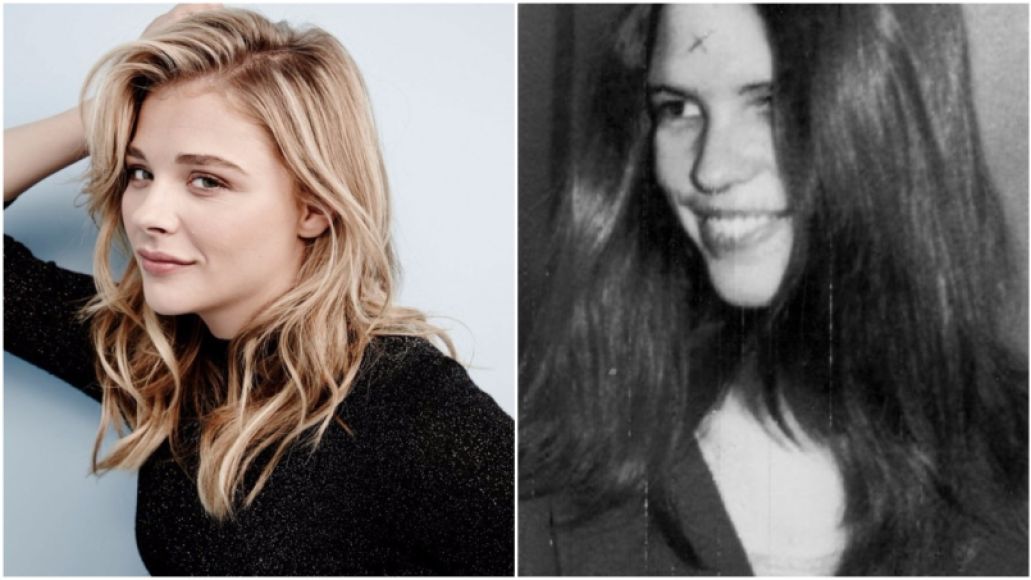 Why?: Out of all the women in the Manson Family, Leslie Van Houten is the one most fetishized by researchers. Not only was she beautiful, but she came from a well-to-do, churchgoing family; her turn to the “dark side” fascinates because few of the traditional environmental indicators were there.

Chloe Grace Moretz not only mirrors Van Houten’s beauty, but the confidence she exudes as an actress lends itself to a character that’s bold enough to swear off her past life and dive headlong into a psychedelic lifestyle. Van Houten’s story is also a portal into the Family’s use of LSD; she’s described being so “saturated in acid” that she could barely comprehend sobriety. Under such influence, her confidence soon veered into delusion, and it took years for her to admit the power Manson actually had over her. 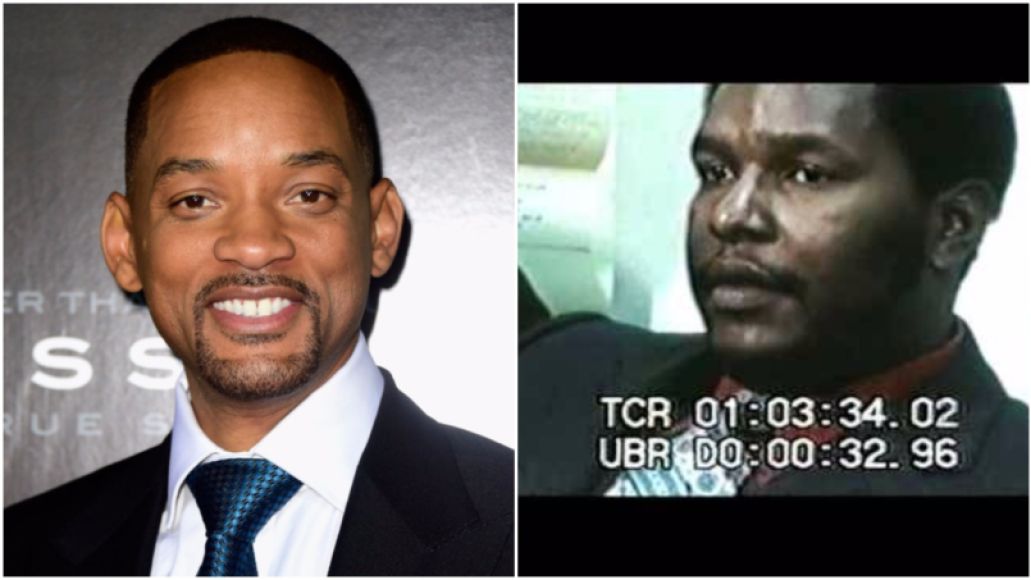 The Actor: Will Smith

Why?: Tarantino clearly wants to work with Will Smith, who he originally envisioned in the title role of Django Unchained, and, from a creative standpoint at least, Smith would benefit greatly from working with a visionary like Tarantino. As of late, Smith has more or less devoted himself to misguided passion projects (After Earth), sentimental drek (Collateral Beauty), and awards fodder (Concussion), which is a shame considering the dude clearly has the charisma and talent to still surprise. “Lotsapoppa” Crowe was a drug peddler who found himself in Manson’s crosshairs after a botched deal; Manson thought he killed him, but Crowe lived and his story became an integral factor in Bugliosi’s conviction of the cult leader. Crowe also serves as a vessel into Manson’s disturbed views on race, a topic that Tarantino will no doubt want to explore.